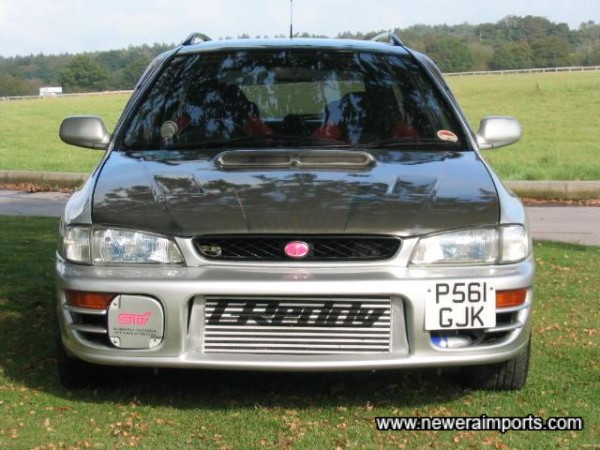 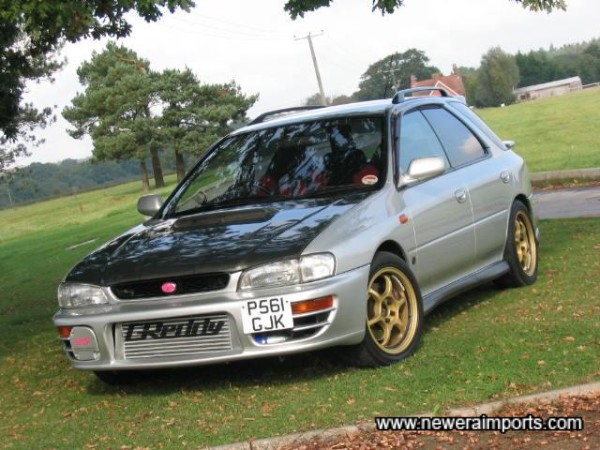 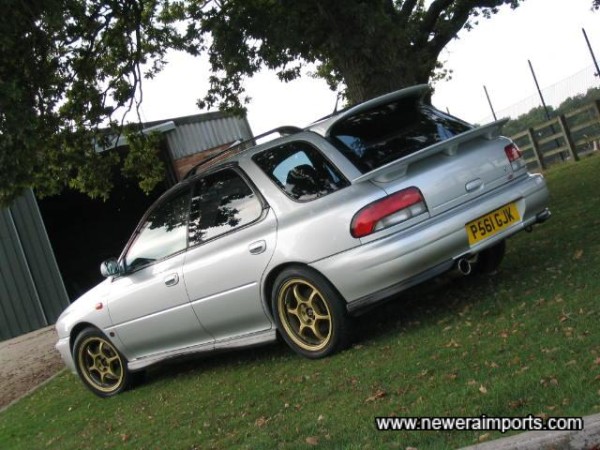 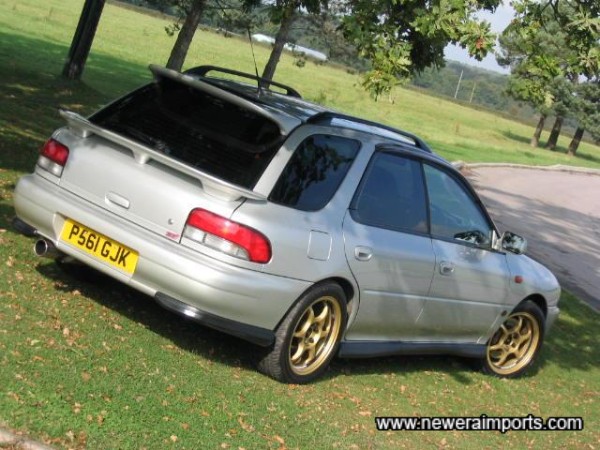 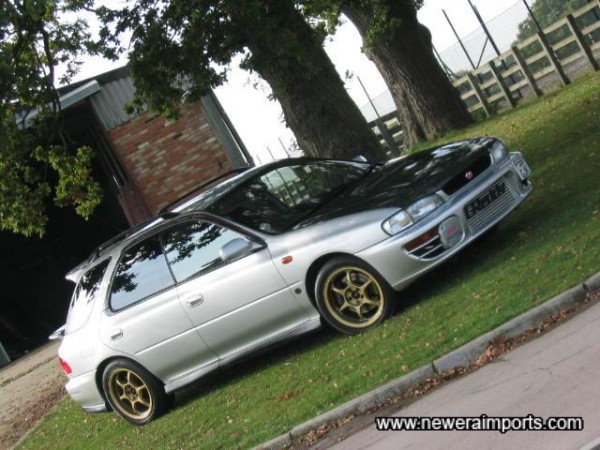 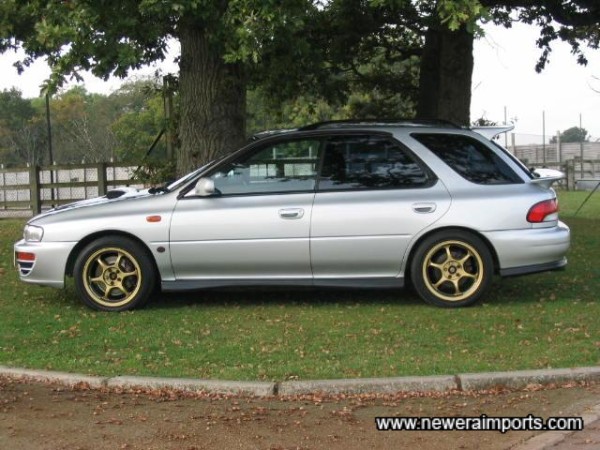 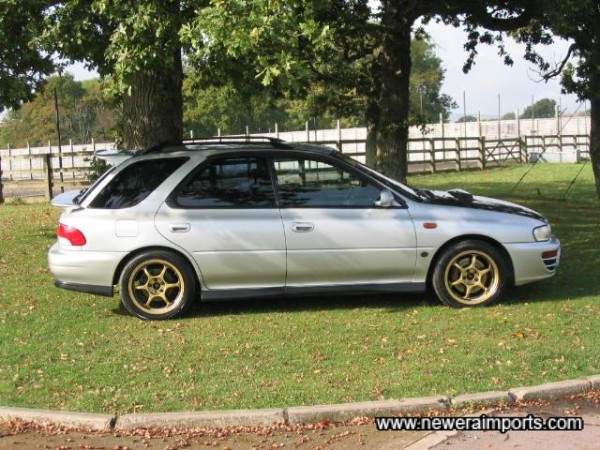 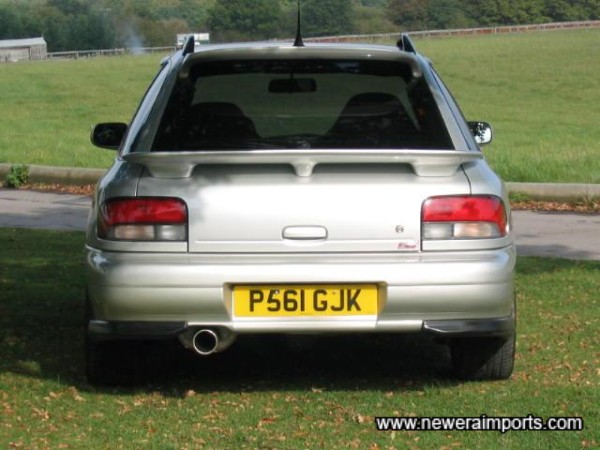 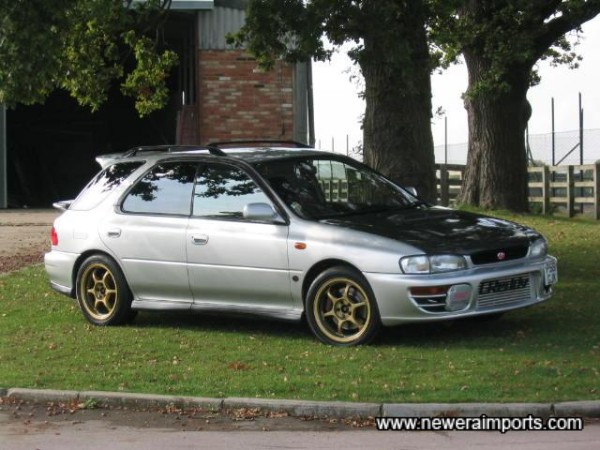 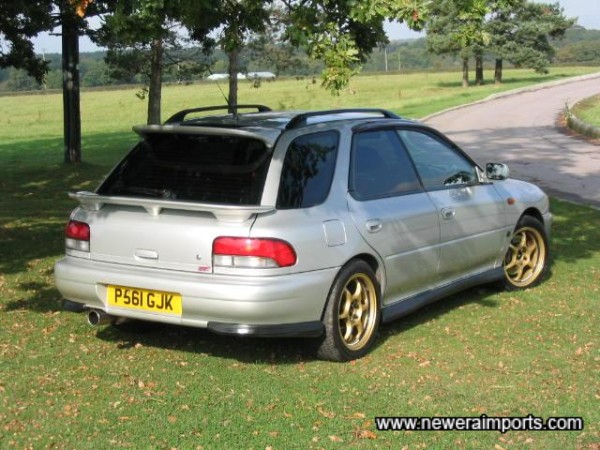 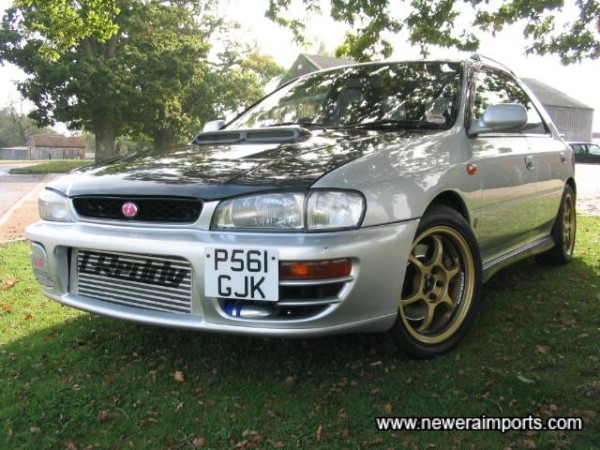 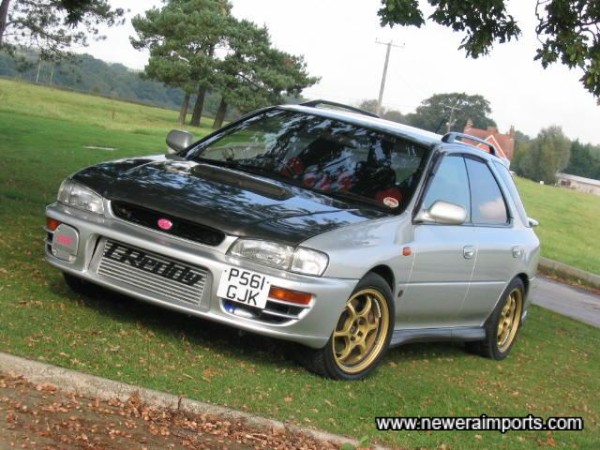 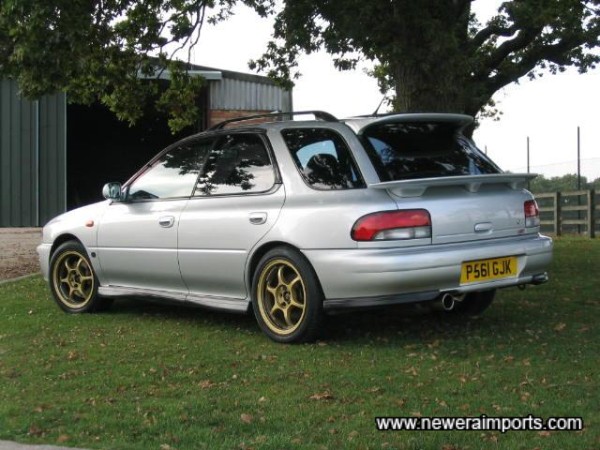 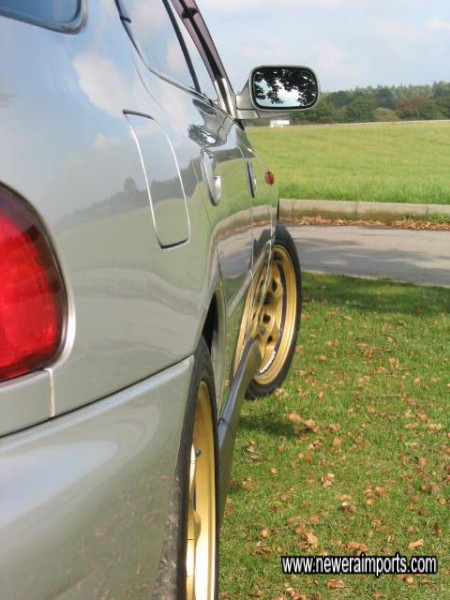 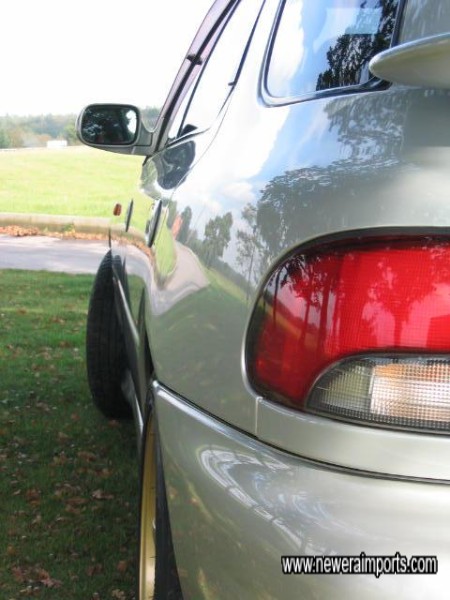 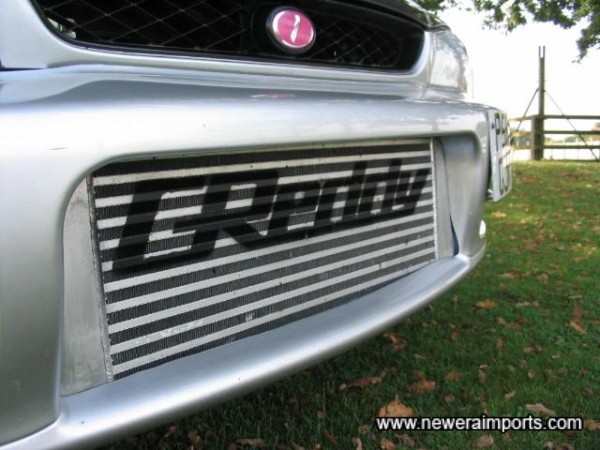 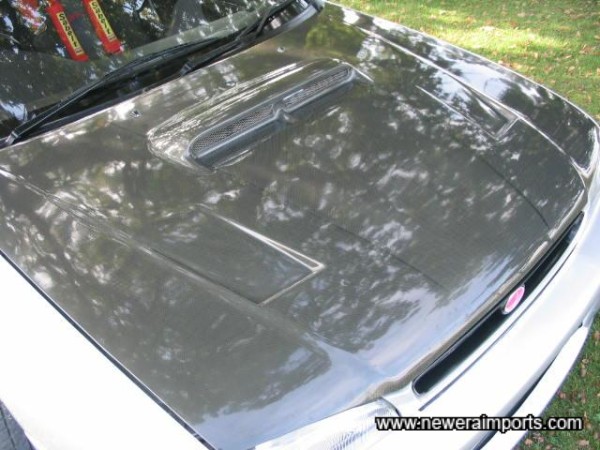 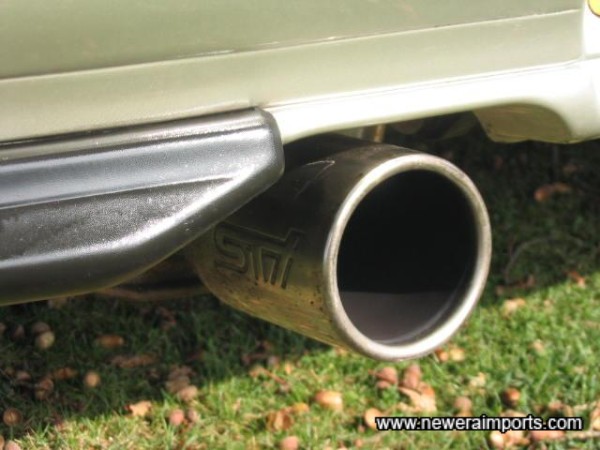 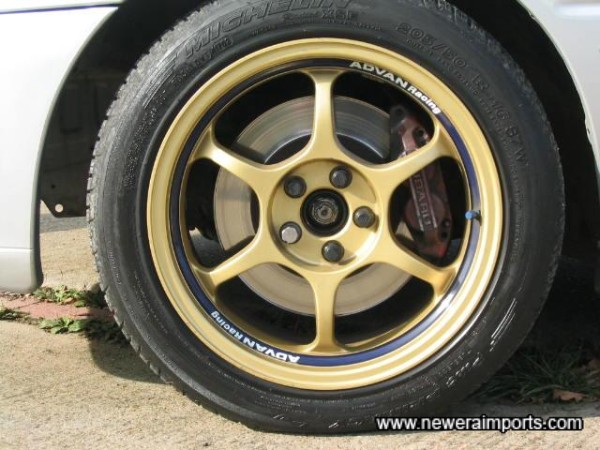 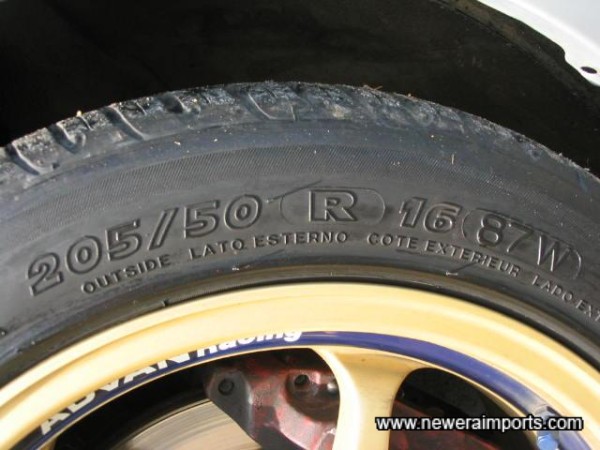 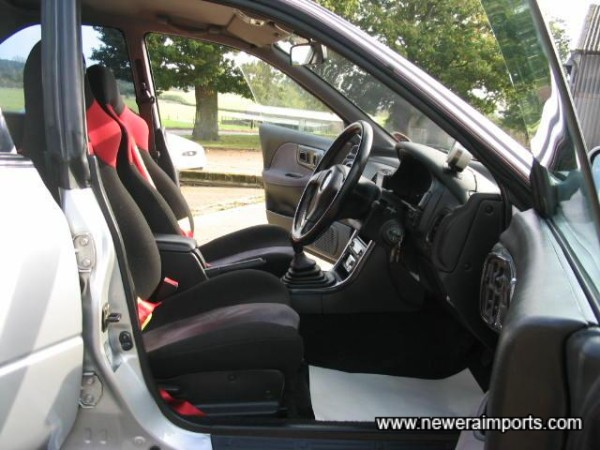 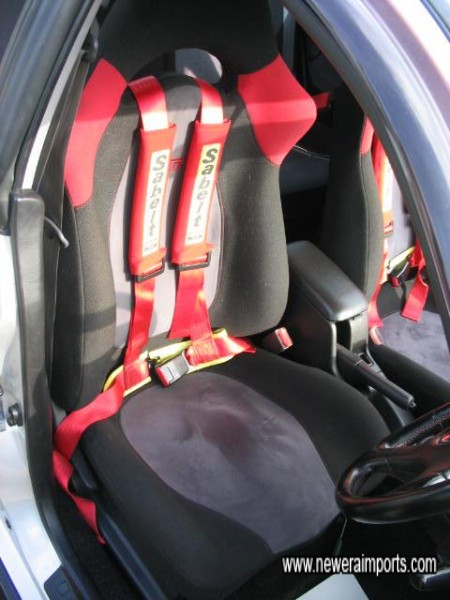 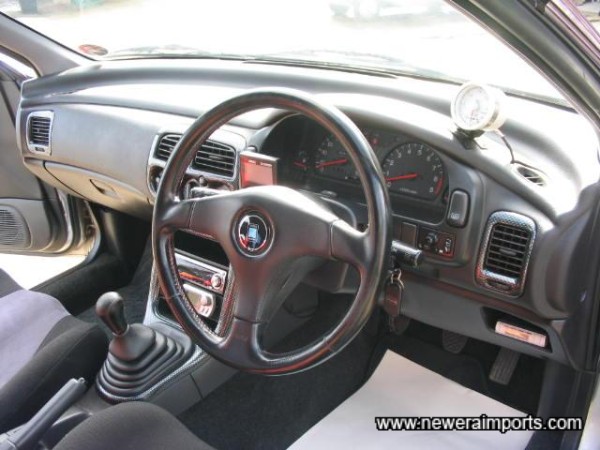 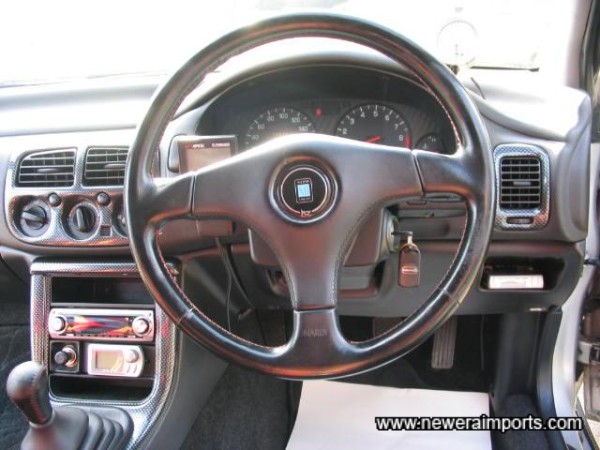 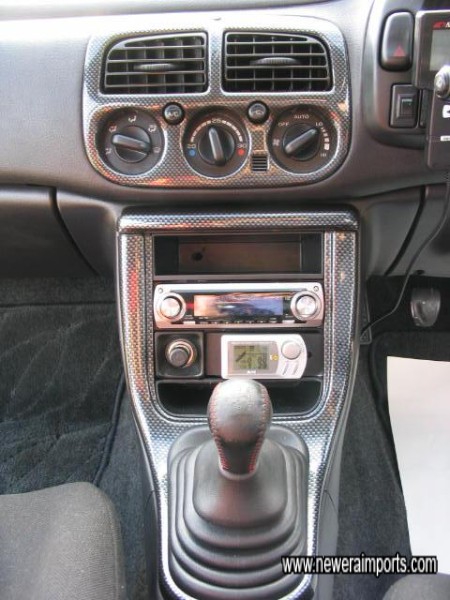 The STi Version 3 is one of the most interesting and capable of the previous model 5 door Imprezas. It was on the STi Version 3 that Subaru chose to introduce 4 piston signature front brake calipers. The engines are Sti Blueprinted units with stronger internals and an 8,000 rpm rev limit (Normal WRX's are 7,000) packing 280+ bhp as standard, with this example providing 380BHP on UK Fuel. The STi 3 is also distinguishable by it's updated facelifted front, light blue tint on windows, and the red and white rear lights, combined with the dual STi rear spoilers of a much larger design than non STi variants. The Sti 3 interior was also of a brighter design than previous versions, with embossed front seats, and Nardi/STi steering wheel.
Further mechanical improvements from Subaru included Sti uprated suspension, Sti carbon fibre front strut brace, full Sti Exhaust. Optional side wind-deflectors are also fitted. Hifi is a Kenwood CD/Radio unit. Original fitted mats are also included. Factory equiptment includes PAS, ABS, Climate Control A/C, E/W, E/M and factory tinted windows.
This example has been very carefully modified by Gareth Brunt who runs the UK workshop and is in fact his own personal daily car, now being replaced with an RA STi. The engine now develops 380BHP, confirmed on the rollers at GT-Art, running on Optimax. this is thanks to an Apexi Power FC ECU with hand controller making the most of the engine mods including 740cc injectors, fed by a walbro 255lph fuel pump, Front Mounted Intercooler, HKS De-Cat downpipe, STi exhaust, Apexi Induction. A Blitz SBC iD boost controller holds boost at a stable 1.3 Bar boost on the IHI VF22 turbocharger. To ensure smooth running the engine earth has been improved using a splitfire earthing kit. A Sard R2D2 Blow Off Valve looks after turbo stall giving a nice flutter at low boost and a purposful dump at high boost. A Blitz 1.3 Bar uprated radiator cap and billet alloy Zerosports oil cap are also fitted. To ensure all of this power is transferred to the road safely the standard STi clutch is retained with an STi shortshift aiding the gearchange. To ensure that the engine is allowed to cool down properly a blitz turbo timer is fitted.
Wheels are Advan Racing lightweight forged items (these are some of the lightest wheels I have ever felt!). The rear arches have been professionally rolled to allow these wheels to fit without the chance of interference between tyre and arch. The brakes are the standard 4 piston front calipers, with improved pedal feel coming from Zerosports braided hoses and dot 5.1 brake fluid to keep fade away.
The exterior is largely standard adding to that sleeper apeal. The bonnet has been replaced by a lightweight Carbon Fibre vented item. The front bumper has been modified to allow the FMIC to make the most of the cold air available, the number plate having been relocated to the side.
The interior remains largley standard other than a pair of Sabelt harnesses to keep the occupants in place. These can be removed if desired. A GReddy boost gauge allows the driver to monitor boost levels, whilst the power FC commander allows monitoring of many engine parameters including Detonation, Water temp, Intake air temp, Batt Voltage, Injector Duration, Speed, RPM, Air Flow in Volts and Boost pressure. The complete interior trim has also been finihed with a carbon look trim kit direct from Japan. This is easily removed if not to your tastes. The Stereo consists of a Single Din Addzest CD/Radio with uprated Addzest front speakers.
In keeping with how Gareth likes to maintain his cars this one also has been maintained to an unbelievable standard. In the six months that Gareth has owned this car in the UK it has had no less than 6 oil and filter changes all with Mobil 1 motorsport! He has also fitted a new cambelt with complete new tensionr assembly and all rollers with a crankshaft front oil seal at the same time to cure the small oil weap once present. At the same time the PAS fluid, Gearbox oil, diff oil, clutch fluid and brake fluid were all also replaced. The spark plugs have been replaced with NGK Platinum items.
In order to prepare this car for the salty UK roads the car has been professionally steam cleaned underneath before being oven dried and a complete underbody waxoyl treatment applied to avoid any unwanted corrosion. The rear foglamp has also been incorporated within the existing rear light units, avoiding and ugly bolt on lights.
to keep this car safe in the UK a Thatcham approved Cat 1 alarm has been fitted. This has been supplemented with a total closure and illumination package meaning that upon remote locking from the key fob any windows left down will be closed. Upon unlocking the interior lamp will be illuminated.
The only faults to report on the whole car are some light scratches to the passenger doors and a very small scuff to the n/s/r bumper corner. These are too minor to warrant repainting but are mentioned for the purpose of a complete description. Note that this car has not one single pin dent to report!
A very rare spec Impreza in excellent condition. Inclusive of MOT, Road Tax, 12 month's Quality Motorcare Warranty and a full valet just before collection, this car is priced at £7,950