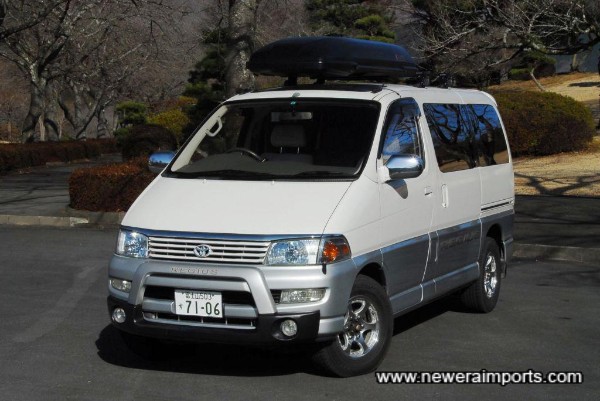 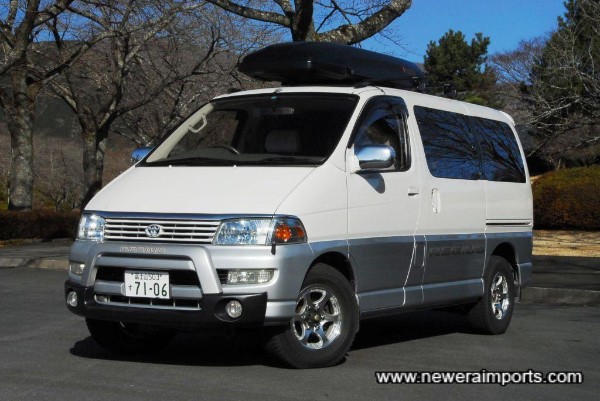 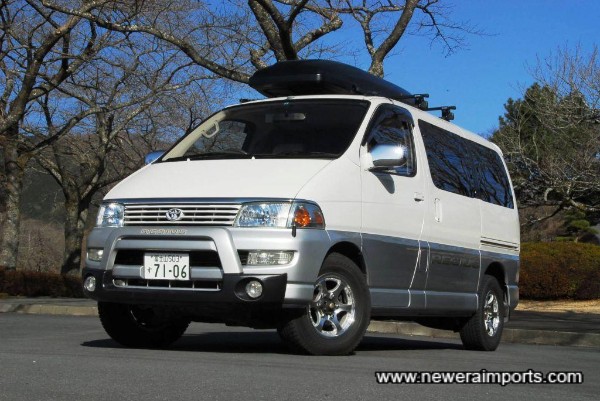 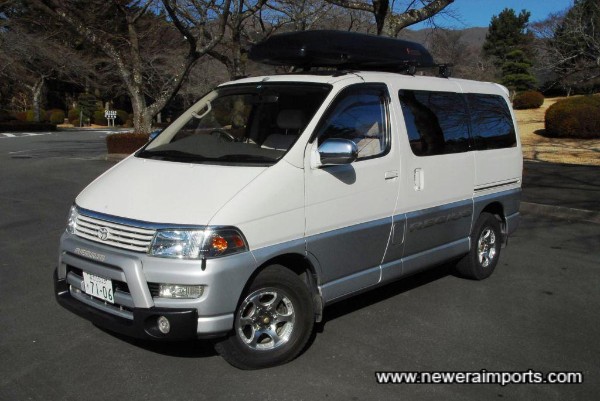 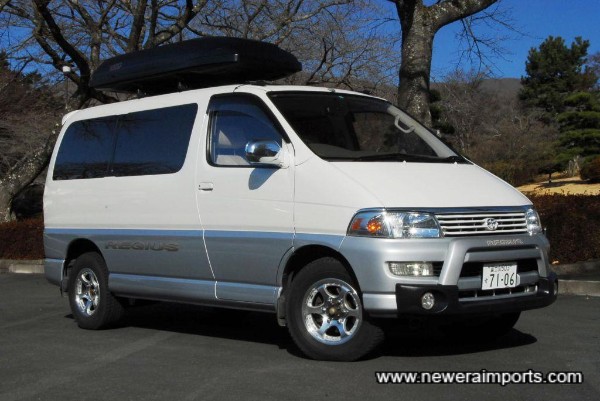 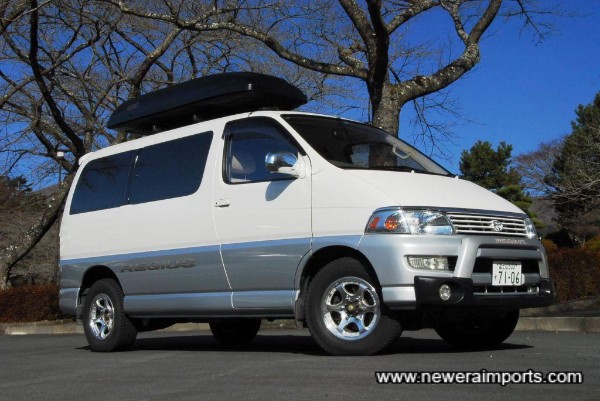 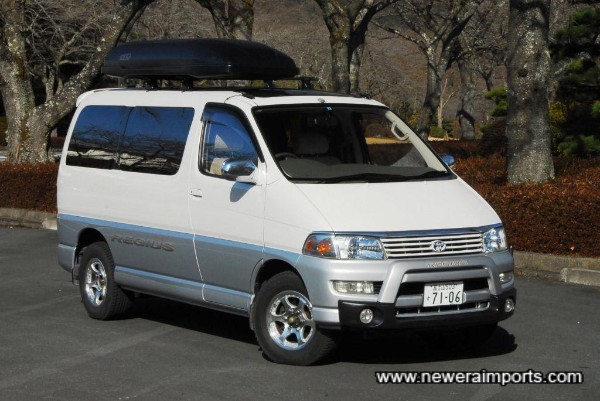 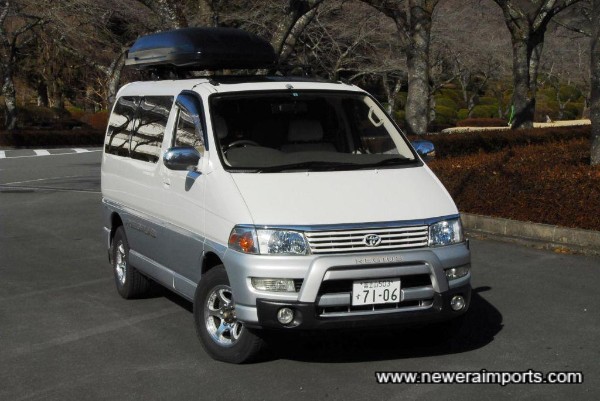 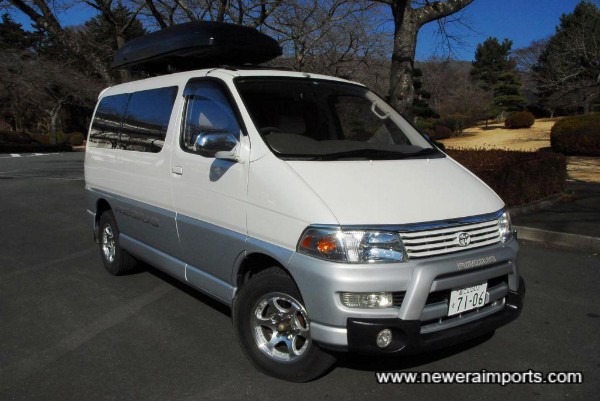 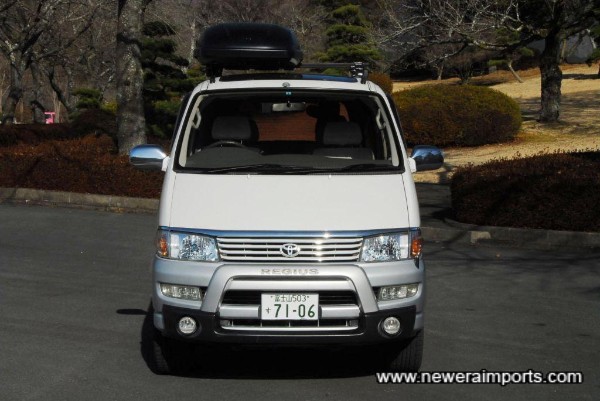 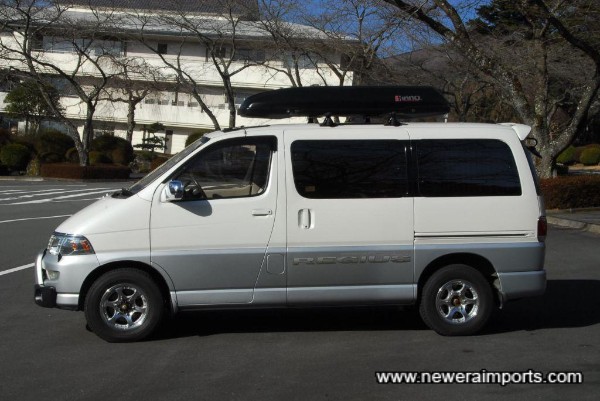 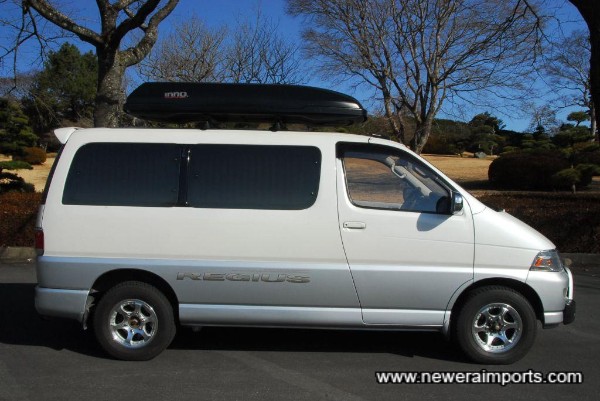 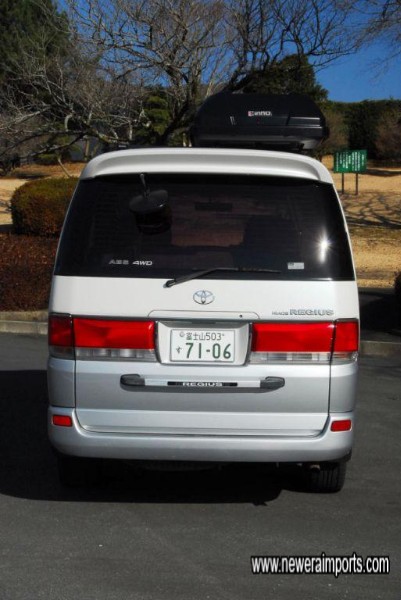 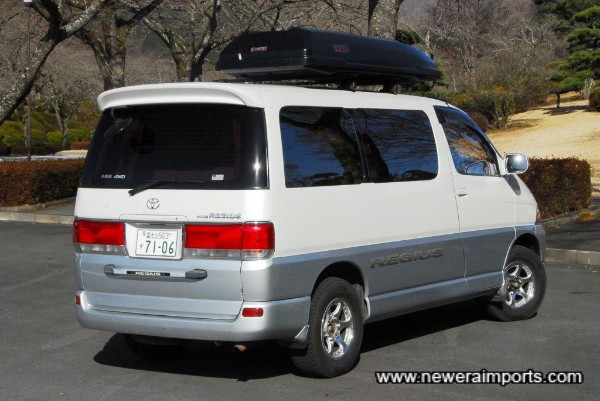 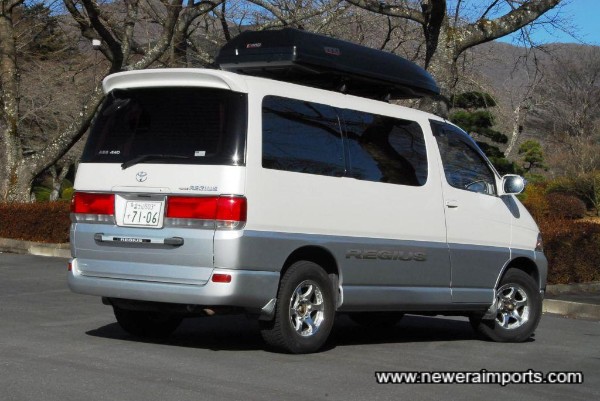 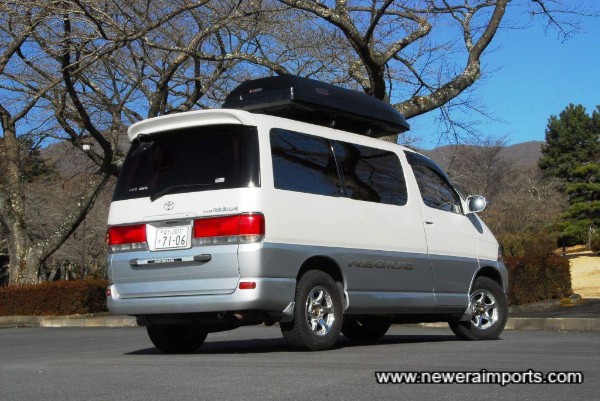 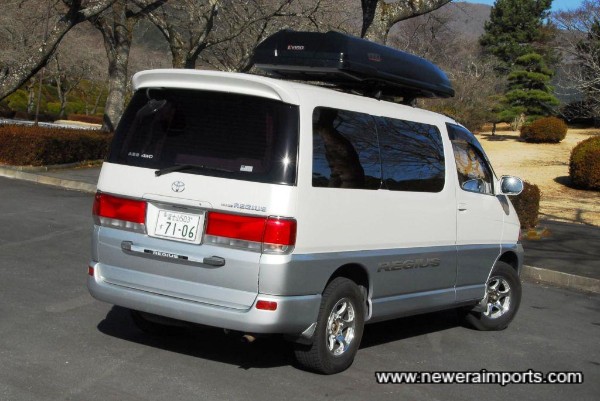 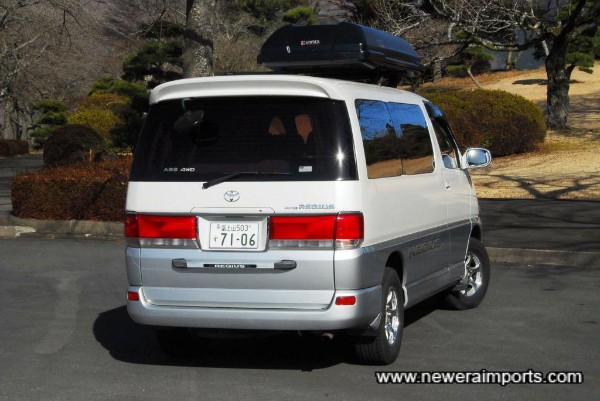 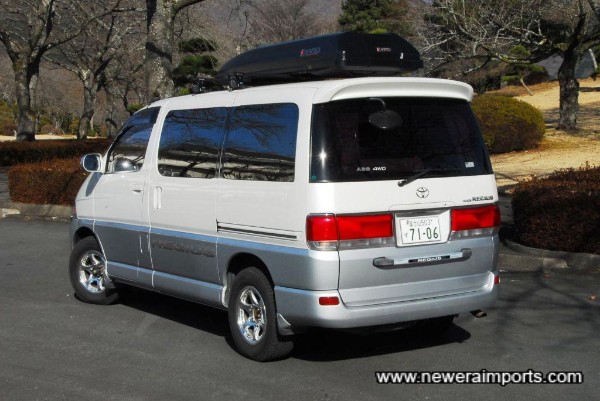 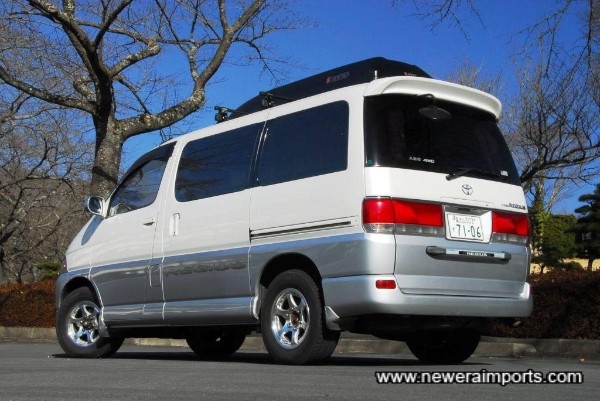 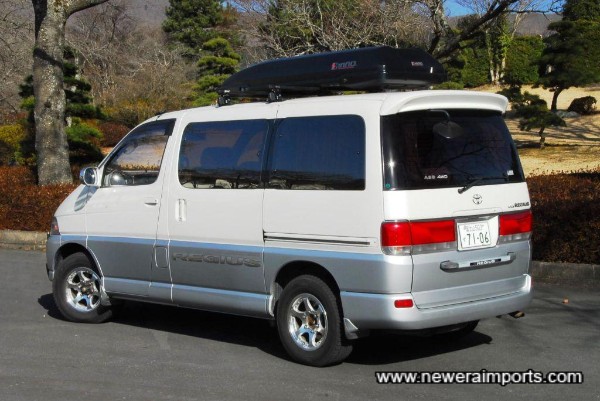 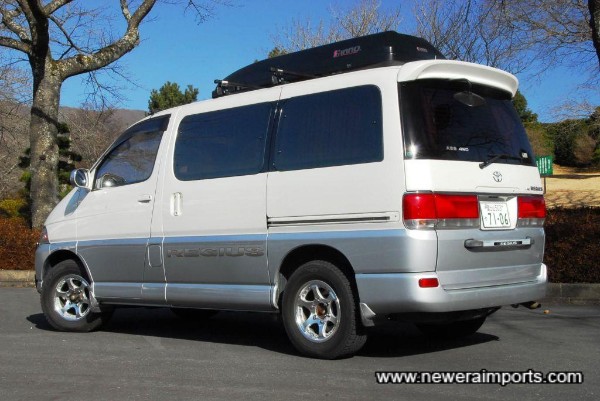 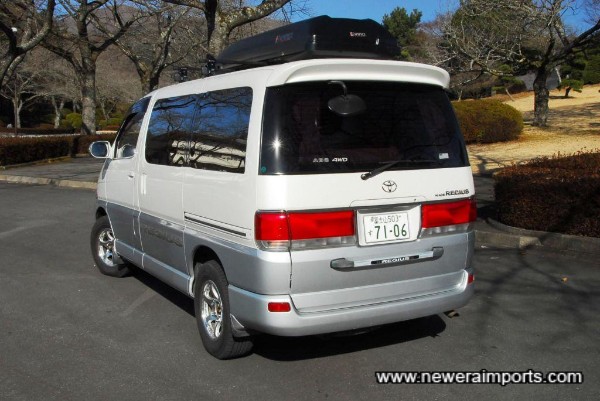 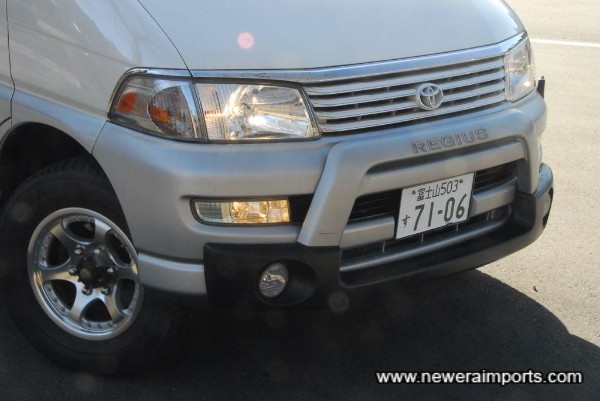 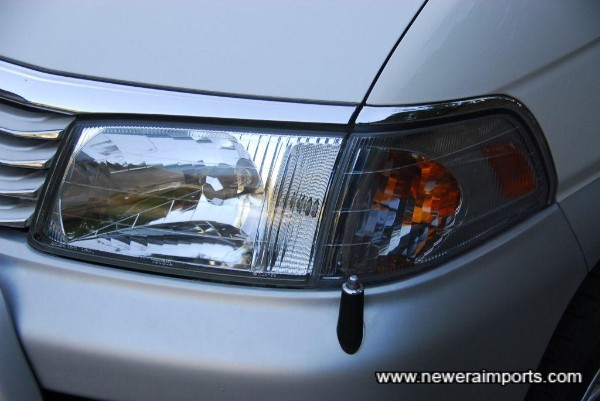 Until 1998, each of the larger Japanese car manufacturers offered a wide range of Turbo Diesel vehicles in the form of 4WD off road style and from the early 1990's Diesel People carriers too. After 1998 however, few Diesels were sold in Japan because of impending legislation thereafter to ban such cars from being registered in major cities. Such legislation is now in full force, which is one of the reasons Hybrid technology began to appear from Toyota & Honda from 1997 onwards (Prius & Insight being the first introductions from each manufacturer).
The Hiace Regius 3.0 Turbo Diesel was one of the last Diesel models to be released (From 1997) by Toyota - Japan's, if not the world's favourite car maker (For good reason because their cars are so well engineered and reliable). These were available in 2WD and as you see with this example - permanent 4WD.
This Hiace Regius is currently one of our company cars, in use for when we need to carry groups of people (Seats 7 in comfort for long trips & carries all luggage!) We find it particularly suitable for weekend hobbies such as camping, surfing, race team support and the odd trip through mountain roads to winter resorts. It takes it all in it's stride and returns 600km from a tank of 60 litres of Diesel - all whilst carrying 7 people in comfort. Because it's the most versatile and best equipped vehicle of it's type for the money - we chose it as a company car. It's now for sale - or we can supply an alternative example from our stock of hand picked family people carriers which we regularly source for UK professional customers.This example is the most sought after spec. of all equipped with full factory spec as follows:Specifications: 3.0 Turbo Diesel engine with permanent 4WD, ABS, Dual SRS airbags, Power Steering, Central Locking, Remote control door mirrors with retract mode, Automatic transmission with Overdrive and ECT (Electronic Control Technology enabling power / Norm settings), 7 seater with high seating position for excellent view, Swivel mounted front passenger seat so it can be adjusted to face the rear, swivel adjustable mid seats. velour seat finish (In excellent condition throughout), original option Toyota half seat covers, slidable rear seats for maximum versatility, full fitted mat set, twin electric sunroofs, electric curtains & full privacy glass for all rear occupants, Dual Climate control A/C & heating, Rear wiper, reversing mirror, high level rear spoiler, uprated alloy wheels, original option front nudge bar & chrome trim, Interior veneer finish trim, side wind deflectors, Chrome mirror covers, electrically retracting parking antenna. Note that original Toyota audio will be substituted for the currently shown modern Japanese HD Navigation / ICE system). Both the side & rear doors pull themselves closed fully automatically - the rear only when it's brought down. The side door can also be operated by the driver by pressing a button to open / close. Specification is immense! Condition: Having been a non smoker's car, there's none of the burn marks often found on the seats of used Japanese people carriers and combined with the low genuine mileage, interior condition is excellent throughout. Most importantly the underside of this car is also completely rust free - meaning with such low mileage and being a tough Toyota design, there's no reason this versatile family car shouldn't last another decade if it's well looked after.
Test Drive: This car is currently used by ourselves in Japan as a company people carrier and is regularly serviced, polished and interior cleaned. There are no faults at all to report. Car drives very well, with notably low rpm's at motorway speeds - a feature given by the fitted overdrive system (Original equipment on this model). Currently this vehicle is in regular use - but we are sourcing others of similar spec. to offer from our stock shortly. This particular example is offered with full UK registration, 12 month's MOT, 12 month's comprehensive warranty at £8,695 t us for further details on how to reserve. A deposit of £1,000 secures.Newera Imports - widely recognised by UK clubs, tuners and trade as being the premier choice for high quality hand picked vehicles from Japan. Nobody does it better!