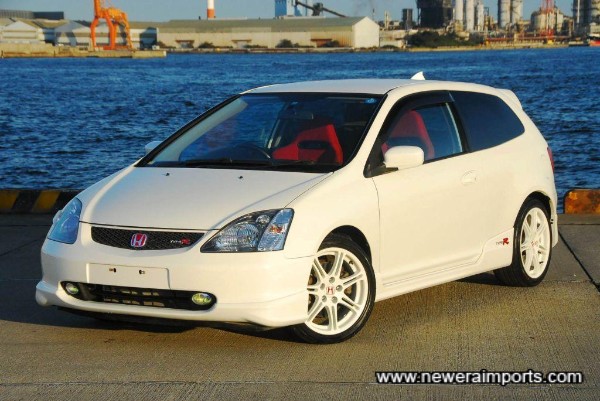 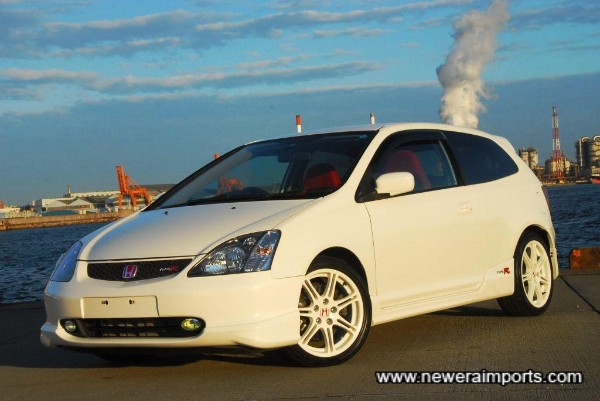 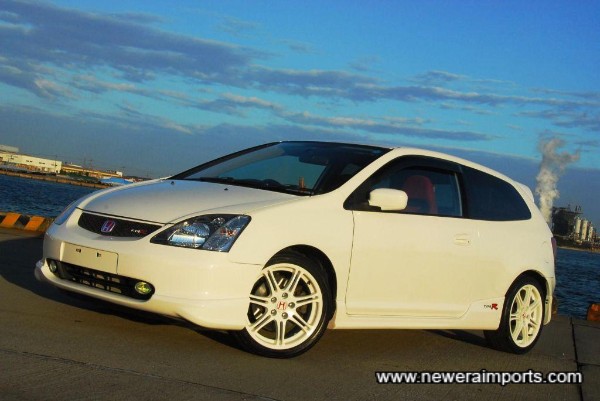 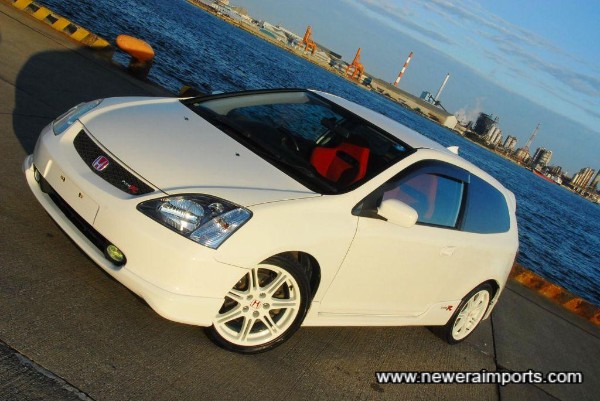 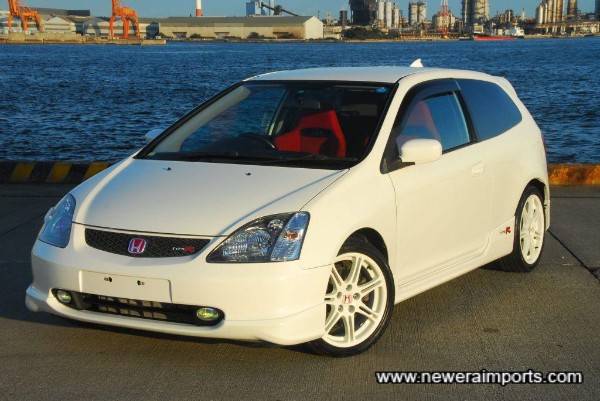 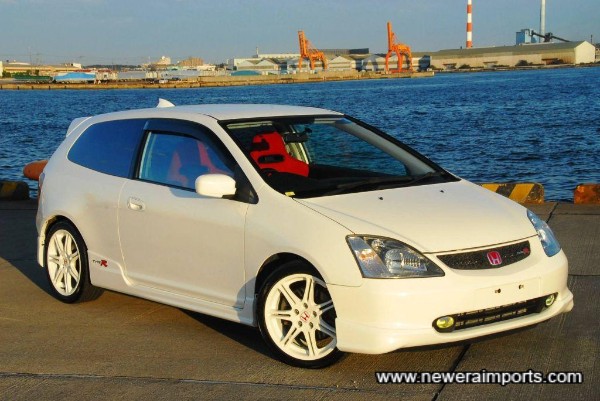 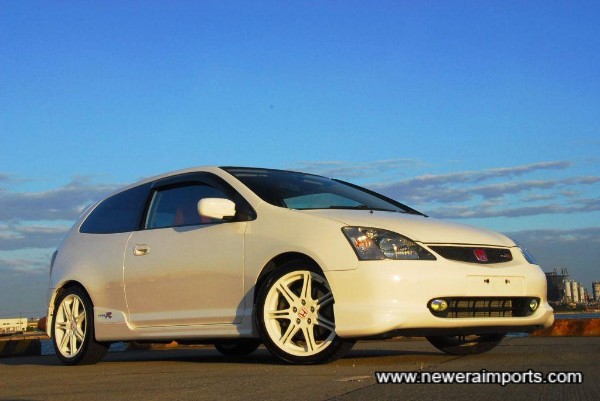 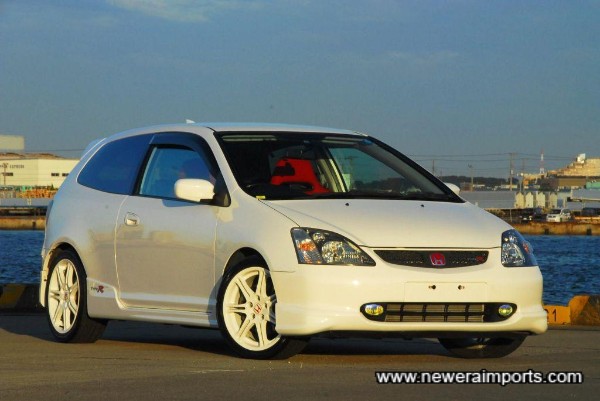 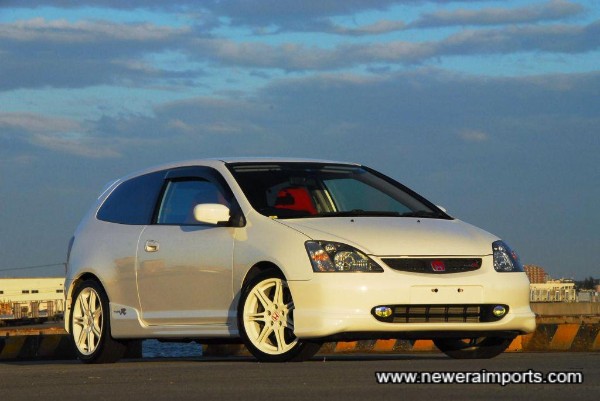 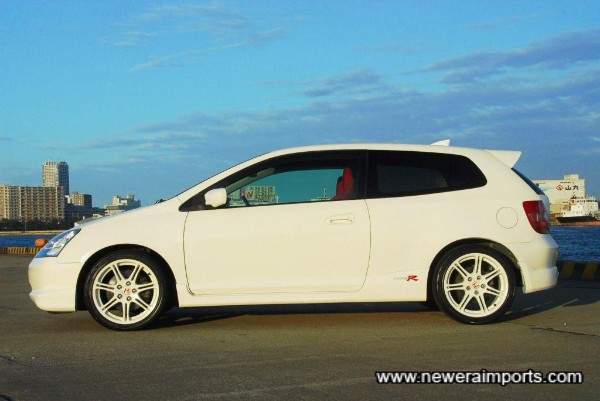 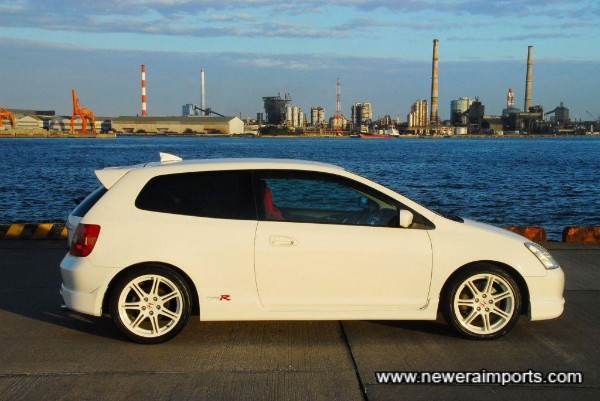 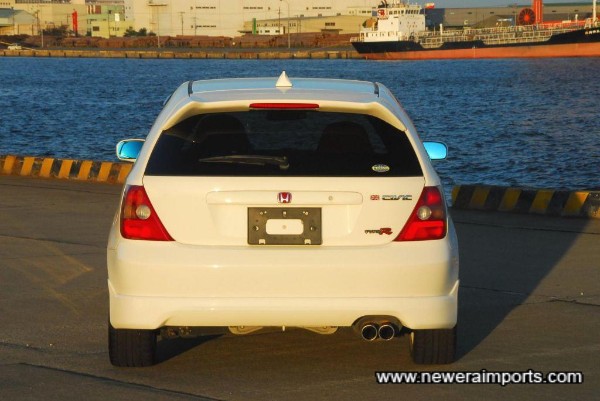 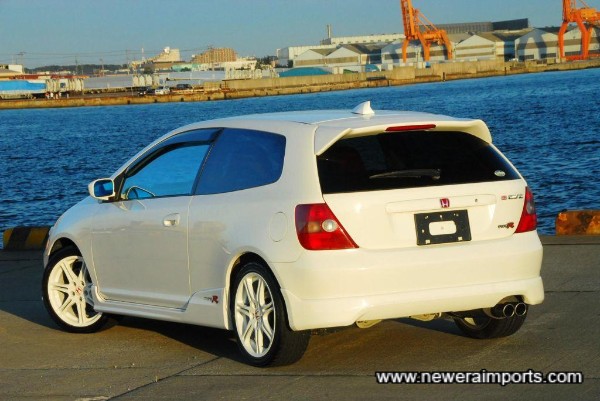 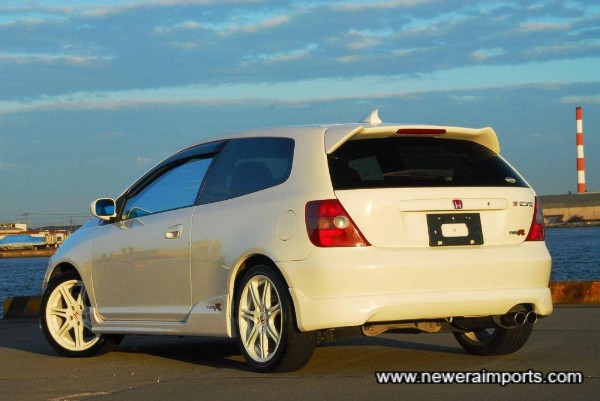 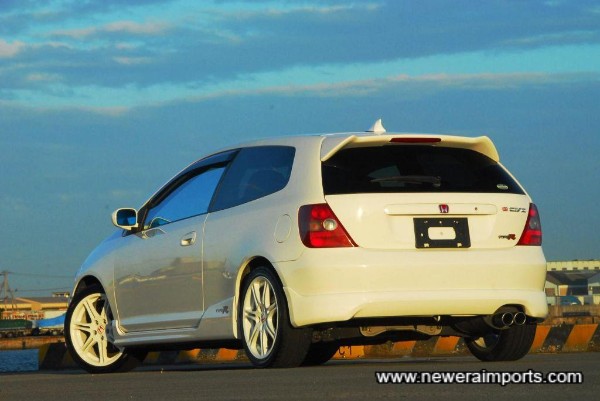 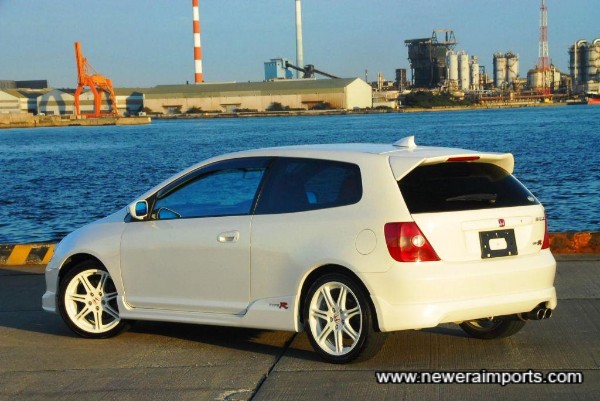 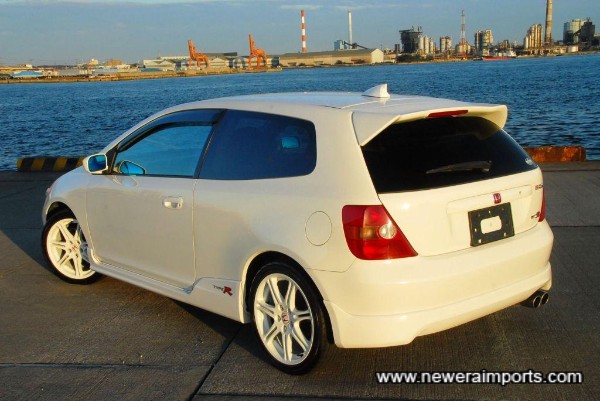 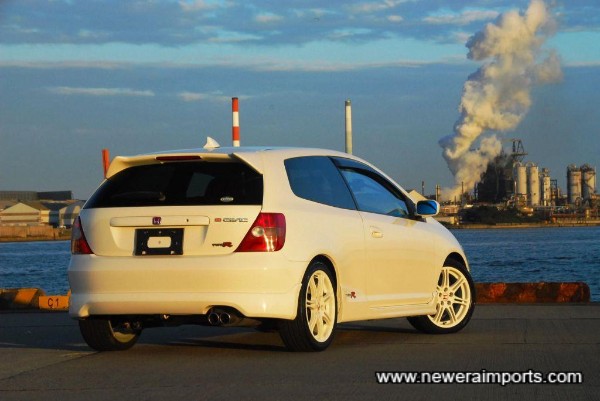 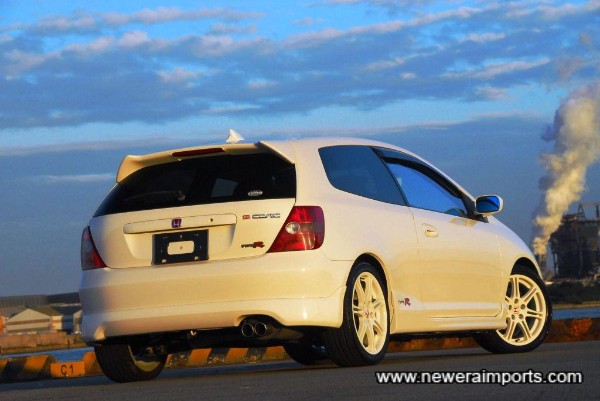 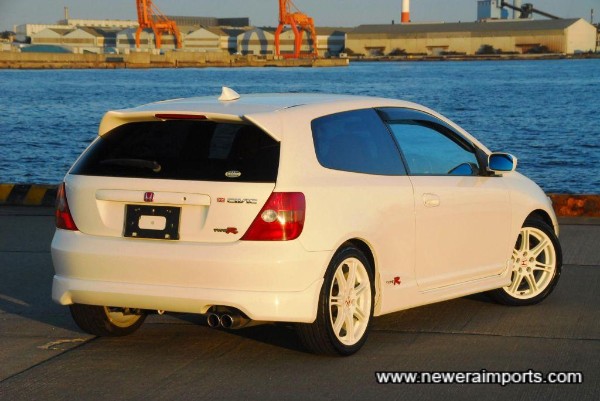 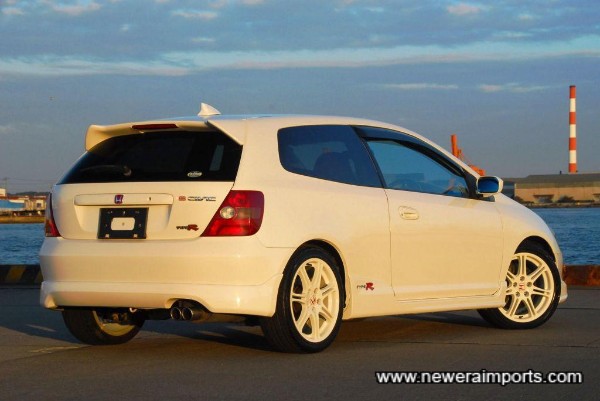 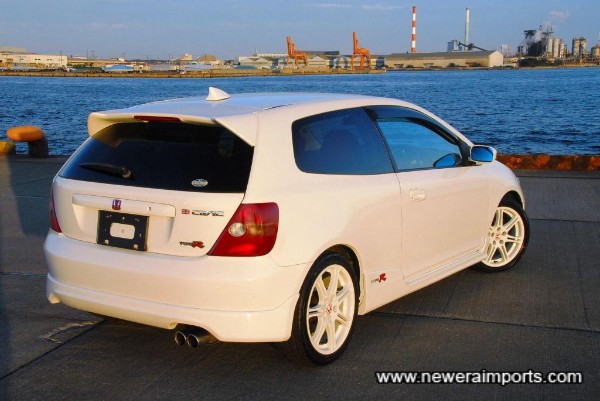 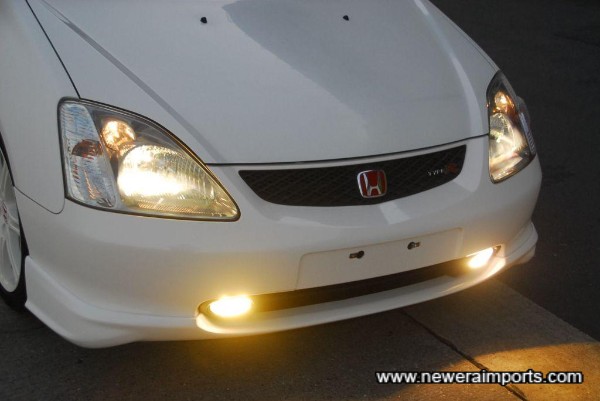 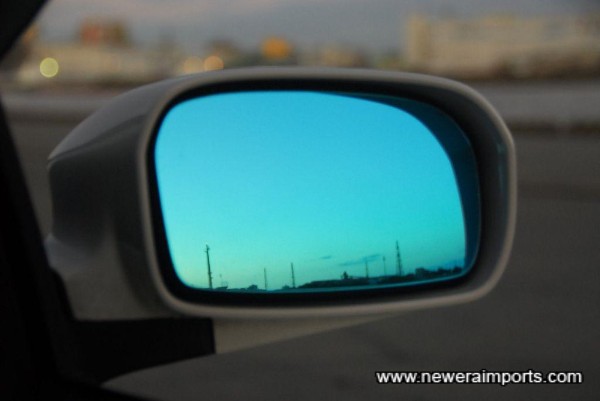 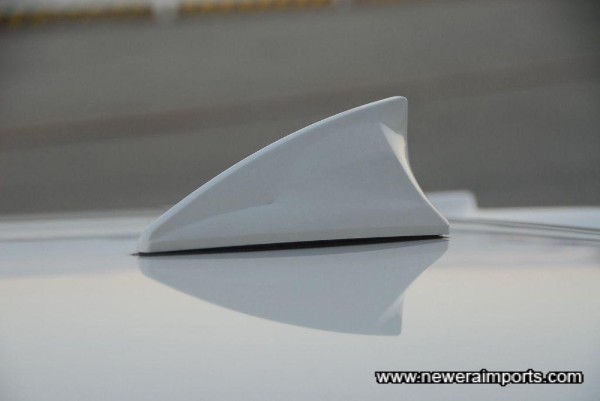 This Civic Type R EP3 JDM spec was sourced to special order for a die-hard Civic enthusiast who wanted not just JDM specification but a car in as low mileage top condition as possible. The result is seen below. This example's so tidy, it looks as if it's been stored away most of it's life. Condition is outstanding! Specification includes: i-VTEC 220 bhp 2.0 engine from Honda, these are superb award winning engines. Honda being the pioneer of variable valve timing technology - knows better than any other manufacturer how to make an N/A sports engine to entertain yet still meet all the modern emissions standards and be 100% reliable. This engine really is superb in every respect providing ease of driveability, good fuel economy with unbelievably strong and intoxicating power from the 2.0 DOHC when required, all the way to the 8,600RPM red line. Fitted with powerful vented disc brakes, torque responsive helical limited-slip differential, 6 speed close ratio gearbox, PAS, P/W, air-conditioning, 4-channel ABS, Dual SRS Air Bags Momo leather covered sports steering wheel, original titanium shift knob, red Recaro front seats, original type R fitted mats, privacy rear glass, light tint front windows, optional window/door visors, high level rear spoiler with integrated brake light, original option bumper recessed driving lights, factory alloy wheels fitted with 205/35R17 Yokohama DNA sports tyres (Nearly new). Auction grade 4.0 .... EP3's imported from Japan don't get much better than this in terms of condition.It's absolutely original throughout and interior is also in excellent original condition with no faults to report, aside from a couple of very small marks on the left horizontal bolster of the driver's seat and minor dirt on the edges from the driver getting in and out. Unusually for a sports car, this has been a non-smoker's car since new so the interior has been further preserved through careful ownership.
Note there was a JDM only sat nav system of older design (As originally fitted when new). As this isn't usable in the UK we have replaced with a high quality 2 DIN 200W Kenwood system. Paintwork quality: There were some scratches on the driver's side skirt and also to the front lip. These were professionally repaired at our designated paint shop in Japan before shipping. They also carefully touched in the light chips / scratches on the wheels and even left a touch up bottle hidden under the central drinks holder. Ideal as it's a perfect match for the wheels and bodywork. Note There are a few very small stone chips on the bonnet, but these are so small they're not large enough to use a touch up pen on.The passenger door's been re-painted before (Match is perfect) and there's a small pin dent on the n/s quarter in location shown in pictures. These are too small to require repair, but mentioned to give a full report.
Test Drive: We had the opportunity to drive this car approximately 40km and so got the chance to really evaluate it's performance. We're pleased to confirm it drives absolutely perfectly. Nice strong performance, especially above 5,800 rpm where iV-Tec's benefits come into play. No gearbox synchromesh wear problems, nice clutch feel (Not worn out), good braking performance and nice, tight firm suspension. Car's geometry also feels spot on with no wandering or signs of looseness. It's clear from it's condition and the way it drives, this car's been beautifully cared for and maintained. It's quite possible this will be one of the best EP3's in the UK shortly. Civic Type R's have always been popular performance cars in Japan holding their prices well and the EP3 JDM spec continues to be a popular choice with enthusiasts in Japan for good reason. With Honda engineering, it's a very reliable package indeed, comprising a delightful direct close ratio 6 speed gearbox, handling braking that puts other so called "hot hatches" into the weeds! These Integras corner as if they're on proverbial rails! Now with the ever higher road taxes for newer cars it makes sense to have a cheaper road tax bracket 2001 model. Bear in mind the condition of this car is equivalent to that of a 2 year old UK car. There's absolutely no underside corrosion, no significant mechanical wear, no oil leaks, etc.
With the EP3 Civic, there's economy when you want it class beating performance and handling when the open road beckons. Understated, subtle and purposeful in apperance, yet practical and endowed with Honda Type R performance and reliability.
Including all for compliance, full UK registration, road tax (6 months), 12 months comprehensive Car Care Plan warranty and full valeting: OTR Price: £10,365 Newera - Consistently recommended by club members and tuners in the UK - for supplying the best hand-picked imports to order and from stock!