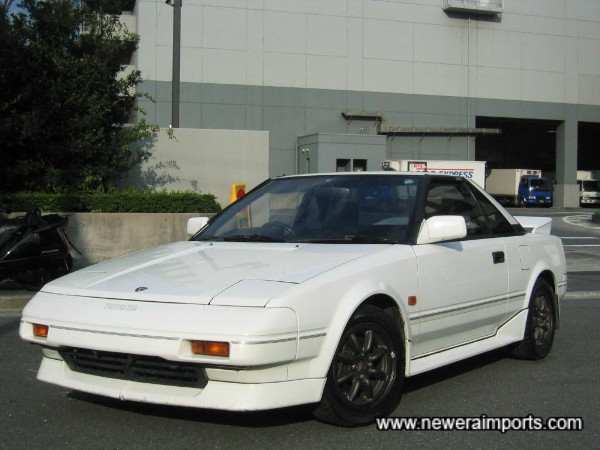 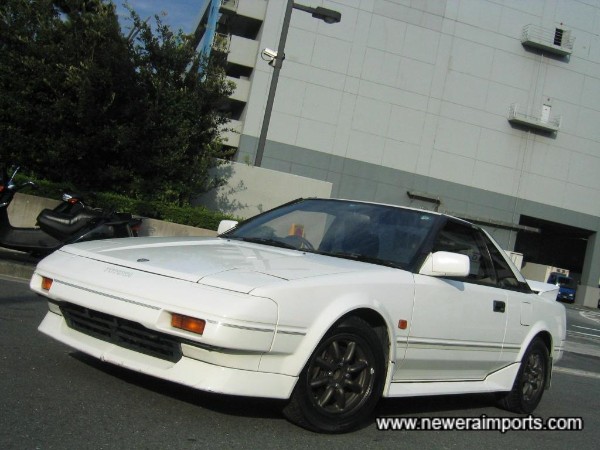 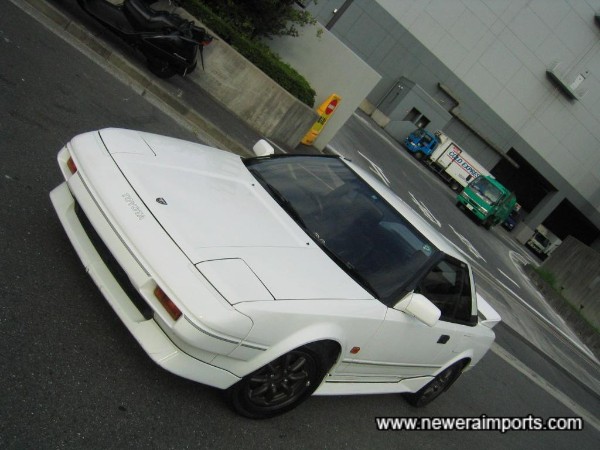 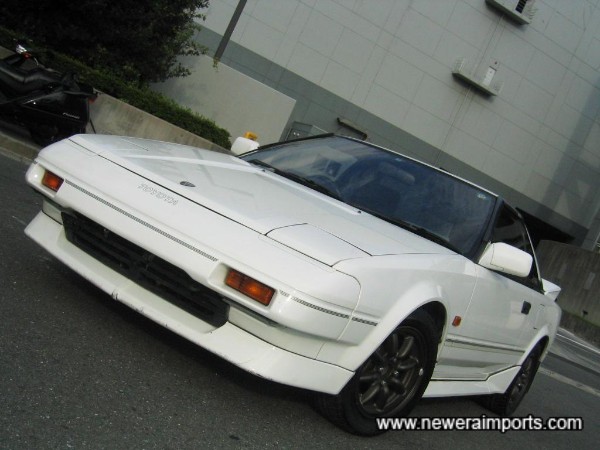 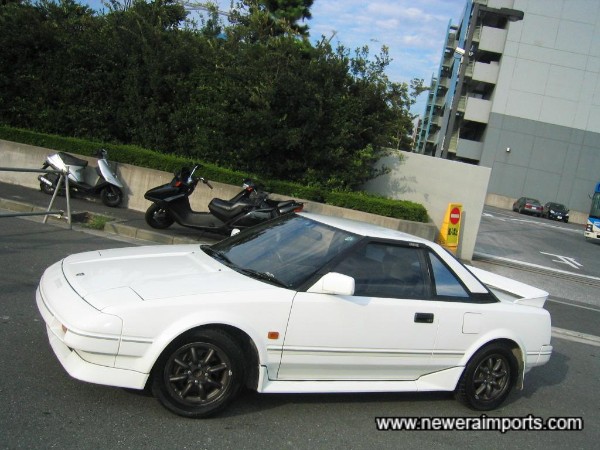 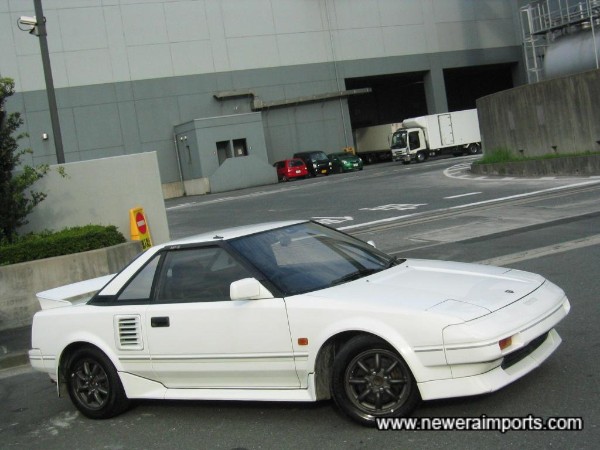 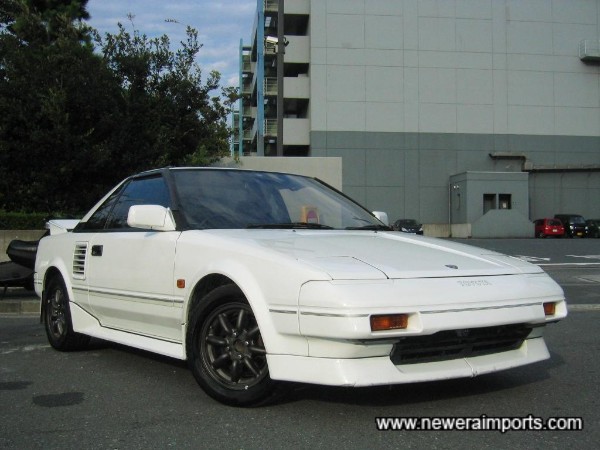 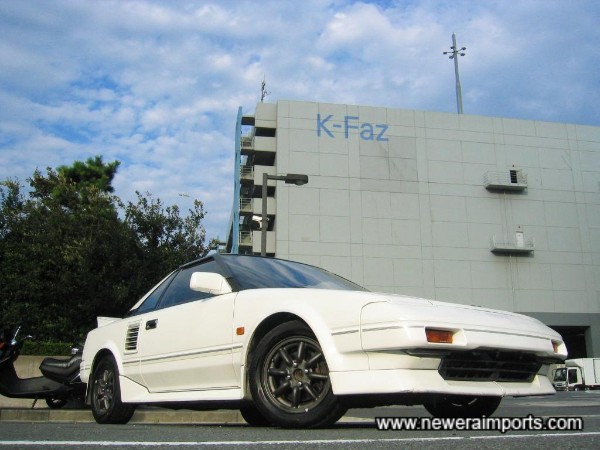 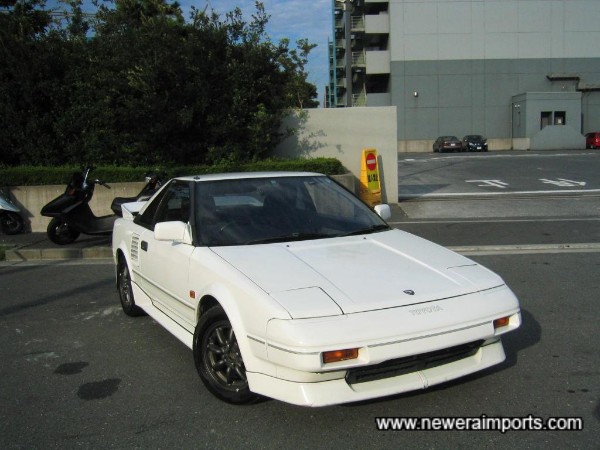 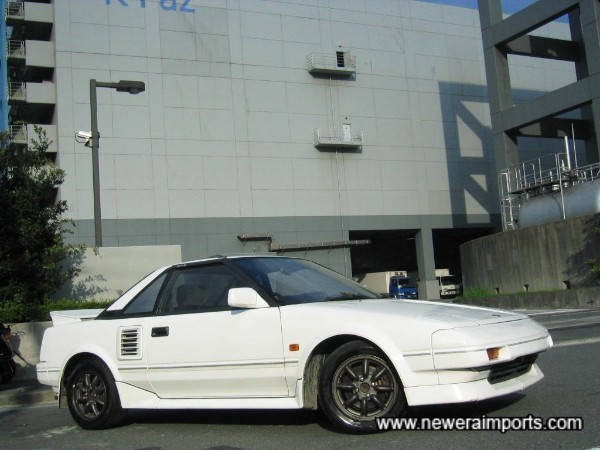 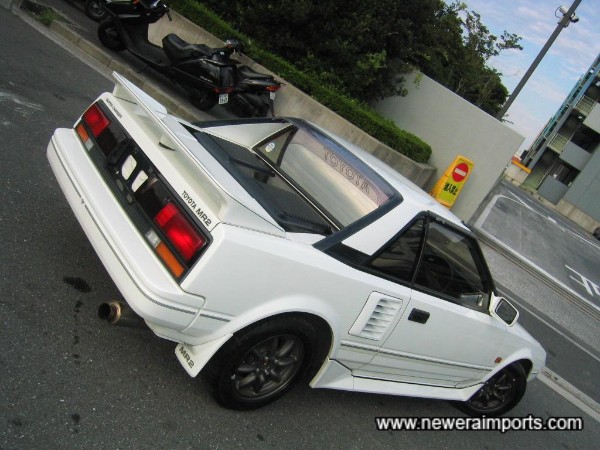 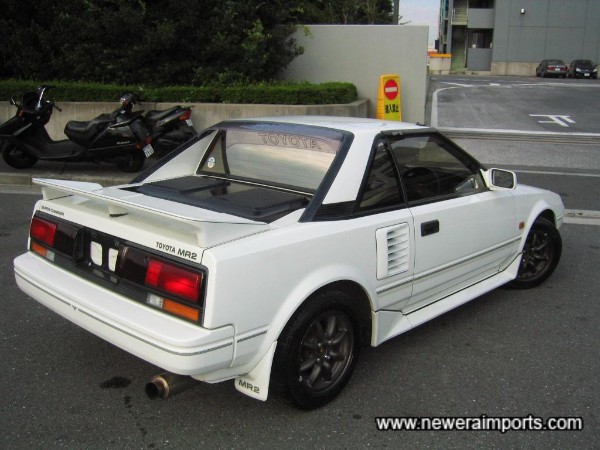 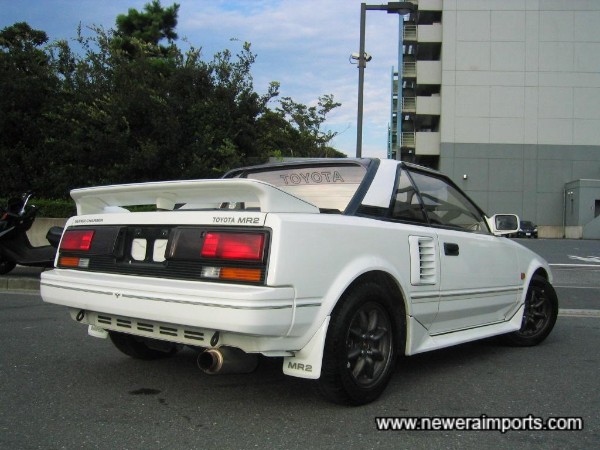 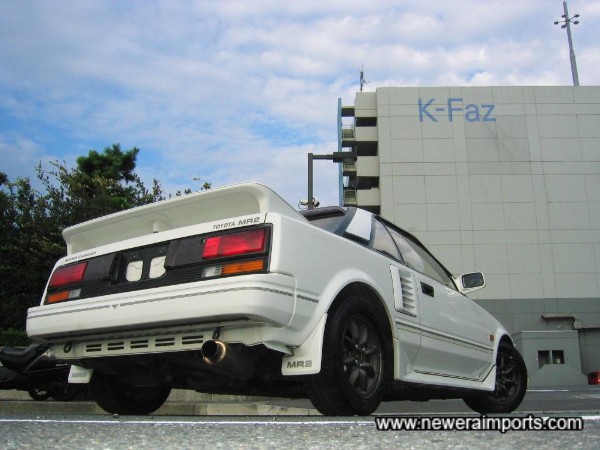 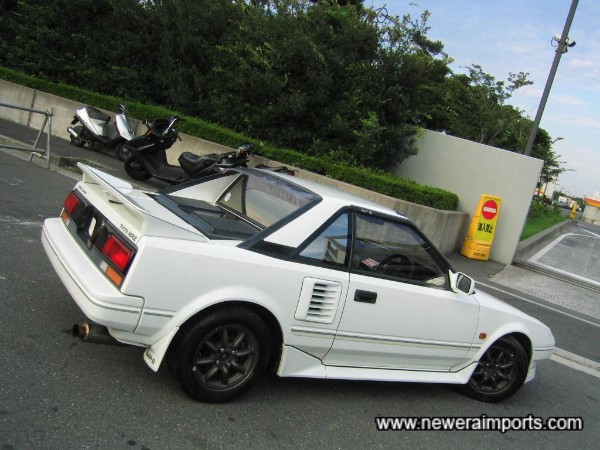 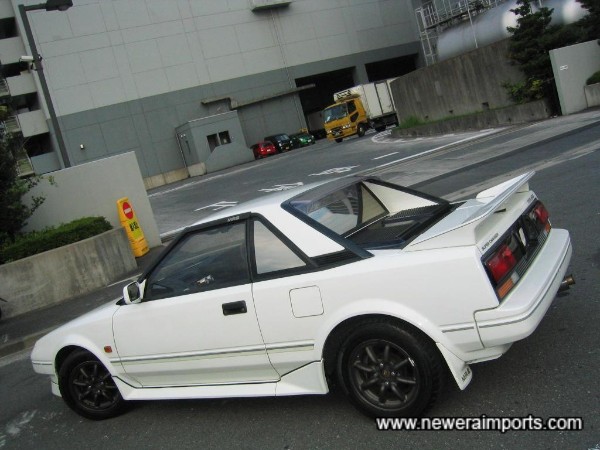 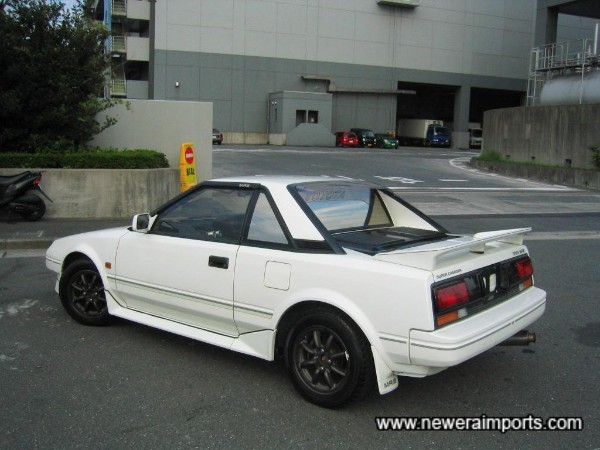 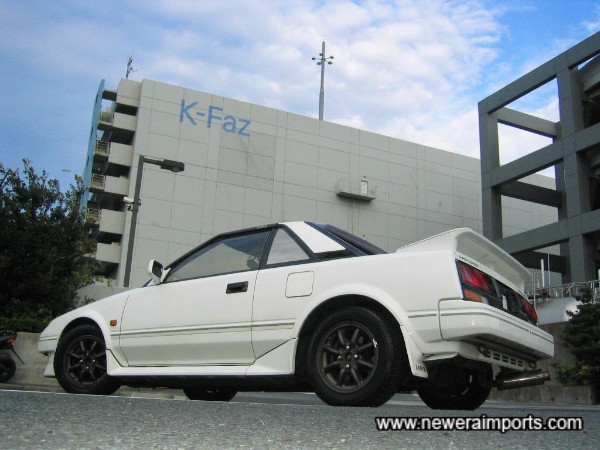 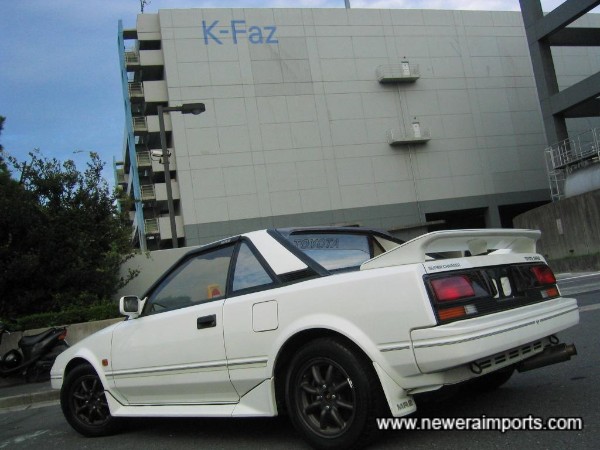 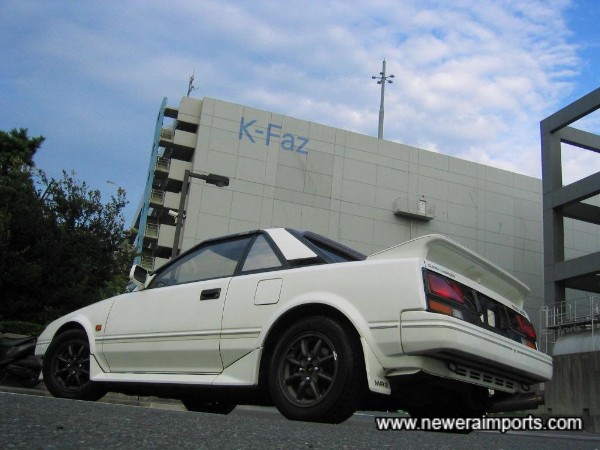 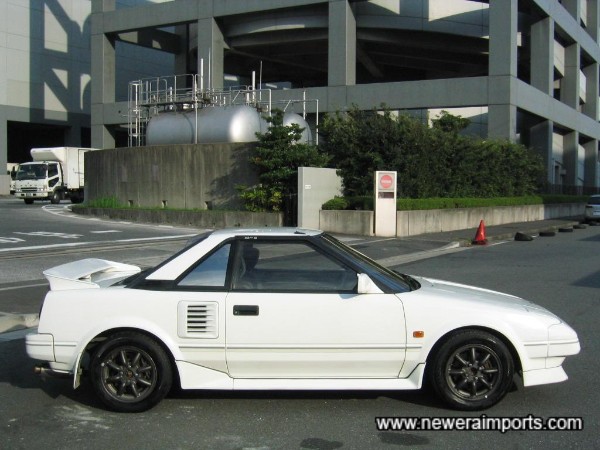 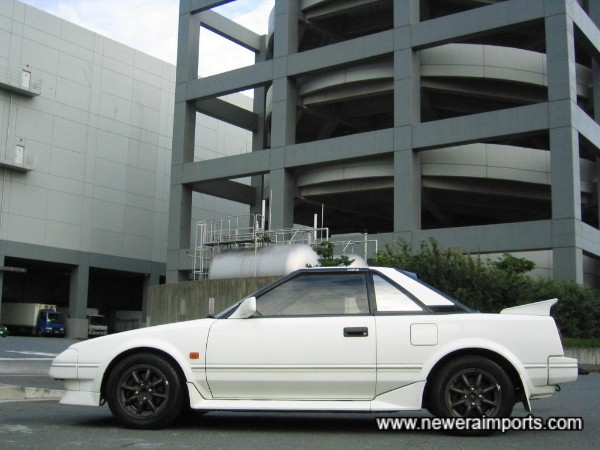 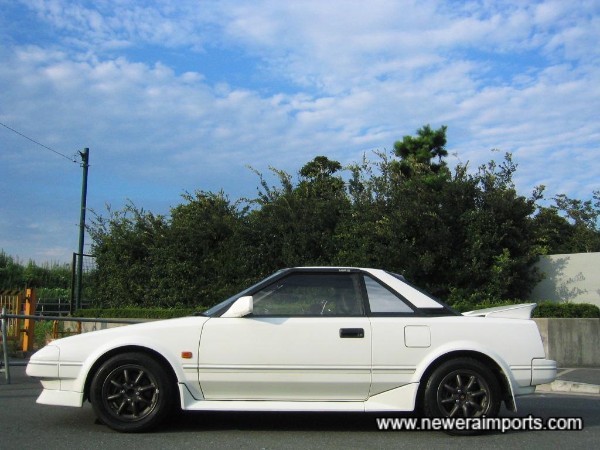 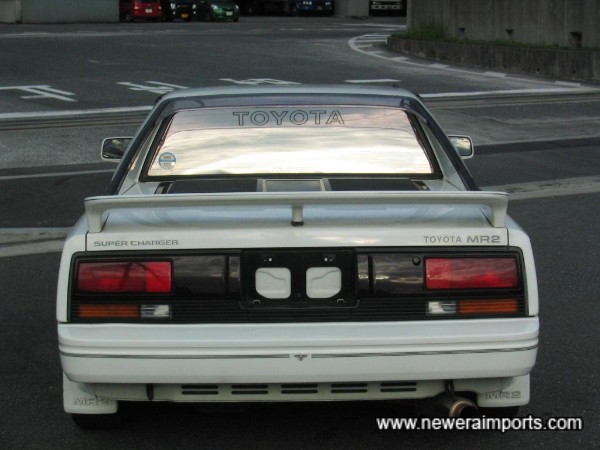 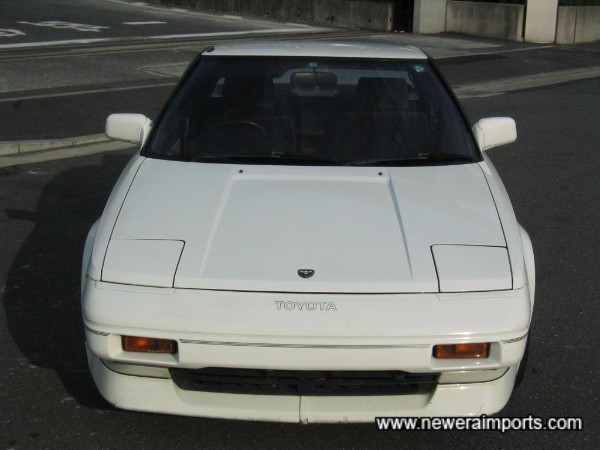 The small and light MR2, designated AW11, was perhaps something no one had expected from any of the Japanese car manufacturers, known for their economical and practical cars. The two-seat MR2 was not designed as practical family car, but the design criteria were different from that of most previous cars. The most important features of the AW11 were its light body (as low as 2,200 lb in Japan), superior handling and relatively powerful, small-displacement engine. Thanks to these features, the AW11 is considered by many to be very enjoyable to drive. Its behavior mimics that of highly expensive super cars and is easy to control and nimble in its movements. Toyota's cooperation with Lotus during the prototype phase can be seen in the AW11.

As the first power plant, Toyota chose to use the Yamaha developed 4A-GE1600 cc engine with two overhead camshafts and 16. The engine was also equipped with a Bosch L-Jetronic type multi-point fuel injection In 1987, Toyota introduced the 4A-GZE for the Japan and USA markets only. Based on the same block and head, the 4A-GZE was equipped with a roots-type supercharger and therefore the compression ratio, valve timing and ports were modified complete with forged alloy pistons. The engine produced a maximum power of 145 hp (108 kW) and accelerated this small car from 0 to 100 km/h (0 to 60 mph) in 6.7 to 7.0s. In addition to the new engine, the MR2 SC was also equipped with stiffer stabilizer bars and reinforcements in the body shell to improve rigidity.
The press received the AW11 with open arms and praised its innovation, great feeling, and responsive engine. American car magazines Road Track and Car and Driver both chose the AW11 on their lists of ten best cars of the 1980's which included some tough competition, such as the Ferrari Testarossa. The Australian Wheels magazine chose the 1988 AW11 as its favourite sports car. The MR2 was Motor Trend's Import Car of the Year for 1985. In 2004, Sports Car International named the MR2 number eight on the list of Top Sports Cars of the 1980s. The MR2 was on Car and Driver magazine's Ten Best list of 1986 1987.

On our travels through auctions in Japan we are constantly on the lookout for special cars and this example struck us as being in very original condition! Being very collectable in Japan when in top condition and therefore usually unaffordable, This example is only the 2nd AW11 we are importing to the UK in over 2 years. This example’s been beautifully looked after and is of low genuine mileage. With examples in North America, UK and even Japan, rust is the major problem on these, but being a Tokyo car that’s apparently never seen salt, this example’s been beautifully preserved!

This is a coupe version with no (Leak prone) T-Bar roof, meaning it's lighter and stiffer in construction.

Interior is in excellent condition. Note that no hifi isincluded with this car, although uprated speakers are fitted. Seats are in good condition, although there's a couple of light burn marks on the driver’s seat (Picture available). Although these marks are there, the ashtray appears unused and there is no smell of smoke. This car's previously had a rill cage fitted, but this has been removed - with holes sealed. Carpet has 2 telltale cuts by the sills (as shown in the pictures) but these are hard to notice. Certainly of no cause for concern. Also fitted are 2 Autometer gauges on the centre console, which show oil temperature and boost for the Supercharger.

Auction Grade is 4. Very rare to find on a car of this age! This MR2’s been very well kept as pictures clearly show. We washed and carefully checked it over thoroughly, to find any faults there might be. There is no rust to be found at all. We checked in the usual places such as arches, doors, door shuts, sills, underside, etc. No rust at all!
The paintwork’s generally excellent and resembles that of a car a quarter of it's age. There aren't even any pin dents - both sides are completely ruler straight!
We found only the following: Scratches to the front lip spoiler, with one repairable crack to this on each corner. One small stone chip on the bonnet, around 2mm in diameter. The engine cover is of a different colour to the rest of the bodywork. There's a small scratch on the n/s door mirror and some minor chips from the paint on the n/s/f mud flap. Each of the above faults will be professionally resprayed or touched in (Where tiny) professionally as appropriate as part of our full llowing are tiny faults, too small to repair, but described here so a complete discription is given: There's a very small pin dent on the roof (Too minor to repair) and minor peppering to the paint on the side skirts near the rear wheels, from grit thrown up over the years (Again, too minor to repair). Finally, the door mirrors although plastic - have alloy mounts painted in white. The paint on these is bubbling slightly - although hardly noticable except on close inspection. Amazing condition for a 20 year old example!!

Test Drive: Car starts well, oil is clean and recently changed, and the engine runs well. Supercharger pulls well – and power is there throughout most of the rev range, clearly more than is available from a normally aspirated 4AGE engine with low down torque available. Brakes work well, with no signs of warping, clutch is strong with plenty of life and the gearbox is synchro problem free. Suspension’s good on the road and handling's tight. Sounds excellent too with the exhaust system fitted to it!
Please note, we are able to supply available tuning and OEM parts at discount for this MR-2 through www.neweraparts.com

If you're after the very best original AW11 Supercharged MR2 currently available, this is it!!
Complete with full UKconversions and registration, MOT, 12 month's comprehensive warranty, paintwork repairs to faults described completed to high standard, full valetting and 6 month's road tax, this one off top condition MR2 SC is available at: £5,360 OTR. Alternatively we can also supply this car with bodywork as is, but fully UK converted, MOT’d and UK registered with 12 month’s warranty, MOT Tax at £5,490 OTR, or if you want to do all the UK mods, MOT and registration yourself (No SVA required on this car), price (Warranty optional but not included in this price) is: £3,950 …..Compared to UK rust buckets with twice the mileage, this is a bargain in comparison! Now arrived! This MR-2 can be reserved now with a deposit of £1,000. Please Contact Us for further information or to arrange viewing!
Newera Imports - suppliers of the highest quality examples of the best sports cars from Japan. As recommended by J-Tuner, Jap Performance and Banzai magazines, internet clubs, forums and UK specialist tuners!