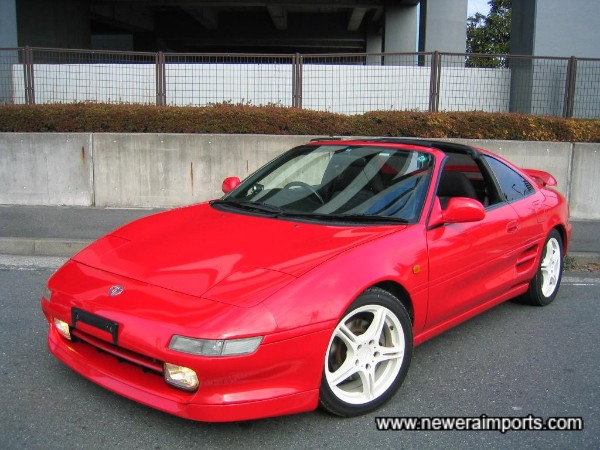 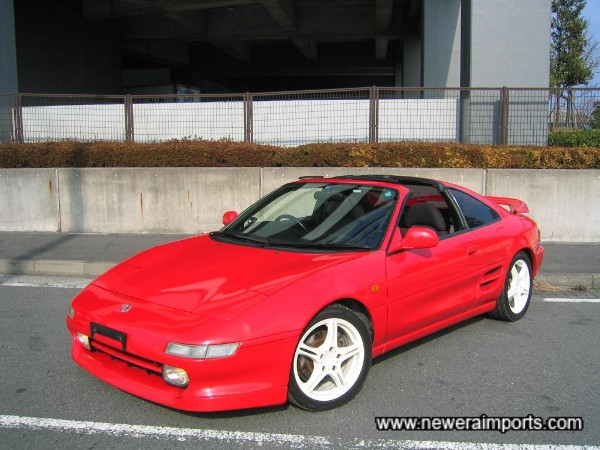 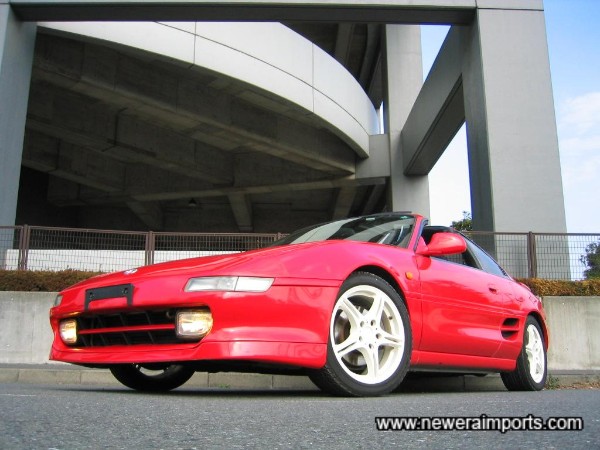 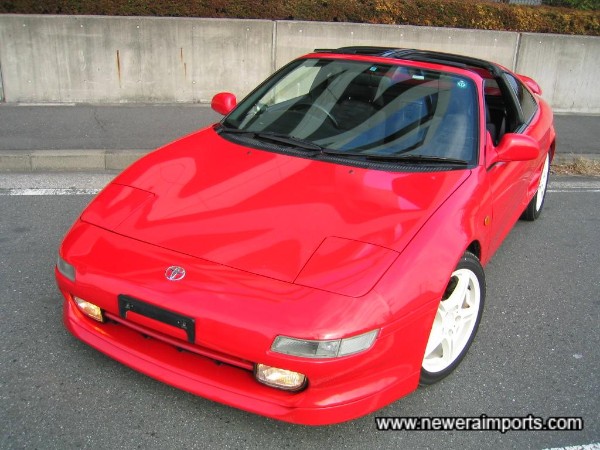 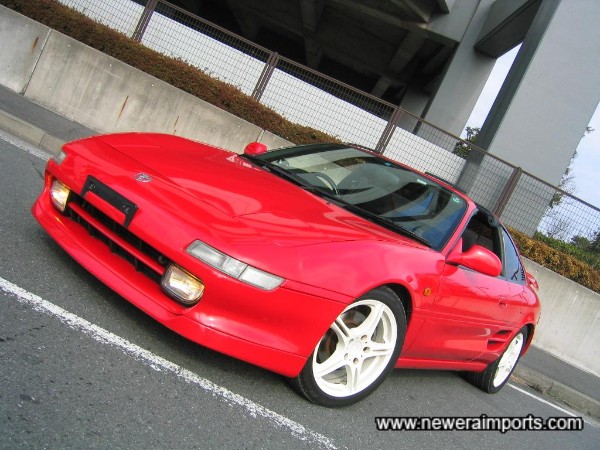 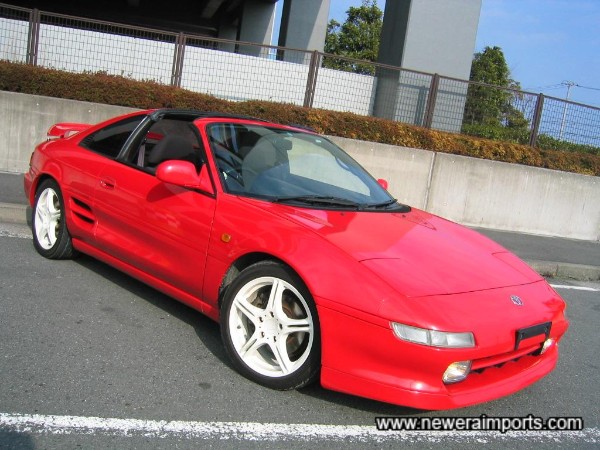 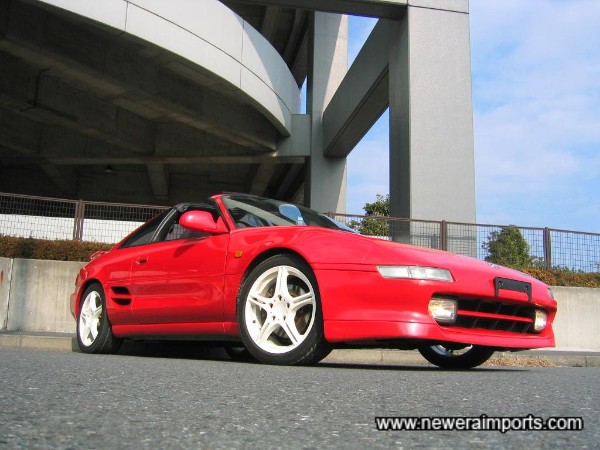 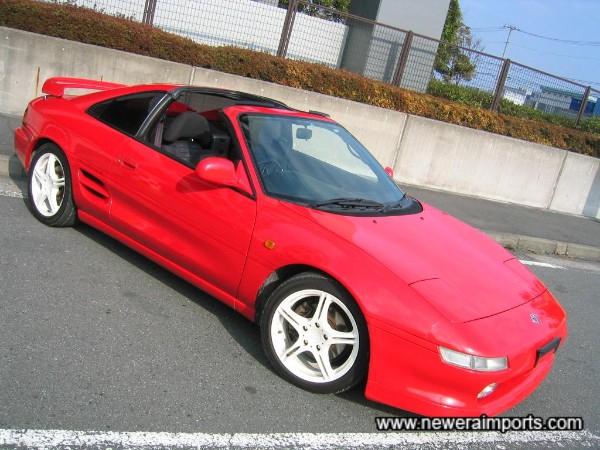 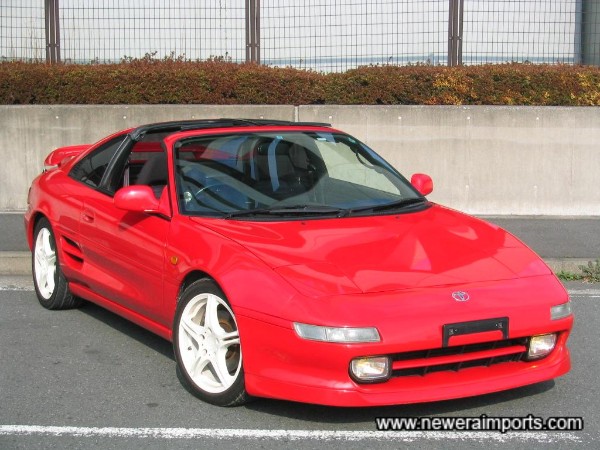 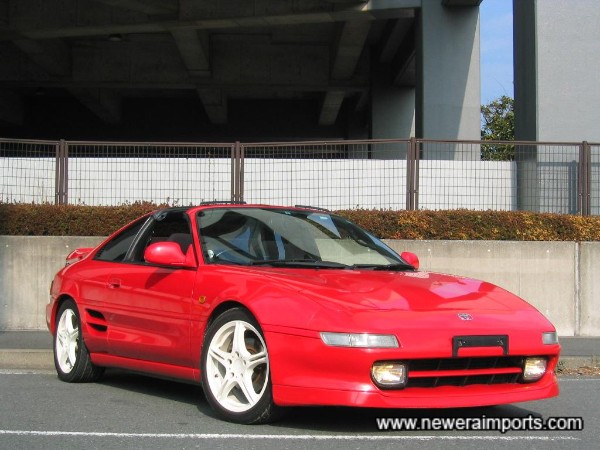 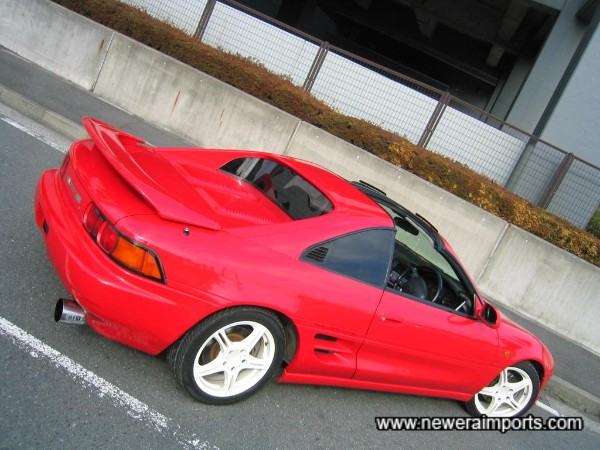 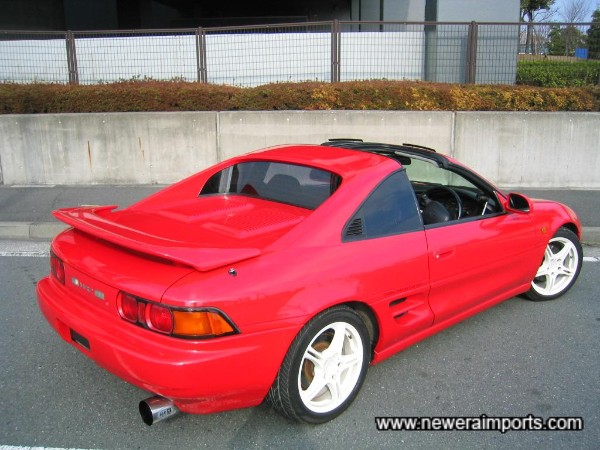 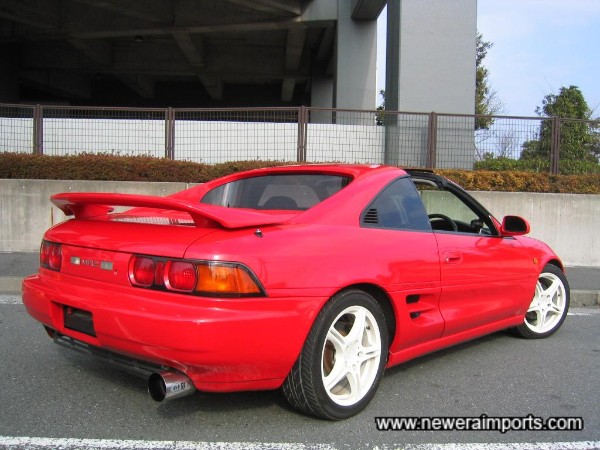 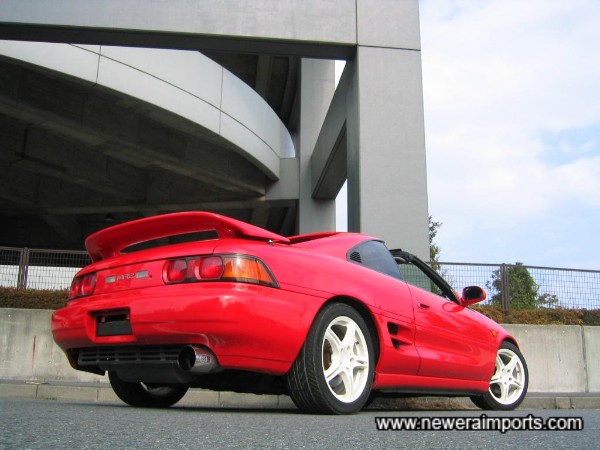 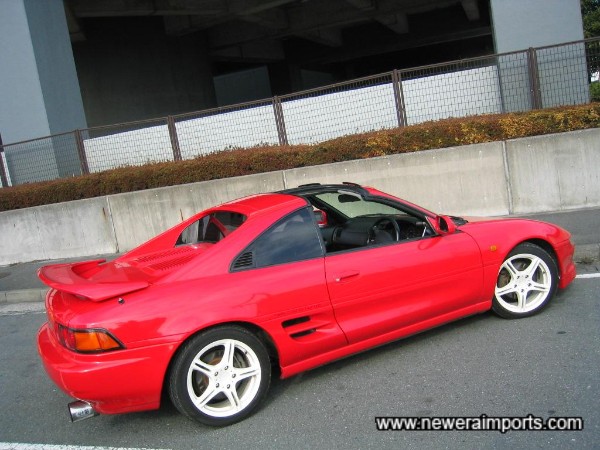 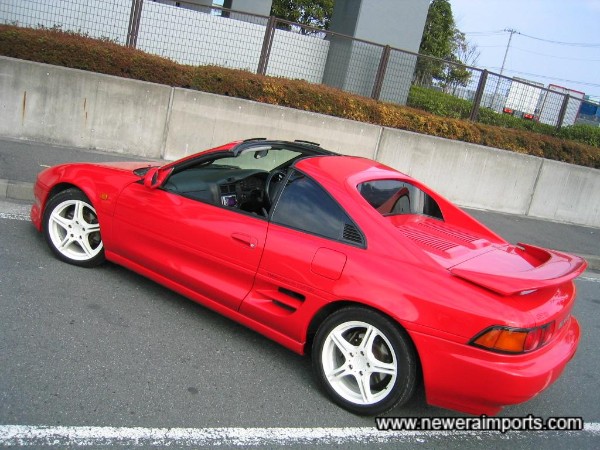 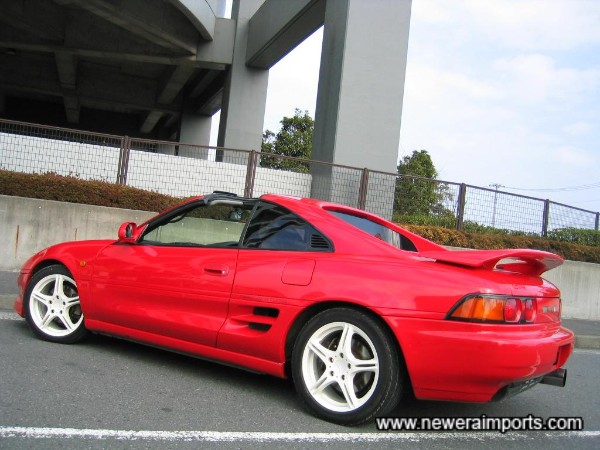 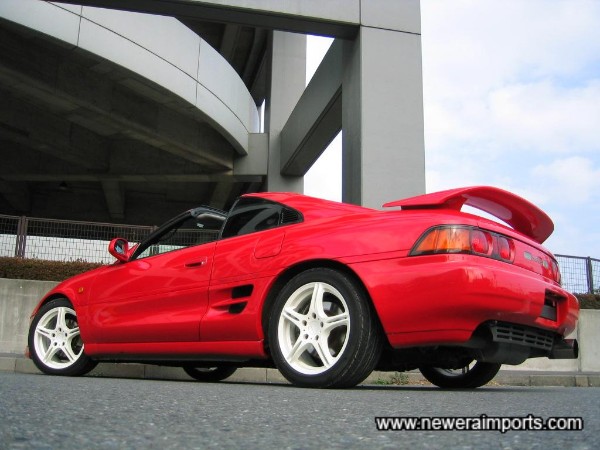 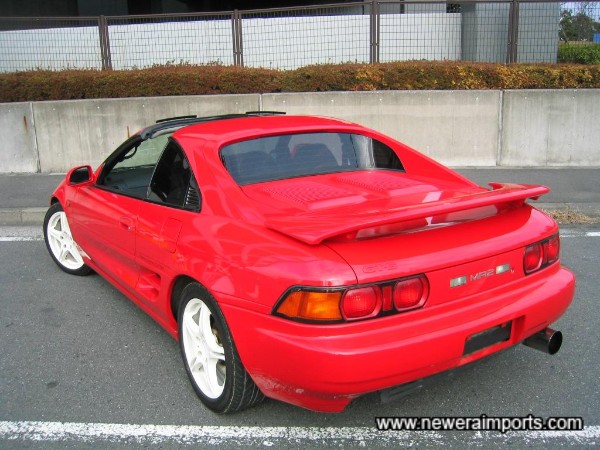 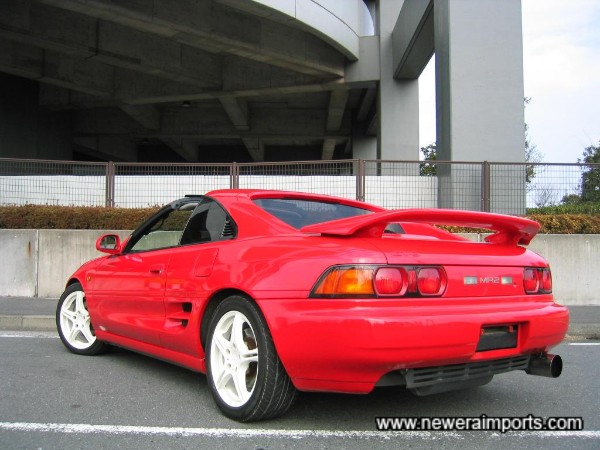 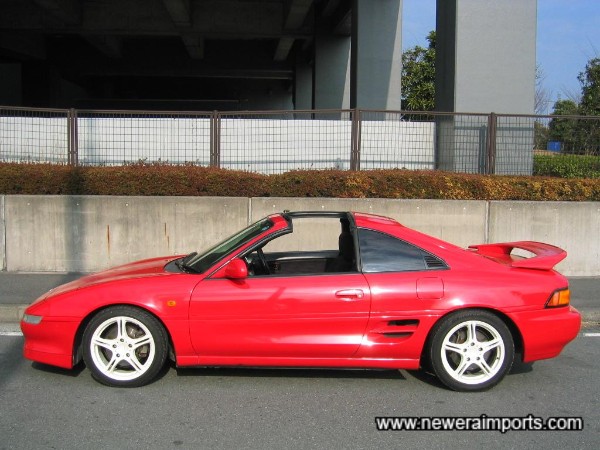 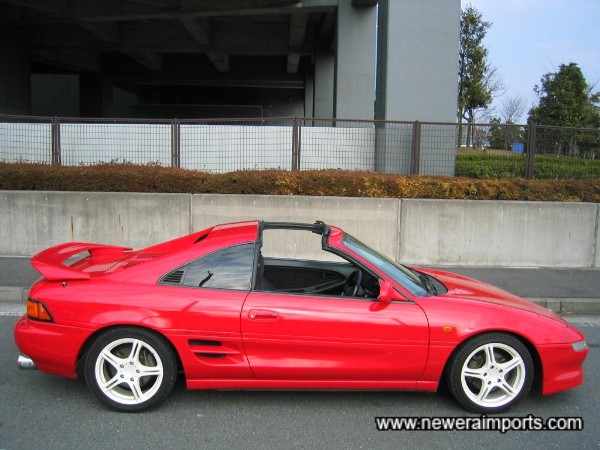 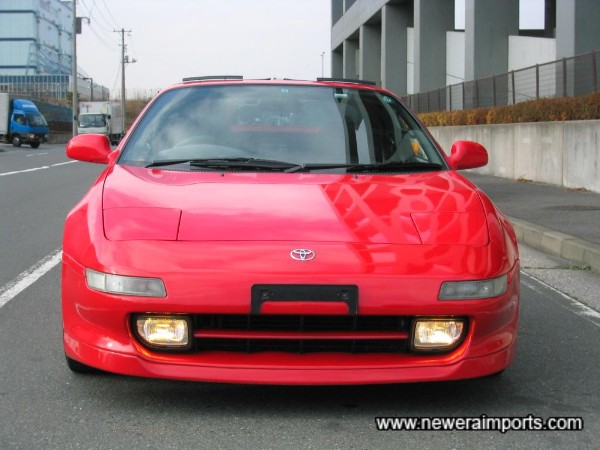 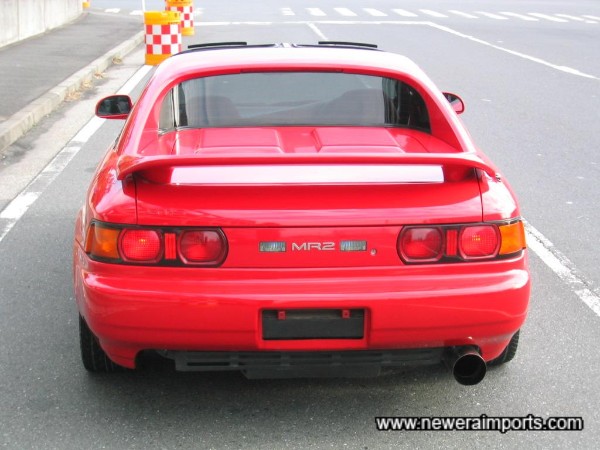 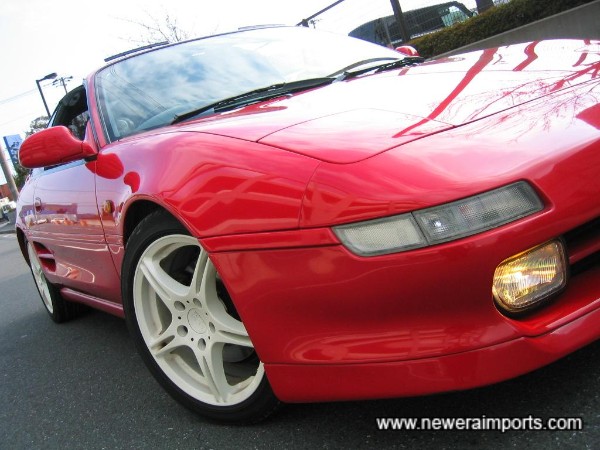 The MR2 turbo was made from 1989 onwards for the Japanese market only, whilst the rest of the world had to make do with normally aspirated versions only!
In 1994 Toyota introduced the Revision 3 turbo model in Japan. Fitted with a more version of their 3S GT-E turbo engine giving 245 bhp as standard, other revisions also brought uprated suspension for greater grip and safety at high speeds, uprated interior trim, as well as newer larger sized wheels, plus of course new fresh colours. With these changes the MR2 became a better car - which is still in strong demand by enthusiasts both in Japan and UK, etc. The Revision 4 model was introduced at the very end of 1996. In addition to the Revision 3 modifications, it received 4 channel ABS as standard, Dual SRS Airbags, clear front indicators and side repeaters fitted on the side of each front wing. Glass was also changed to a more modern green tinted type (Previous models had glass in brown-grey colour). More new colours were introduced too.

With this example, what you see is a very rare combination, especially because of the mint condition exterior very rare T-bar! - To find a Revision 4 with this spec. is usually next to impossible.

Mild Modifications: This MR2 has received some mild performance upgrades: In the engine bay, there's a dump valve.The exhaust is a high flow single exit Kakimoto system. Please note - if desired, we are able to supply a new Power FC ECU specific to this MR2 model as well as a boost controller and choice of induction kits. Please see www.neweraparts.com for more details.

Interior: This has been a non smoker's car since new. There are no faults to remort with the interior except for some scratching to the paint surface of the glovebox on the passenger side and a small cut in the carpet as shown, where something was previously fitted. See Pictures.

The auction grade is 4 (Auction sheet is shown in pictures). This MR2's clearly been carefully cherished. It's in excellent condition. Looking carefully around the car we noticed the following faults: Front lip spoiler is scratched on the underside. On the o/s quarter there is a small pin dent. The driver's door mirror has a small scratch and there is a small chip of paint on the edge of the driver's door. Also, on the top of the A pilar there is a tiny area of paint imperfection. See Pictures for details. Underneath, the car is also like new. Pin dent will be removed from the rear quarter and we will also be repainting the front lip. Other faults mentioned are very small. A matching Toyota original paint touch up kit is in the glovebox.

Signs show of this MR2 having been regularly serviced. The timing belt has recently been changed also. Oil is relatively new - clearly this car wasn't driven hard - judging by the fact the brake discs still look hardly worn and there are virtually no stone chips on the car at all. It would appear this car spent most of it's driven life on Motorways cruising at legal speeds in Japan. we test drove this car and found it drives very well, giving good strong power throughout the rev range. Driving out of our yard, which is quite bumpy, we noted that there were no rattles and squeaks to be heard. When driving on the open road, the car felt tight and unused. Brakes pulled the car up well with no signs of warpage, as is often common on older cars. Clutch has plenty of bite remaining. Felt very smooth.

Spec. like this is very sought after, so an example such as this is not expected to depreciate significantly. Rev 4 MR2 T-Bars are what MR2 enthusiasts would most like. You cannot find another Rev 4 T-Bar turbo in the UK for sale!
Inclusive of full UK modifications, MOT, UK registration, 6 month's road tax, 12 month's comprehensive warranty, paintwork as described a full vallet, Now shipped and due for arrival beginning of July! A deposit of £1,000 secures this car.

Please Contact us to obtain full information on this MR2 or to source an alternative!