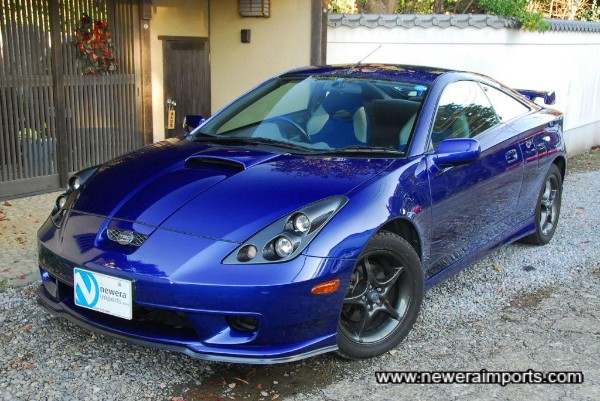 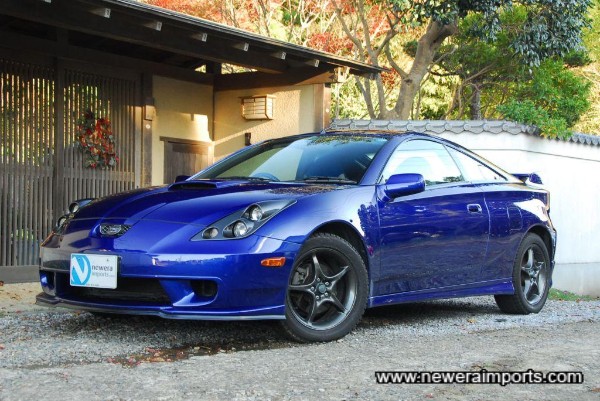 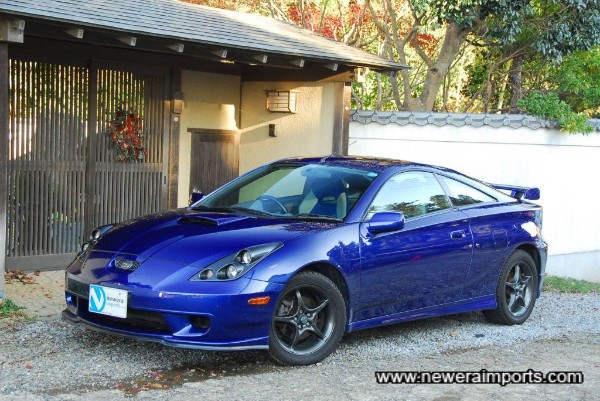 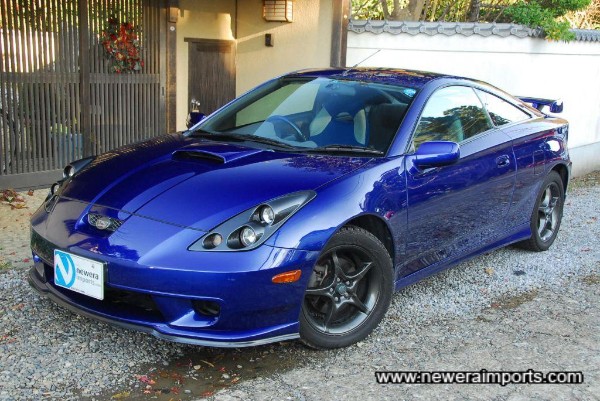 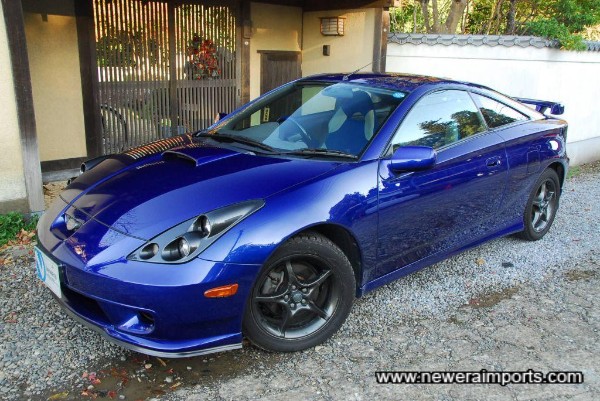 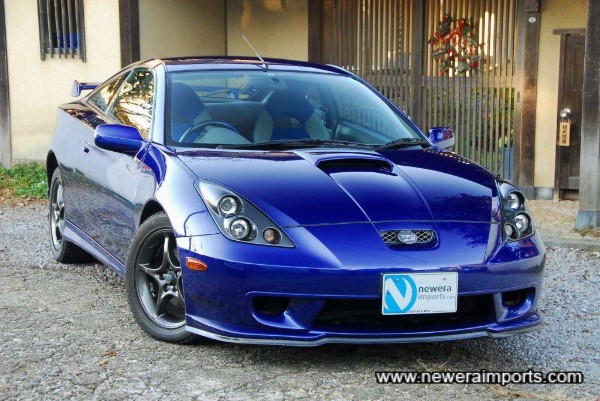 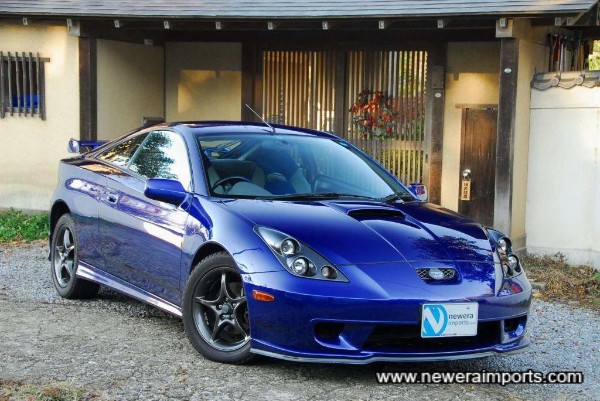 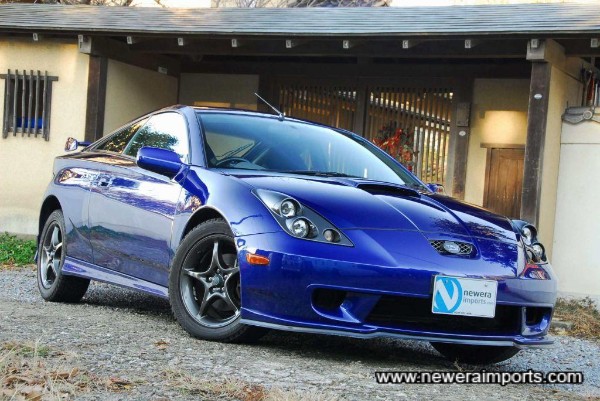 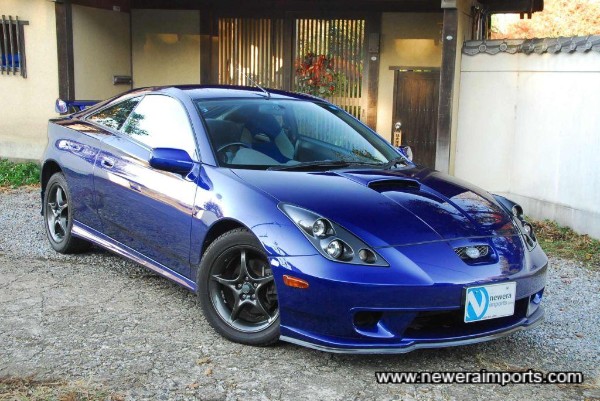 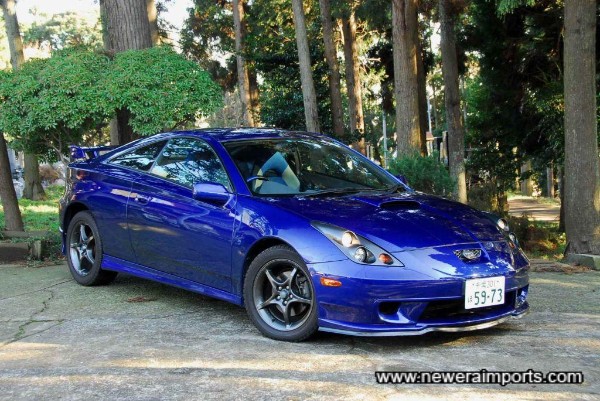 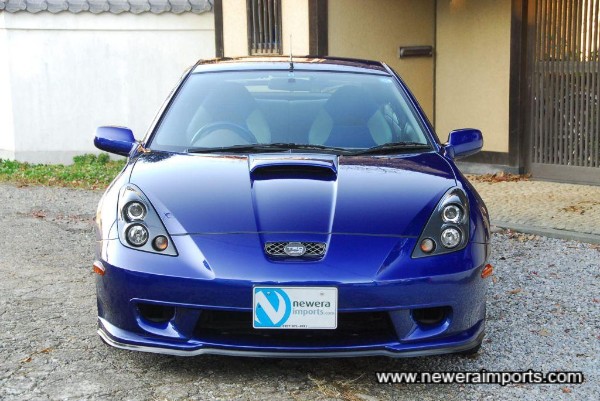 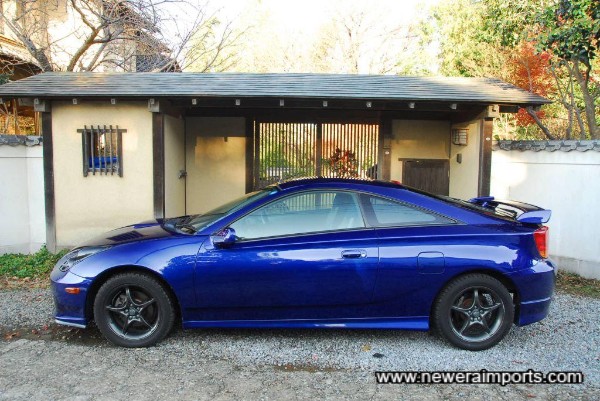 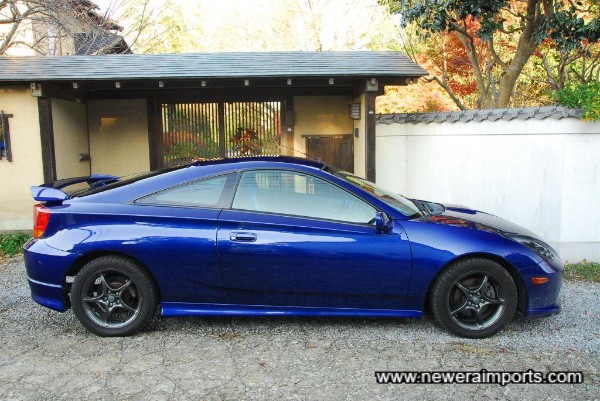 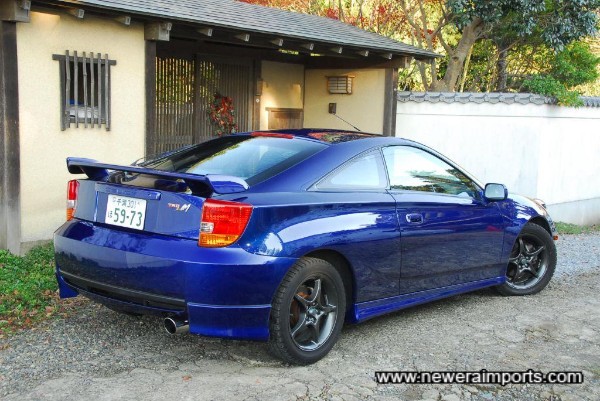 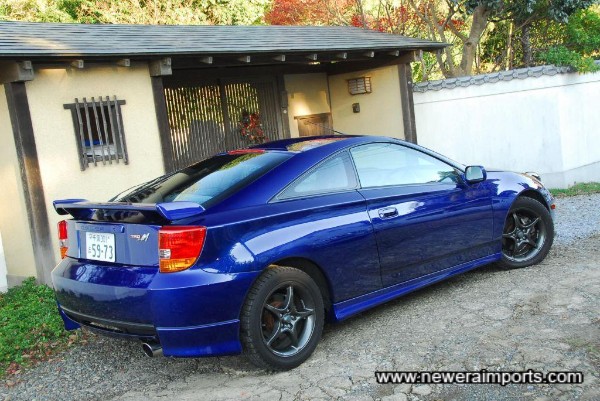 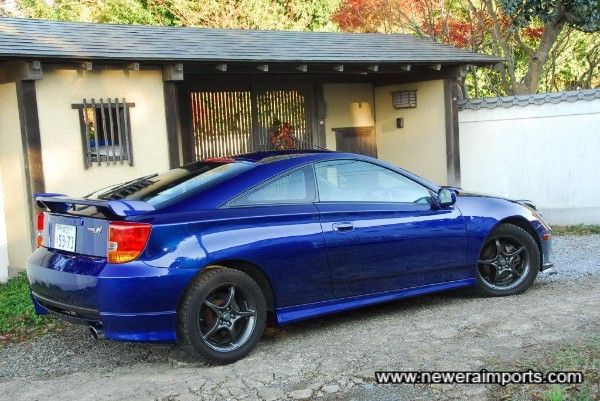 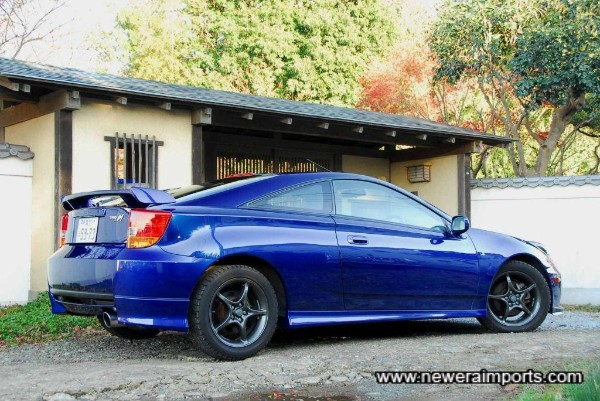 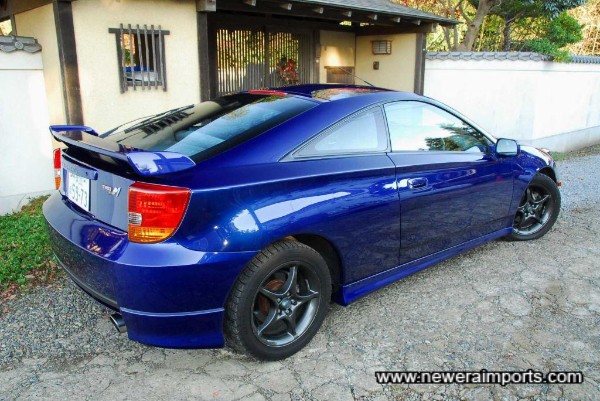 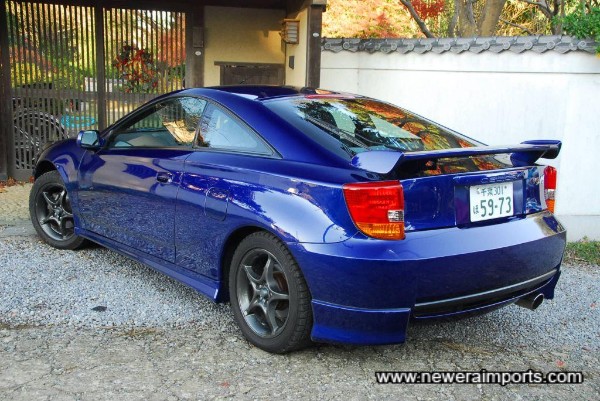 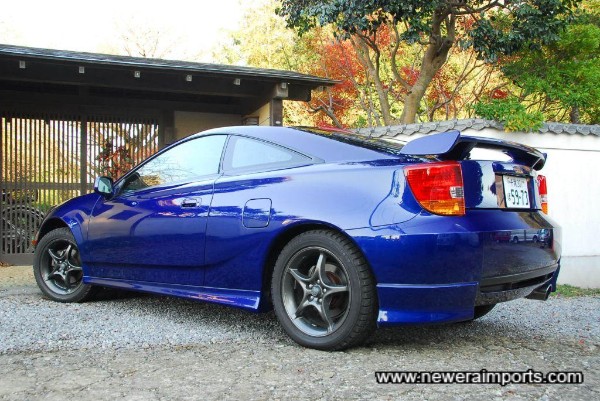 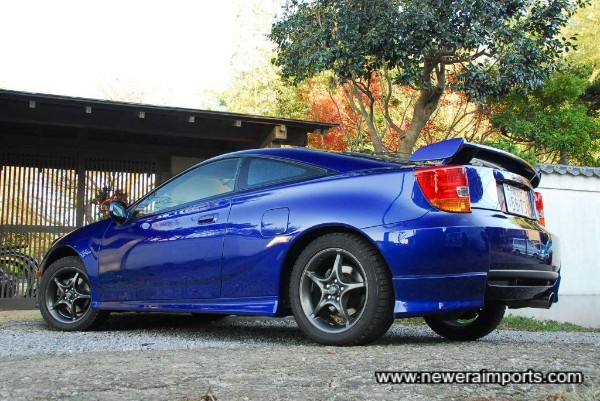 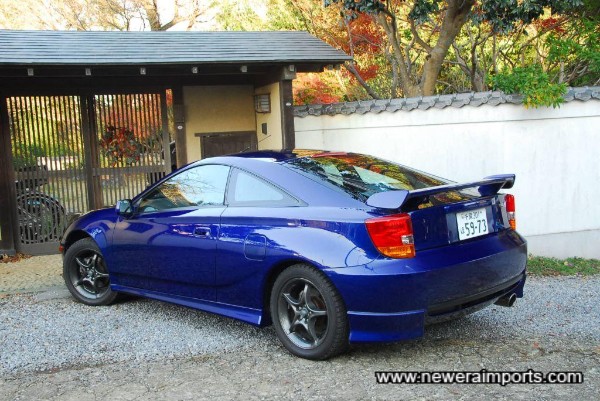 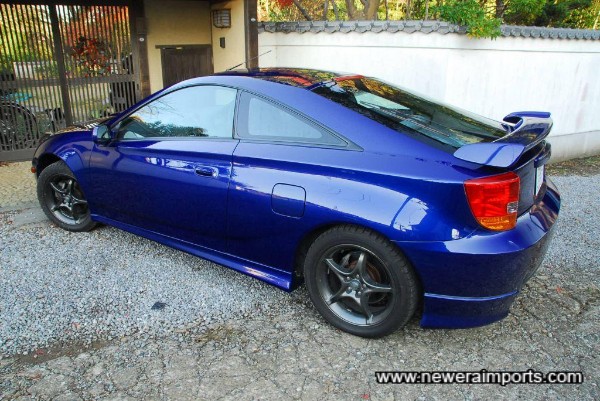 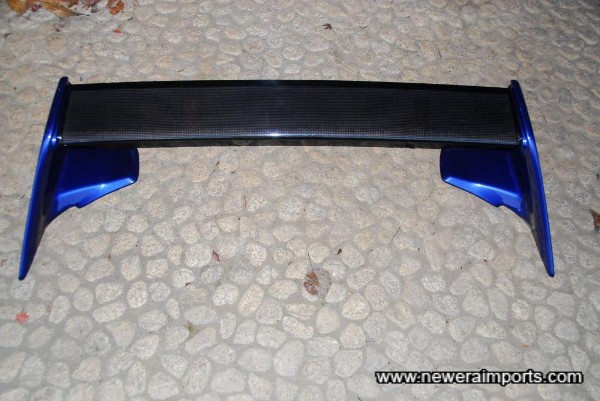 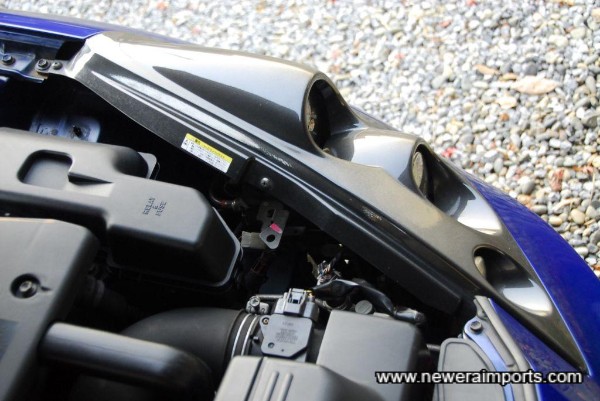 The TRD Sports M Celica was made solely for the Japanese market. Many people claim their normal VVTLi is a sports M, when in fact they're just normal versions. In reality the differences are very significant and there are just a handful of genuine examples in the UK. Toyota's TRD tuning arm built just 1,200, each with it's unique chassis plate denoting the build number (This one's ZZT231-M0498). Their mission was to make the car lighter, stiffer, faster and better handling - which they most certainly did!
Original Sports M Factory Upgrades: TRD started by stiffening the monocoque chassis with extra spot welds to suspension structural points roof pilars whilst reducing sound proofing and thus shedding weight. The engine was fettled with TRD light weight pistons of increased compression, re-profiled high-lift camshafts lightweight valves. The exhaust system was replaced with a TRD manifold high response Version S muffler. This combination increased power to 210ps. A TRD Helical LSD with uprated organic clutch virtually banished wheelspin off the line whilst the gearbox ratios were revised to close ratio (6 speed). Suspension was uprated to TRD Sportivo shock absorbers, a thicker front anti-roll bar uprated TRD suspension bushes. Wheels remained original in design, but were painted dark grey as opposed to Silver. In typical TRD fashion, the body-kit of the Sports M enhanced the original design without resorting to excessive fuss. Unique features included a revised front lip, side skirts, rear valence and rear spoiler - with just two badges to give a clue of the tasty changes beneath the skin.Note this body-kit was made of injection moulded Polyeurethane so it would be resilient to stone chips and the damage that FRP bodykits tend to suffer from regular use. On this example a set of very rare and desirable TRD original option HID headlights was fitted - an item other 7th Generation Celica owners certainly can't help noticing. Inside, the TRD theme continued with half Alcantara sports seats and door inserts at the front, TRD Sports SRS leather steering wheel a matching leather trimmed shift knob. The instruments included a 240 km/h speedometer and a contrasting white faced TRD 10,000 scaled rev counter finished with a carbon type instrument surround.
Original sports luxury features remained to include climate control air conditioning, a powerful 200W hifi featuring an integrated 6 CD changer, tinted UV cut glass and usual features such as remote central locking, automatic power windows, full ABS, split folding rear seats trimmed in Alcantara, rear strut brace, lightweight space saver spare, high level central stop light, etc. Additional extras: This car has the full TRD original spec, with a few additions added: The fuel filler cap is by TRD and there's the option of a colour coded 3 piece adjustable high level rear spoiler - complete with wet carbon blade. It's not currently fitted to the car, but can be substituted if preferred at a reasonable additional cost. Note that C-One Motorsport and a full range of other sports parts are available to further improve this Celica. We even have a set of brand new stunning 18 inch alloys with matching blue metallic inserts, ready to fit. Ask - or view www.neweraparts.com for more ideas! Auction Grade of this car is 4.0. This is a one owner example that's clearly lived a priviledged life. It's mileage has mostly been clocked up on Japan's super smooth motorways (At legal speeds). The lack of motorway stone chips complete absence of parking dings show it's clearly been cherished. Paintwork condition is so good - there's no doubt it's always been garaged. Having being a non-smoker's car, the interior is excellent with no faults to report aside from some wear to the vertical bolster of the driver's seat and wear to the floor mat.Note the underside is absolutely rust free even the original TRD exhaust still has no corrosion. Compare with a standard VVTLi Celica that's been on UK roads all of it's life and you'll see just how well preserved this example is by comparison. It's been serviced and looked after by Toyota since new - with no expense spared. Even the brakje discs look unworn.The only fault on the entire car is a blemish to the rear bumper corner and skirt, where the bumper's nudged something. The rear bumper will be re-painted as part of full UK st before registration.Test Drive: We drove this car a total of around 100km before writing the above detailed report and are pleased to confirm it drives 100% perfectly. Above 6,000 rpm with the improved engine differential this car accelerates at a ravenous rate. Change up with the close ratio box and the apetite for revs continues insatiably. Handling is tight and rattle free and the brakes remain powerful. An absolute joy to drive.Inclusive of rear bumper repair, import costs, UK conversions, full UK registration, MOT, 6 month's tax comprehensive warranty - OTR total: £8,695.
Being a special car we're sorely tempted to keep it mind - but will compromise by making occasional use of it in Japan until it finds a new home. A deposit of £1,000 secures. Note we can also ship this car to European or other worldwide destinations. Ask about our FOB package. A deposit of £1,000 secures this unique TRD Sports M Celica.
Newera Imports - the only UK Import specialist with it's own offices in Japan. Recommended for over 12 years by owner's clubs, enthusiasts, magazines and tuners as the source of the very best pre-owned performance cars from Japan.