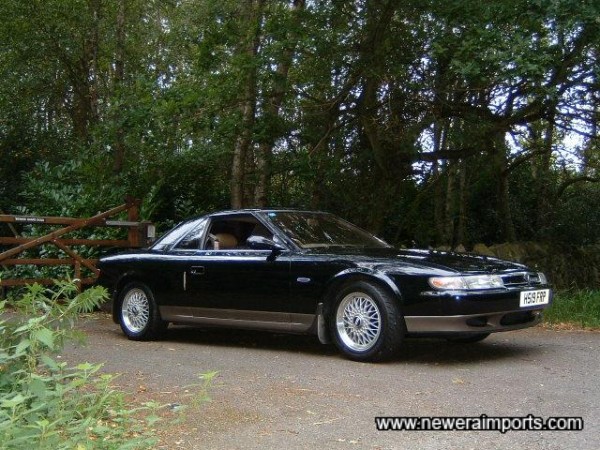 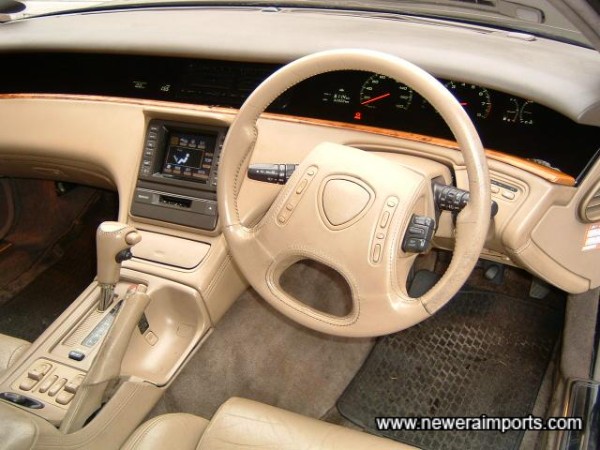 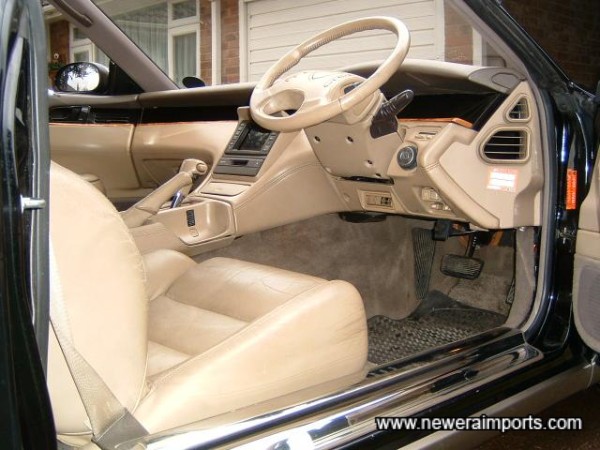 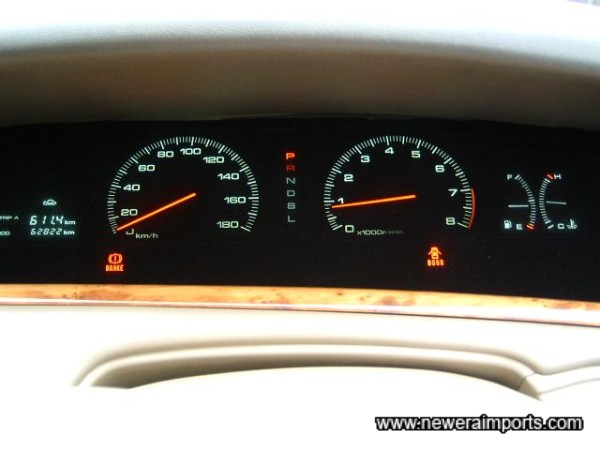 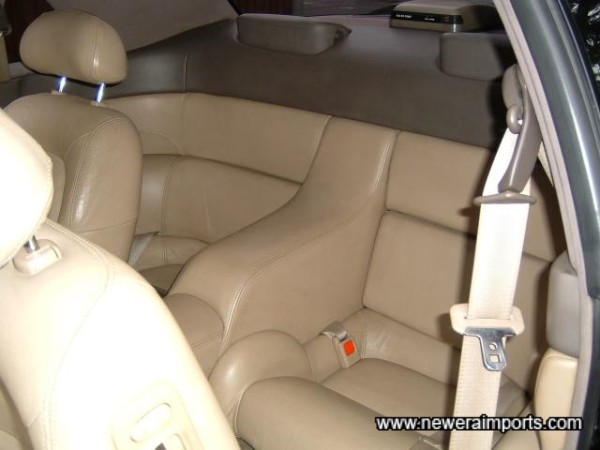 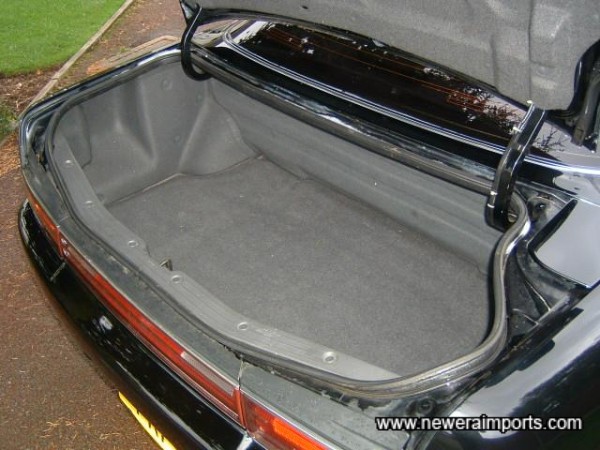 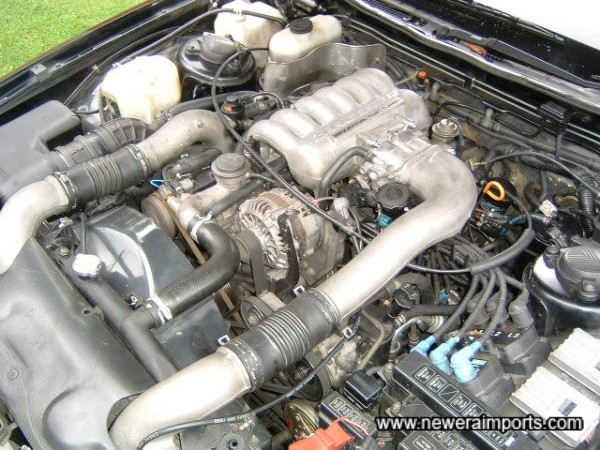 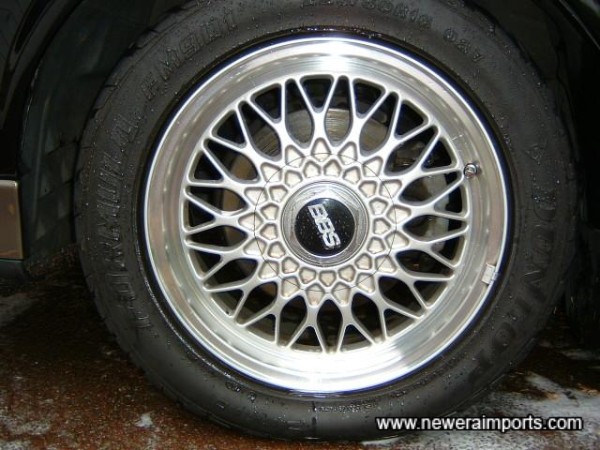 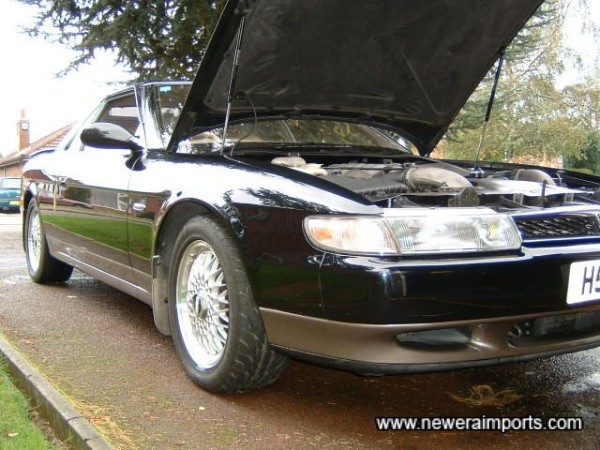 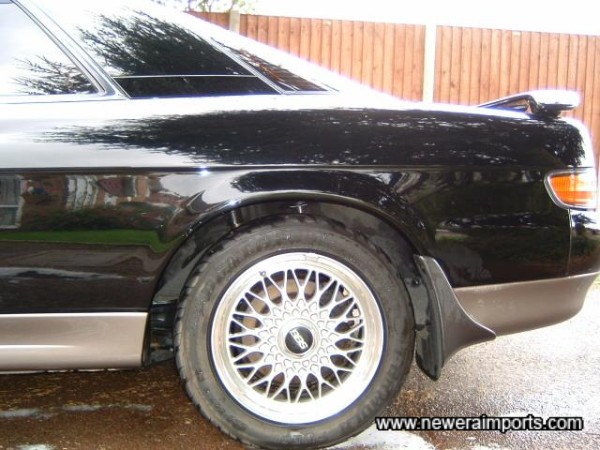 Being a car that was originally supplied some time ago by Newera Imports, we were happy to advertise this car on behalf of our customer. It was eventually sold to a delighted collector of Mazda rotaries in Germany:
1991 H' reg, Black Eunos Cosmo 20B E-CCS 3 rotor, These are very special and rare cars and represent Mazda's top of the line rotary powered vehicle.This top of the range model comes as standard fitted with a unique 3-rotor twin sequential turbo engine giving over 300bhp as standard with very strong torque. As a rotary it's the equivalent of a 4 litre piston engine, but also has twin turbos. Being a rotary, the engine is small, lightweight and compact. Despite being a sports cruiser, this car will happily out accelerate an Impreza STi in a wave of very smooth power torque. Performance when the car is up and rolling is very impressive and similiar to that of a stock 265bhp FD RX-7 - not slow in other words! Being a top of the range E-CCS model this car comes fully loaded with all the toys to include touch screen TV, CD, E/W. E/M, A/C with air cleaner unit, PAS, Cruise control and electrically operated seats. Also fitted is a Satnav system ( please note this won't work in the UK without conversion) - the heating system is also digital and is controlled by touch screen. This is operated through pictures on the screen, rather than writing. The engine has just been fully rebuilt by WGT Autos, who are the UK's most respected rotary specialist. This powerplant comes with a 6 month warrenty.The unit is still currently being carefully run in and will shortly be fully serviced and setup by WGT autos. Cosmo 20B are now becoming very rare in Japan and hard to find in this condition. Old worn out examples are being broken up for the unique 3-rotor engine, so now is the time to buy as this car is already considered a classic in Japan. Certainly if you own a car like this, you'll never see another one on UK roads!The car has a couple of minor faults which are described to give a complete and accurate description. The satnav pod mounted on the roof has come adrift and has cracked. This has been removed and the space where the unit sits has been sealed to prevent water seeping in. The CD cassette which fits the cars CD changer was missing when the car was originally bought so a new unit will have to be sourced. There are a couple of minor scratches on the front bumper ,these have been touched up using a paint pen but are hidden behind the UK number plate anyway so are not visible.Overall condition of the car is immaculate both inside and out - amazing given that it is going on for 15 years old now.The body is completely rust free,a typical trait of a fresh import and has been lovingly cared for by it's one owner in the UK. All four BBS alloys are unmarked and four recent tyres have been fitted by the car's previous owner in Japan.This car has been seen at a few Japanese car shows in the UK during 2004 and members of the Mazdarotaryclub will verify that it is indeed a lovely example. The current owner is now reluctantly selling due to needing something more economical and already owning 2 RX-7's besides!
The car is also taxed and MOT'd and is available for viewing by contacting the owner directly.More pictures of the car are available by request. Sold to a German collector of rare rotary cars!
We have the deepest experience with Japanese sports cars. We are the only importer with resident staff in Japan directly in touch with our customers in the UK. Since 1998 Newera Imports has consistently grown from only selecting and supplying excellence.