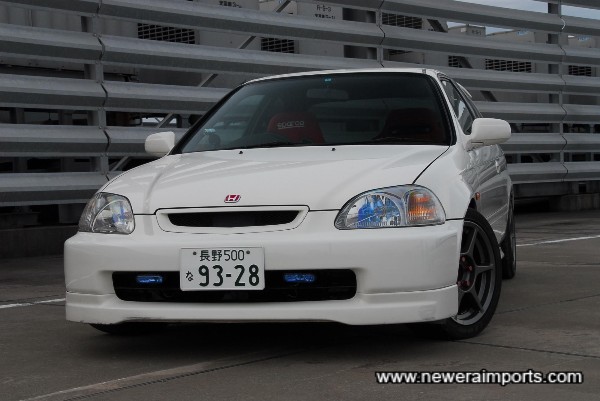 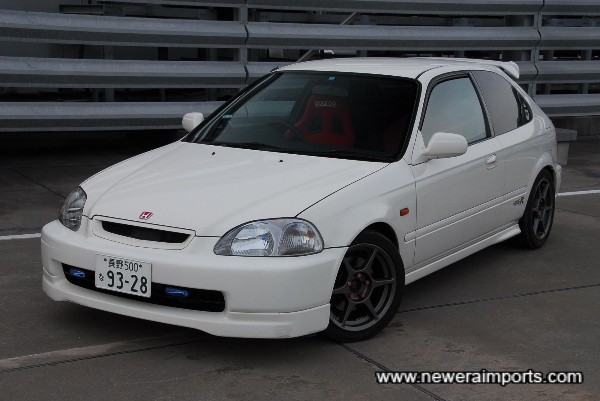 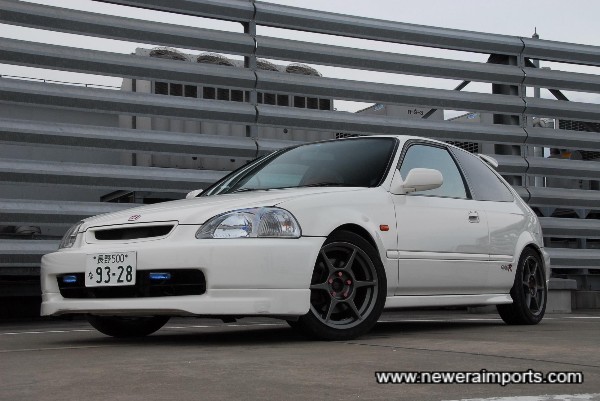 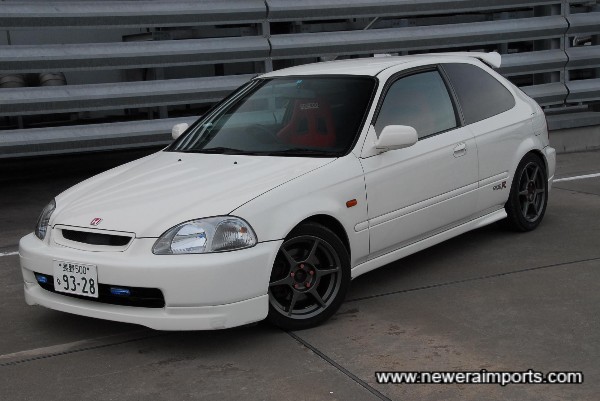 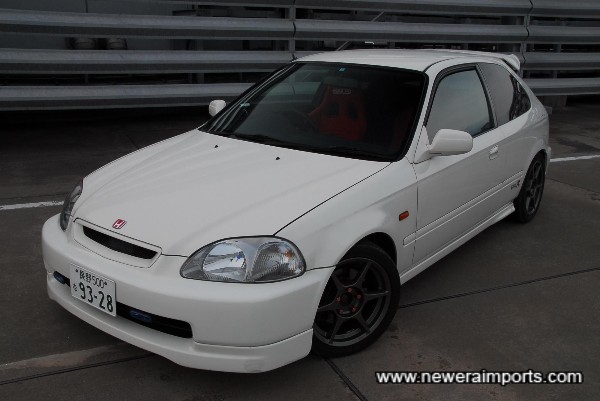 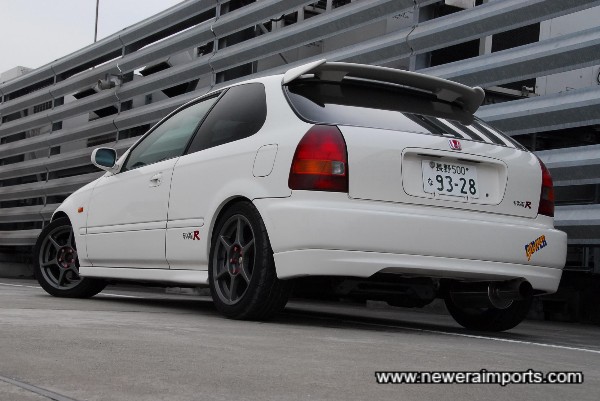 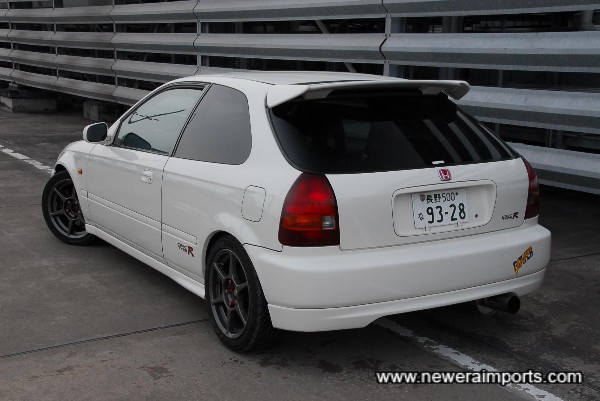 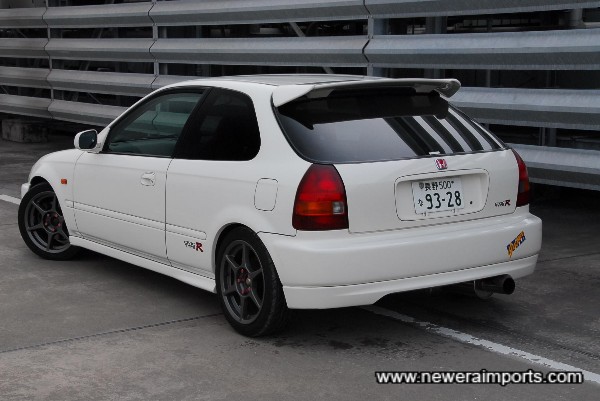 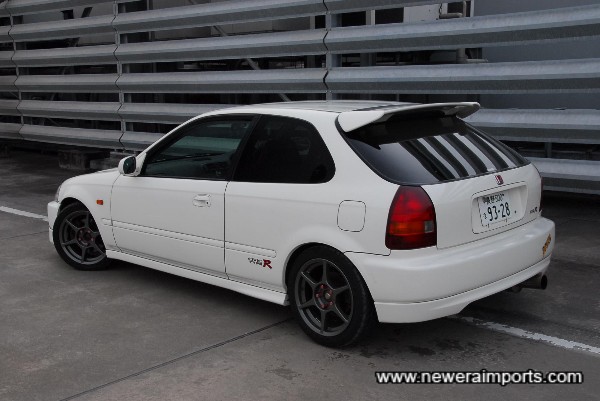 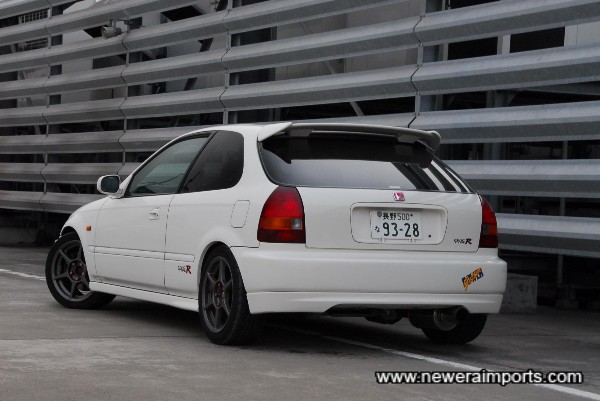 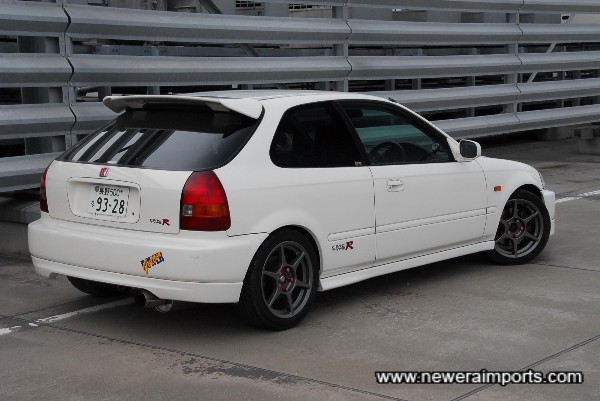 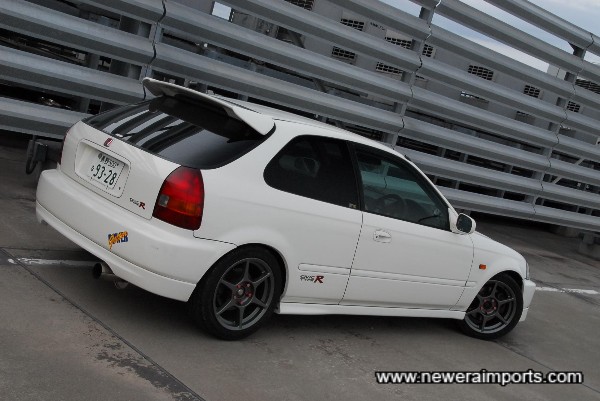 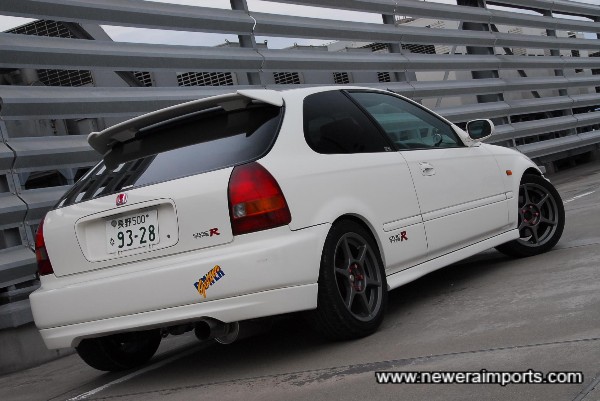 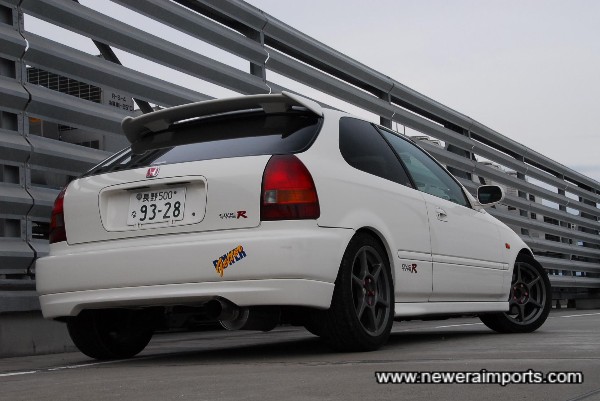 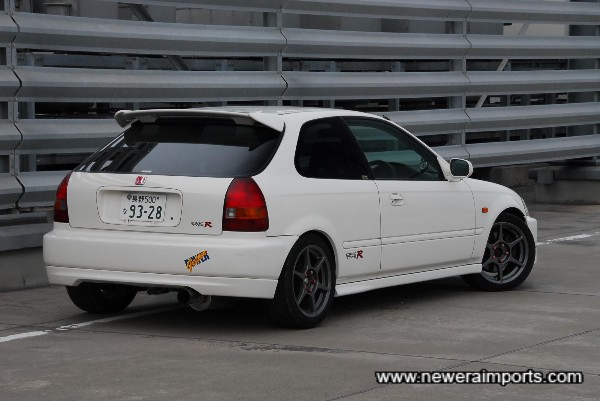 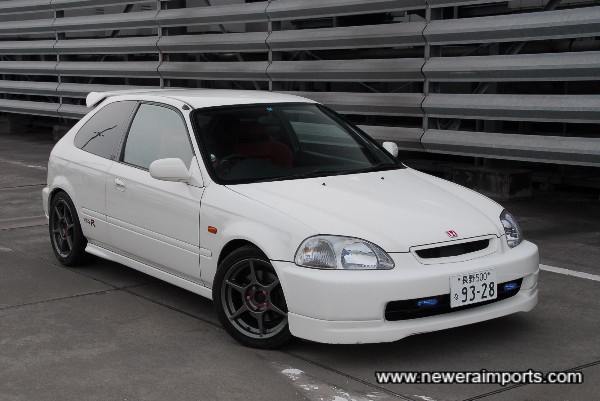 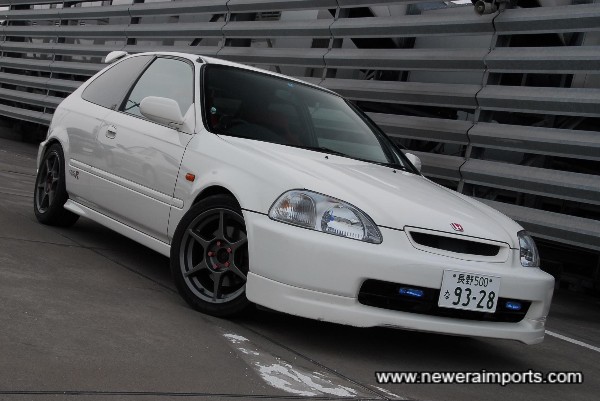 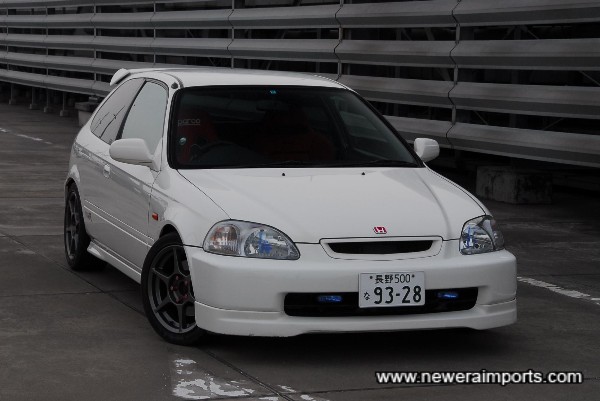 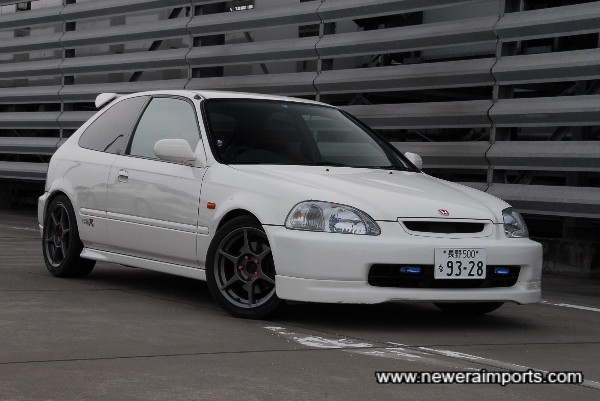 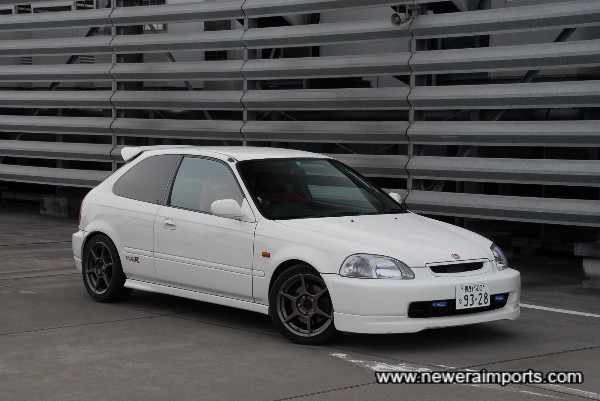 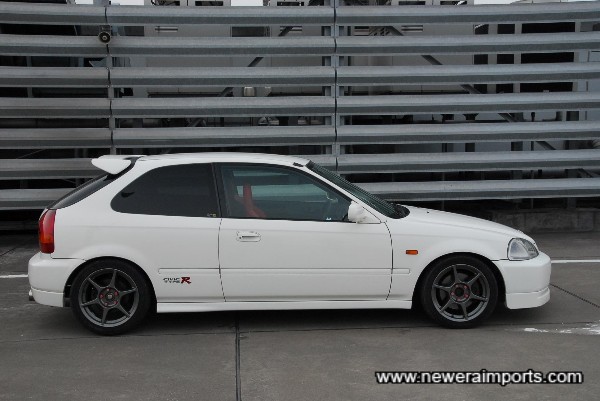 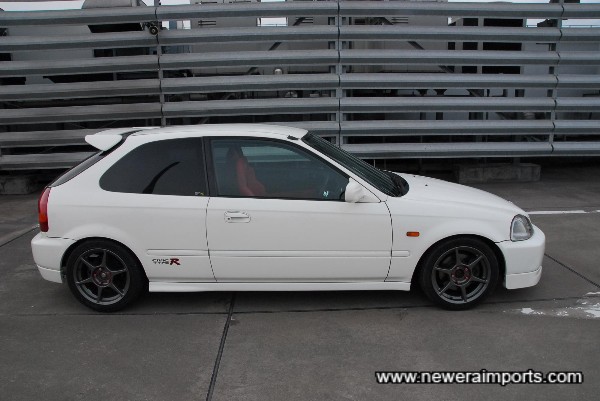 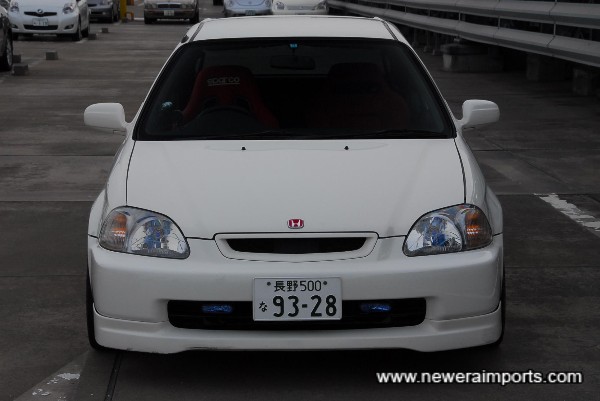 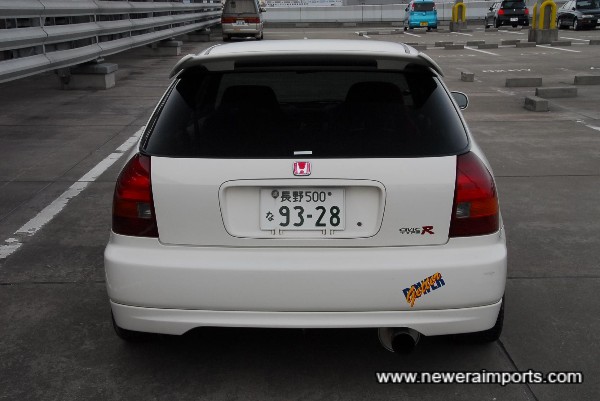 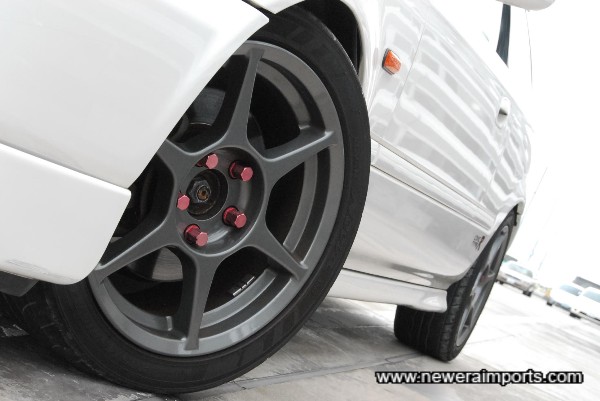 This EK9 Civic type R was sourced to special order for a Finnish customer wanting a top quality high spec EK9, that would be registered in UK, so it would then be easy to import onward to Finland as an EU import. The customer wanted an original car originally, but then began to change his mind as he planned lots of modifications. So we sourced a stunning example with well chosen performance modifications already fitted, thus saving him a bundle of money in the process!
The Type R philosophy is not about building the most powerful, or fastest car for straight line performance. It's about creating a car that provides a well-engineered, but exciting driving experience better than available elsewhere! To offer this, every Type R needs to have certain key characteristics: Racing pedigree, pure lightweight focus on handling with no unnecessary weight or equipment. Going fast is part of the Type R experience, but not everything. Equipped with double wishbone suspension, the Type R has very strong levels of handling in addition to performance in gear change quality, braking, steering and handling. Also of course, there's the engine - Much like a racing unit even in standard tune. 185 bhp from a 1.6 litre engine is one of the highest specific power outputs of any n/a production car ever made!
Because of the above attiributes, styling and driving dynamics, the EK9 Type R is considered by many Honda enthusiasts as the ultimate Civic. Make no mistake - this is a far superior driver's car than the UK built EP3 Civic Type R. The Japanese have never really got to grips with the EP3, but have done extensive work in producing tuning parts to make this serious pocket rocket even more balistic... This is the wildest FWD N/A car ever made and was only officially sold in Japan from 1997-2000. No other countries received this top machine. Factory Specification: Lightweight spec. Civic Type R 1,600cc DOHC V-Tec. EK9. Honda Racing White. 5 Speed Manual. Equipment includes: Carbon finish interior trim and dash surround, Air Conditioning, Power Steering, Power Mirrors, Fitted Mats, Privacy Glass on the rear, Rear Spoiler, Double wishbone suspension, etc.
Includes the following high spec modifications: Ohlins Coilovers, Buddy Club P1 alloy wheels, Zero 1000 induction kit, Samco Radiator hoses, NGK / Apexi Racing ignition lead set, Apexi Power FC ECU Commander, Fujitsubo Exhaust (Cat Back), Close ratio gearset, 2 way LSD, Pivot shift light, Omori vaccum gauge, HKS water temp gauge, Momo Steering Wheel, OMP seat (Replaced with a Mint condition original EK9 matching Recaro Driver's seat),
Our verdict: It’s got some excellent additional modifications that really help make it perform better. We discovered it’s got a limited slip differential, which means you’ll not be getting any inside wheel spin when really pushing it out of corners! Ideal as the Ohlins suspension soaks up bumps without being harsh really allows this car to be pushed hard! The gearbox also appears to benefit from a close ratio conversion, so as soon as it’s on V-tec mode this car just stays there!! The Apexi Power FC is evidently well tuned too and with the induction kit and exhaust fitted, it sounds awesome and goes like a scalded cat!!. Clutch is also uprated, by the way. It’s not harsh, but we know it’s not standard but heavy duty – ideal for hard starts / acceleration. Brakes are also very strong and it would appear the discs have recently been changed too. The gear knob will come later with the car’s documents. With the selected modifications on this and the car’s condition it’s evidently been very much a well loved car. It’s an awesome example, considering it’s age! Some nice touches, like headlights not yellowed, with the front indicators set to glow orange when the headlights are on… Makes it easy to know this car’s following you. This car’s one of a kind J!
The pictures were shot in Yokohama (where we keep cars in stock in Japan) before bringing it back to our offices at the outskirts of Tokyo. To prepare for shipping, we had the front splitter removed and resprayed along with the rear bumper painted. Also the light dent on the front passenger wing was pushed out and painted, with the side skirts repaired – The result: A mint EK9! J!The car is of auction grade 4 (Auction sheet available). Clearly it's been garaged or kept under cover as the paint's in excellent condition, not faded and even the headlights still look like new! Note the missing trim at the rear C pilars. Good used parts were found inexpensively to complete the interior.
Stunning machine this.... The customer has at this point only heard what's in store. Having driven it ourselves we know it'll definitely bring a massive smile to his face. This is a seriously well sorted pocket rocket which has no right to be quite as quick as it is!! He's also taken the opportunity to source further FEEL's, Mugen and Spoon tuning parts and cosmetic items, to tidy the engine bay through www.neweraparts.com Make no mistake, this is one scweeeet EK9 that's bound to upset some larger more powerful cars on Finnish roads shortly !!
Sick of seeing rubbish quality EK9's elsewhere and want the best for your money? - Contact us if you'd like a similar high quality EK9 sourced for you!