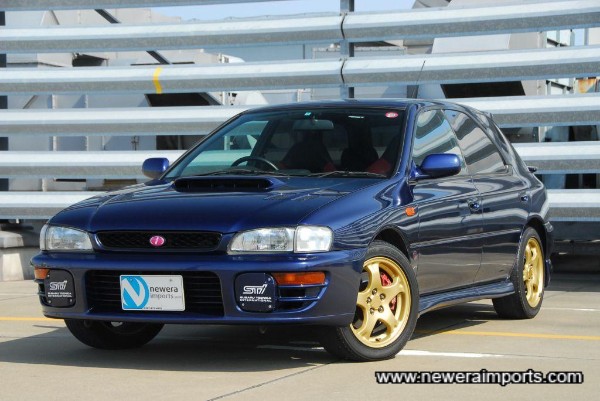 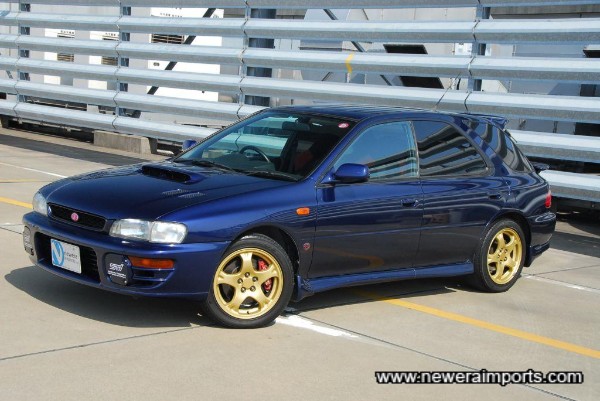 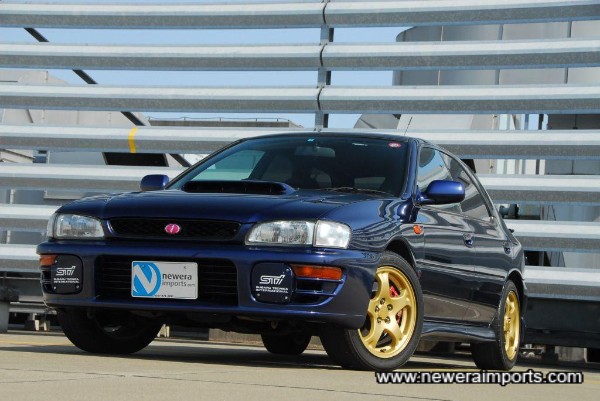 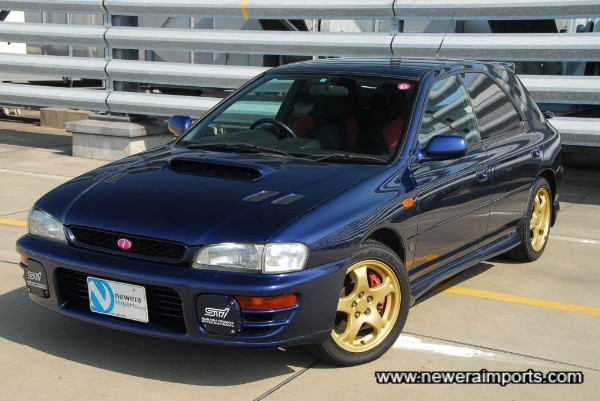 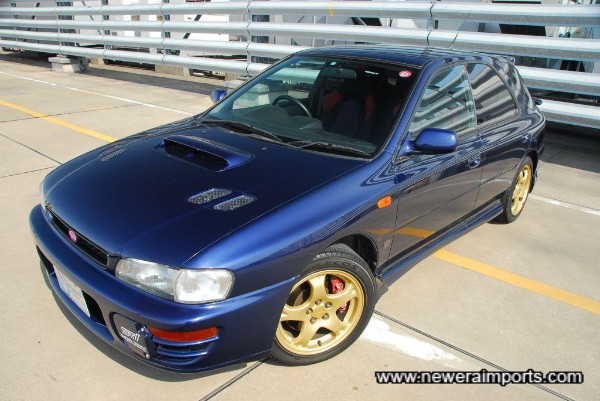 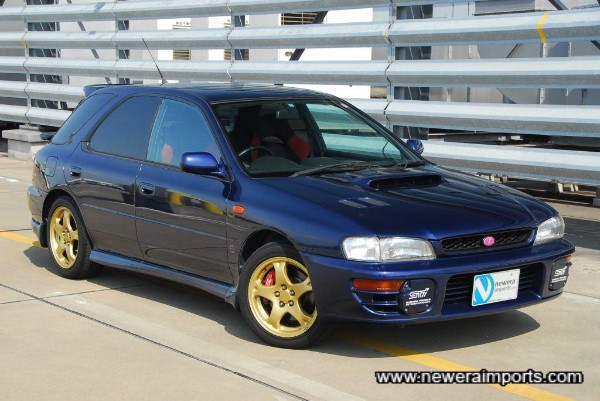 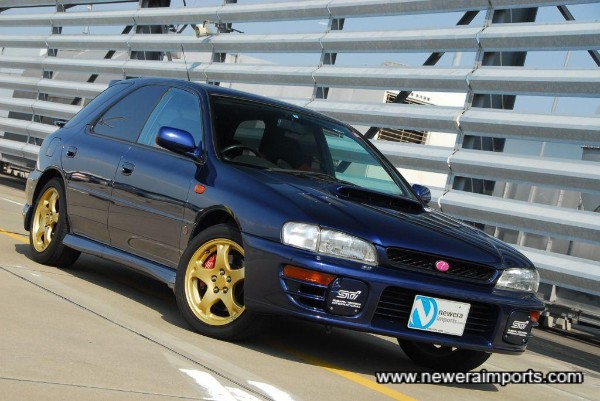 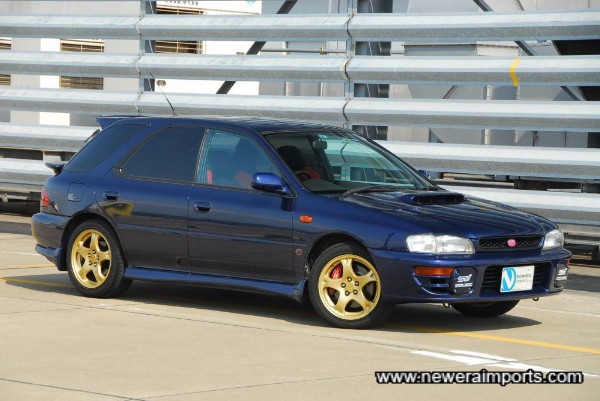 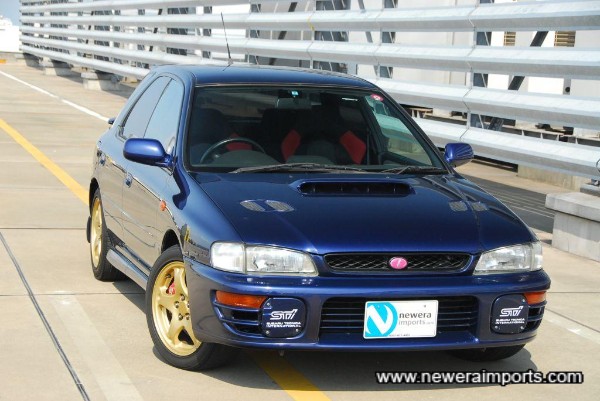 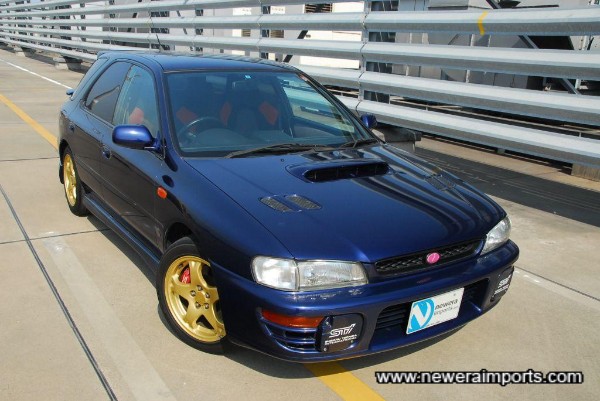 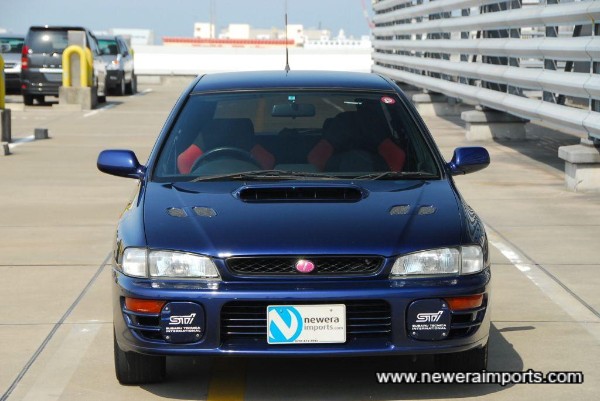 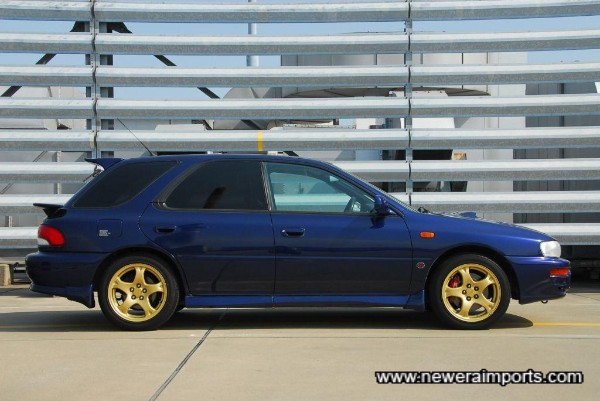 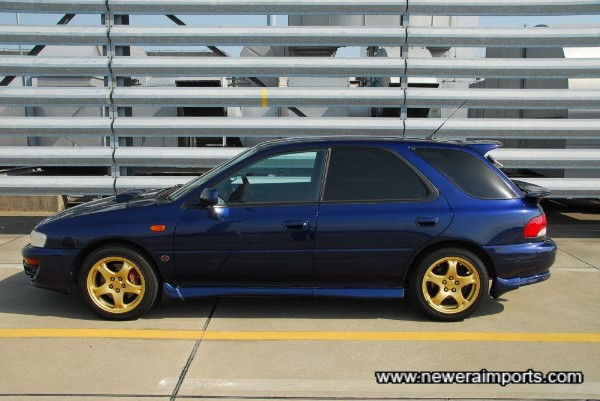 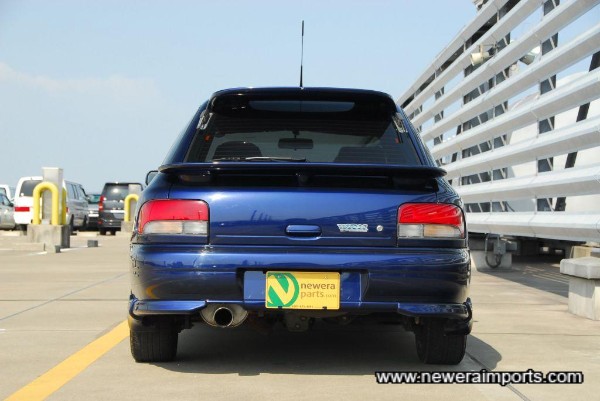 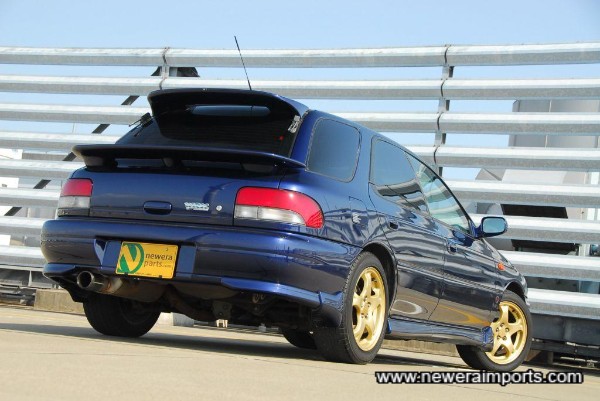 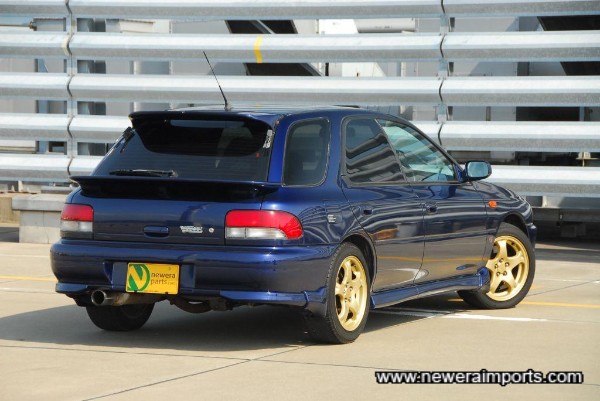 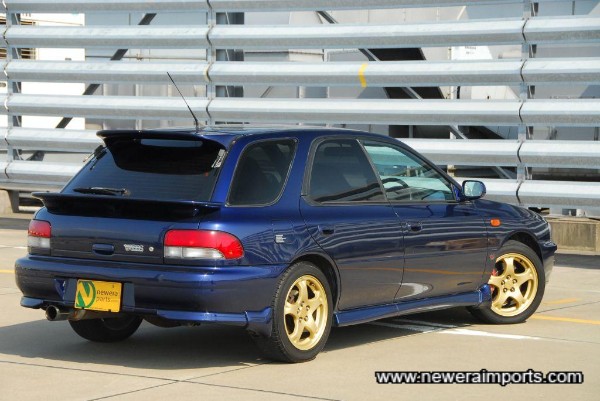 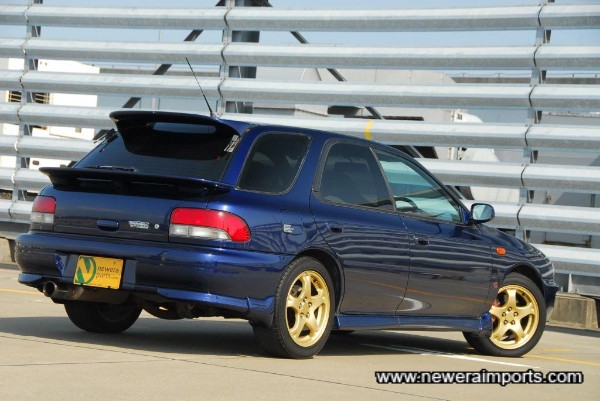 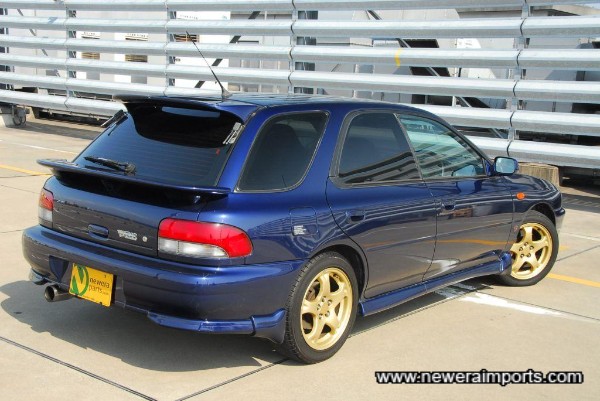 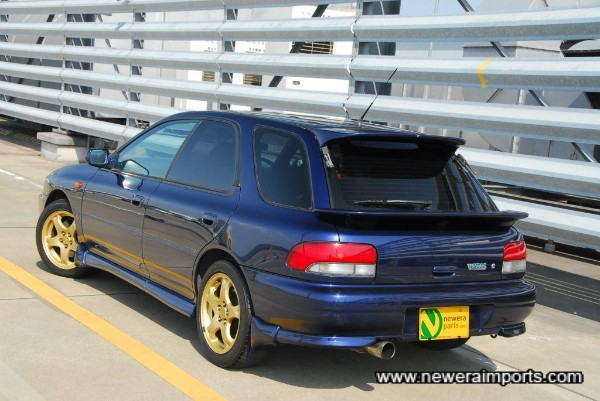 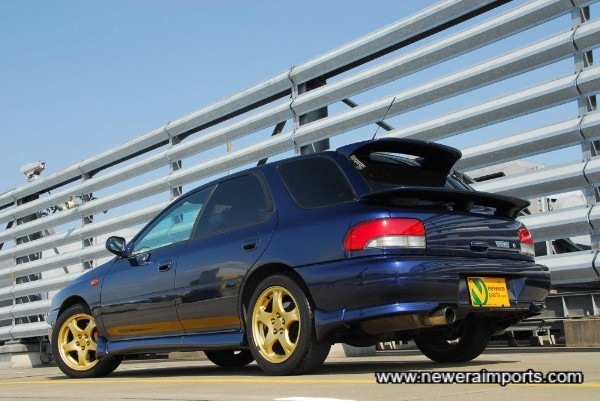 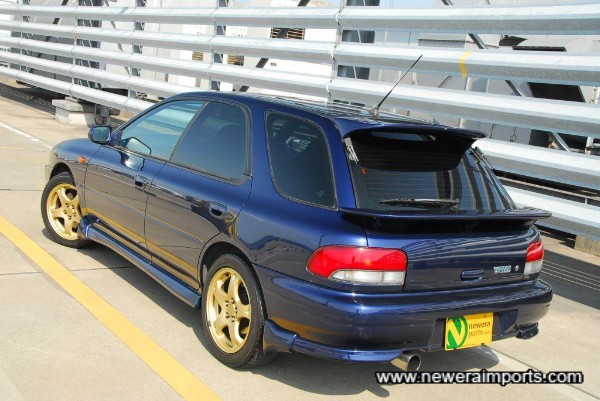 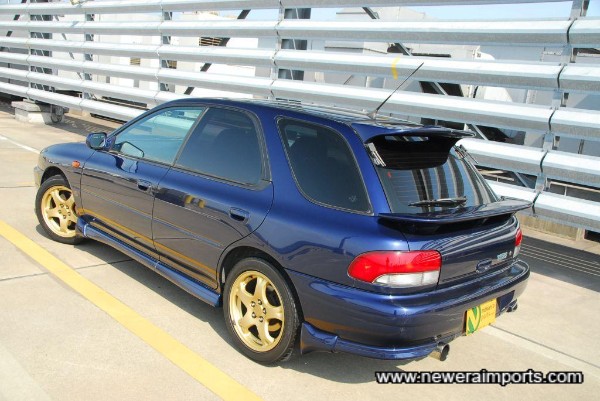 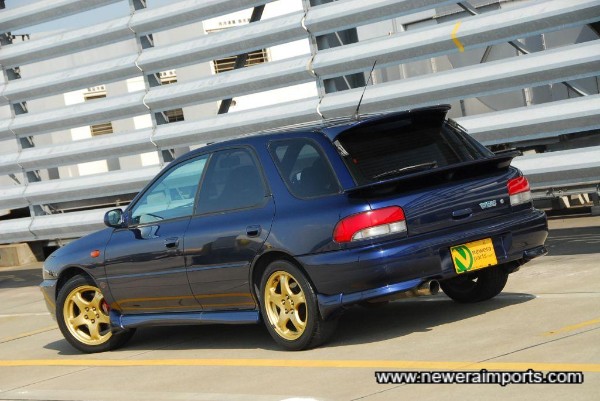 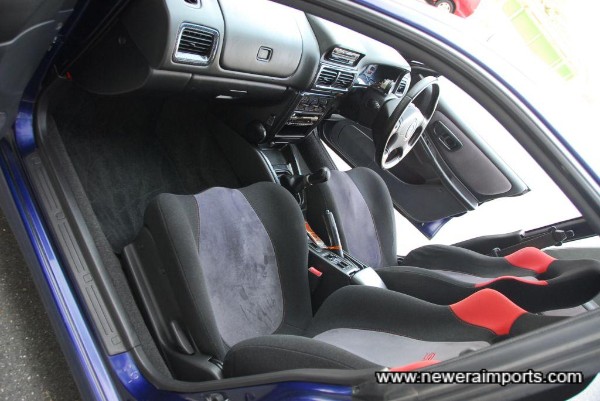 
The STi Version 4 Wagon is one of the most interesting and capable of the classic model 5 door Imprezas. A model only built for the Japanese domestic market officially. It was on the previous model STi Version 3 that Subaru chose to introduce 4 piston signature front brake calipers with 2 piston rear callipers to match. The engines are Sti Blueprinted units with stronger internals incl. better camshafts, valve springs and larger turbo combined with an 8,000 rpm rev limit (Normal WRX's are 7,000) packing 280+ bhp as standard. The STi 4 is also distinguishable by it's updated vented bonnet, light green tint on windows (Privacy glass on the rear), updated rear spoiler with integrated central brake light and the red and white rear lights. The Sti 4 interior was also of a brighter design than previous versions, with embossed front seats white dials with a digital odometer. The air conditioning controls were also updated and a driver's SRS airbag included with the Momo leather steering wheel. Further mechanical improvements from Subaru Technica International include a carbon look interior trim, carbon fibre front strut brace, uprated intercooler, full Sti Exhaust. This is a full option car which also includes a Kenwood TV on the upper display, as well as a Sony 200W CD / Radio head unit. Note that all audio equipment is supplied free of charge. Tyres are approx half worn Yokohama DNA Ecos sports tyres of standard 205/50R16 size.
For the sports driver who wants reliable high capacity load carrying capability without the weight penalty,outstanding 4WD road holding, STi performance and reliability - this is the wagon to own. Better dynamically than the later heavier and more watered down bugeye STI wagons, performance for money - you'll be hard pressed to find better. Classic Impreza Sti performance - with all the practicality of a normal 5 door wagon. This car's in standard condition aside from the uprated audio and an earthing kit in the engine bay.
Condition: Our full array of pictures will speak for themselves - to show the outstanding condition of this Impreza STi 4 Wagon. Note the rare colour - only a handful were made in this rare dark metallic blue. It's got a deep tone to it, a colour that evidently lends itself well to polishing if, like the last owner you're that way inclined. If you've been looking for the very best you can find - then you'll know this is it. Note especially the complete lack of any rust at all on the underside and the unmarked interior. This is a grade 4 car of genuine mileage (Auction sheet is shown with picture show). Note: IIn order to reduce the time to complete the car for our customers, we have had minor scratches to the bumpers professionally repaired in Japan prior to photographing.
This car's clearly been well cared for and regularly serviced. The timing belt and associated pulleys tensioners were replaced by Subaru at 99670km (61,945 miles) on 15th April 2008. Condition is outstanding - with only the following minor faults (they're all too minor to repair, but mentioned to give a complete and accurate report): There's 2 minor etch marks on the bonnet from bird droppings. The driver side dummy driving light cover has been touched in. Light (Possibly polishable with compound) scratches on the driver's wing.On the passenger door mirror there's a 2cm scratch. n/s/f wing has a small pin dent and there are 2 small pin dents on the passenger front door. Where the full UK en, the car will be polished before delivery so some of these may be removed in any case. Interior's in excellent condition with no faults to report (This has been a non smoker's car since new) aside from normal wear to the gear shift knob. There's no visible wear on the leather steering wheel.
Test Drive: Mechanically it's also in perfect condition. Strong power with good response, a nice quiet engine with no noisy valve gear or signs of a hard pushed engine. Note Brake discs usually suffer from heavy wear on Imprezas - if driven hard for most of their lives. This example's discs are visually in very unworn condition. We test drove this car after warming up - which revealed a very tight feeling car. Over a bumpy road there were no rattles or squeaks. Clutch has plenty of life left and brakes feel strong and disc-warp free (Another usual fault on Scoobies - but not on this one!). There are clear signs this car's been well cared for and regularly serviced. Oil has also recently been changed.
Since April 2004, a model report has been required when SVA testing any car of newer manufacture than 10 years of age at first registration in UK. Although there are model reports for Sti 7 8 wagon models models, there are none available for the classic STi Impreza models. This mean that only pre 10 year old 1999 Imprezas can currently be imported to the UK. As most pre 1999 Imprezas in Japan are too tired nowadays, or just too expensive if in top condition and low mileage - we are usually unable to supply these. We simply won't buy a car for you that we wouldn't want to own ourselves were we looking for the same.
This Impreza Sti 4 Sports Wagon in exceptional condition has now arrived to UK. Inclusive of full UK conversions de-restriction, new MOT, Paintwork as described, Road Tax, Registration, 12 month's comprehensive warranty and a full valet just before collection, this car is priced at £4,995 OTR. Viewing is available by appointment at the Canterbury (Kent) site.
A deposit of £1,000 secures this car now. contact us for full information on how to reserve this Sti Version 4 Wagon. Please note: Once it's gone we'll probably be unable to find another this good for stock. They're virtually impossible to find this nice any more - if you want the best for your hard earned money, this is it.
Newera - Recommended widely by Forum members, UK tuners and Magazines as the no. 1 supplier of the best quality imported cars. Also supplying ALL performance OEM parts.