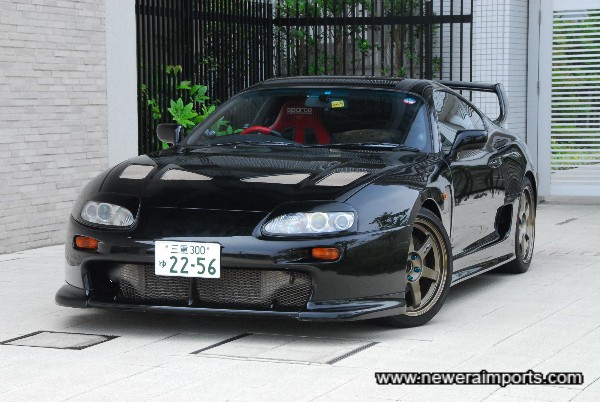 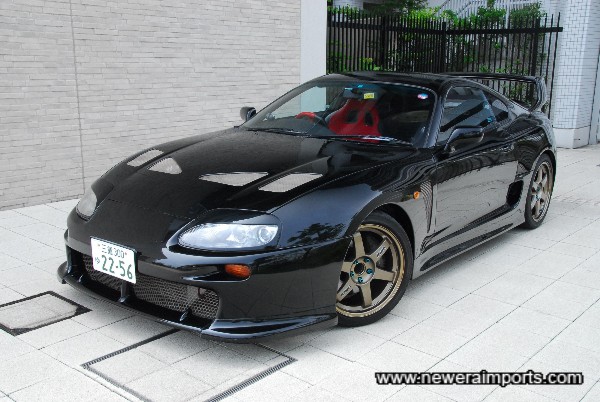 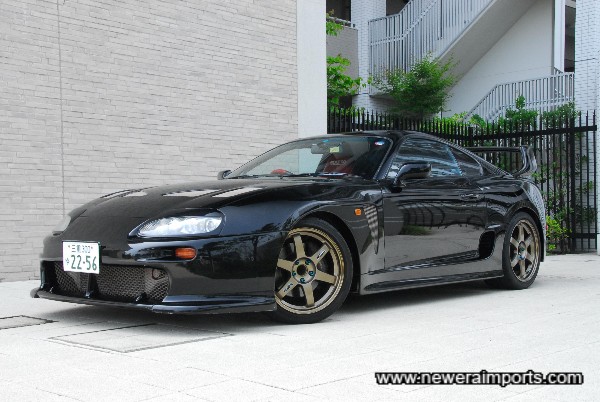 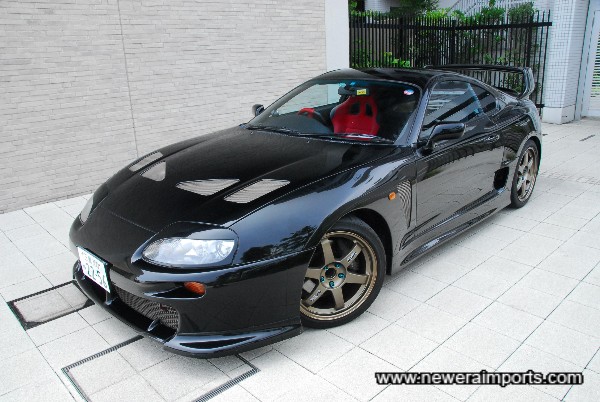 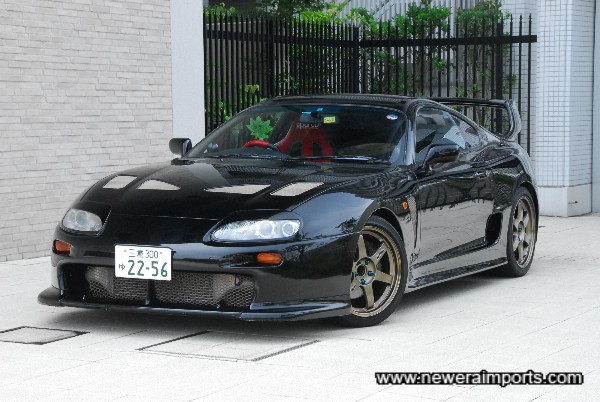 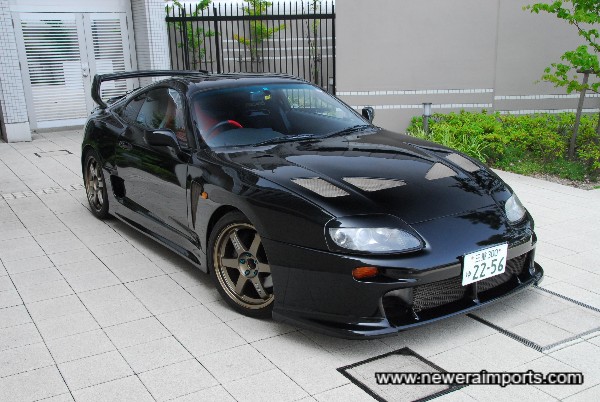 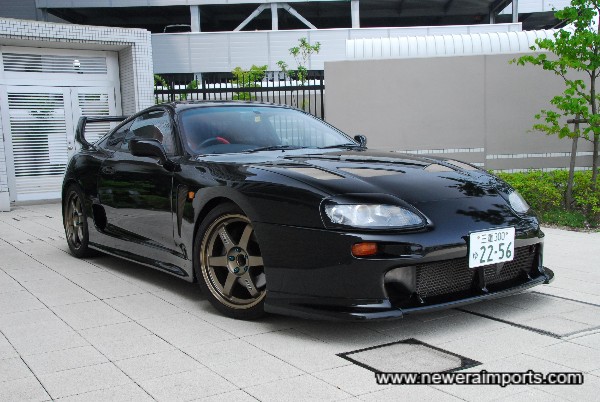 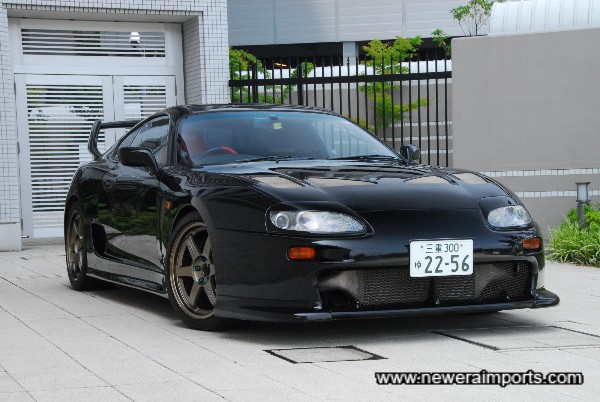 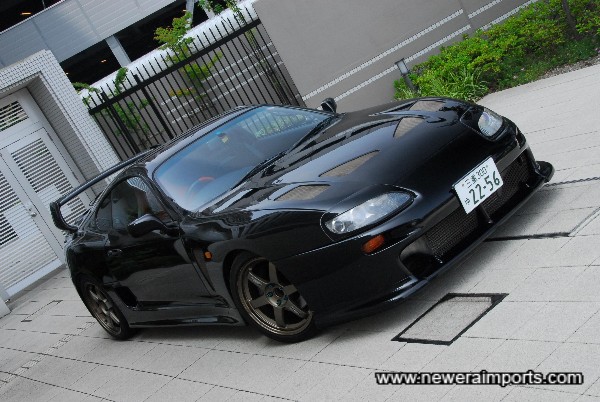 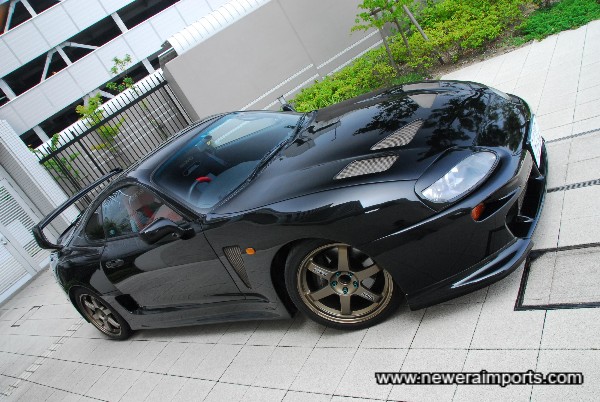 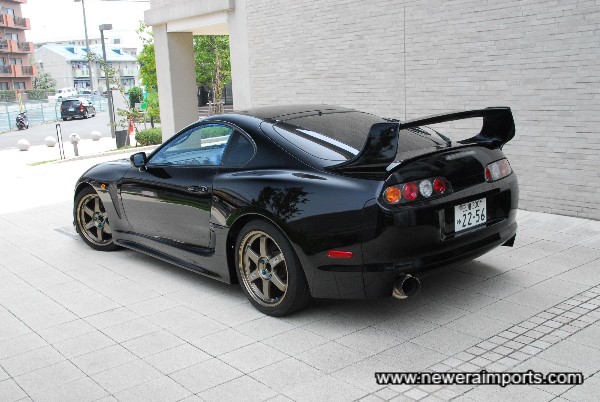 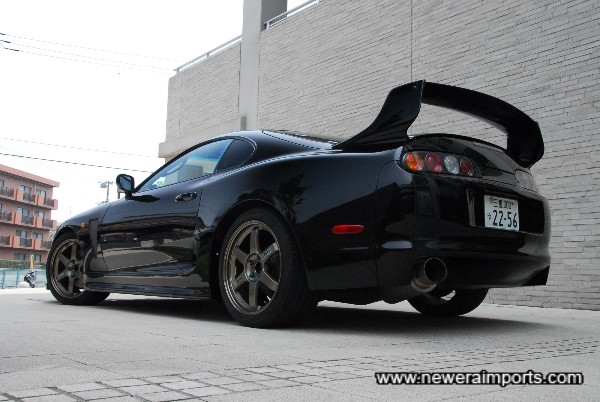 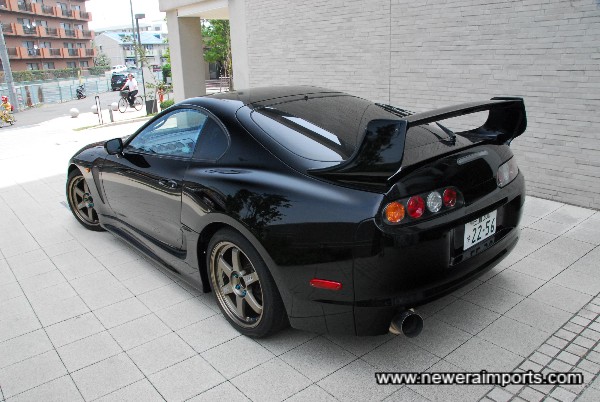 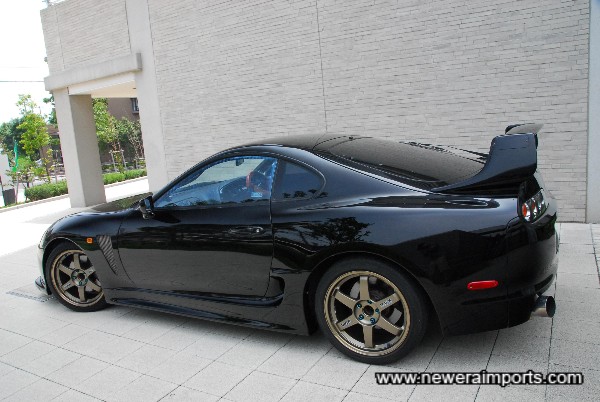 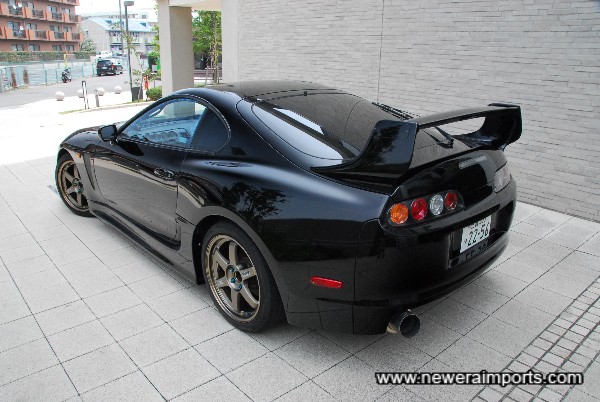 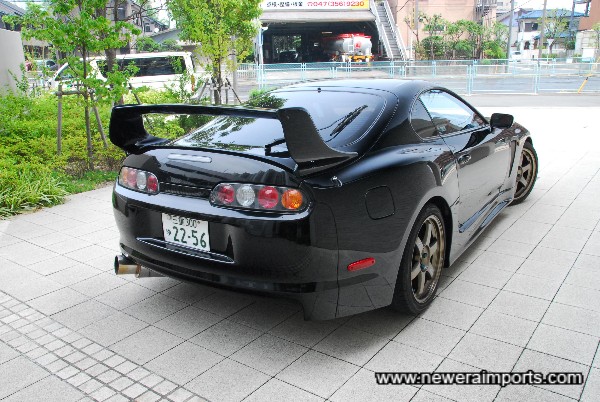 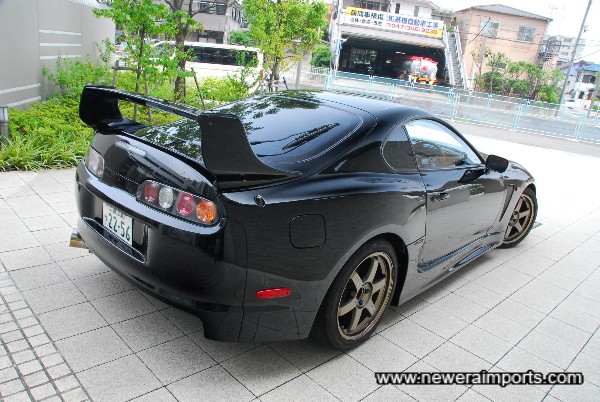 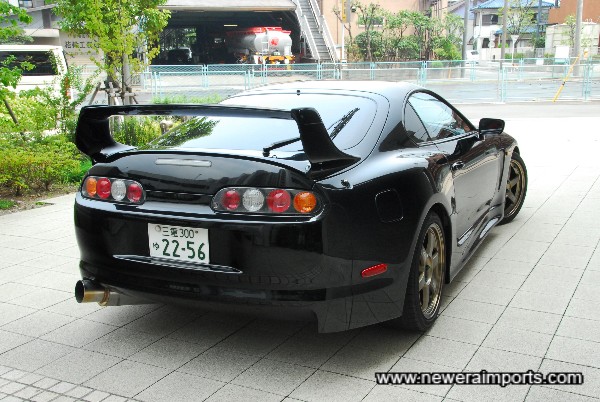 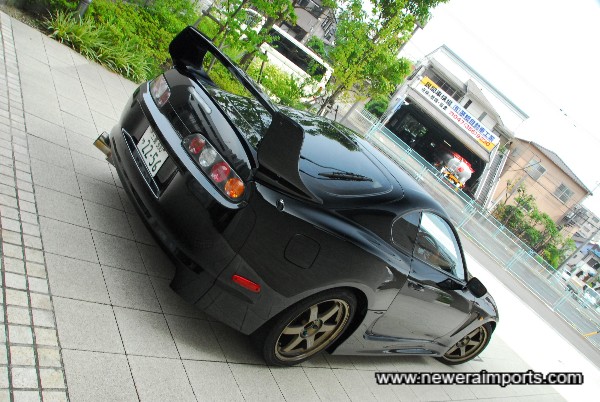 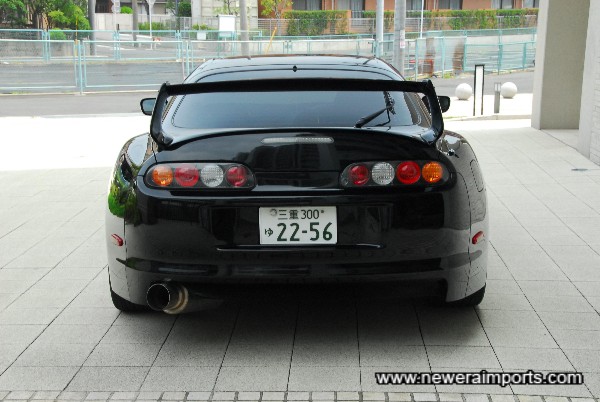 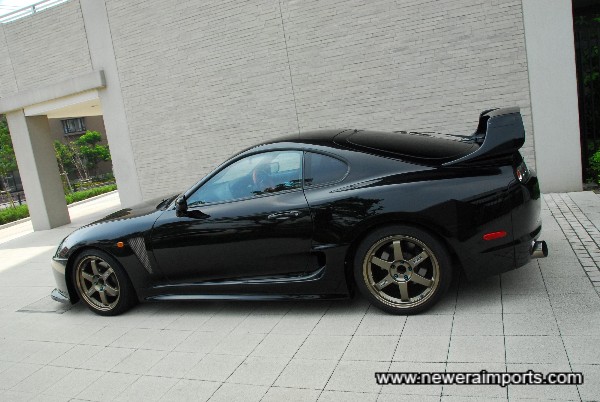 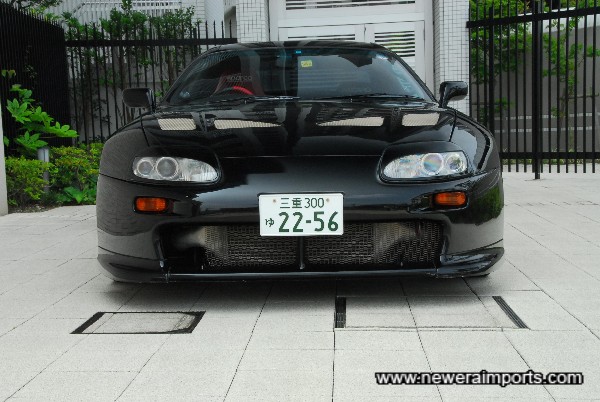 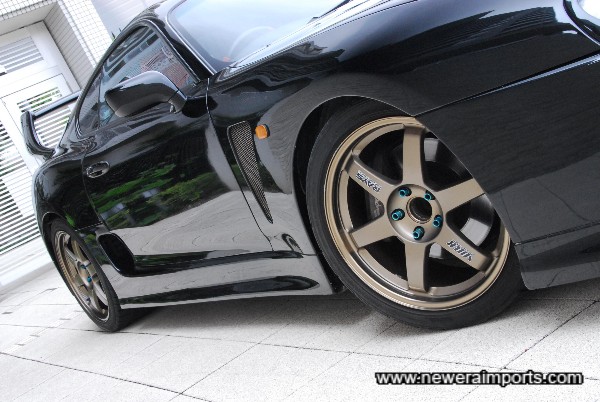 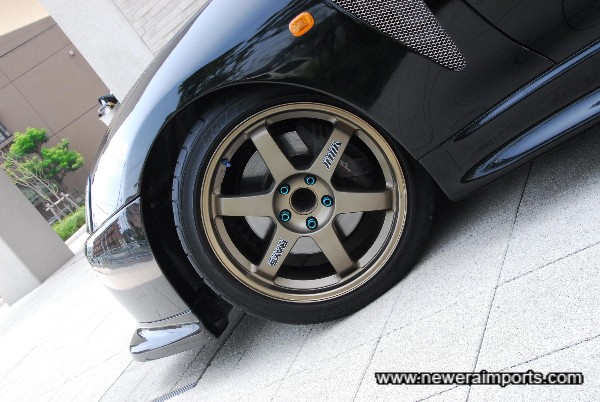 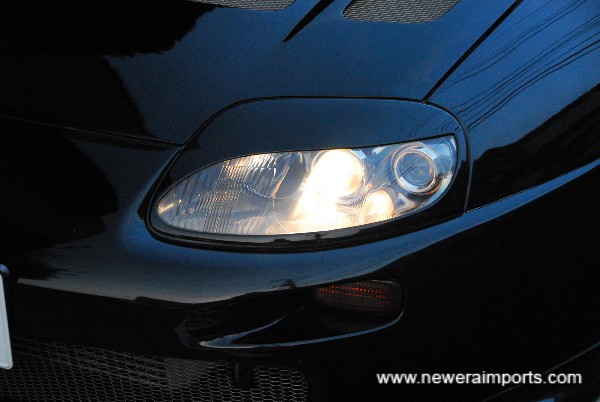 This Supra 3.0 Twin Turbo 6 Speed has been extensively modified including fitment of a very rare genuine TRD 3000 GT wide body kit. Currently on hold awaiting payment from a customer this car took over 4 months of diligent searching and rejection of various examples that weren't up to our standards of excellence. The bodykit alone costs around £5,000 to buy from TRD, without fitting and painting. In all over the years, around £25,000 has been spent improving this car with performance parts and it's been very well maintained.
Bodykit, brakes suspension modifications Include: TRD 3000 GT front fenders, rear fenders, rear bumper, front bumper and under diffuser plus TRD Type S rear wing and bonnet. Headlight eyebrows are also fitted. Wheels are 18” Volk Racing TE37’s with Dunlop Direzza DZ101 235/40R18 (Front) Yokohama Advan 265/35-ZR18 (Rear). Wheel nuts are lightweight alloy blue anodised Wedsport items. Note that wheel spacers are used both front and rear to increase the track in line with the wider fenders at each corner. Brakes are the larger signature type featuring 4 piston calipers at the front and 2 piston calipers at the rear. Hoses are braided. The suspension has been uprated with Apexi N1 coilovers which appear to have been supplied originally by Tom’s Toyota specialists – as the springs have their logo on.
Power modifications: M’s KN air cleaner, Splitfire earthing kit, Large front mount intercooler with hard pipe kit, HKS SQV Blow off valve, TRD tower brace, oil filler cap and radiator cap, Amuse hi-tech ROM ECU, Apexi N1 exhaust, HKS EVC 3 Boost controller. Clutch was described by the previous owner as being a TRD 2 piece unit. Car was recently dyno’d and made 422 bhp.
Interior modifications: TRD 320 km/h speedometer, TRD shift knob, Carbon fibre dash panel, door panel and centre console panel, Momo Comman flat bottomed steering wheel, HKS glove box meter panel housing Greddy Water Temp, Oil Temp, Oil Pressure and Exhaust Temp Gauges. Also boost gauge is located where one of the vents on the dash would originally have been placed. Also fitted is an HKS turbo timer and what looks like a radar detector. There’s a Sparco fixed back seat and a Recaro reclinable seat on the passenger side. Note also the Sabelt 4 point harness on the driver’s side and sports mats. Audio consists of a high quality Pioneer DEX-P01 head unit with a Carrozzeria (Pioneer’s Japanese brand) component amp and a kicker baby subwoofer in a custom made housing. The original central locking’s been disabled and locks are now operated with a Hornet remote control. Finally, in the footwells there’s red interior lighting when the headlights are on. Note also the fog-light switch on the dashboard. There is a satellite navigation system fitted – this will not work outside of Japan, however.
Total costs to create this car from a standard example would be in the region of 5,500,000 - 6,500,000 Yen in Japan (£Approx £25,000 at today’s rates) – so it represents something of a bargain for what it is!
Condition of the car’s excellent. It has no rust at all, not even on the chassis. The bodywork’s generally good. Note that this car was originally Silver but was colour changed to black when the TRD 3000 GT kit was fitted. On close inspection we noticed some cracks where the TRD rear fenders are attached to the remaining sections of original metal fenders. We also noticed some minor cracks to the underside of the skirts and to the leading edges of the front diffuser. Note also the missing piece of mesh on the front bumper. Each of the faults described above are minor and can certainly be left as is. As it is now the car looks very good presentable – but being perfectionists we notice every fault and so describe them! J There are minor scratches to the wheels also.
Interior has a couple of minor faults to report also.We’d recommend whilst the car’s still in Japan getting either another used matching Recaro seat, or switching both seats for matching reclinable Recaros. The floor mats are also prone to sliding forwards. Sourcing replacements when the car is in Canada will be considerably more expensive due to carriage costs. Some new fitted mats with heel pad for driver’s side are inexpensive and will improve the quality of the interior noticeably. Also we’d be inclined to replace the (Partly worn) steering wheel with a nicer black (TRD?) item and the shift / side brake gaiter with carbon cloth items to go with the rest of the interior carbon modifications. Any parts required can be sourced and fitted prior to shipping by www.neweraparts.com
There are no oil leaks, etc. to report. The timing belt was changed at 98,095km on 24th May 2007 and oil shows it’s been changed very recently – even despite a drive of approx 550km from where it was bought, down to Tokyo – it’s still golden. The battery has also recently been changed for a good quality replacement.
Test drive: This TRD 3000 GT Supra was driven some 550km to Tokyo. We noticed in the current summer climate the water temp will rise when the car’s driven faster due to the thick front mounted intercooler being directly In the path of air flow to the radiator. This car would benefit from a Koyo or similar aluminium replacement. Any parts required can be sourced and fitted prior to shipping by www.neweraparts.com
Were this car going to the UK (Our customer for whom it's held is based in Canada, so this is expected to be the only 3000 GT Supra created in Japan in North America, we expect!) we would have repaired all faults described within the price of £15,295 nely top quality hand picked Supra (Or other model)? Please Contact us for further information of how we can source an example well beyond what's typically available for sale in UK, Europe, etc.
Newera Imports - Consistently the source of only the best hand picked performance cars from Japan.