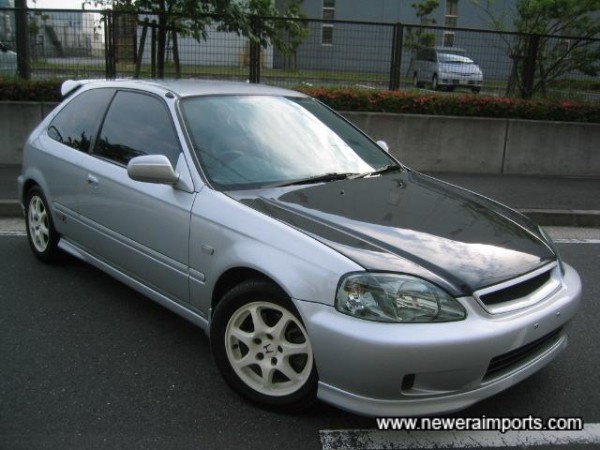 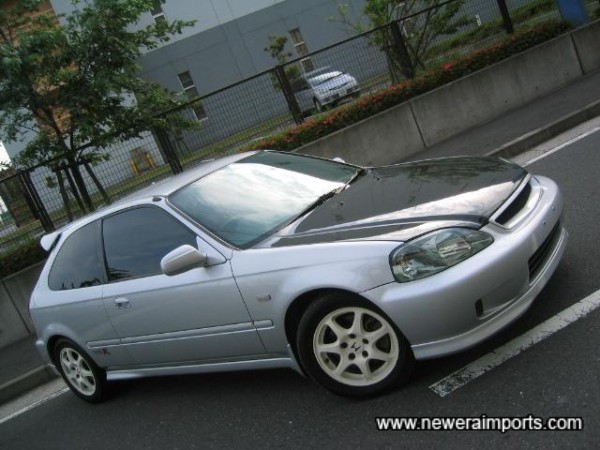 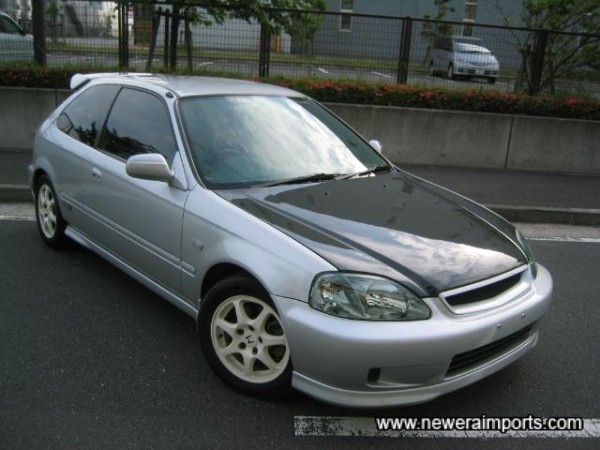 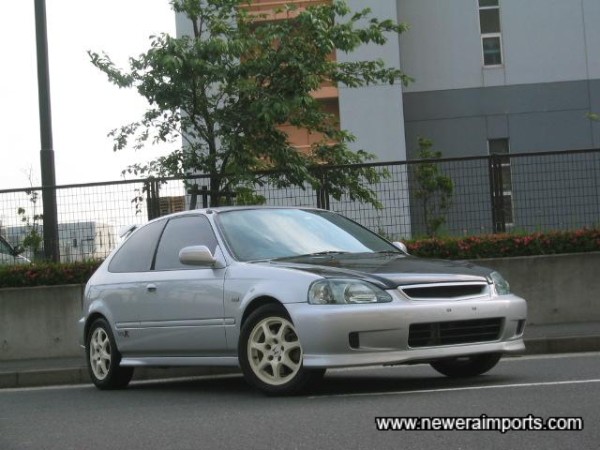 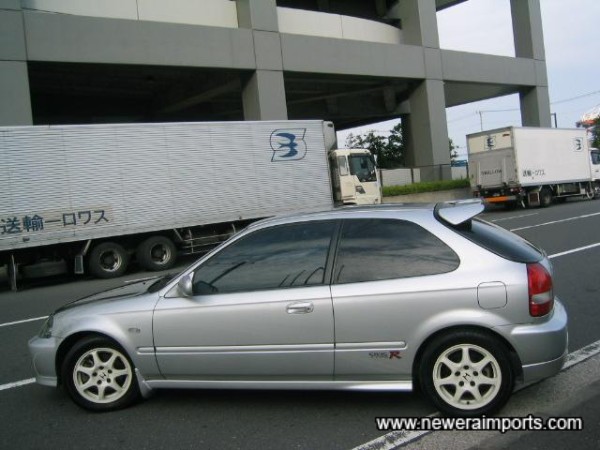 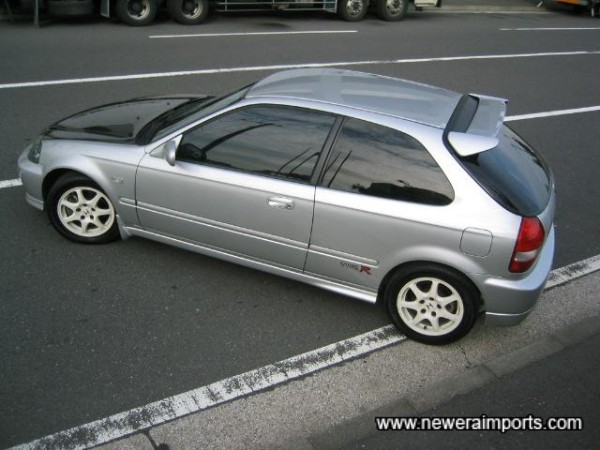 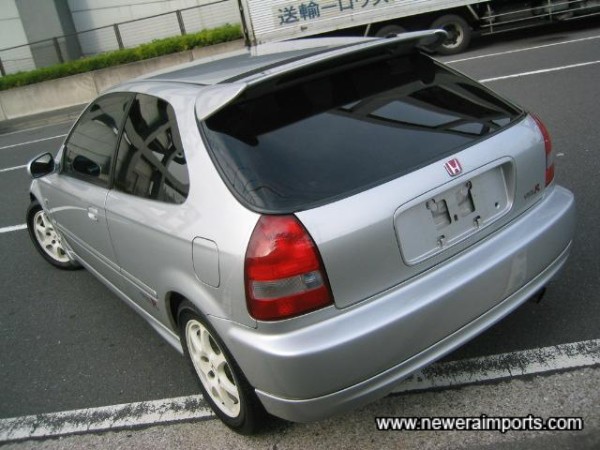 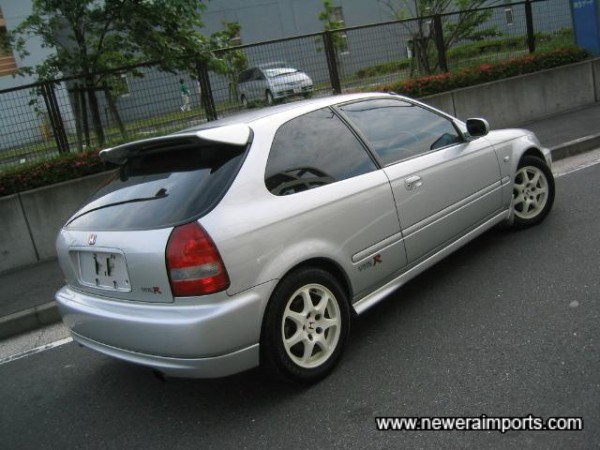 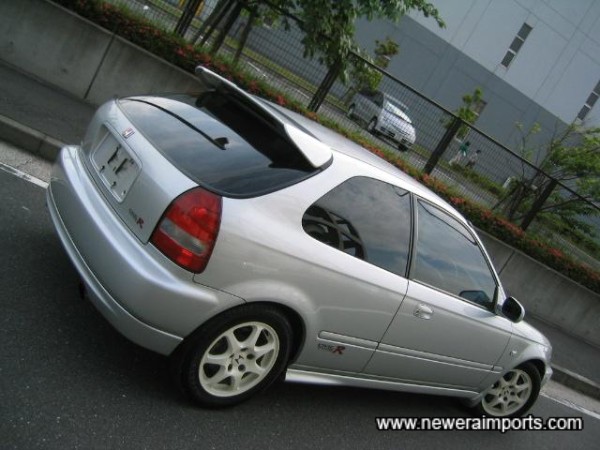 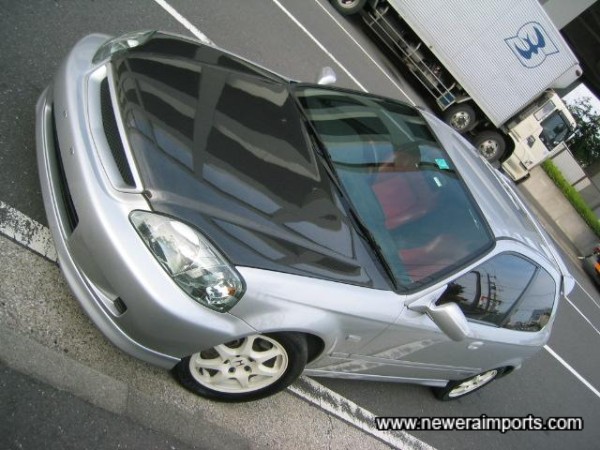 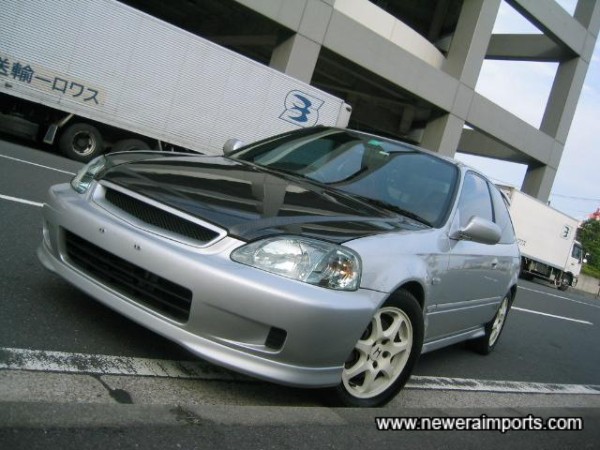 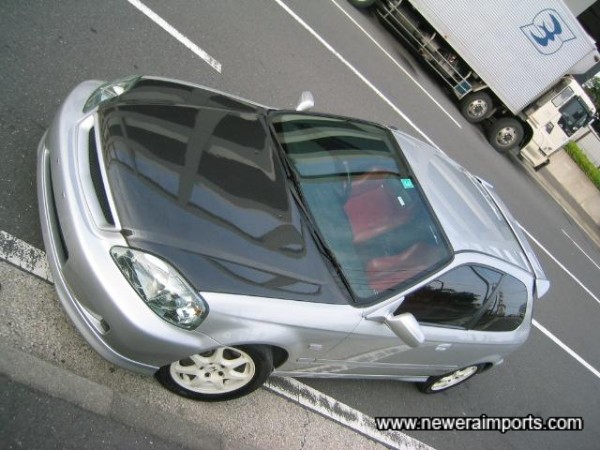 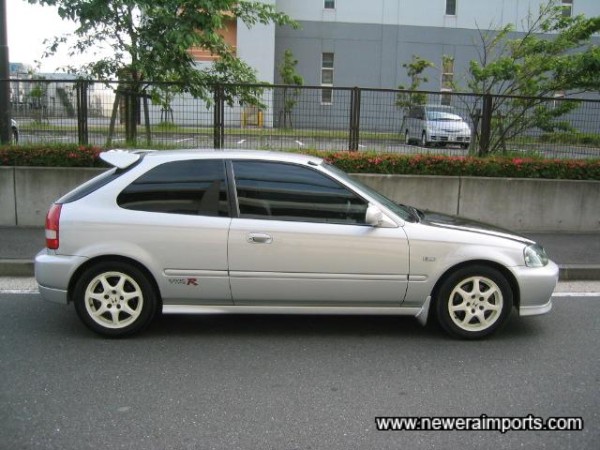 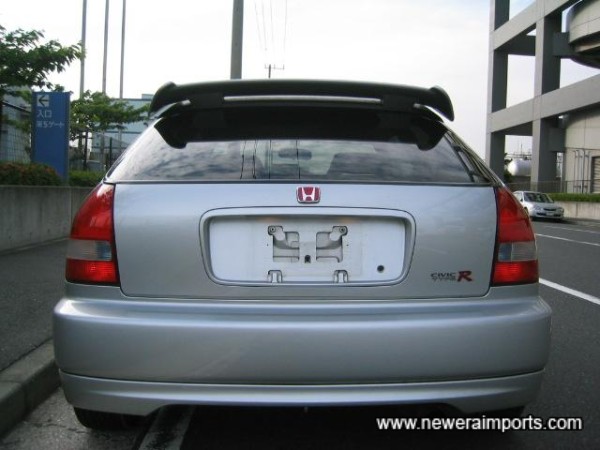 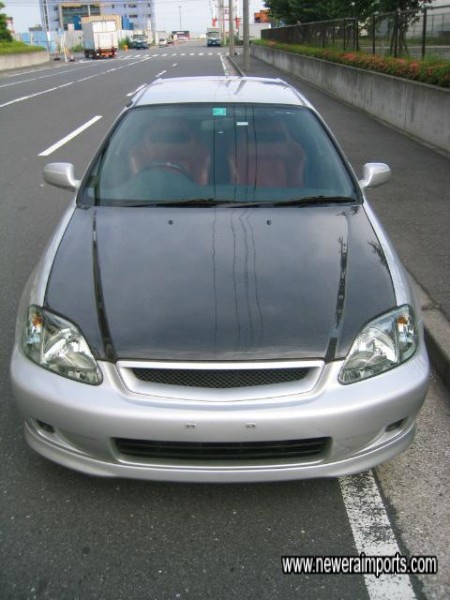 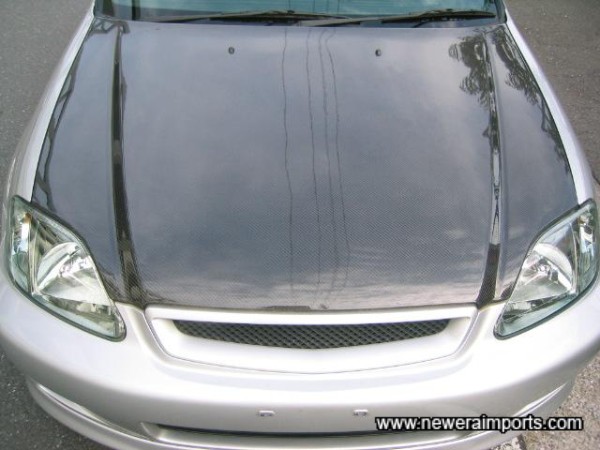 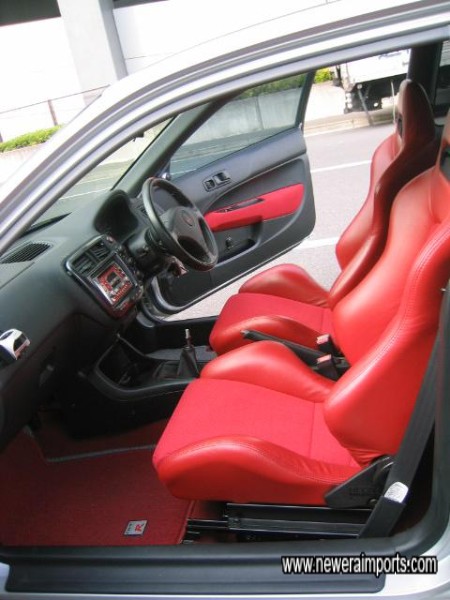 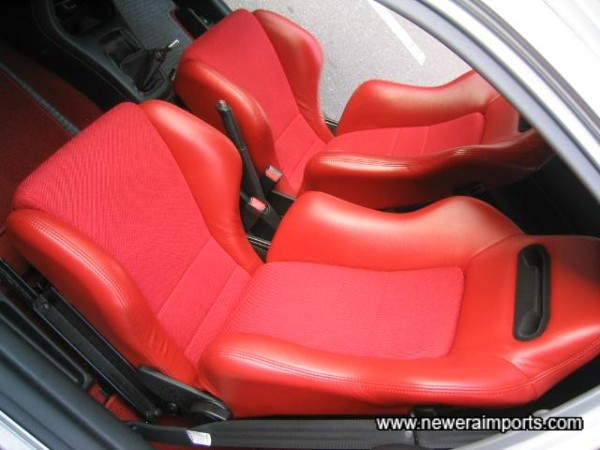 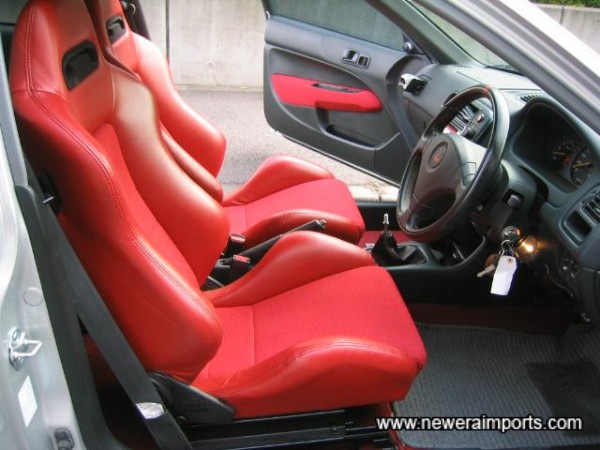 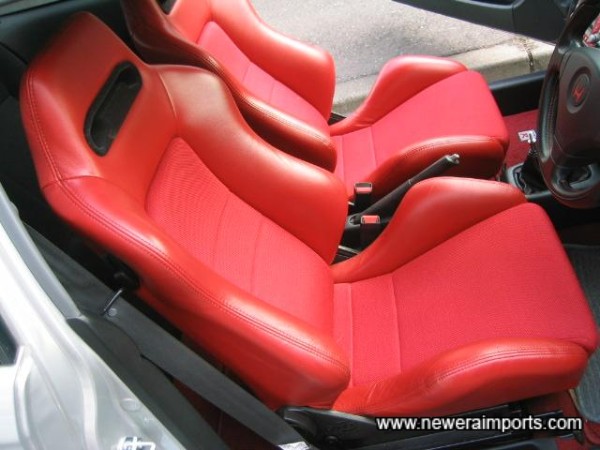 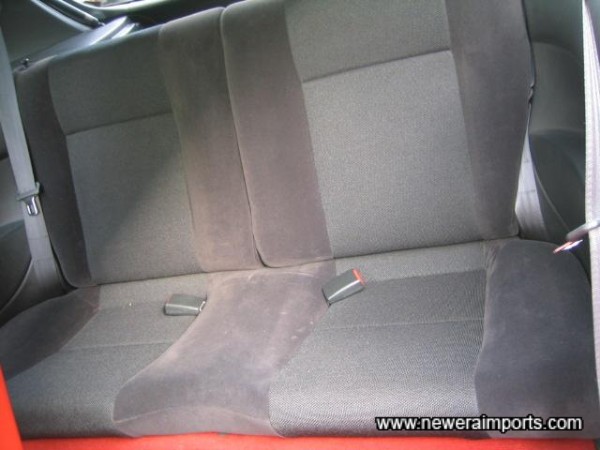 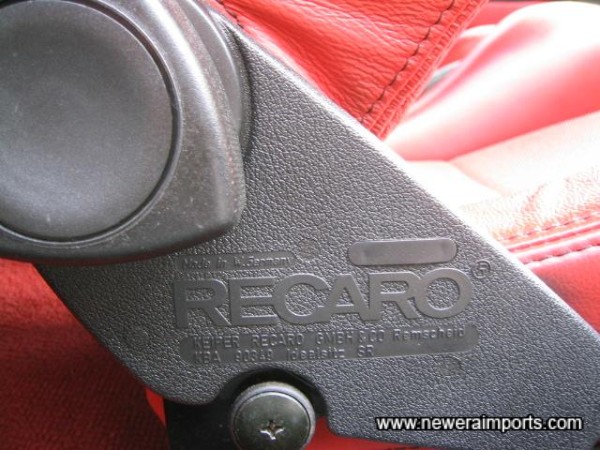 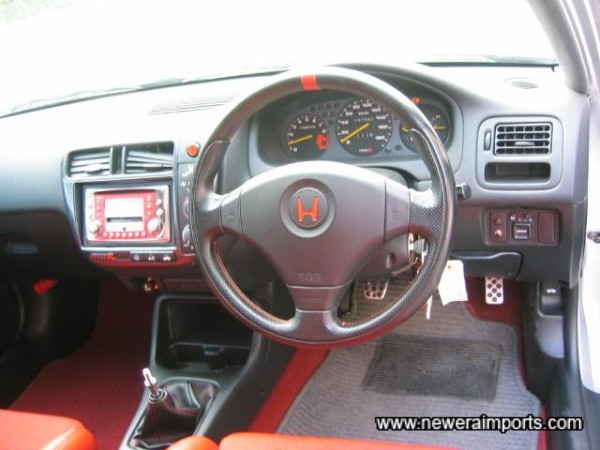 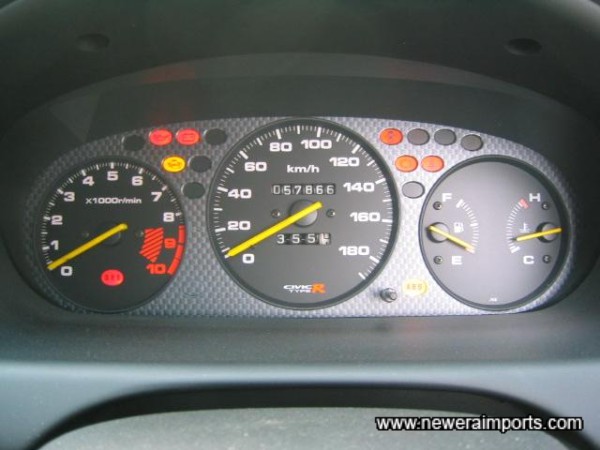 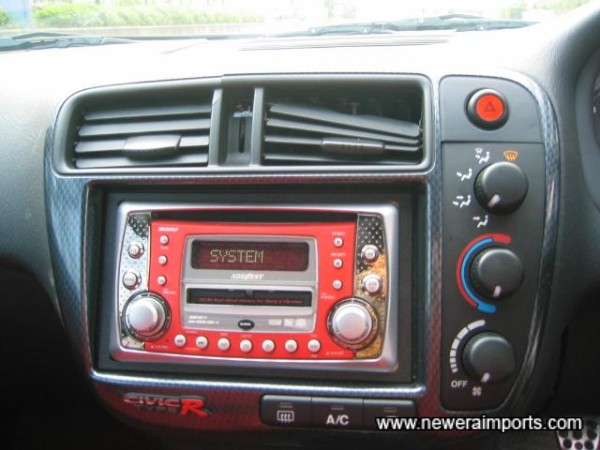 This car was supplied to order. It didn't go to the UK, but to the Republic of Ireland. The customer had become sick of seeing worn out thrashed examples for sale, so he asked us to find him a mint example for his hard earned money. This is the example we eventually found for him. He is absolutely delighted with it!
2000 (March) Civic Type R 1,600cc DOHC V-Tec. EK9. Silver. 5 Speed Manual. Equipment includes: ABS, Dual SRS Airbags with Momo Steering Wheel, Air Conditioning, Power Steering, Power Mirrors with retract mode, Fitted Mats, Privacy Glass on the rear, Rear Spoiler, Original alloy wheels, double wishbone suspension, etc.
This car has been uprated with the following: Varis original carbon fibre bonnet. This is a very high quality item, as shown by pictures. It's as new. It appears the flywheel has been replaced with a slightly lightened one, for improved throttle response. Also, in boxes there are some gears, although not damaged. It would appear that the gear ratios have been improved on this car, or perhaps there was a noisy gearbox bearing, etc. so the gearbox had internals replaced. All the parts are neatly stored in the boot. A monster Panel power filter has also replaced the original, which is in the boot. The headlights have a mild blue tint, which appears to be something after mkt. as I haven't noticed such before on EK9's.
Seats are Recaro reclinable items with half leather. Centre panels are of the same cloth type as the doors are trimmed with. These are either a special option or after market. They are of the same design shape as the suede items normally fitted to this model. Note the holes below the head rests (black) are trimmed in suede material, rather than black plastic). These seats are in as new condition.
The hifi is an Addzest DMZ616LP 200 Watt CD / MD / Radio unit (Will need a radio waveband expander for radio to work in Ireland. Also there are uprated speakers fitted and possibly a small auxiliary amplifier. It appears that either the last owner or someone else tried to remove the hifi before we purchased it - but didn't know how to, so the trim around the hifi has been broken and also the air vent. As removing the hifi properly means removing all of the centre console, as well as the trim beneath the hifi - to get at 4 small bolts holding the frame from beneath, rather than risking someone ripping the dashboard in Dublin, trying to steal this hifi, we took it out carefully, leaving the frame and wiring - by unplugging the connector from the back of the unit. We also also glued the crack carefully and repaired the broken vent using epoxy resin, then reassembled.
The car is of auction grade 4. Condition is outstanding. Interior has no faults to report aside from the centre console, as mentioned. This has been a non smoker's car since new. The last owner was so particular about keeping the car well, it has an extra set of fitted mats, which were used in order to keep the original fitted mats unmarked! Exterior is similarly very well kept, with no faults at all to report, aside from a light scratch on the windscreen caused by an old wiper. It is possible to polish such scratches out - through a specialist car detailer. There are no pin dents, nor stone chips or scratches to report. This is an immaculate car! Engine bay is similarly in excellent condition. An oil change has been recently carried out. Oil is new and golden. There is also indication that the gearbox oil was changed at 20,000km approx.We are especially pleased with the quality of this Civic Type R - It's as perfect condition as I have come across, with genuine low mileage. It's also clearly been very well kept and has had money spent on maintaining it. Cost of the carbon bonnet in Japan is approximately £750 alone. Hifi would have cost around £750 too. Seats another £1,800...!
Test driving this car, the engine pulled eagerly especially from 6,000 rpm onwards, when the V-Tec comes on. Clutch is good, with plenty of wear remaining. Feels like a standard unit. The brakes work well - with no drama from warped discs or any signs of abuse in the past. Essentially this looks as drives like a new car!
As this car was supplied direct to Ireland, it included no UK preparation, etc. The price shown above is the calculated equivalent to what it would have cost d to the UK.