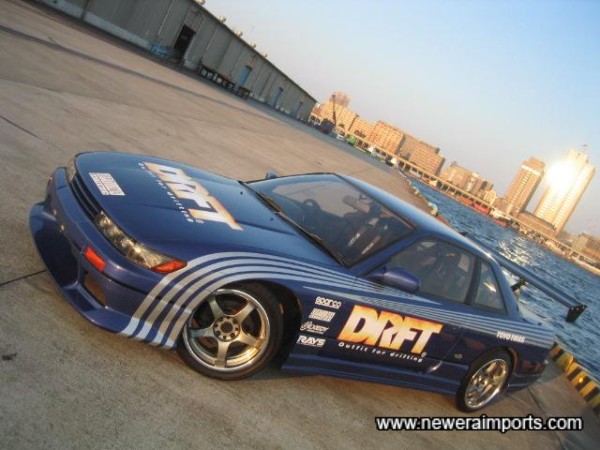 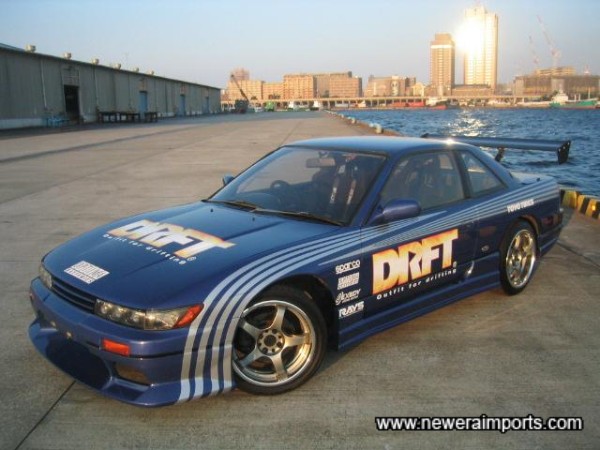 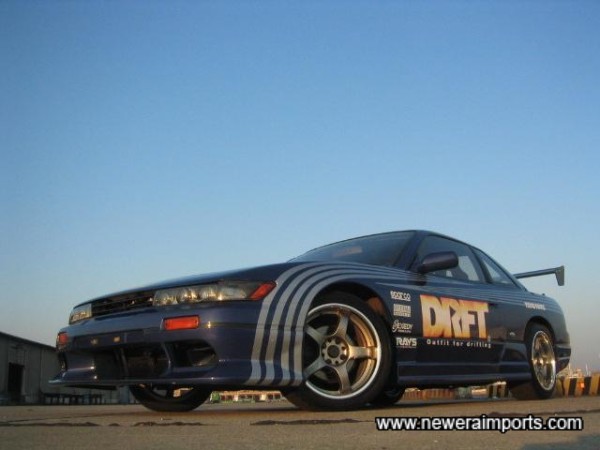 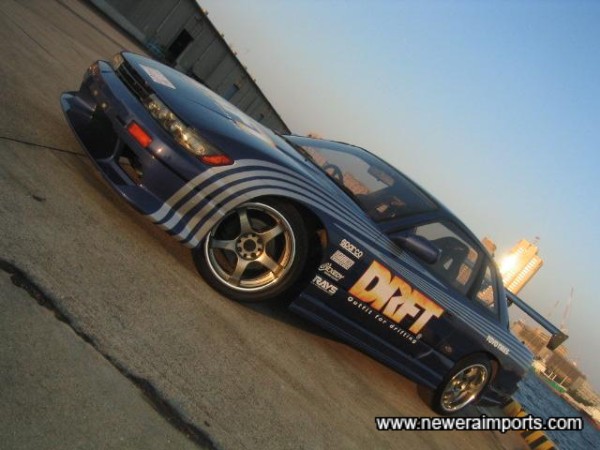 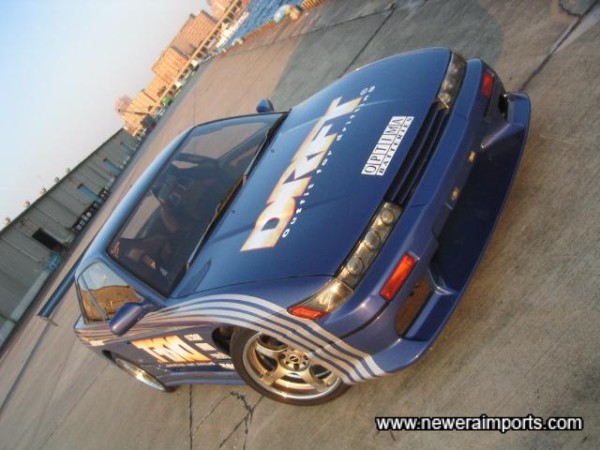 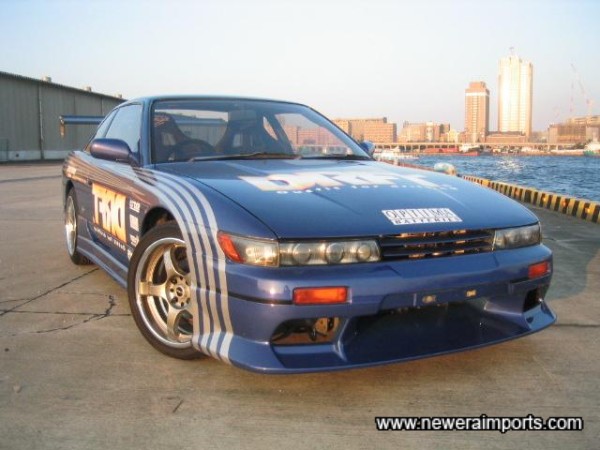 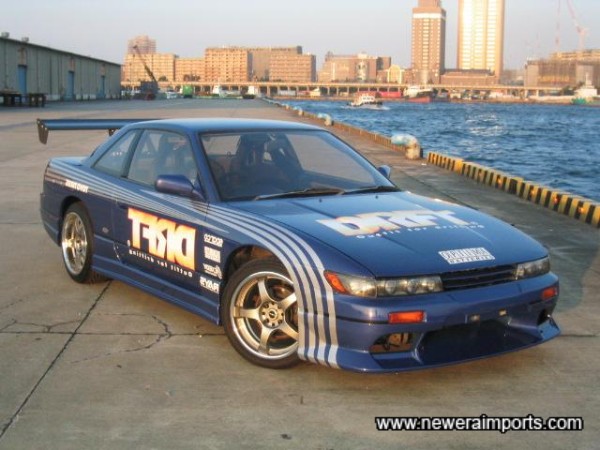 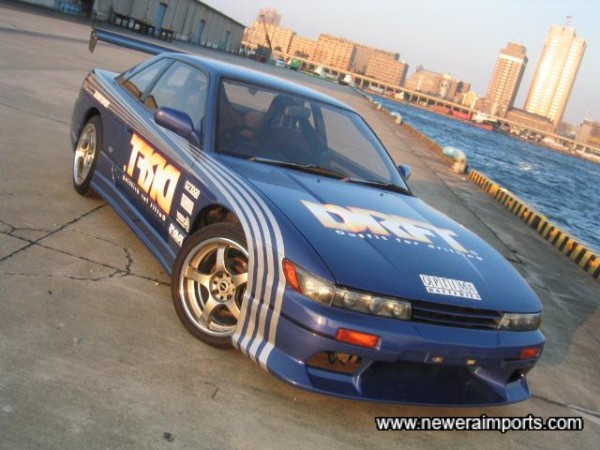 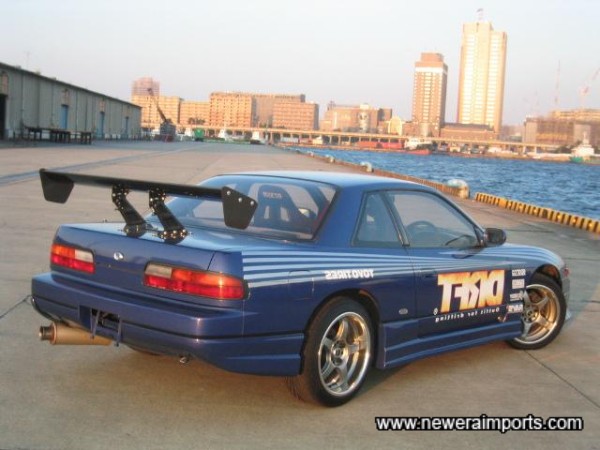 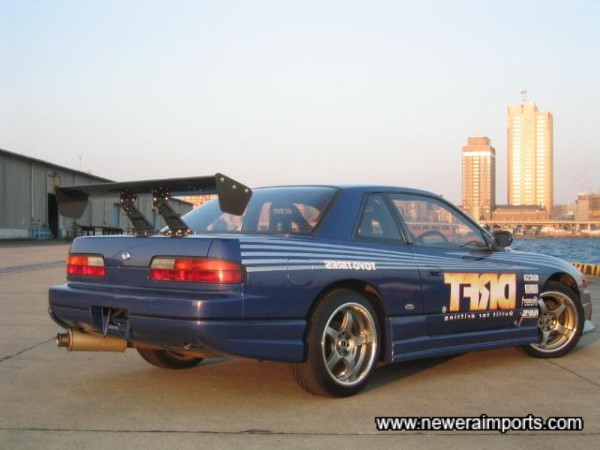 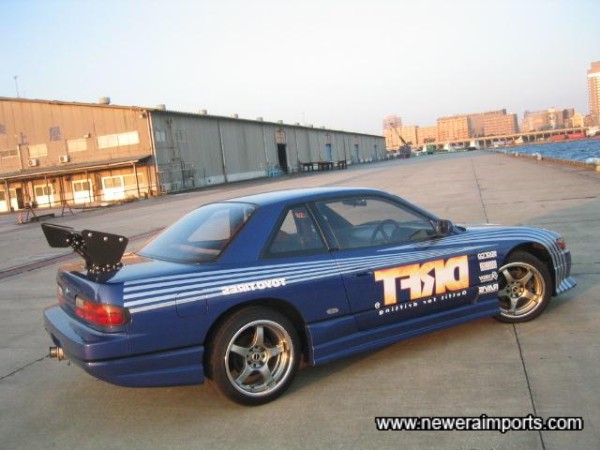 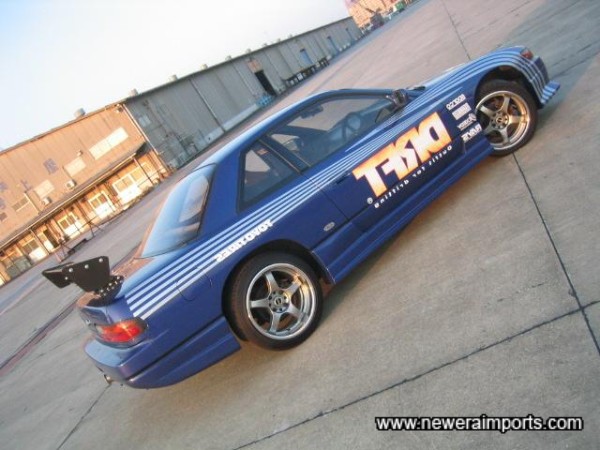 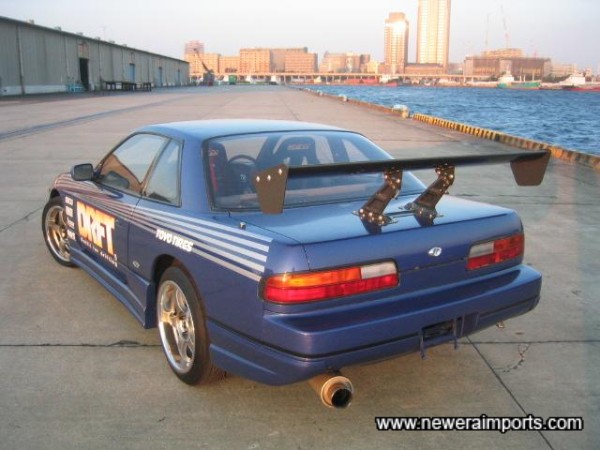 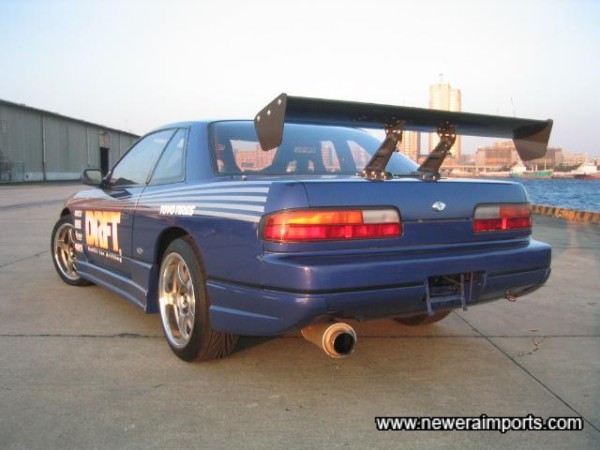 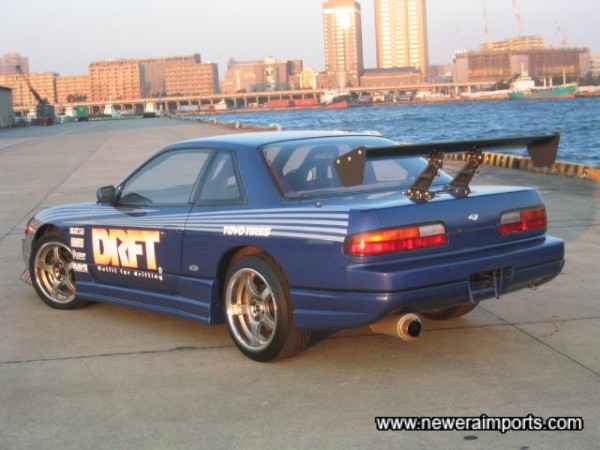 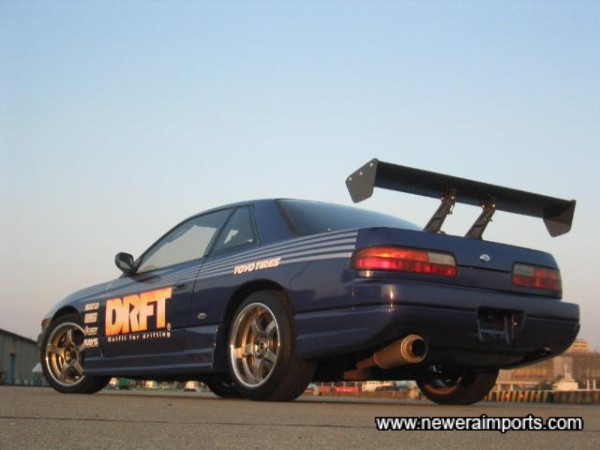 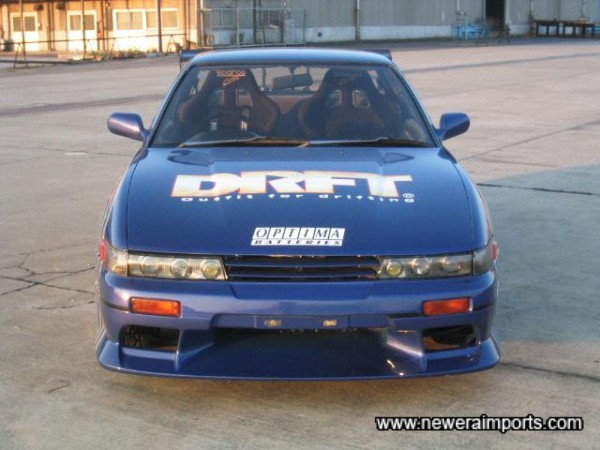 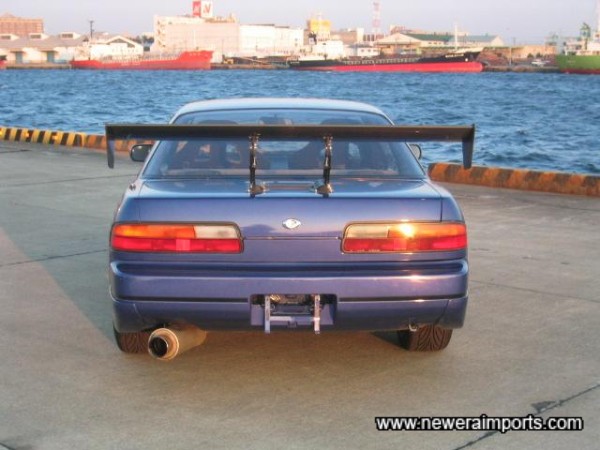 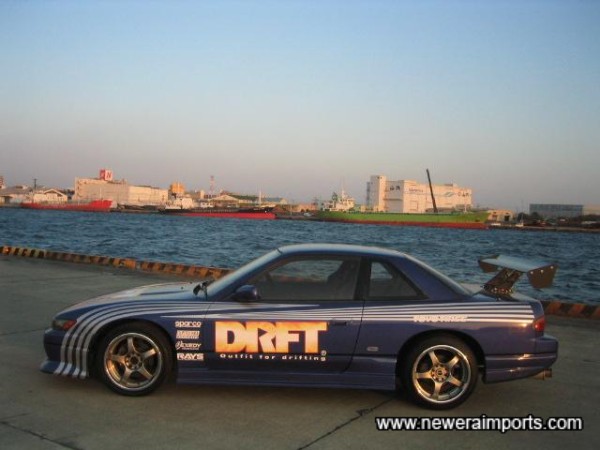 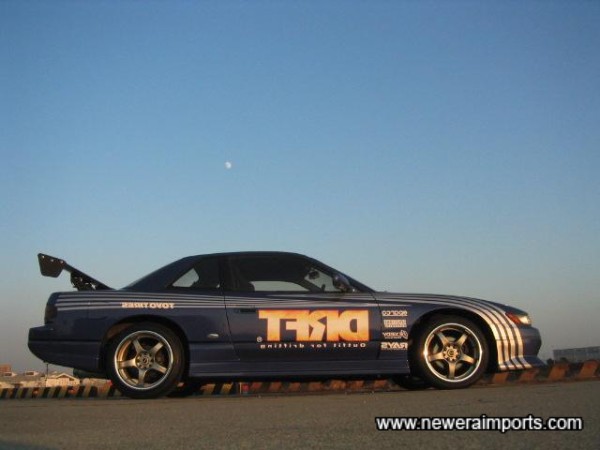 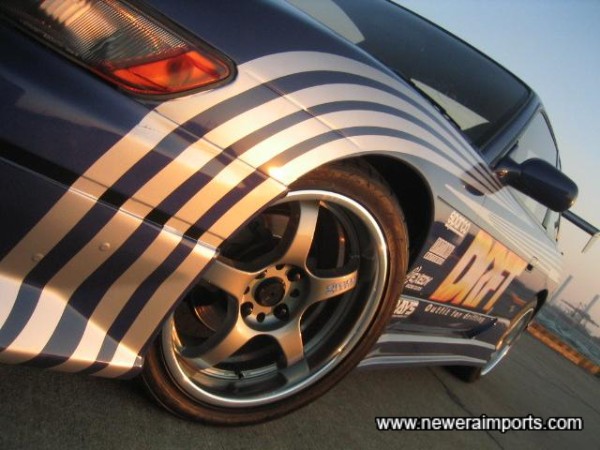 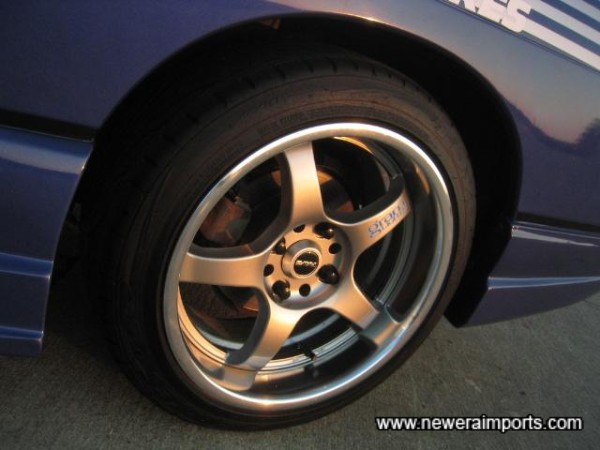 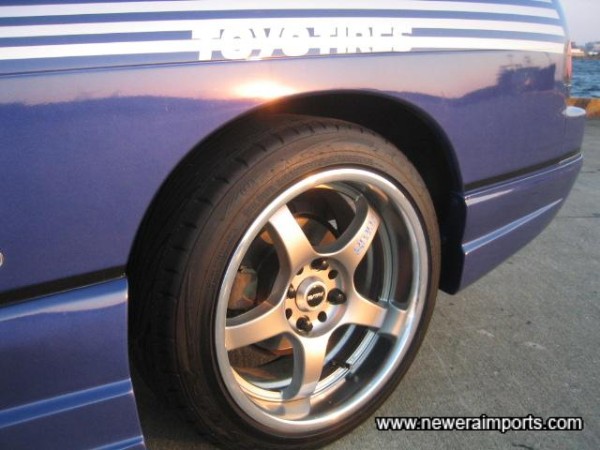 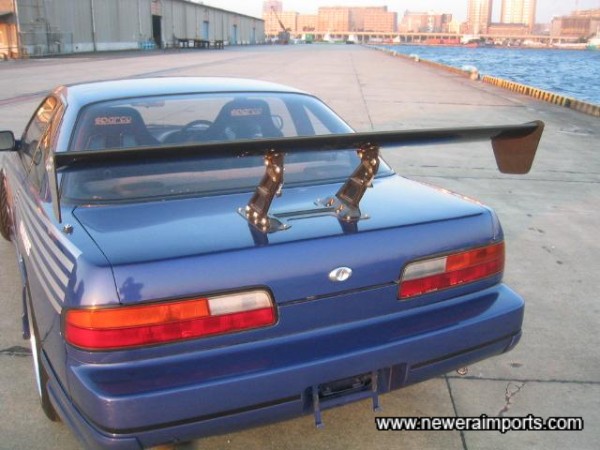 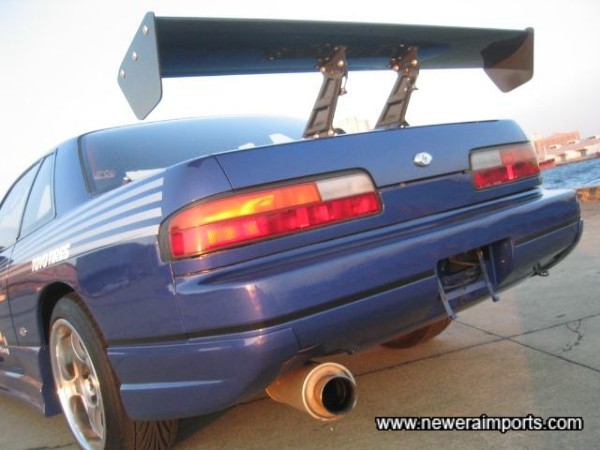 The original Silvia PS13 as sourced specifically for Tokyo Drift - Fast Furious 3 by Newera Imports. As originally featured in the back ground, as Keichi Tsuchiya's car(Cameo appearance) whilst the Evo 6 was drifting at the dockside with Tsuchiya fishing by the dockside and commenting....This Silvia K's was originally supplied as an unmodified clean example - then modified before use in the film. it received a full makeover with a C-West bodykit, complete with 17" Volk Racing Gram Lights wheels, and other mods, before being shipped by container to make it's appearances in Hollywood's Universal Studio as the actual example featured and driven in the making of Tokyo Drift - Fast Furious 3!!
Bodywork Modifications: A full original C-West DRFT bodykit is fitted, comprising of front spoiler, side skirts and rear bumper flares. DRFT is a specially made FRP compound that's very flexible, so it won't break from minor drifting collisions. Also fitted is a full C-West GT Carbon wing. The decal design was specially commissioned from C-West for the film and of course, the car was completely resprayed anc colour changed to blue metallic before these were applied.Suspension: Wheels are RAYS Gram Lights 57 Pro design, with Toyo Proxes T1R of sizes: 265/40-ZR17 rear 235/40-ZR17 front. Suspension consists of: uprated suspension springs on standard shock absorbers only.
Engine is essentially only stage 1 tuned, with an HKS PFC induction kit, and a Trust cat back rear section - meaning it's not had a hard life at all.
Interior: there's a pair of Sparco FIA approved bucket seats, complete with Sparco racing 4 point harnesses. There's also a new original Nardi classic steering wheel trimmed in suede.
Additional Cosmetic Tuning Parts can be supplied by www.neweraparts.com at low prices! For cosmetics, we'd recommend replacing the rear lights with red white Zacetec crystal items together with crystal front indicators and side markers. Also, we'd recommend fitting an FMIC and a boost controller to bring power up to around 340 bhp. For drifting use, we can also source and supply a 2 way LSD and uprated clutch, as well as coilover shock absorbers if preferred. All tuning parts are available - fitting too, if required.
This car was originally sourced as a completely standard clean example - so it's had all the above added just for use in the film - having covered less than 200 miles since. Having had a previously easy history it's in excellent mechanical condition with no previous accident damage. We've test driven and can confirm there are no mechanical faults at all to report.
Interior and exterior faults to report: The dashboard has 3 holes where something was previously mounted. This is easily repaired and would be included in UK k. The driver's seat has 2 small holes in the trim. The gear lever gaiter is worn, so we will be supplying a matching carbon leather handbrake gear shift gaiter set with this car. See pictures - which shows these already in place.There's 3 light dents on the roof - which can be removed / repaired either by a bodyshop, or a dent removal specialist. Front bumper also has some light scratches. The roof bumper can be resprayed if an OTR price is negotiated, or alternatively they can be left as they are. Note also, there's a "RAYS" emblem missing on one of the centre caps - there's also a broken key inside the door lock of the driver's door. The emblem will be replaced before shipment and the door lock repaired as part of full k.
OTR Price: £6,680. Includes all costs such as full UK conversions, paintwork described, minor seat burn repair, 12 month's comprehensive warranty, valeting, cost of road tax and new MOT. This Silvia K's Turbo will be prepared by ourselves in our workshop based just outside of Brighton, where our UK office is based.
Alternatively we can supply at £5,800 less UK preparation. To complete UK register as a car over 10 years old all that's required is an MOT and basic UK conversions (Foglight), plus road tax and first UK registration fees. Comprehensive 12 month warranty is available as an option, at £250.00. This option is ideal for someone with a bit of time and basic mechanical / electrical skills, wanting to save on costs of UK preparation. This car is also available for supply to Ireland, Europe and other countries at FOB price only (Please inquire). Currently stored in Yokohama, Japan - this car is ready to ship, worldwide. Please Contact us for further information regarding this Silvia PS13 or to source an alternative top condition quality Silvia.
Newera Imports - Source of all the original Tokyo Drift - Fast Furious cars. Now exclusively available to customers worldwide, only through www.neweraimports.com!