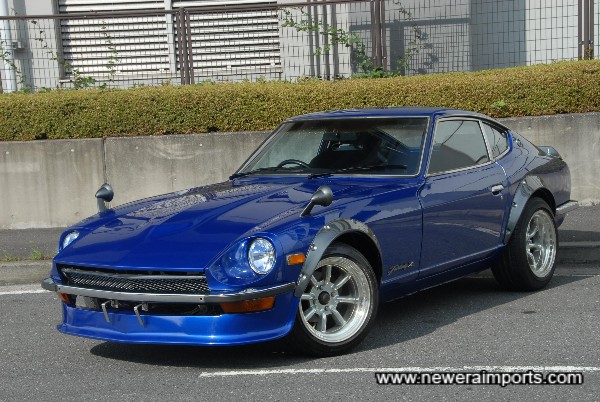 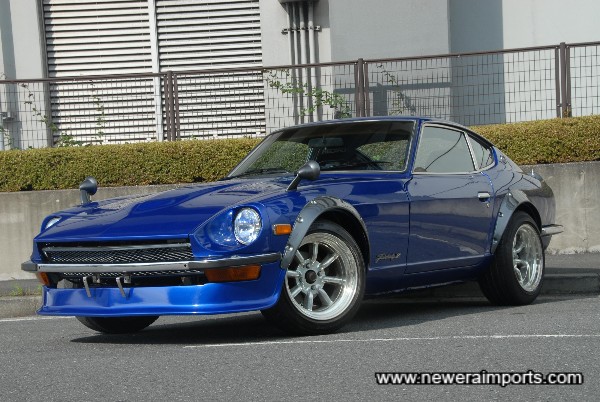 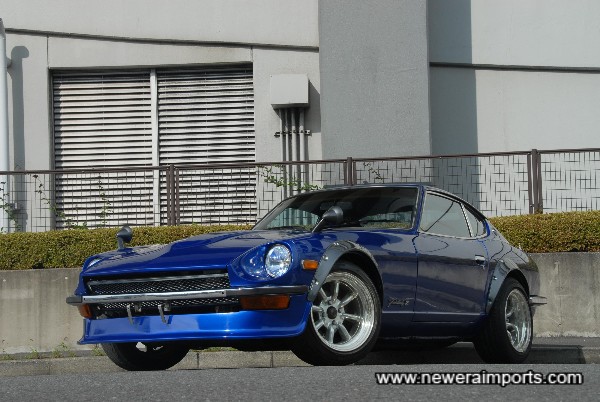 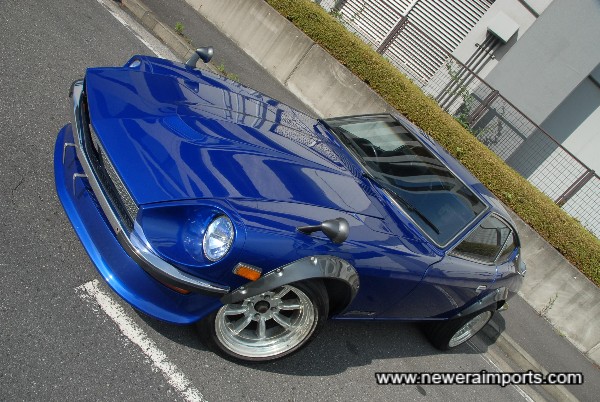 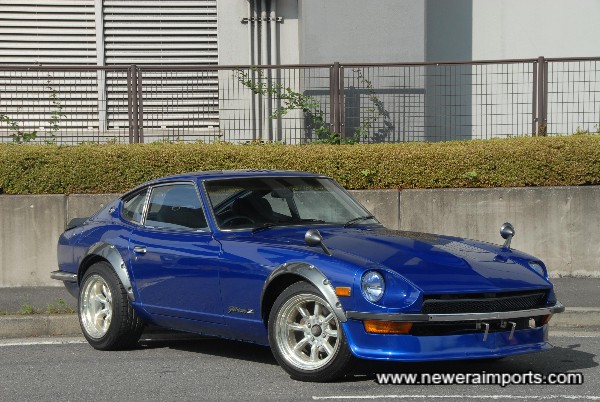 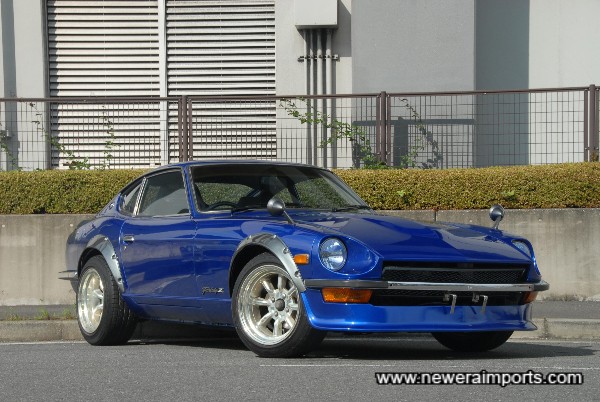 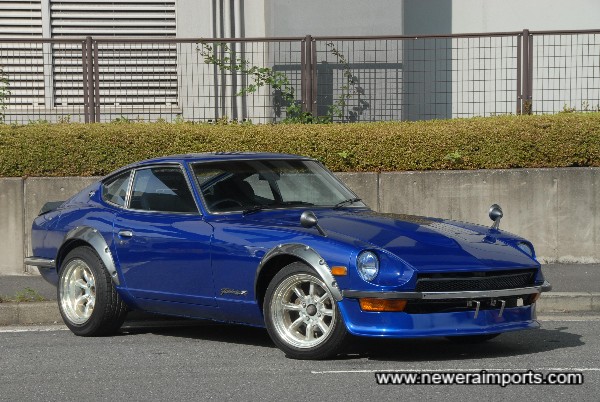 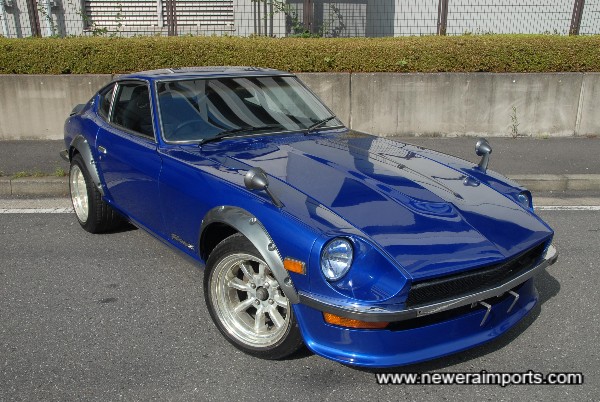 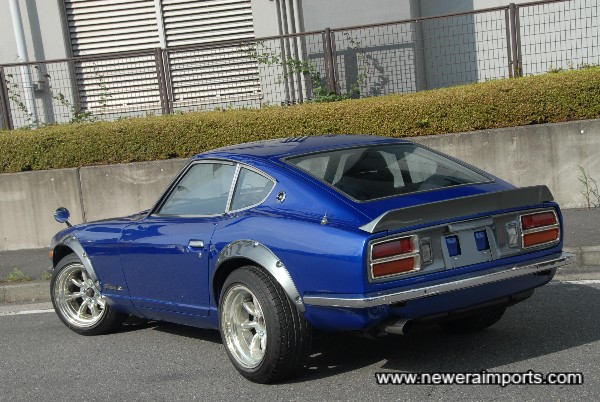 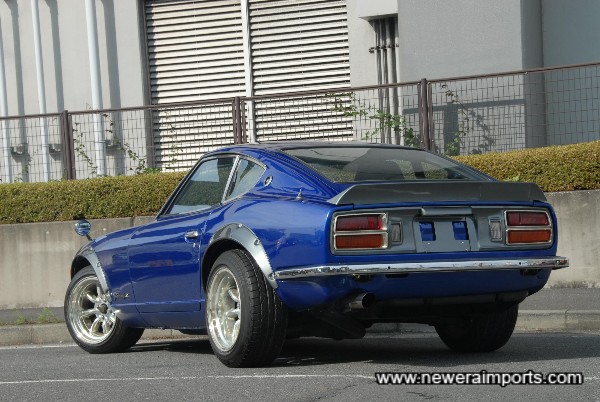 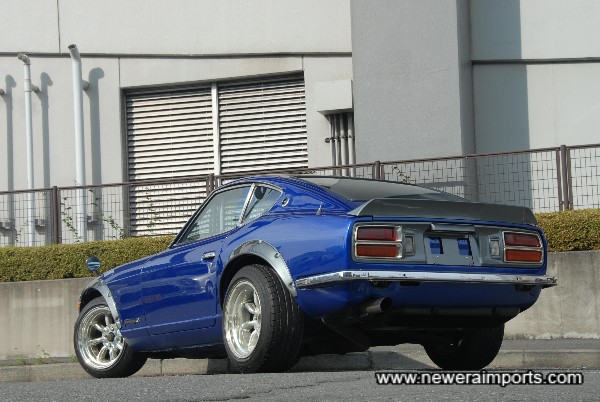 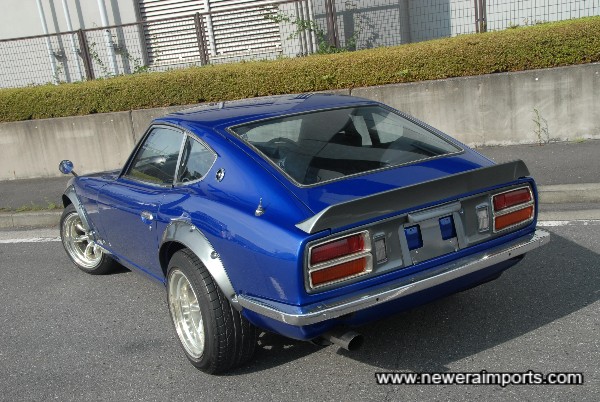 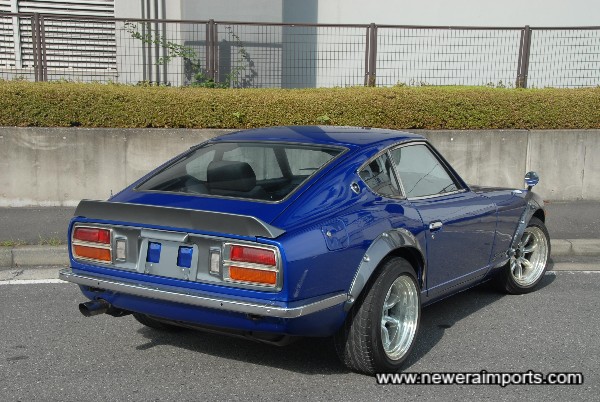 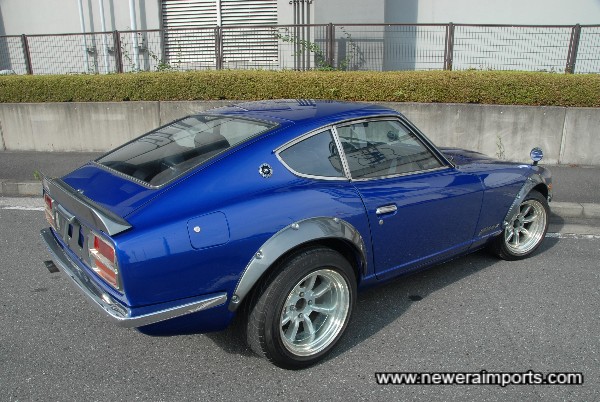 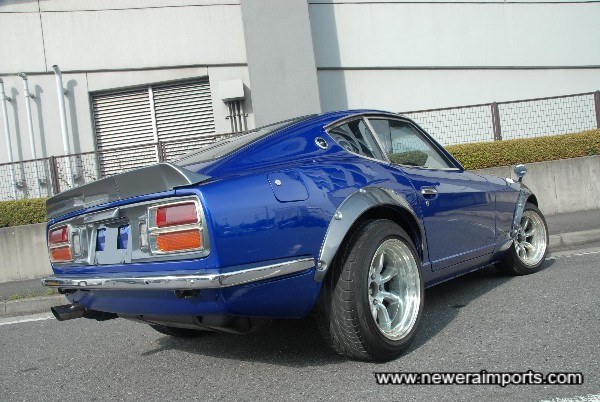 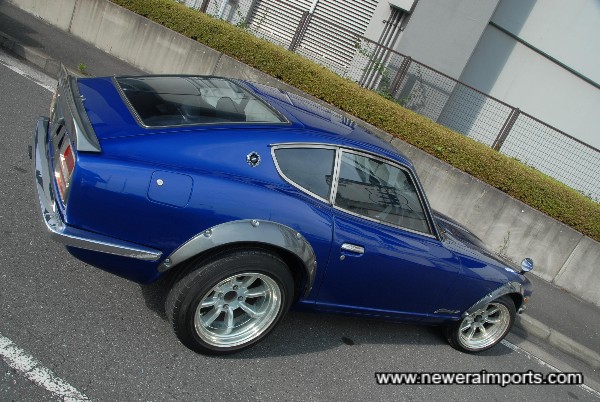 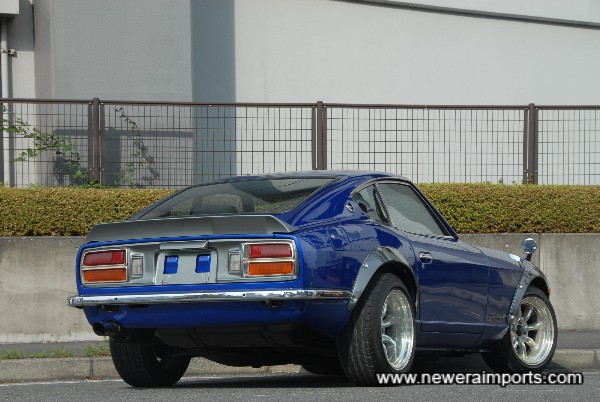 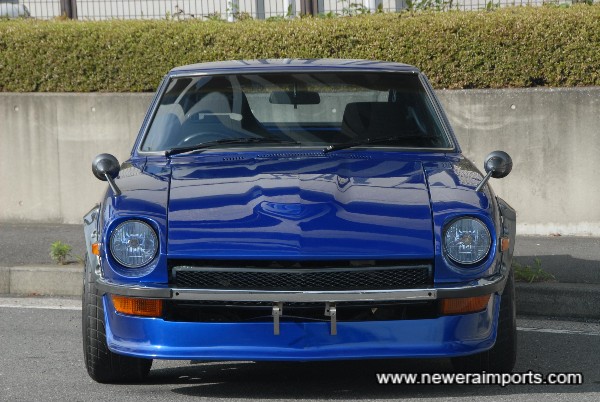 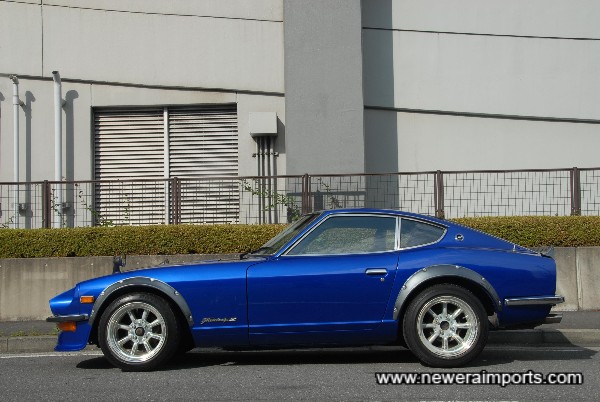 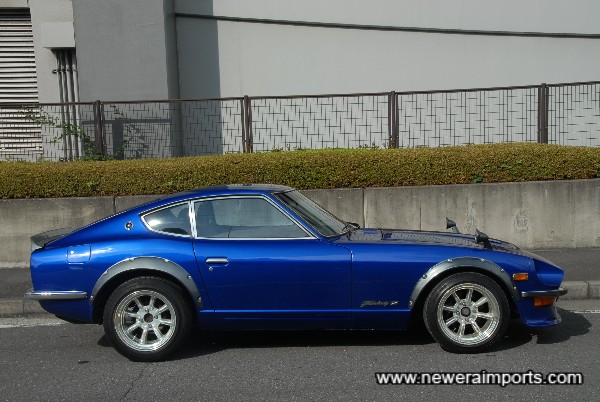 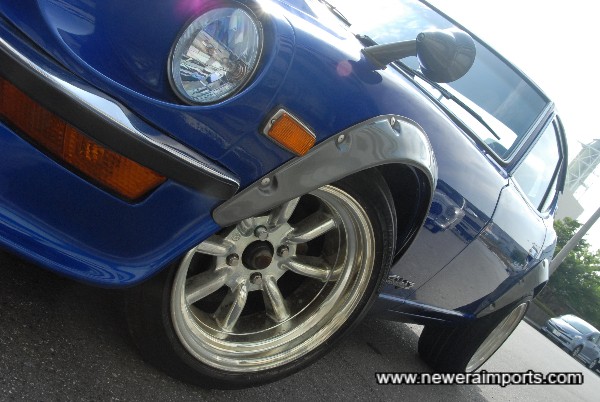 This SWB classic 1970's Datsun Fairlady Z is one of the best we've come across in years! Currently on hold pending payment from a customer this car took over 3 months of diligent searching and rejection of various examples that weren't up to our standards of excellence.

A Brief History: The Japanese home-market S30-series Z range - at launch in October 1969 - consisted of sub 2-litre engined models in order to stay within a particular taxation class. Four models were marketed: The S30-S 'Fairlady Z' S30 'Fairlady Z-L' ( both with L20A SOHC six cylinder engine ), and the PS30 'Fairlady Z432' and PS30-SB 'Fairlady Z432-R ( both with the S20 DOHC six ). But from October 1971, three L24-engined models were added to the domestic range: The HS30-S 'Fairlady 240Z', HS30 'Fairlady 240Z-L' and HS30-H 'Fairlady 240ZG' Group 4 homologation model. These models were carried through to late 1973, when the Japanese 'Oil Shock' (following the 'Yom Kippur' war) hit hard.Datsun also sold some RS30 'Fairlady 260Z' models ( with L26 SOHC engines ) in Japan in late 1973, but these were soon recalled due to problems meeting emissions standards, and fitted with L20 engines - with their body number prefixes altered and engine-bay identity plates changed to suit. G-prefixed 'Fairlady Z 2/2' four-seater models were sold in Japan: from early 1974 right through to the end of S30/S31-series production in late 1978, alongside the two-seater models. This example is an S30 which is clearly the SWB shape, same as the famed 240Z model. Built in 1978 it was originally supplied with an L20 engine, although it now sports a tuned 3 litre modified L28 engine, with a 5 speed box and other tuning.

Modifications: The original engine for this car had been a 2 litre 6 with a 4 speed box. It’s since had an L28 engine fitted, which has been bored out to 3 litres. Notice the Mikuni carbs are virtually brand new too. It’s also got a 6 branch exhaust manifold (Heat wrapped) and sports exhaust (With removable tail silencer). Note the Ultra ignition leads and the alloy plate (To deflect dust from beneath the engine) and shorter throttle bells to enhance torque at lower rpm. Engine sounds fantastic from idle all the way to the 6,000 rpm red line (No limited fitted). The suspension is uprated with coil over conversions at each corner, setup is similar as AE86 converted suspension strut tubes, etc. Specification described at time of purchase by ourselves states this car may have a limited slip differential. Wheels are RS Watanabes with Potenza RE-01 sports tyres of size 205/50R16. Inside, there’s a Recaro driver’s seat together with a Bride passenger seat.Restoration: Mileage is unwarranted, although documentation proves that in 2003 the odometer reading was 94,000 original kms. The car's since been restored odo now reads 260km – this is possibly the mileage since it was restored extensively. Car was originally a burgundy colour (See pic of the chassis no) but it’s now blue metallic with grey arches. Note the original arches haven’t been cut out but sit beneath the flares which means bodywork could easily be restored back to original if ever desired. Paintwork quality is excellent with no rust, door shuts, underside, etc. painted. Even the front and rear screens were removed when stripping this example down for bodywork. Considering this is a 30 year old car panel gaps and panel integrity are excellent. The complete lack of rust on the body is also extremely rare!

Recommendations: We believe this car could benefit from some additional modifications. The steering wheel’s quite large (Helps, as there’s no PAS). It could also use some new seats. Possibly period race style buckets in black leather with studs in them. Alternatively some modern bride reclinable seats, with Bride logos would look amazing. A new tailored carpet set is available at around £350.00 + PP. The wheels have some sort of coating on them which has corroded in places. It would benefit from having the wheels stripped and refurbished, possibly with the centres painted in grey to match the arches. We may also be able to find some clear front indicators, which would help modernise the front together with the Raybig headlights already fitted… There is a significant restoration tuning market for these old cars still alive welll in Japan. www.neweraparts.com can source the parts needed to improve these fantastic cars!Test drive: With no choke fitted, start up can begin with a lumpy idle. Engine has a deep induction roar with good pickup from low revs. Moving off the clutch is progressive and easy to use. Ride is comfortable over bumpy surfaces too. The engine builds revs strongly - sounding not unlike a small block American Vee engine. Gearbox is pleasant to use, steering not at all heavy either. Despite the car's age, brakes are decent and pull this Z up without any dramas. The car does feel older than the typical cars we drive - but it's alive with information of feedback, feels light and nimble and able to take regular use - if the new owner so desires. We suspect this car will have people's necks swivelling in envy though - looks amazing from any angle. Classic elegance with Retro muscle. You gotta love it!!
Were this car going to the UK (Our customer is based in Ireland, so this will be the only Japanese Market Imported 1970's Z there, we expect!) we would have retailed this car at:.
Fancy a genuinely top quality hand picked classic Japanese Z (Or other model)? We'd relish the challenge of finding a similar high quality rare car! Please Contact us for further information of how we can source an example well beyond what's typically available for sale in UK, Europe, etc.
Newera Imports - Consistently the source of only the best hand picked performance cars from Japan.