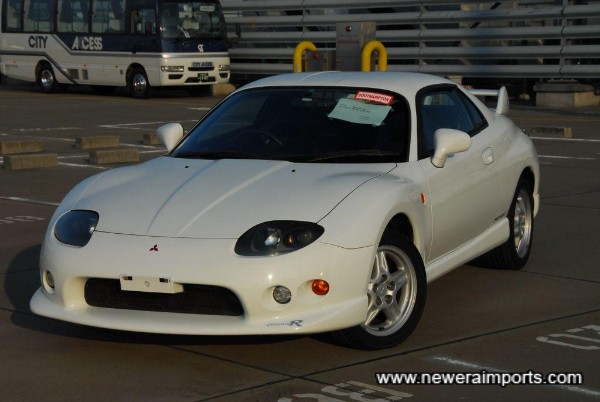 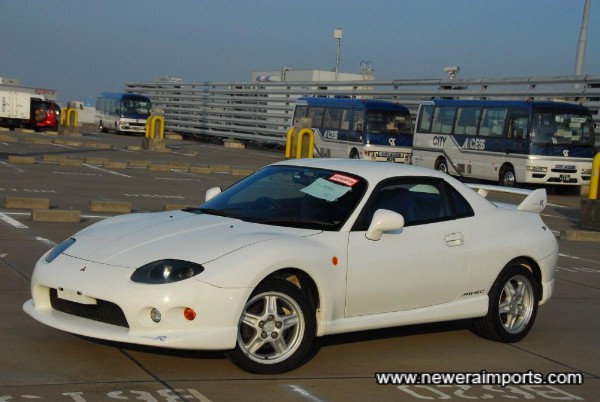 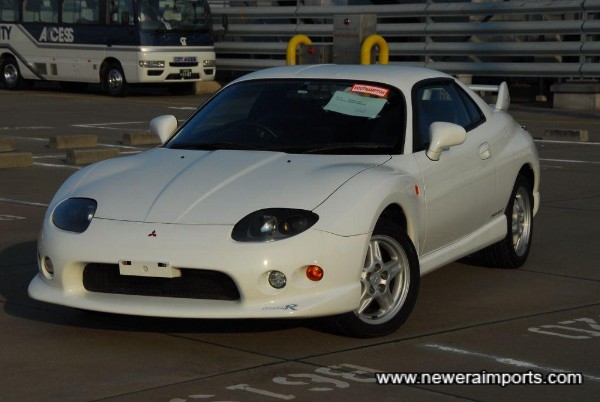 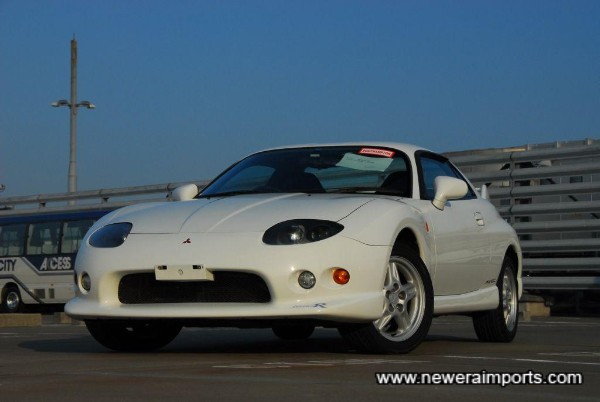 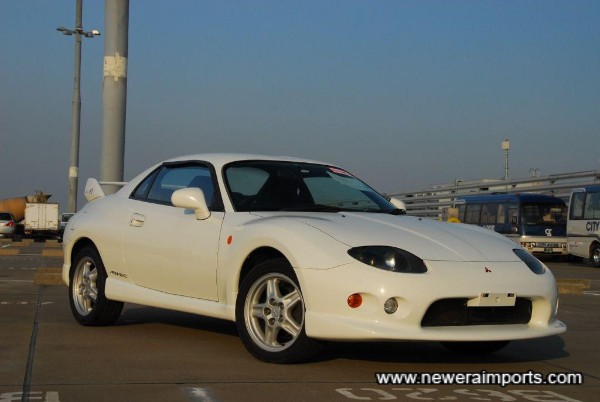 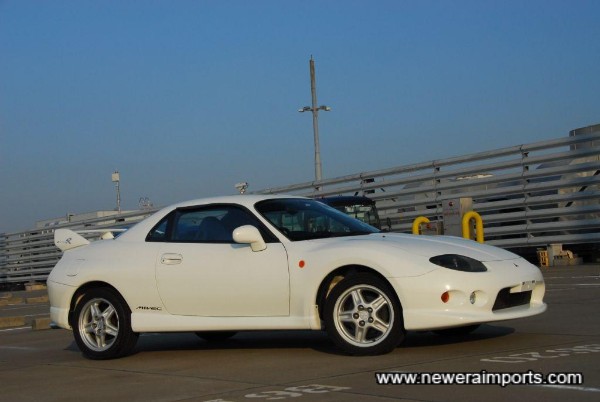 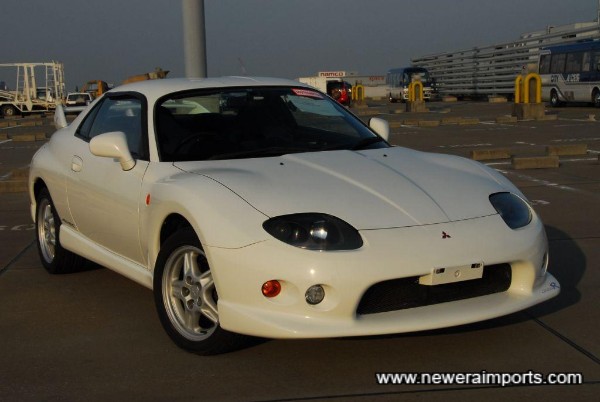 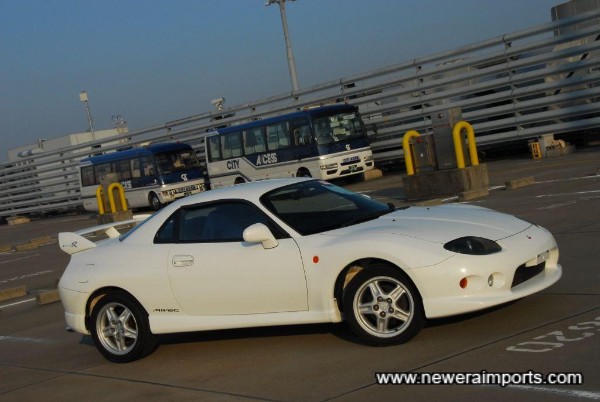 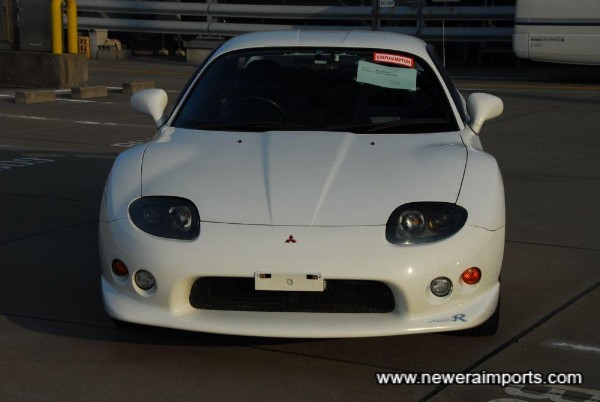 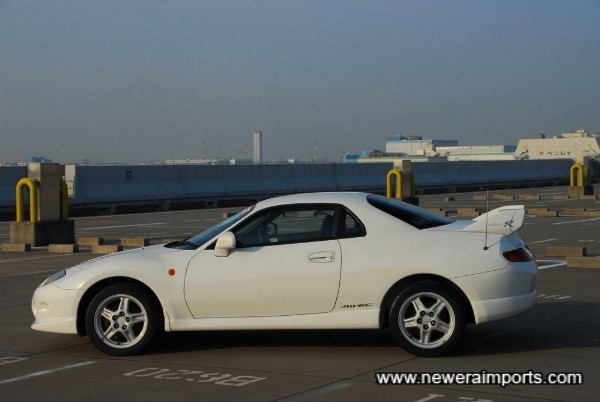 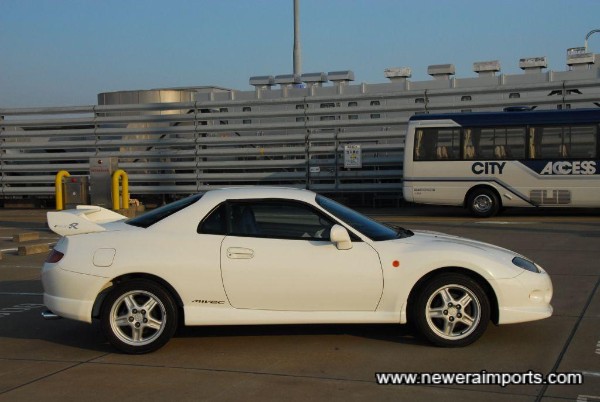 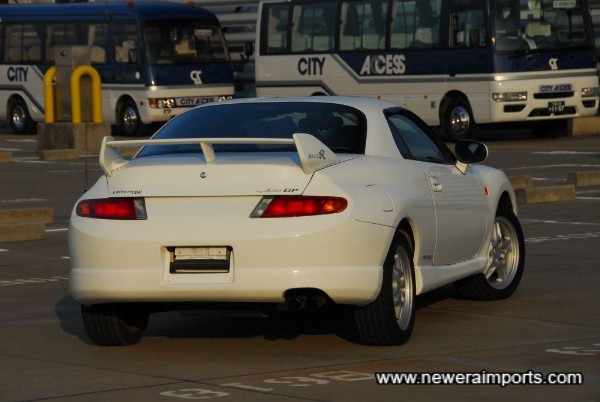 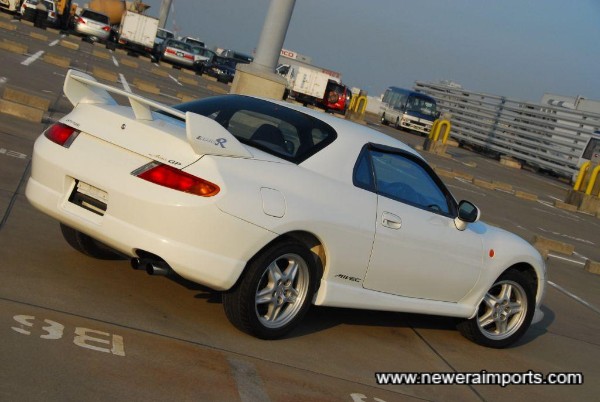 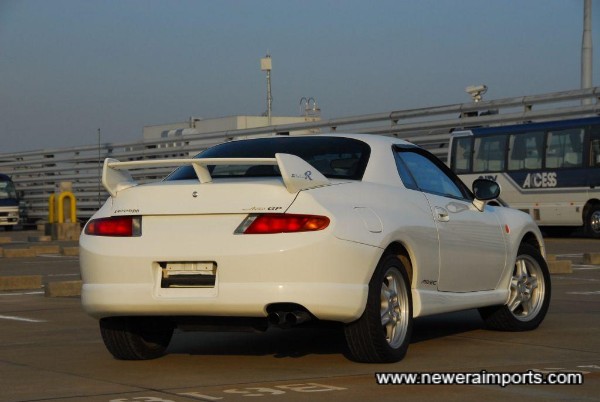 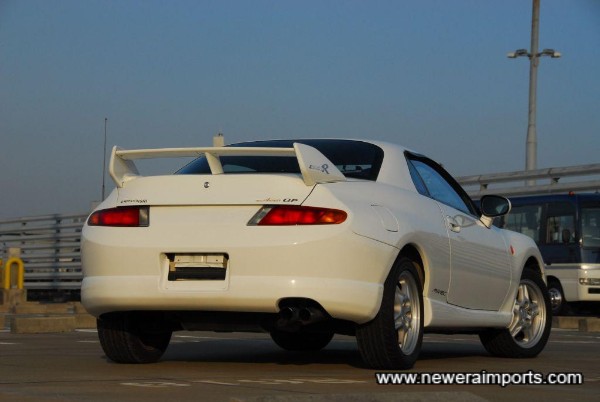 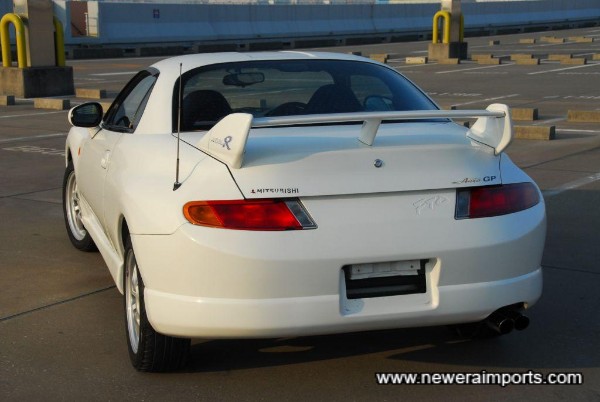 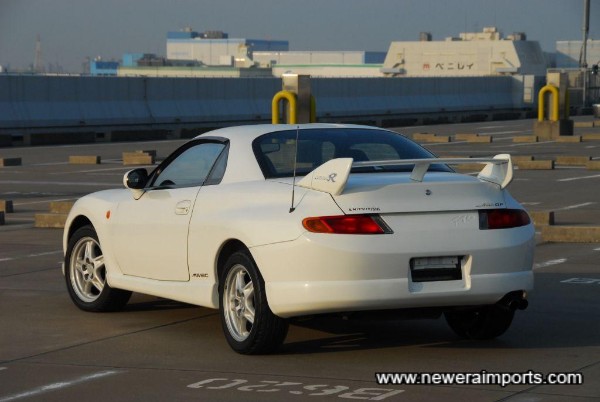 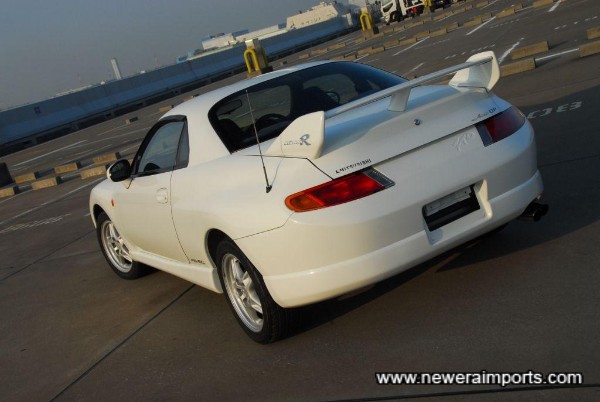 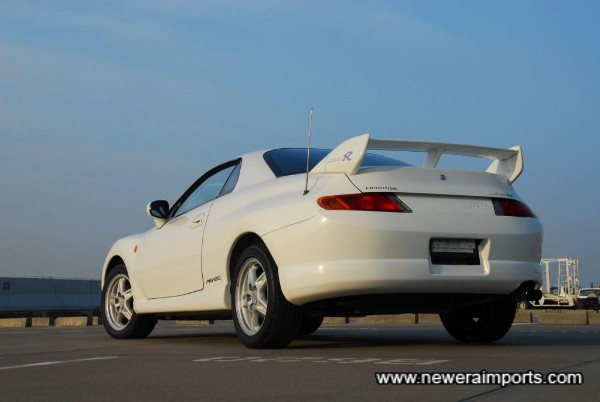 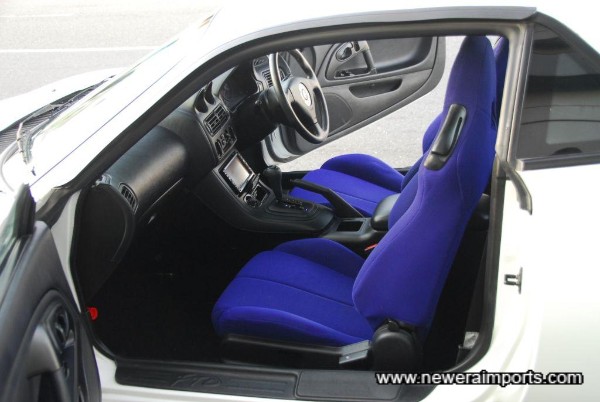 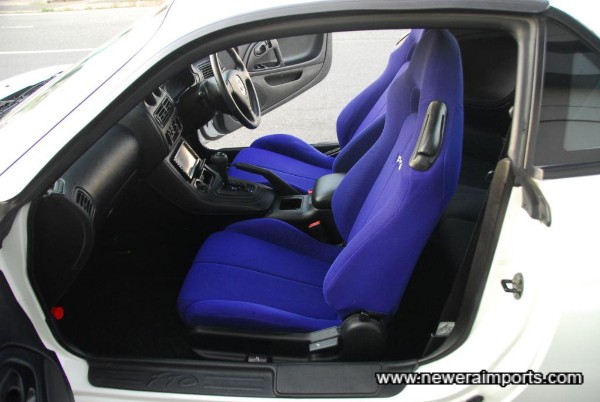 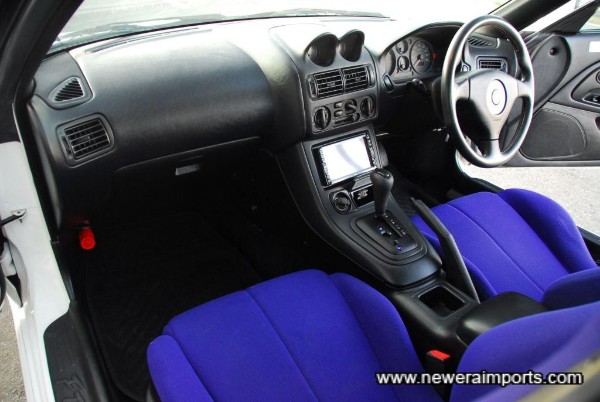 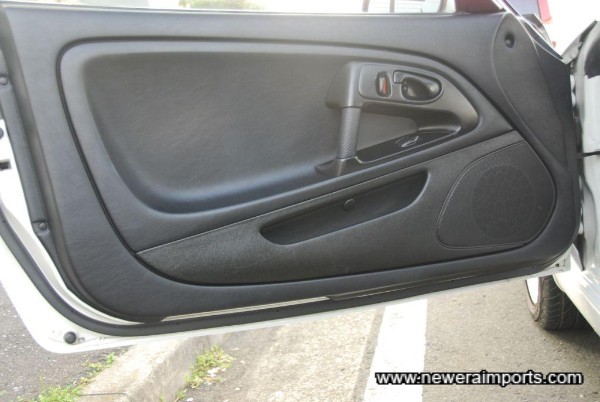 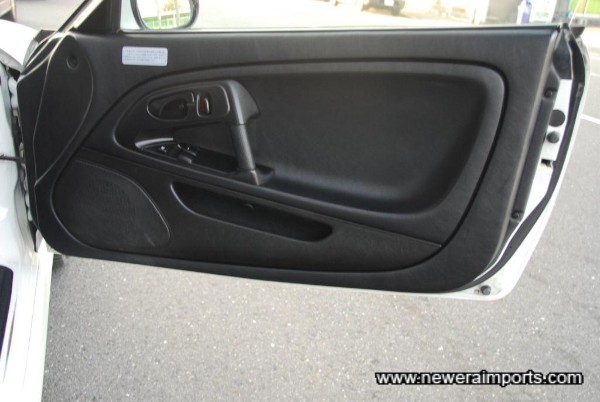 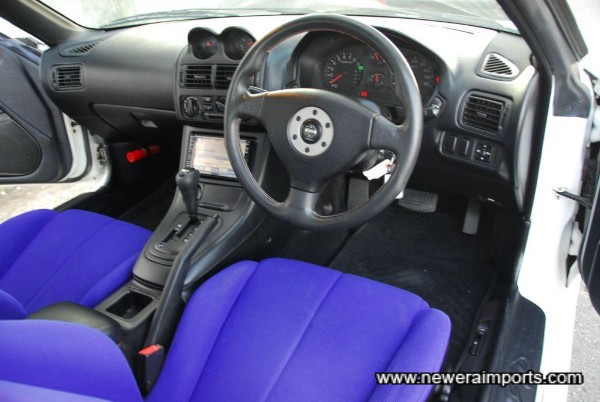 This is a very rare Version R FTO, in pristine condition, well above the typical quality you'll find in the UK. If you've been looking for an outstanding example of an FTO, you'll find this hard to beat for quality and price!
The FTO is a unique car, with only 13,690 MIVEC examples made between 1994-2000. Official Mitsubishi figures show that only 350 GP Version R's were produced as facelift 1997 models (- Only 30 Version R's were produced in 1998 before production of this model stopped. Information - official figures obtained from Mitsubishi Japan).
FTO Japan market History: In 1995 the FTO won the prestigious Japanese Car of the Year award - the first time a sports car had done this since Toyota's MR2 ten years earlier in 1984. Despite being front wheel drive, the FTO handles very well, with excellent balance and poise. It's been compared to the DC2 Integra Type R, which is considered by many to be the no. 1 best handling FWD ever made, although the FTO is more refined and arguably prettier too! The Mivec engine is a 24 valve V6 with variable valve timing. There's good low down torque available, or the unmistakable howl this car makes at higher revs (Especially with a good uprated exhaust and induction kit!)Facelift models are of better spec. than pre 1997 models. However, due to there being no model report available for MIVEC models, from 2004 April till now, it's not been possible to import these to the UK. This example, being 10 years old in July of this year, is only the 3rd facelift example we have sourced in over 3 years - and far better than most of the other FTO's we see. These are sad tired examples which we wouldn't consider importing to UK!
Features: The Version R Aero Series - Facelift model is the rarest most sought after of all FTO models, for good reasons! This is the lightweight model which Mitsubishi built with reduced sound deadening, a lightweight air conditioning system, Limited slip differential, Rallyart strut brace, HID headlights, Signature high backed sports seats (In red or blue, depending on exterior colour), Momo 3 spoke SRS steering wheel, a unique rear spoiler and Version R detail emblems, including one for the front bumper on the passenger side. The Aero series carried original option factory skirts - same as on GPX models. View http://www.versionr.com/ for more details! Equipment also includes: Original Rallyart front rear strut tower bars, Factory tinted glass, power windows, power steering, remote controlled door mirrors, central locking, rear screen integrated radio aerial, adjustable wipers, tilt adjustable steering column and facelift front bumper. Note also this example has the optional marker lights integrated in the bumper. Inside, there's also optional Mitsubishi centrally mounted oil temp and vacuum gauges. This car also has original option rubber wind deflectors.Test Drive: We drove this car thoroughly and found it drives beautifully - as it should for a low mileage example. It's got a very eager engine which pulls hard in the MIVEC zone, right up to the redline, with a satisfying rasp. The factory fitted LSD provides excellent traction, whilst the suspension allows you to really throw the car into corners with confidence! Gearbox is sweet – working perfectly of course, and brakes are excellent too. This drives like a new car. Note in the boot there's a car cover, yet another sign of the great care this car's had lavished on it. Inside, there's a TV Navigation system (Supplied Free with the car – however, please note TV will not work in UK. May be possible to connect a DVD player to it however).
Auction grade is 4 (Auction sheet is available upon request). Usually, most FTO's are in poor condition, nowadays - this is the most exceptional example we've come across for a long time! Being a non-smoker's car, there are no burn marks to report and as it's very low mileage, the seats aren't worn much either - although there is some wear to the cloth of the driver's seat from entry exit over the years. Prior to photographing, we carefully washed and inspected the bodywork. As pictures show, this car's immaculate - There's just a couple of very small pin dents, one on the rear driver side quarter and one on the passenger quarter (Hard to photograph as it's white), but in any case, we'll be putting these two minor faults right as part of full UK preparation. There are a couple of small chips on the rear bumper which have been touched in. Also a small scratch on the passenger side door mirror. These are faults too small to warrant the extra cost of repainting. We noticed there's a crack on the o/s/r lenz. We have already sourced a replacement to go onto this car. At the same time this is being done we'll also be replacing the "Version R" spoiler stickers and the rear "Mitsubishi" sticker as these are damaged from age. Also, the driver's wind deflector will require some new double sided tape - as it's come unstuck on one section. An easy repair. Just small attention to details - so when this car goes out, it'll look much like new.
This FTO GP Version R has recently been bought for our stock and is currently in Japan, ready for shipping on the first available vessel to UK. Available at £6,195 ew MOT, fully valetted, in perfect condition, complete with 6 month's road tax and full UK registration. A comprehensive 12 month UK warranty is included also.
Newera Imports - Total dedication to perfection in every car we supply. Consistently recommended by tuners, Owner's Club Members and the UK's top magazines for supplying the best hand-picked performance cars from Japan.