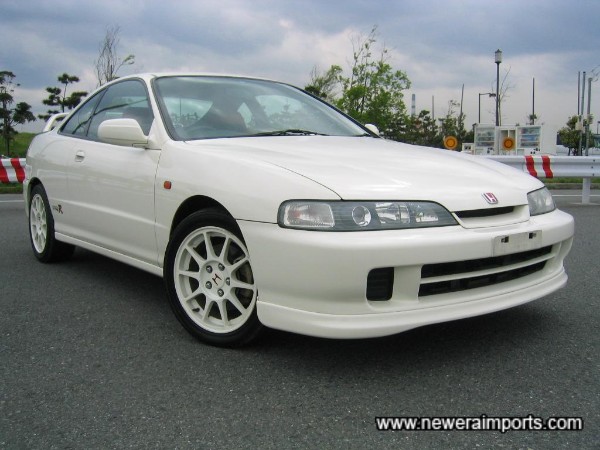 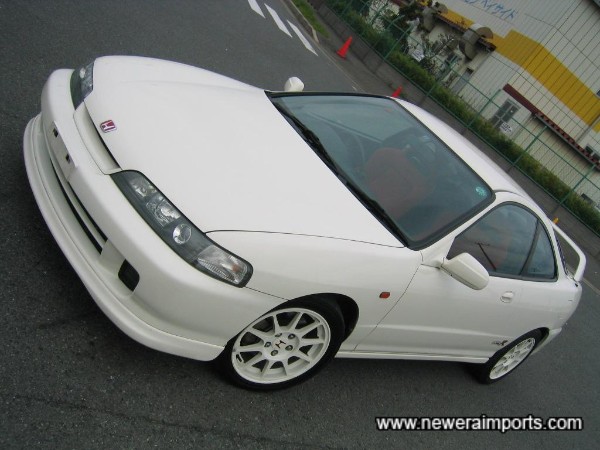 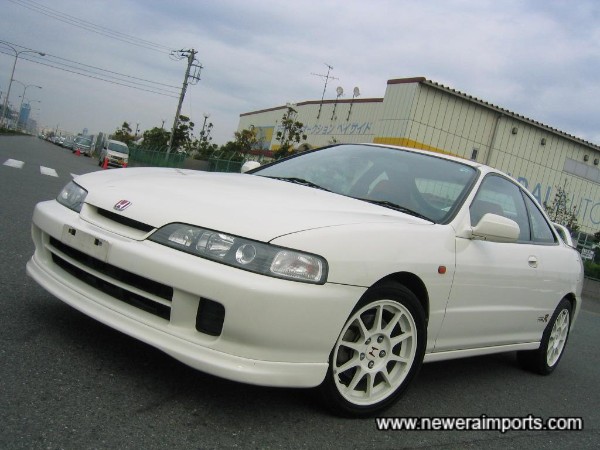 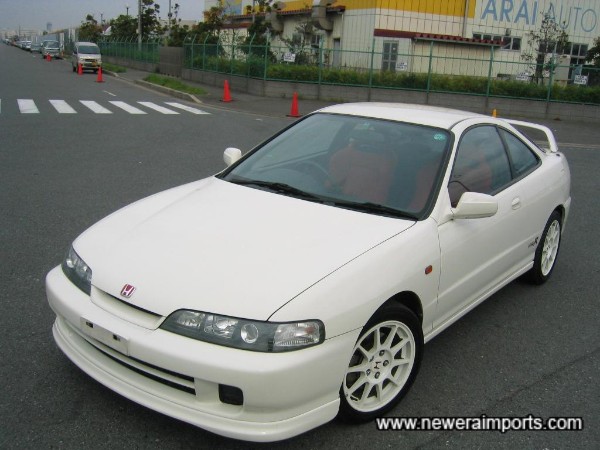 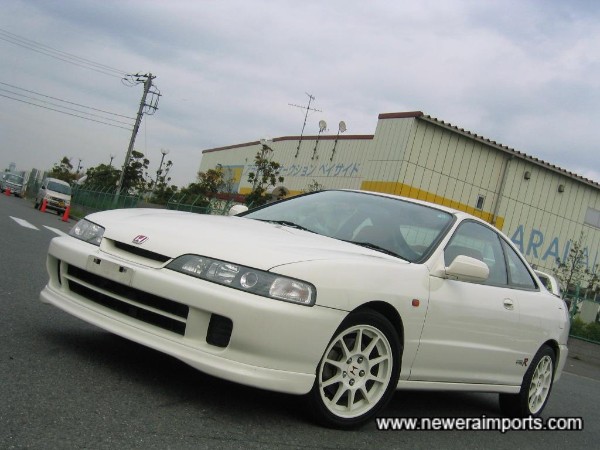 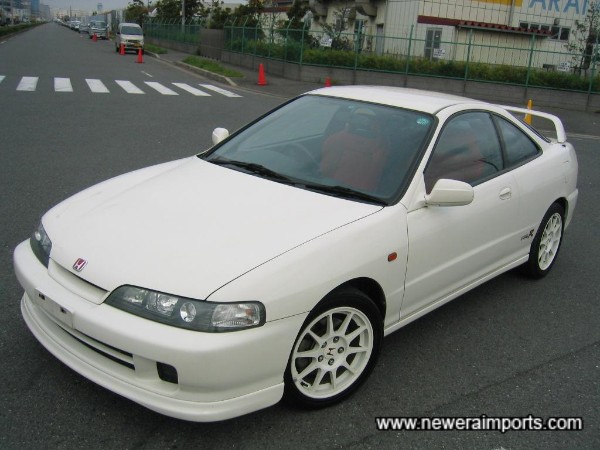 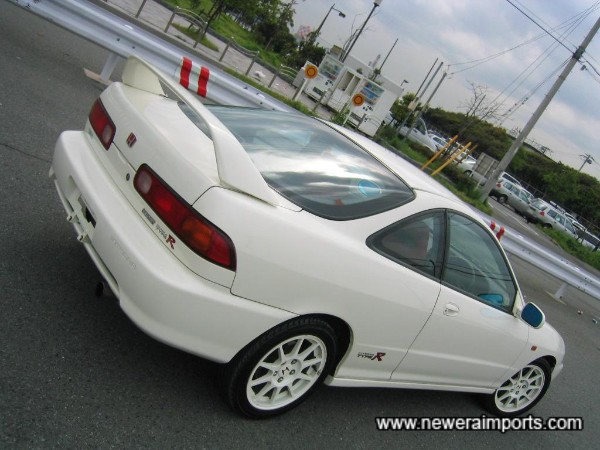 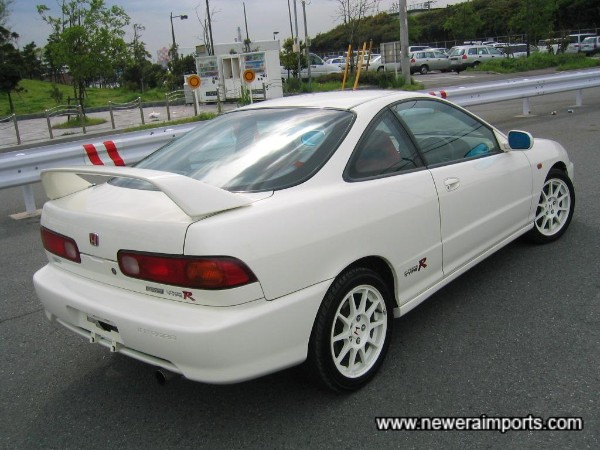 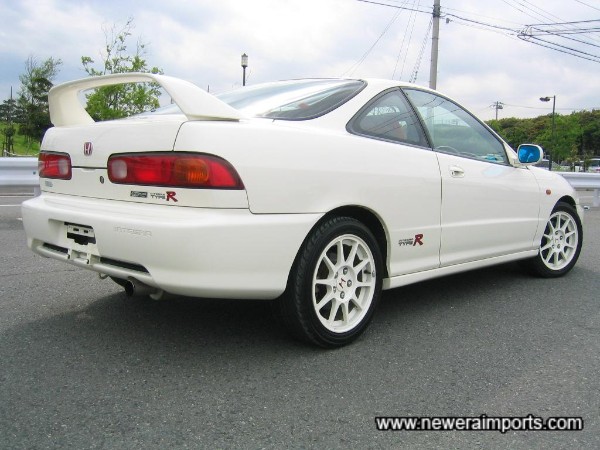 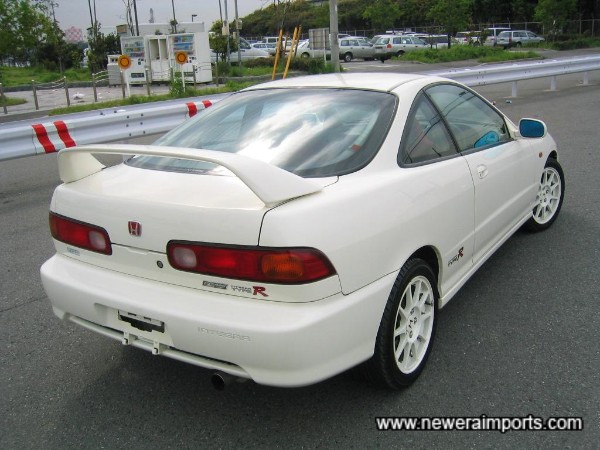 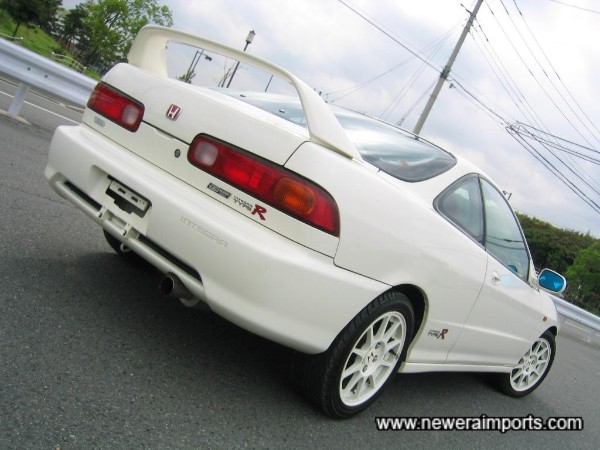 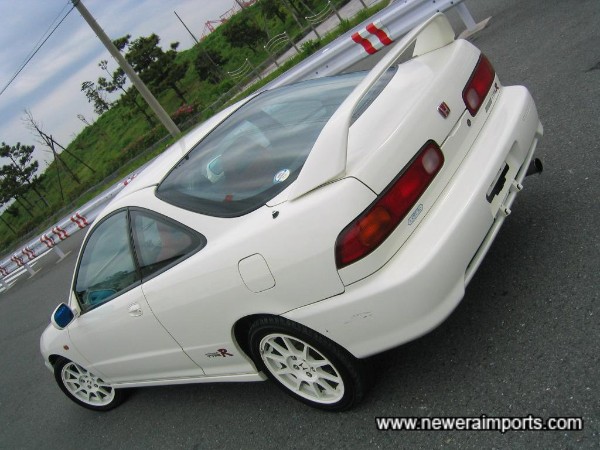 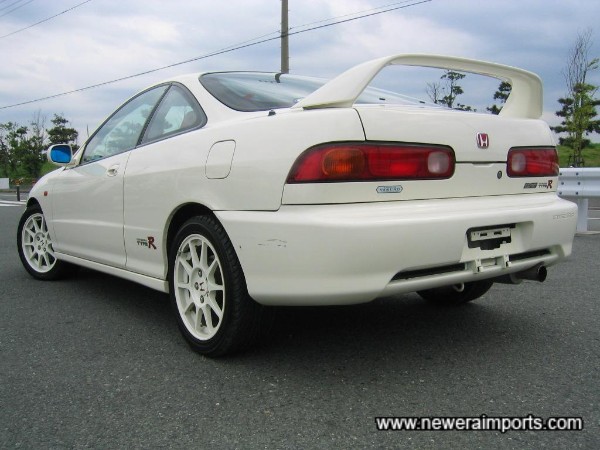 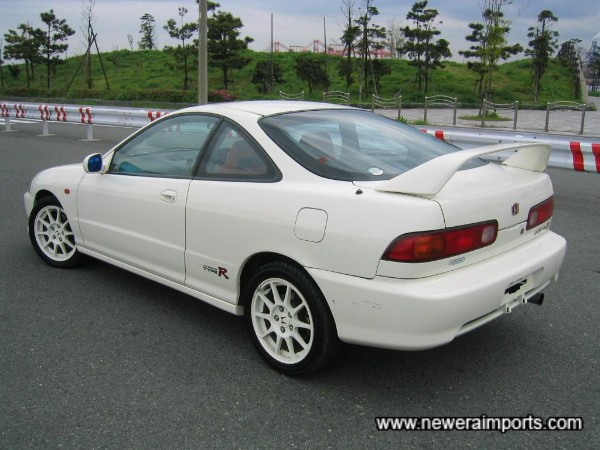 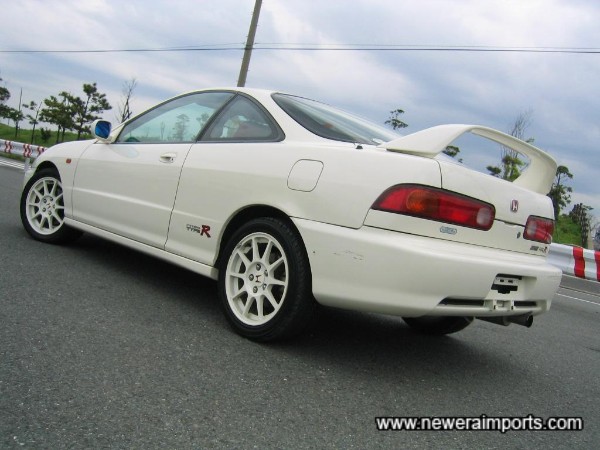 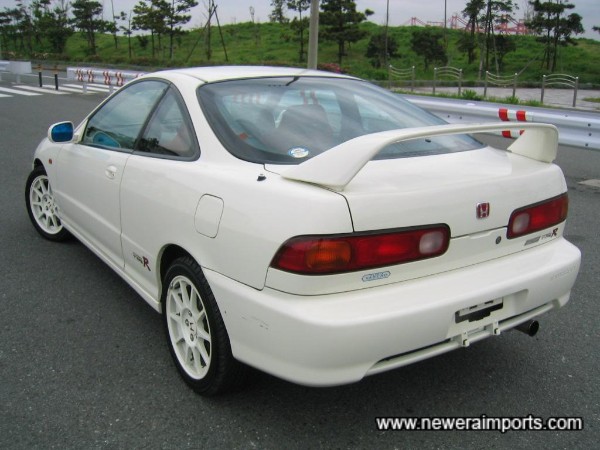 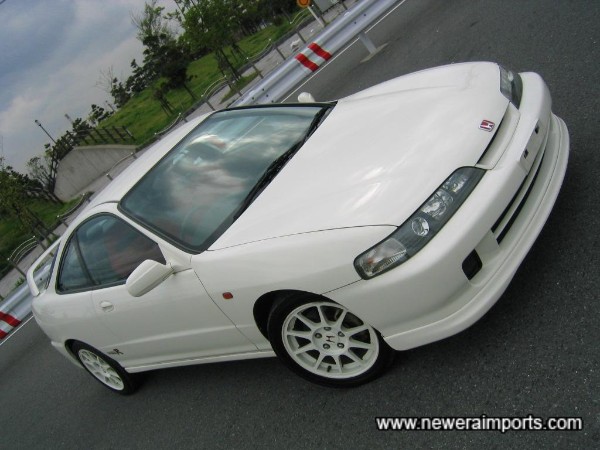 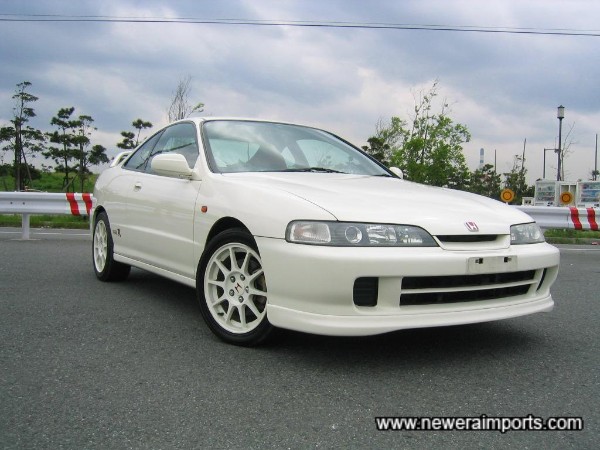 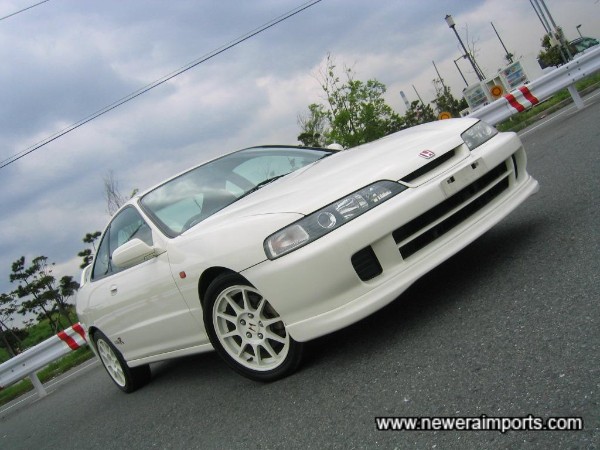 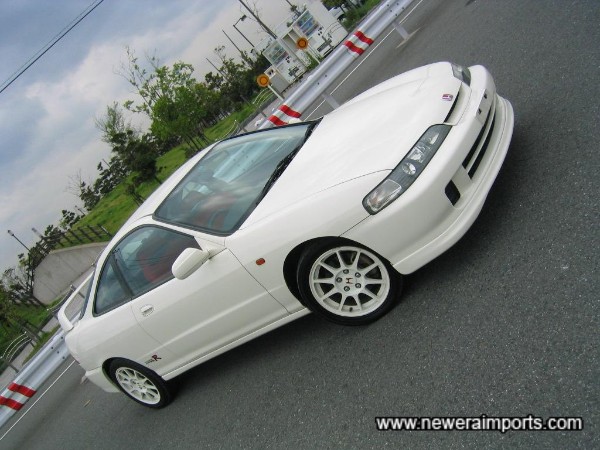 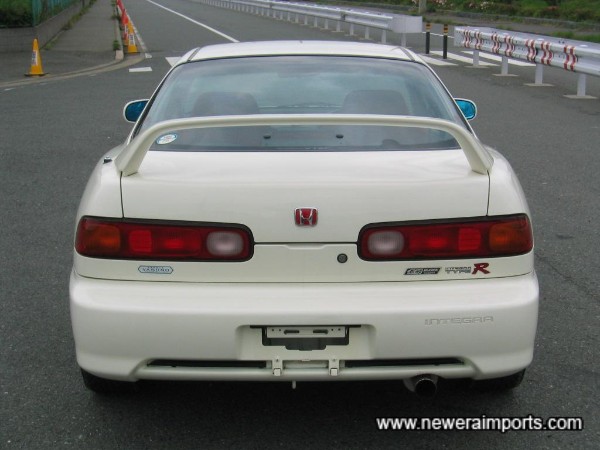 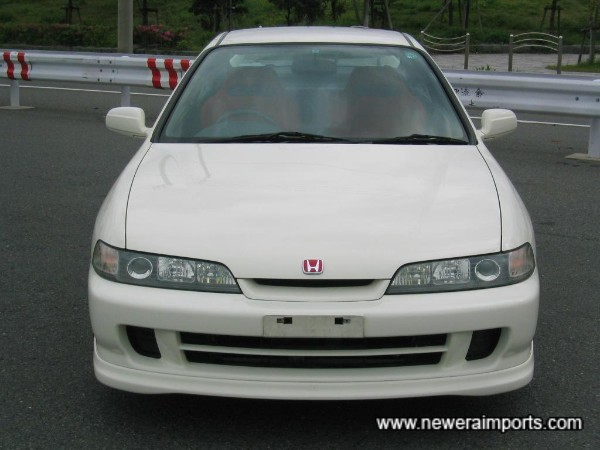 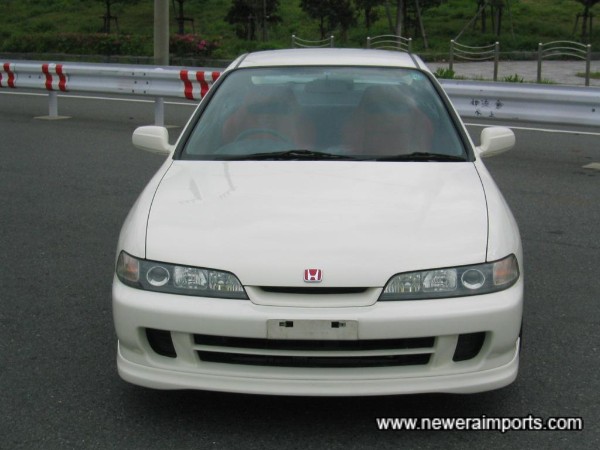 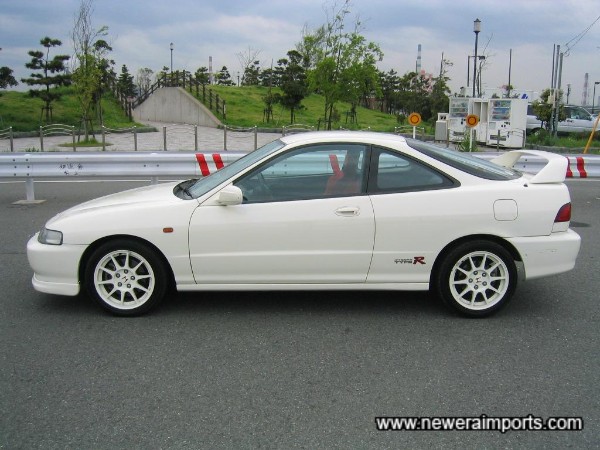 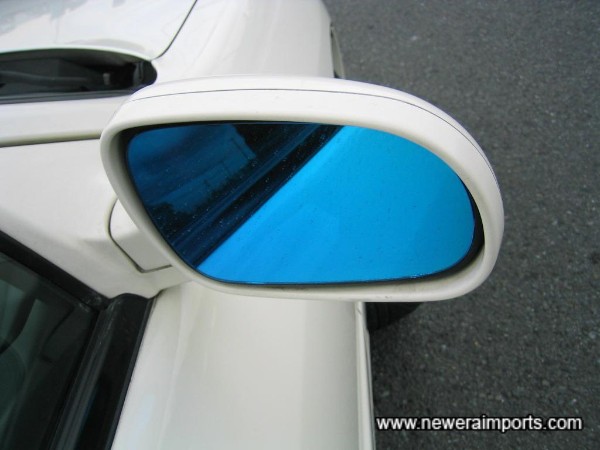 This is a 98 Spec Type X as stamped on a plaque located on the centre console and inside the passenger door shut. Type X denotes the red interior trim on a white car. It’s a 1999 model of July registration. It’s of 1998 + Spec. and so in addition to a quicker steering rack and suspension differences only fitted to JDM models, also carries the following factory modifications introduced in 1998:
To provide an increase in power to 200 bhp and also higher torque at low and mid rpm levels the exhaust manifold was re-designed. Suspension and brakes were improved to maximize driving performance and handling. Furthermore, the Integra type R 98 Spec adopted15-inch front disk brakes 14-inch rear disk brakes. Suspension was retuned, An SRS airbag-compatible steering wheel was designed by MOMO and High intensity Discharge (HID) headlights with over twice the brightness of halogen lamps were introduced. A fresh design of 5-hole 16-inch alloy wheel was employed, with corresponding tyre size increase to 215/45ZR16. Front and rear bumpers were also re-designed to help modernise the look further. Glass was also changed from being of brown tint, to a light blue tint instead. As standard, the engine is making 200 bhp at 7,600 rpm with a V-Tec Zone that sounds goes much like that of a racing engine from 5,800 - 8,500 rpm, it's not hard to see why this car won so many admirers in Japan and the world over, although it was never sold in this guise anywhere else than Japan.
98+ Spec Factory fitted equipment includes: 4 channel Anti Lock brakes, Limited slip differential, Dual SRS airbags with Momo designed leather steering wheel, Climate control air conditioning, PAS, electric windows, original "Type R" fitted mats, blue tinted glass with privacy rear glass, front wind deflectors, remote controlled door mirrors, full alcantara Red Recaro seats, HID headlights with front fog lights integrated into the light clusters, front, rear and underside braces, alloy Type R gear knob and pedals, 16" alloys, large diameter discs.
Uprated Items: The door mirrors have been replaced with items with blue tinted glass. The Speedometer was upgraded to a Mugen Speedo at 9,563km, complete with 260 km/h readout and alloy surround, also by Mugen. As the Speedo now reads 66,983km, the true mileage is a total of both these figures, as given in this car's details. This will be converted to read total distance in miles and speedo will in mph.This example carries an uprated Blitz Sonic Power Air Cleaner, in place of the original. The exhaust manifold is uprated and looks to be of a 4-1 design, but may be a 4-2-1 design (As it's covered by the original heat shields, without a hydraulic lift it's difficult to tell when being inspected at our yard). There's a complete uprated exhaust system too. In the engine bay there are also Splitfire uprated ignition leads and a neatly fitted set of earthing cables, to enhance spark plug performance.Note that oil has been recently changed also. All signs show this has been a well cared for car that's been regularly serviced. Tyres are half worn Yokohama DNA GP.
Interior is in excellent condition. This appears to have been a non smoker's car since new. There are no faults to report aside from very minor wear to the seat bolsters from age, although the material itself is .almost unmarked It would appear the last owner of this car was a small Japanese person. We found just 2 tiny burn marks, too small to repair (Around 1-2mm diameter each!) on the driver's seat. Note that the hifi has been removed by the previous owner. No fitting plates are included with the car, but if required, please let us know and we can order these inexpensively. Alternatively they'll be the same as those fitted to UK Integra Type R's.
The auction grade of this example is 4b This example is in excellent condition. Checking the bodywork carefully during after washing it we noticed the following: There's a 2cm scratch on the bottom of the driver's door. Also some large scratches on the rear bumper n/s corner and minor scrartches to the edge of each door mirror. On the bonnet, rear quarter, and boot lid there are some tiny stone chips. The bumper will be resprayed, the rest of the small stone chips and scratches carefully painted by a professional specialist. Also noticed one small pin dent on each of the doors. Each of these panels will be repaired by a dent removal specialist. Note there are some light scratches on the wheel rims, but nothing of particular concern - some of these have already also been touched in by the last owner.

We test drove this DC2 for around 4km after warming it up. There are no mechanical faults to report with performance. Clutch is fine, with no warping from the brakes. Performance feels strong especially in the V-Tec zone – It’s certainly not lacking in go! With the uprated induction system it's louder and more responsive than standard but sounds race car like when pushed hard! Performance is strong from the 200 bhp this car gives as standard, so with these extras, it's making around 10-15 bhp more than Std.

Incl. Full UK Conversions and de-restriction, minor paintwork defects repaired as described above, MOT and road tax, the car is £9765.