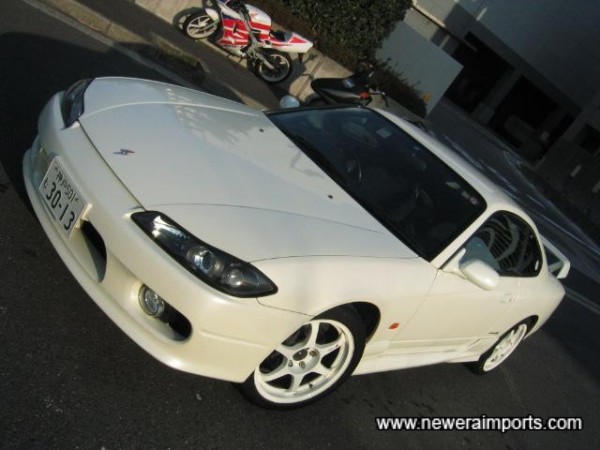 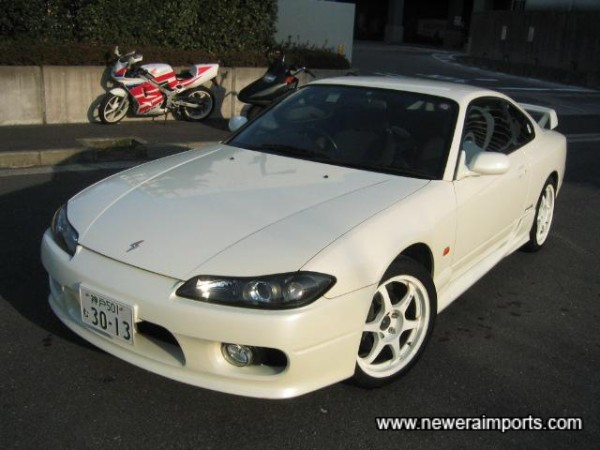 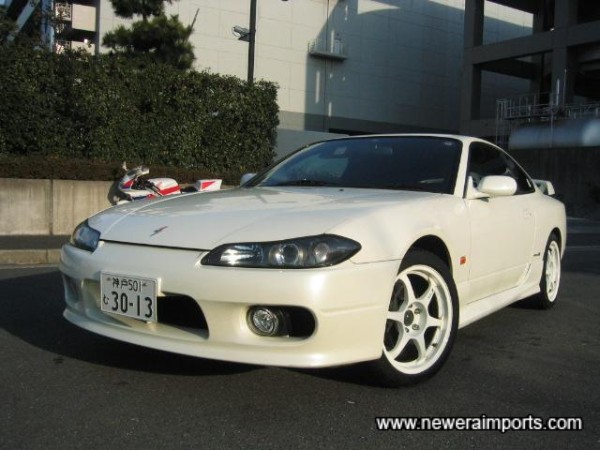 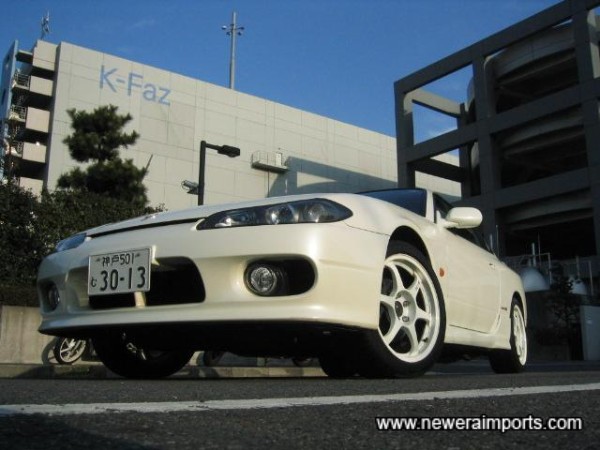 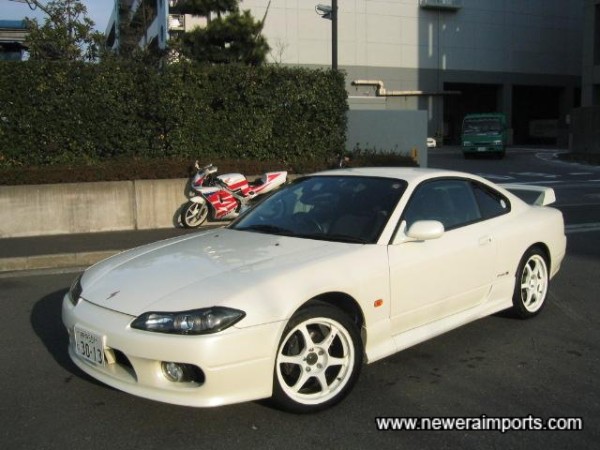 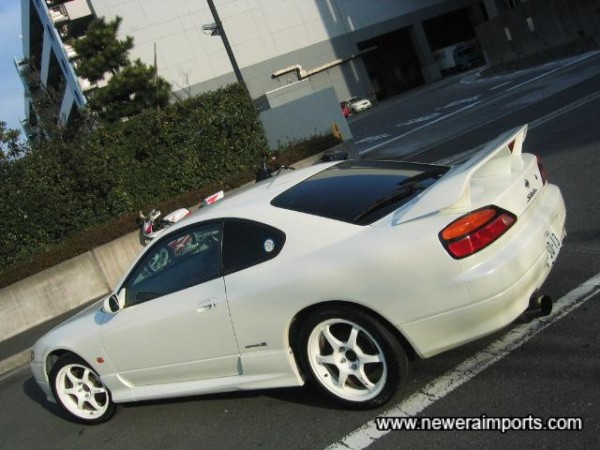 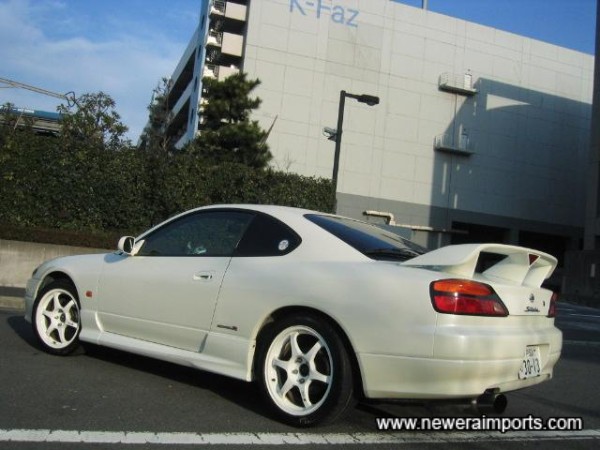 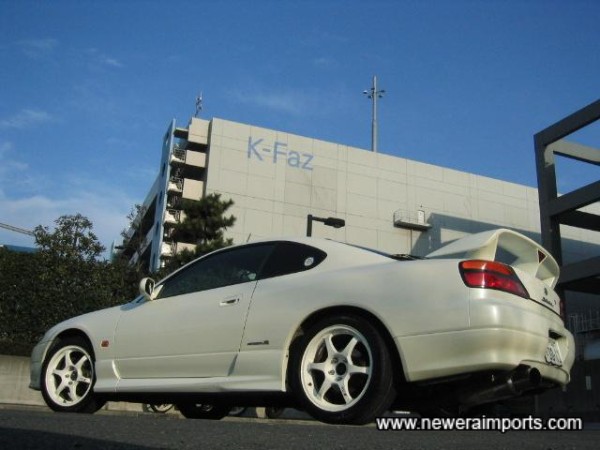 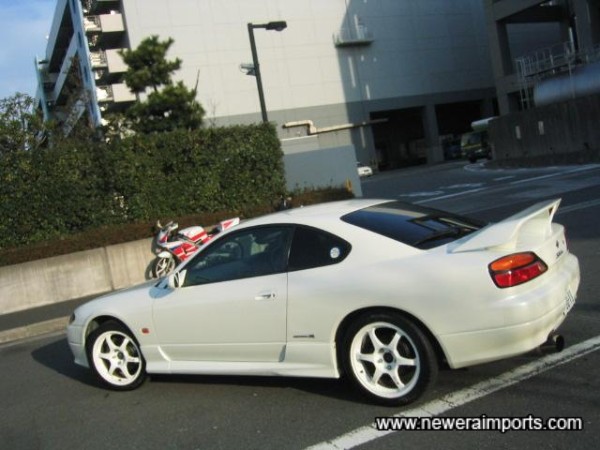 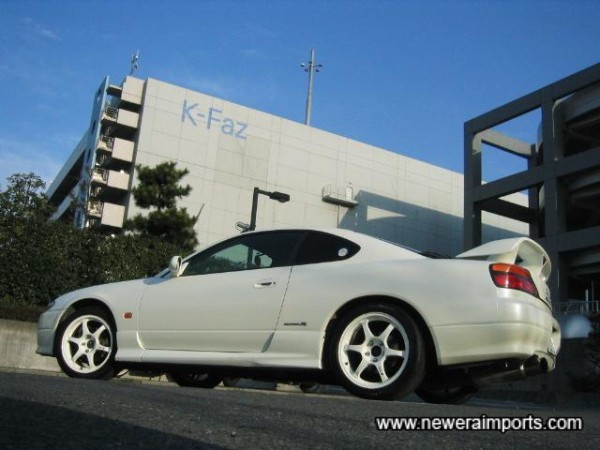 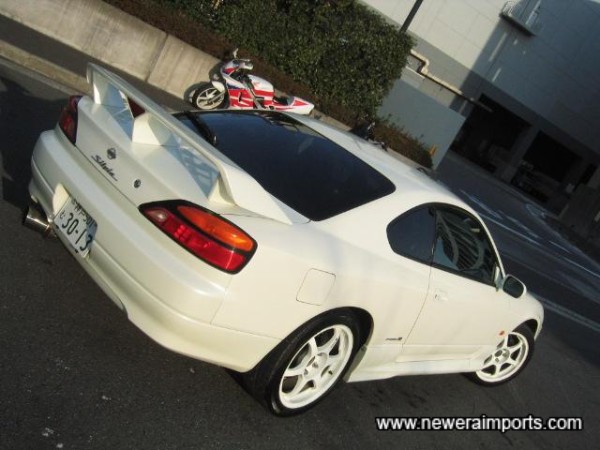 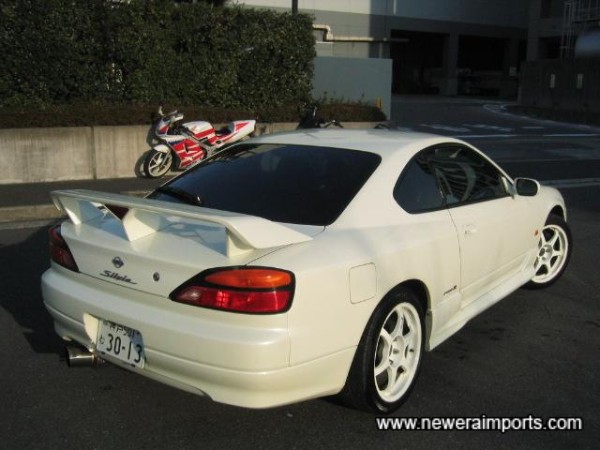 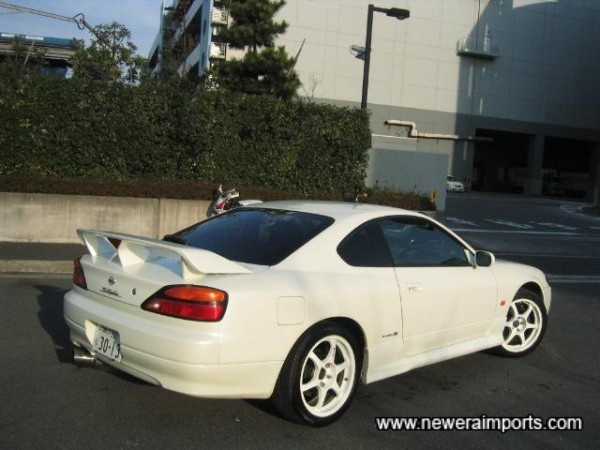 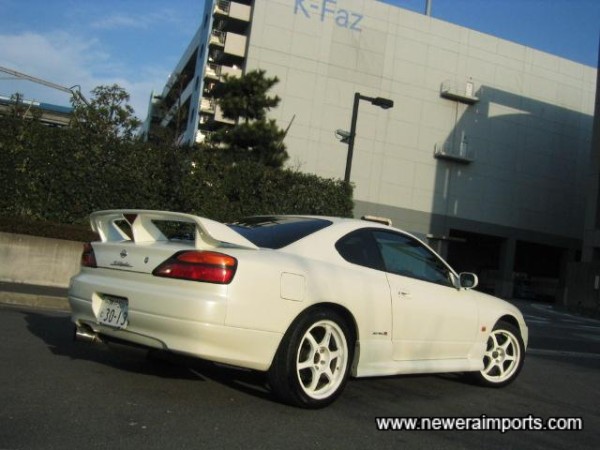 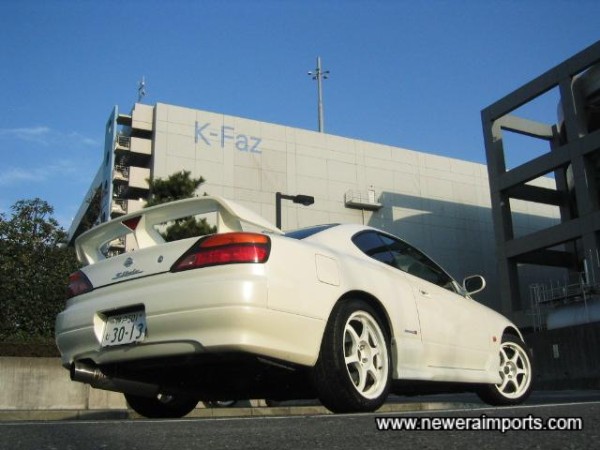 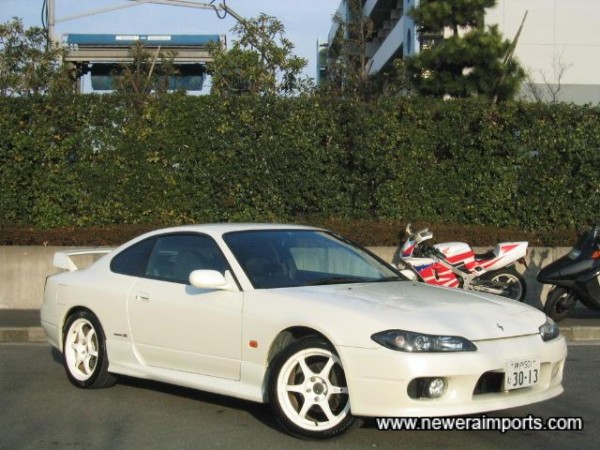 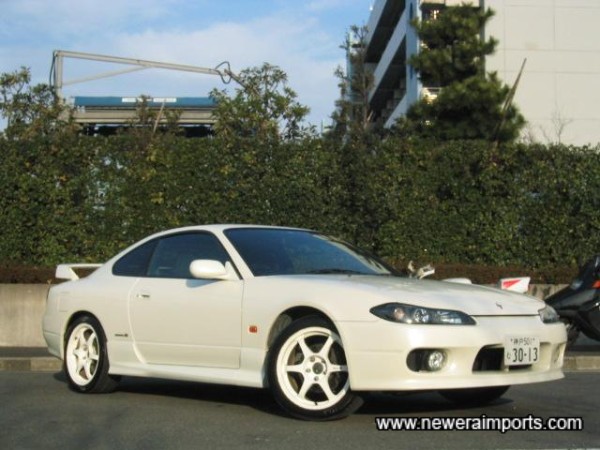 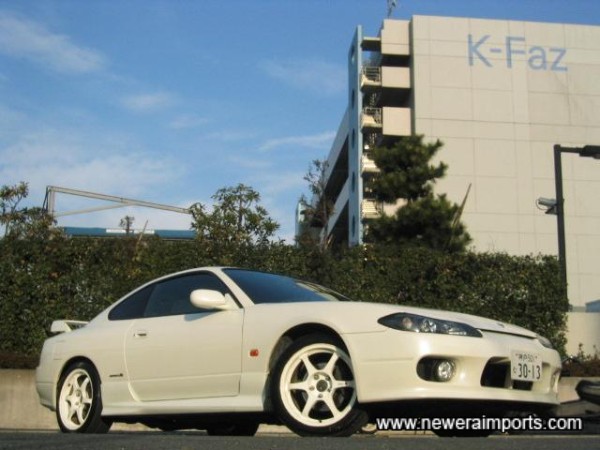 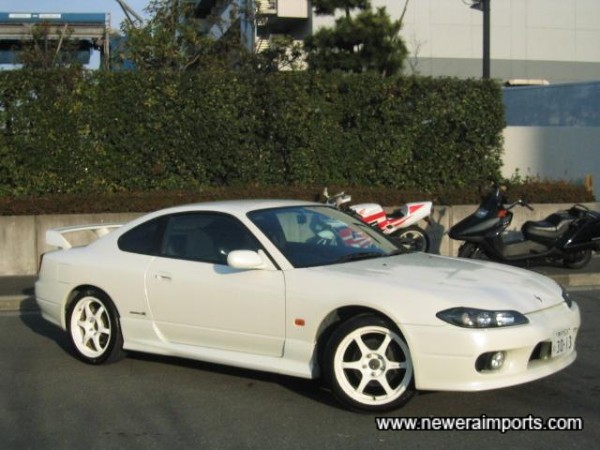 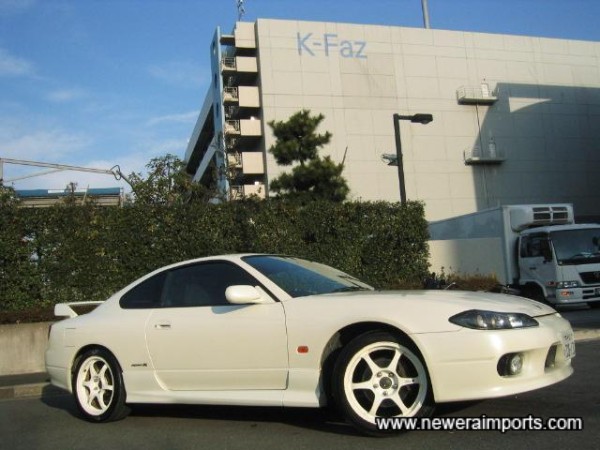 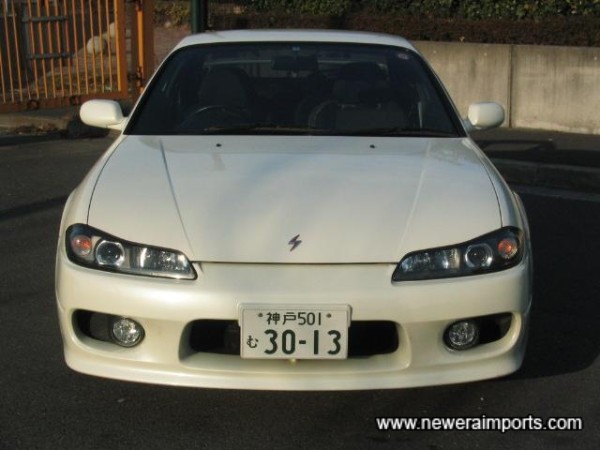 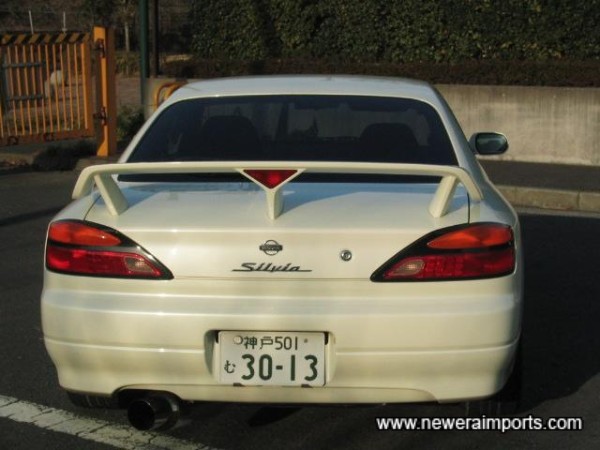 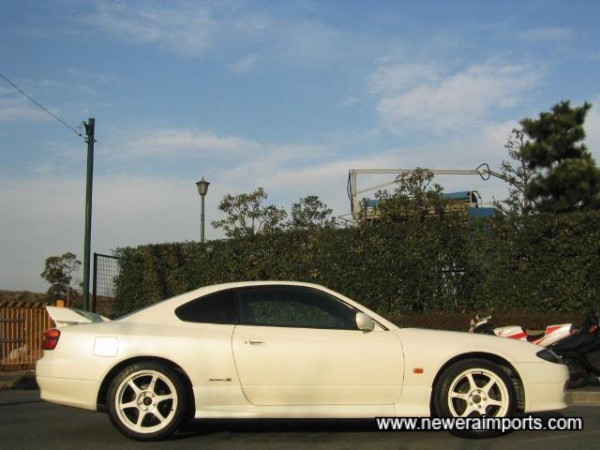 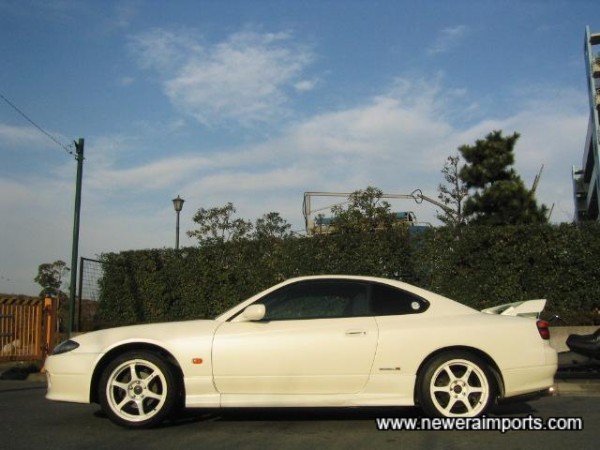 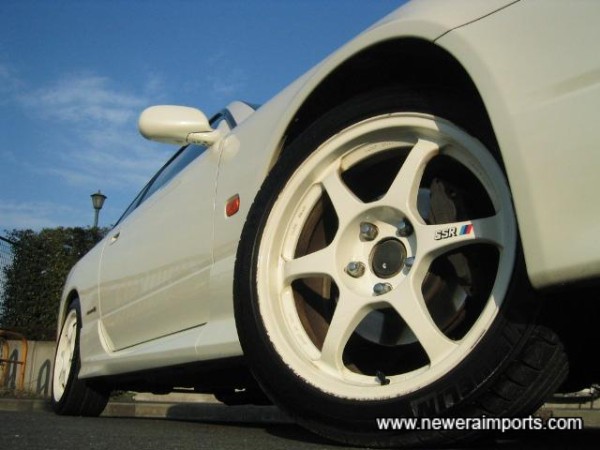 Having had a Silvia Spec R S15 as one of our own company cars, these are cars we understand - increasingly more as we continue to tune the SR20 (DET) engine and explore the delightful handling characteristics of the Spec R and other Silvia models. This example is a factory Silvia Spec R Aero version, complete with Factory option aisde skirts a rear spoiler with intergated brake light. Spec includes: Dual SRS Airbags, Climate Control A/C, PAS, ABS, Electric windows (Auto up/down on drivers side), Electrically controlled door mirrors with retract mode, remote central locking. Original fitted mats. Optional factory driving lights. A Panasonic Stradia DVD Navigation TV system together with an MD/Radio system provides 200W of power. There's also a controller for a CD changer, although we didn't search for it - as the boot was laiden with spare parts. Note that TV and Navigation won't work in the UK, although the DVD player may do so. This unit worth around £750 new is supplied with this car free of charge. Wheels are 17" SSR 6 Spoke lightweight forged items. Tyres are in good condition (See pictures).

Performance wise the SR20DET (250BHP in Standard Form at 0.55 bar boost) has an RSR Exmag GT Sports exhaust (Catalyst Back). It is louder than std, although not excessive. The original catalyst is retained. An Apexi Dual Auto Turbo Timer is also fitted to allow the turbo to cool effectively after a spirited drive, preventing premature turbo wear. Aside from these items - the car is in standard condition throughout, having never been abused throughout it's life.

The S15 is a substantially improved car than the S14a in many ways, as follows:

1) Steering system stiffness has been increased to provide improved steering feel.
2) The front strut suspension and rear multi-link suspension has been carried over to the S15 Silvia.
3)Strengthening the upper member of the hood structure and adding reinforcements to rear pillars has increased body stiffness.
4)The Silvia spec-R series is fitted with ventilated front disc brakes with opposed 4-piston calipers, highly responsive ABS and a larger brake booster.
5)The driving position has been ergonomically designed to allow quicker execution of driving controls and to provide a seating posture for minimal fatigue during driving.
6)The instrumentation is laid out with a large size tachometer positioned in the center of the cluster.
7)The Spec-R also comes with titanium-look instrument finishers and a 52mm boost pressure gauge is attached to the driver's side front pillar.

In keeping with this car's condition, the interior has no faults at all to report, aside from very minor wear on the vertical part of the driver's seat (Where the driver rubs as he gets in and out of the car) and a small nick on the driver's door trim (To be repaired as part of our UK preparation).
The auction grade of this example is 4 (Auction sheet is available) As you'll see from the picture of the sheet, the car's in excellent condition. Most Silvias have been crash repaired - not this one! This example has clearly been carefully cherished. It's in outstanding condition. Underneath, it's also like new with no corrosion at all. The only minor fault are some scratches to the nearside skirt and some minor scratches to the passenger side door mirror. These will be repainted as part of the UK preparation together with professional touching in of the wheel rim's edges, as these have minor scratches to each. Note also there's a small dent on the trim of the A pilar on the driver's side. We'll be quoting for the replacement of this, or fitment of Nissan's optional wind deflectors which would most likely hide this.Signs clearly show of this Silvia having been regularly serviced and well maintained. It would appear this car spent most of it's driven life on Motorways cruising at legal speeds in Japan, still at present retaining the standard speed limiter.

We test drove this Silvia for some considerable distance it's clear to us this car was well looked after by the previous owner - judging by the tight feeling of the driving experience it gave. Feels tight, with no squeaks or rattles and handled much like our own S15, with a very direct and responsive feel to the steering, pedals, gearshift and chassis. The engine (SR20 (DET) is an extremely tough unit that can withstand 400 bhp before internals need to be uprated at all. We would recommend fitting an induction kit, as a first modification - which is inexpensive. Even with standard tune as far as boost is concerned, performance is strong from the 250 bhp this car gives as standard. Maximum std. boost is 0.55 Bar.. With a boost controller - this car can handle 1 bar of boost - giving around 330 bhp. Beyond this, it can run 1.3 Bar provided a metal head gasket is fitted and the ECU is upgraded to provide greater fueling. www.neweraparts.com can supply a Power FC unit complete with hand held controller for under £550 and injectors to upgrade from the current 480cc (std) units, to allow more boost. The turbos on these are able to take 1.3 bar. It's almost as if Nissan intended for these cars to be tuned, which is likely, judging from the following Silvias have in Japan!

Despite the motorway mileage this car has covered so far, it feels just like a new S15. The suspension is a good improvement over standard with the cornering 'wallow' dialed out. Handling on an S15 as standard is biased toward oversteer and sometimes difficult to catch, if unexpected. This example is tight and precise, very entertaining to drive!

With only a handful in the UK - an extremely exclusive and beautiful Sports Car. Including all st, registration, MOT, minor paintwork as described, road tax (6 month's), 12 month's comprehensive Motorcare warranty and full valeting, OTR price: £13,170This car was sourced to order and is therefore already reserved. Please Contact us for full information on how you can source a similar Silvia S15 Spec R - or source an alternative.
Newera Imports - official suppliers of the Fast Furious 3 Movie cars. Consistently recommended for supplying the best Japanese Imports by UK tuners, club forums and leading Performance Car Magazines