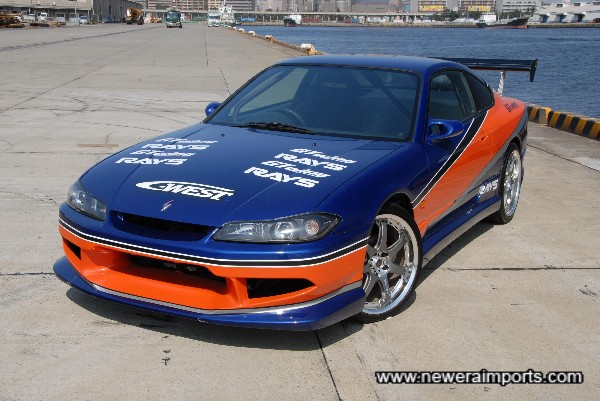 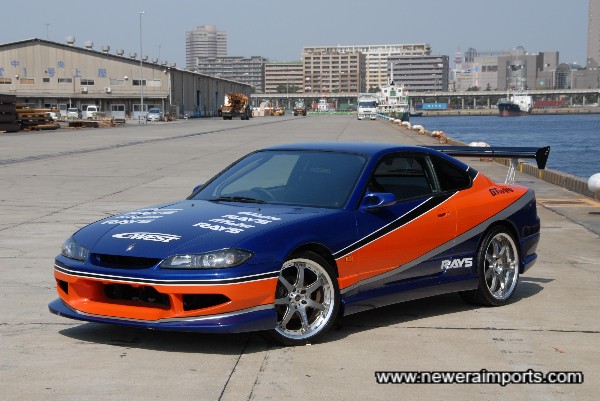 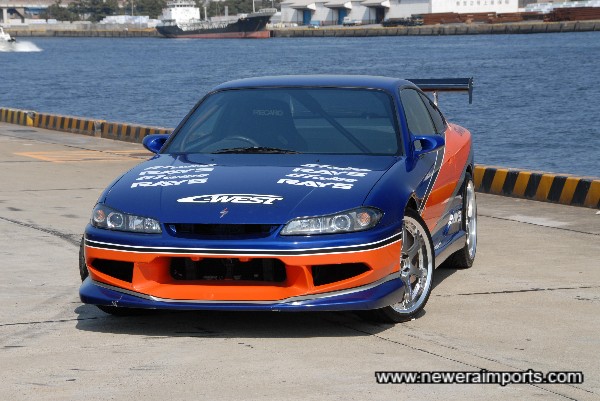 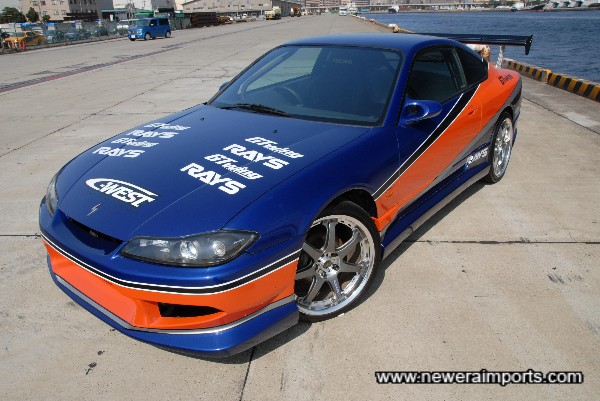 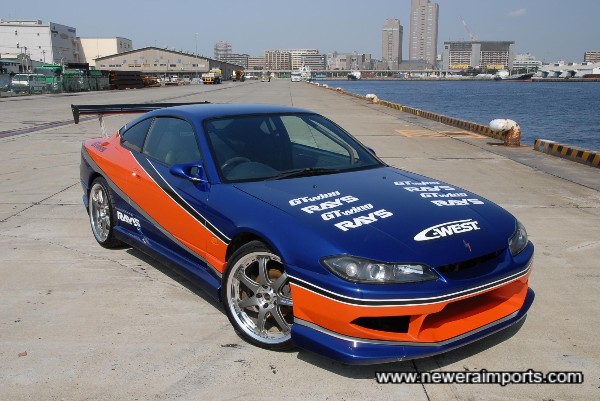 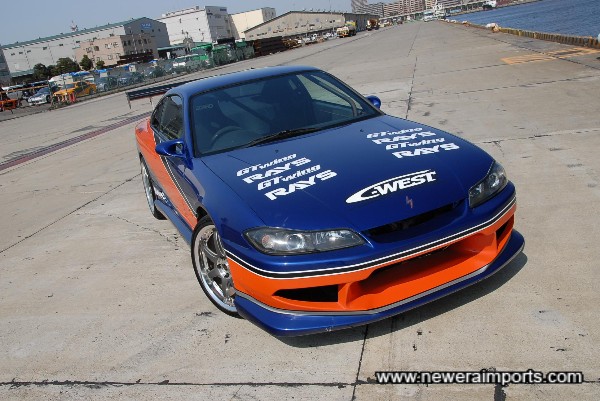 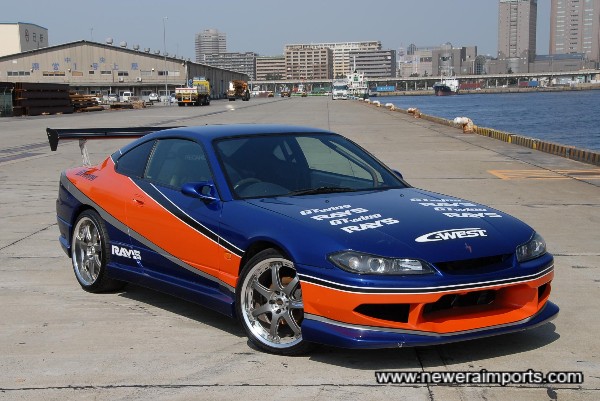 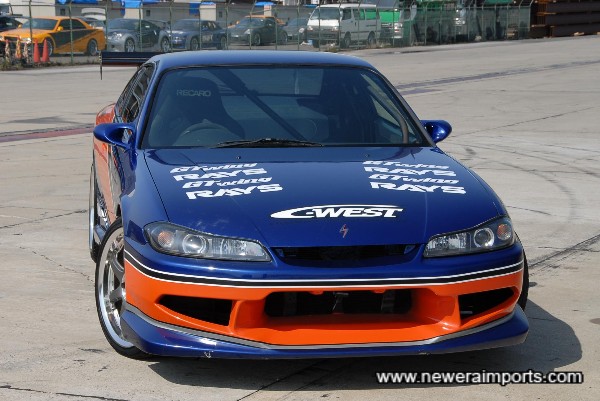 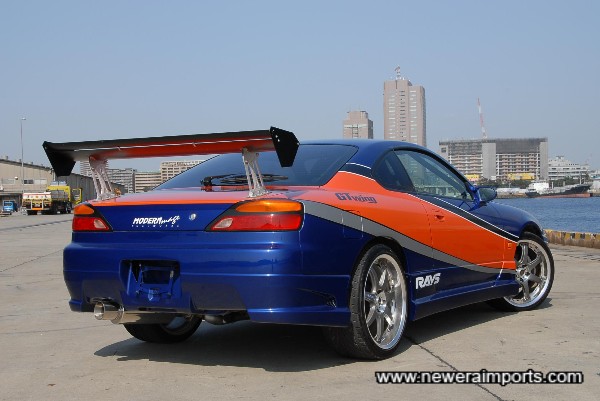 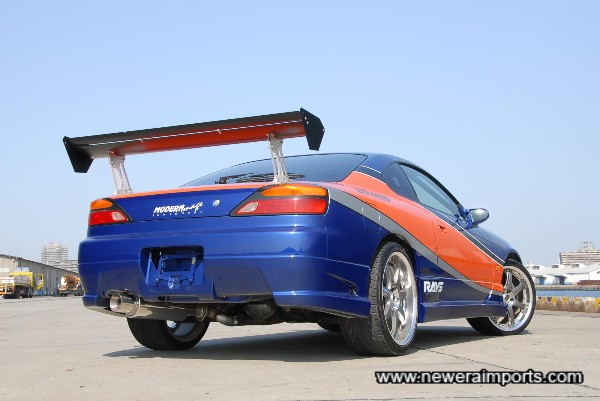 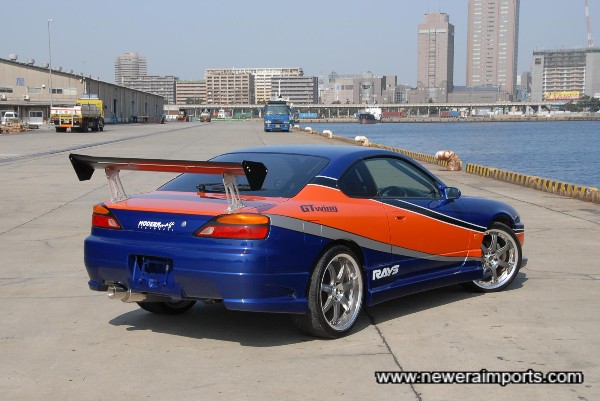 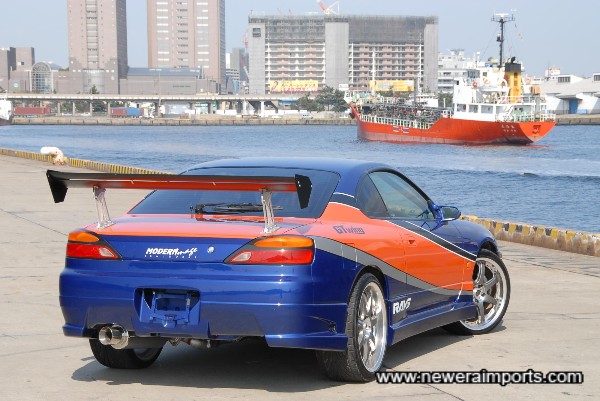 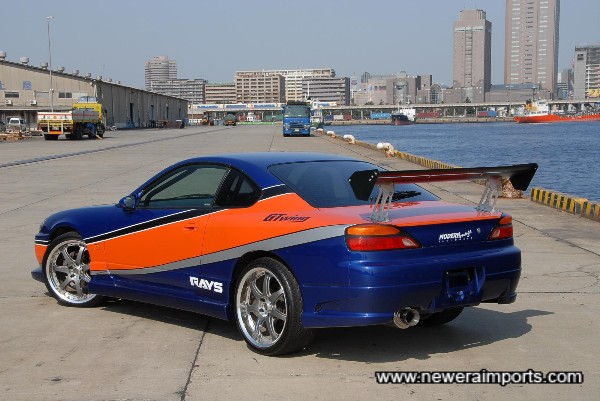 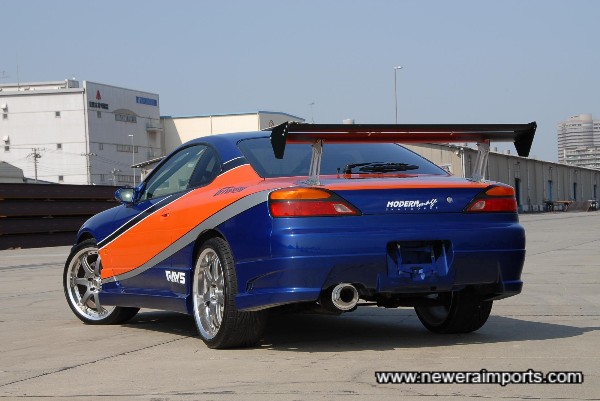 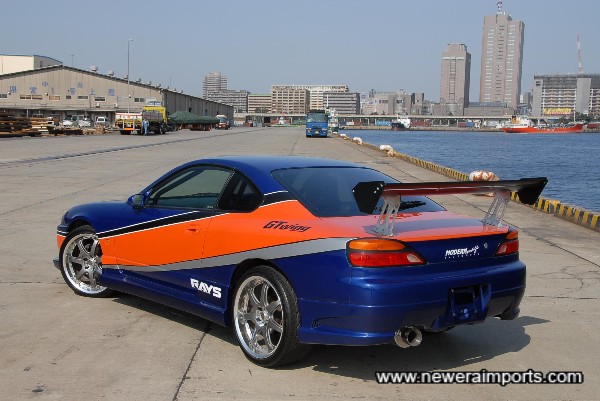 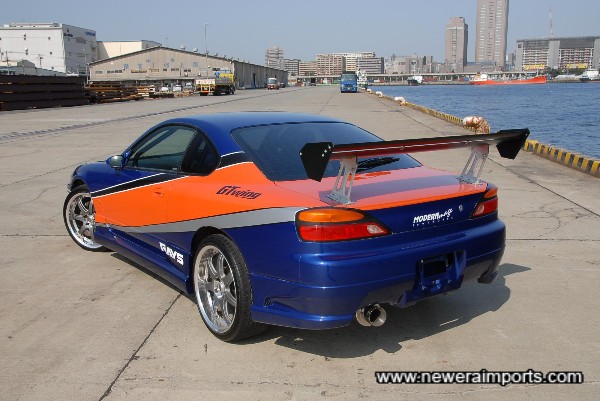 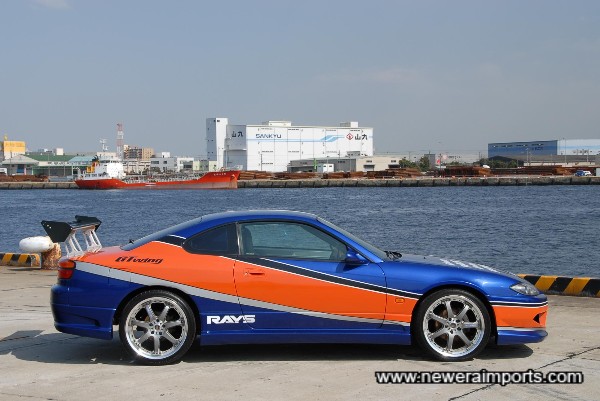 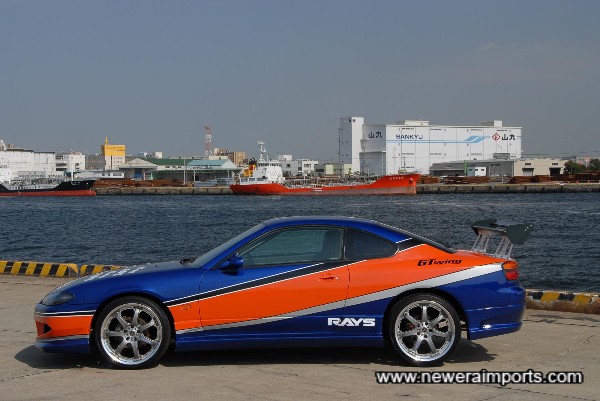 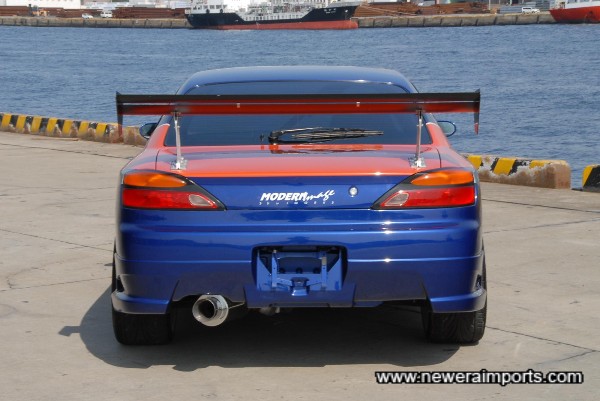 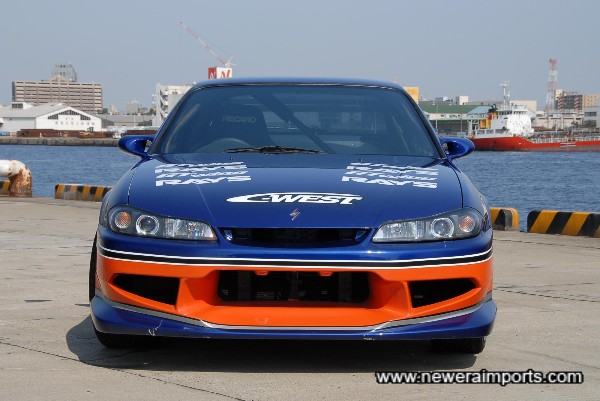 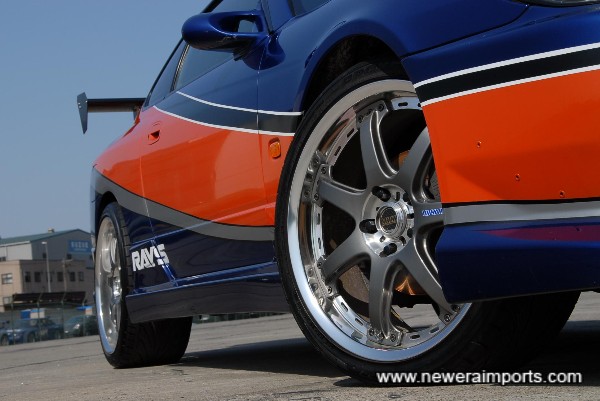 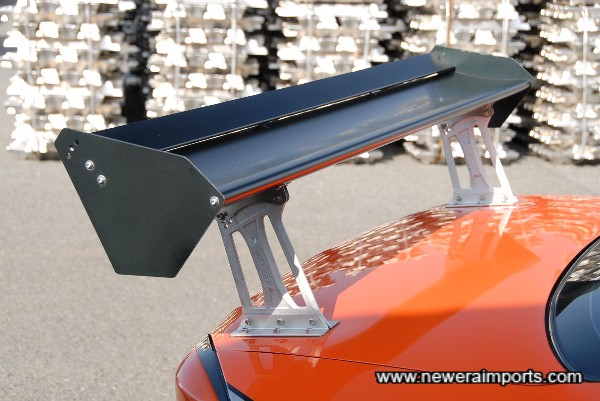 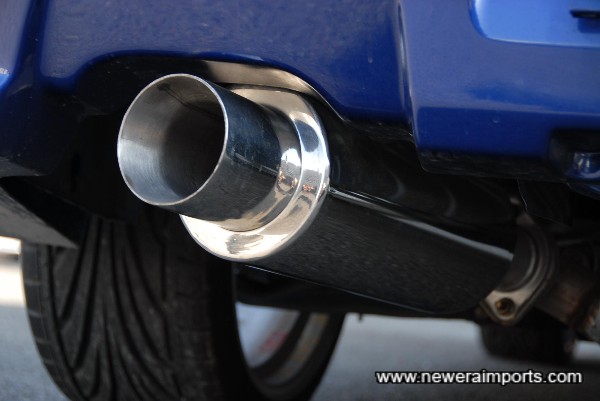 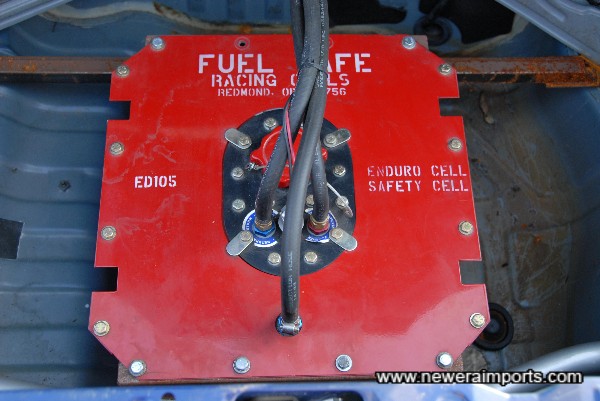 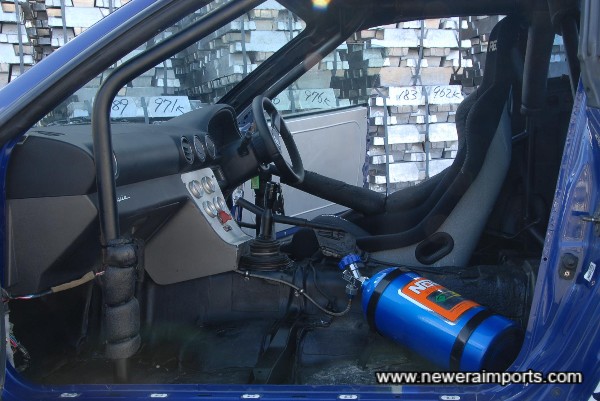 The original Silvia S15 Autech Version, as sourced specifically for Tokyo Drift - Fast & Furious 3 by Newera Imports. As originally featured in the opening scenes in the underground car park, as Han's car driven by Sean in the drifting scenes!....This particular Silvia Autech Version was originally supplied as an unmodified low mileage example - then modified in California, before use in the film. Of course, there were various identical examples used to film this underground scene. 2 of them were destroyed in filming, the remaining 2 were used exclusively for in-car filming from the front and the rear. These are the two we have (Both identical cars) available and they're only surviving examples.
Cosmetic Modifications: A full original C-West DRFT bodykit is fitted, comprising of front spoiler, side skirts and rear bumper flares. DRFT is a specially made FRP compound that's very flexible, so it won't break from minor drifting collisions. Also fitted is a fully adjustable C-West GT wing and Ganador mirrors. The decal design was specially commissioned from C-West for the film and of course, the car was completely resprayed and colour changed to blue metallic and orange before these were applied. Wheels are Volk Racing forged alloy 19" items of size: 19 x 8.0 front and 19 x 9.5 rear, shod with 275/30R19 and 235/35-R19 Toyo T1-R tyres front and rear.
Mechanical Modifications: Engine is a Factory Autech unit, with 200 bhp as standard, which has received a full HKS 4-2-1 exhaust manifold and SARD arouse Mig R exhaust system, so it's currently making around 220 bhp, with a 50-100 shot of giggle gas also available..!A Nismo clutch and Nismo 2 way differential, combined with an extended quick release handbrake make drifting easy. Being N/A this combination sounds a lot nicer than a turbo'd car, which is why these were chosen instead of turbo examples - for filming. Being an Autech factory version, there's a 6 speed gearbox also fitted. In the boot, there's a full safety fuel cell too.
Interior: there's a Recaro FIA approved bucket seat and a new original Nardi classic steering wheel trimmed in suede. The interior trim has been removed, with all but the dashboard remaining. A NOS bottle and plumbing have been installed in place of the passenger seat and a roll cage also fitted. An alloy centre console was fabricated to house the Autometer gauges and Nos switch within the driver's reach, with matching alloy door trims and rear most trim also fitted. The switches for the electric windows have been attached to the roll cage. Note that for filming no A/C - heater controls were required, but these will be needed for road use. We will supply a climate controller panel to go with the car.
This car was originally sourced as a completely standard clean example - so it's had all the above added just for use in the film - having covered less than 200 miles since. Having had a previously easy history it's in excellent mechanical condition with no previous accident damage. We've test driven and can confirm there are no mechanical faults at all. Being lightweight (1,100 kg approx), this is a fairly quick car and it will go sideways with ease, especially as it has a 2 way differential.
Interior and exterior faults: As mentioned above, there's no heater controls fitted. These will be supplied with the car. Gauges are for cosmetic purposes but have not been connected. Sensors will be required to complete. The NOS bottle is also not connected currently, as this car wasn't used for actual high speed driving scenes.
There's a small chip of paint on the driver's door and also some minor chips on the door edges. Also some chips on the front bumper and bonnet rear edge (Where the bonnet was removed for attaching camera mount to the engine bay, to film the driver.
This car is of course currently fitted with only one seat. We can supply an additional seat to be fitted - and the Nitrous bottle can be re-sited. Other parts are also available if the owner wishes to return the interior closer to std. This presents a unique opportunity to own a very collectable and world famous S15 with £1,000's spent on modifications, at the same price as a standard S15 Spec S would usually be available 0,350 Includes all costs such as full UK conversions, minor repairs to paintwork for faults described, 12 month's comprehensive warranty, valeting, cost of road tax and new MOT. This Silvia S15 Autech Version 6 Speed will be prepared by ourselves in our workshop based just outside of Brighton, where our UK office is based.
This car is also available for supply to Ireland, Europe and other countries at FOB price only (Please inquire). Currently stored in Yokohama, Japan - this car is ready to ship, worldwide (Another identical example is also available). Please Contact us for further information regarding this unique Silvia S15 or to source an alternative top condition quality Silvia.
Newera Imports - Source of all the original Tokyo Drift - Fast & Furious cars. Now exclusively available to customers worldwide, only through www.neweraimports.com!