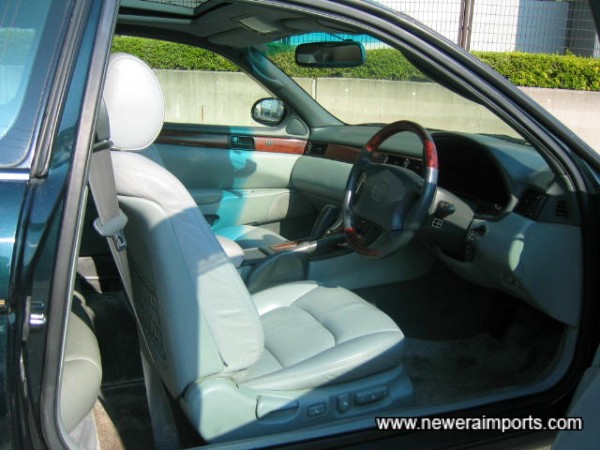 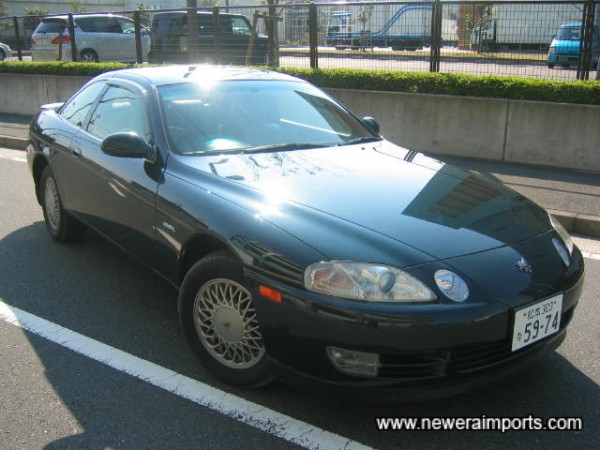 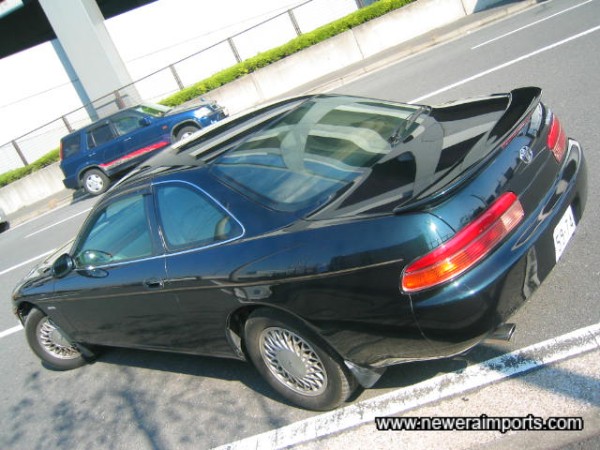 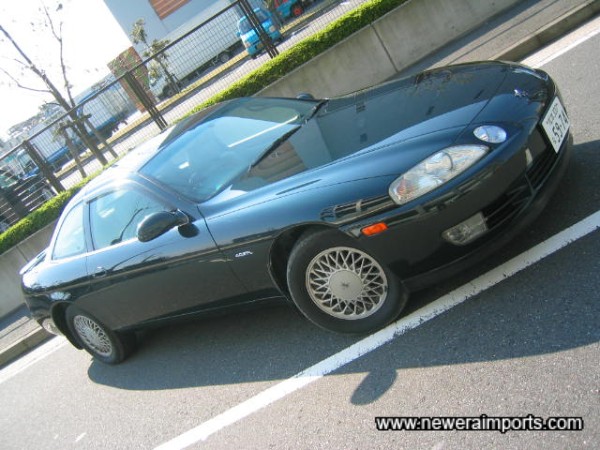 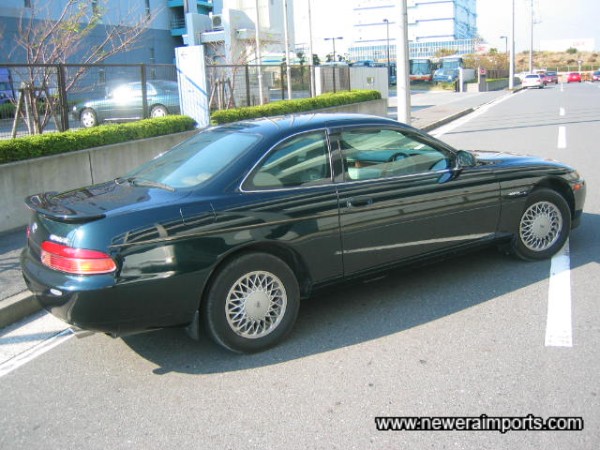 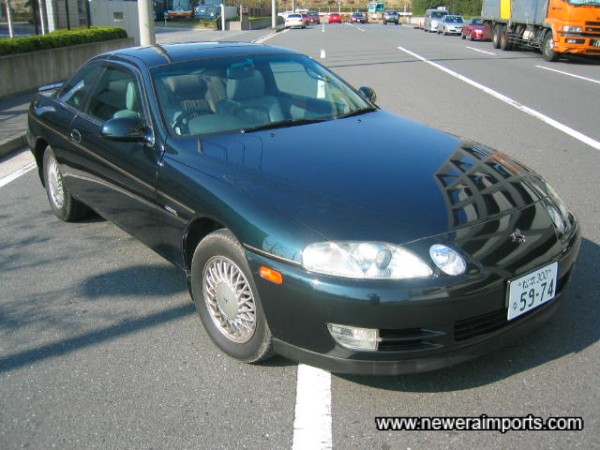 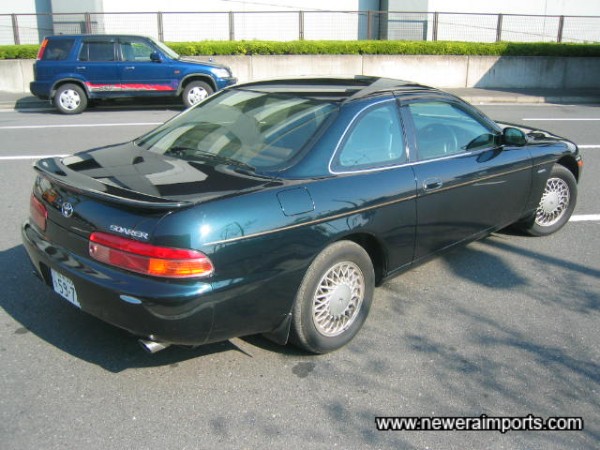 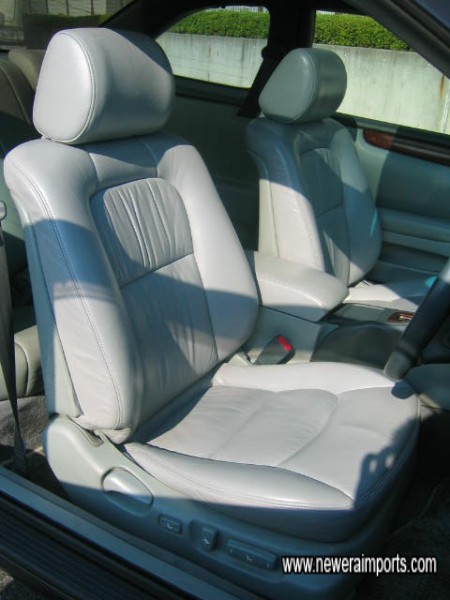 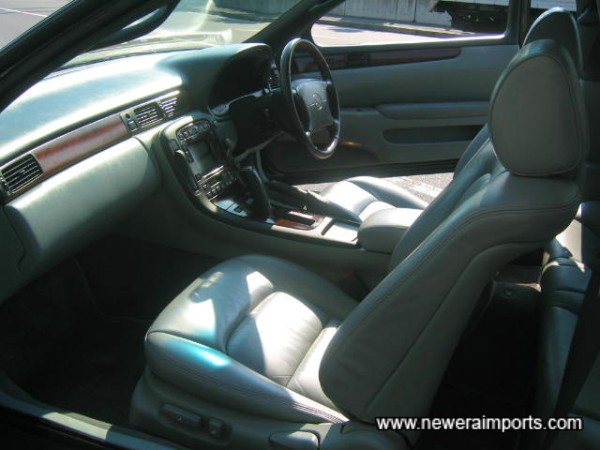 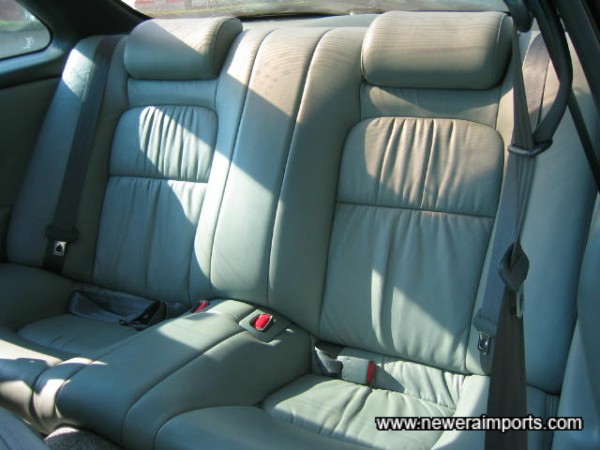 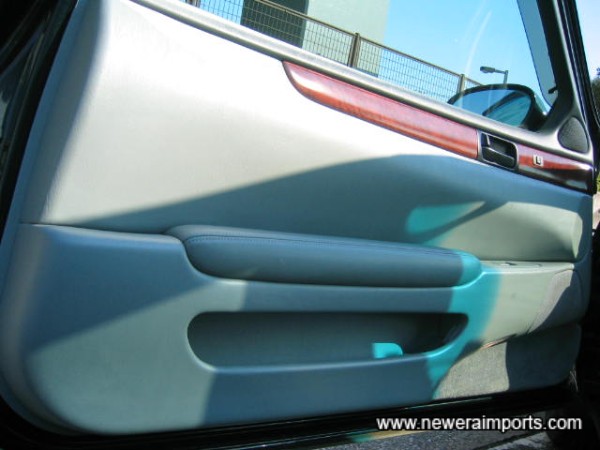 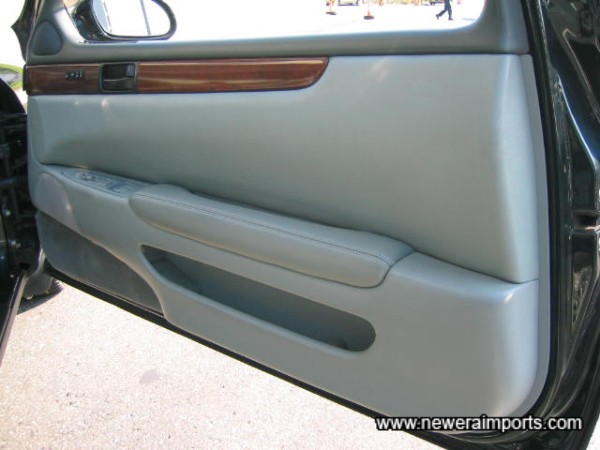 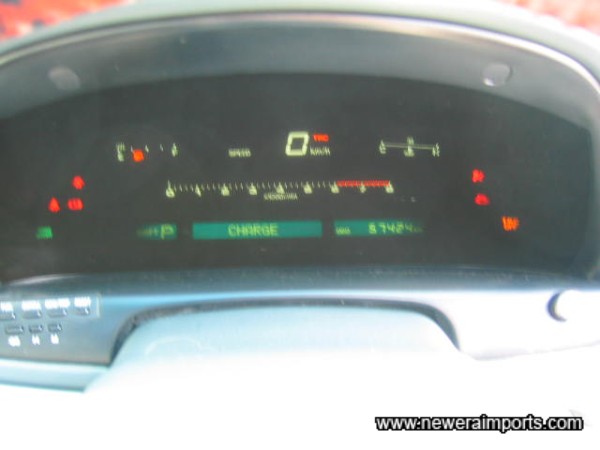 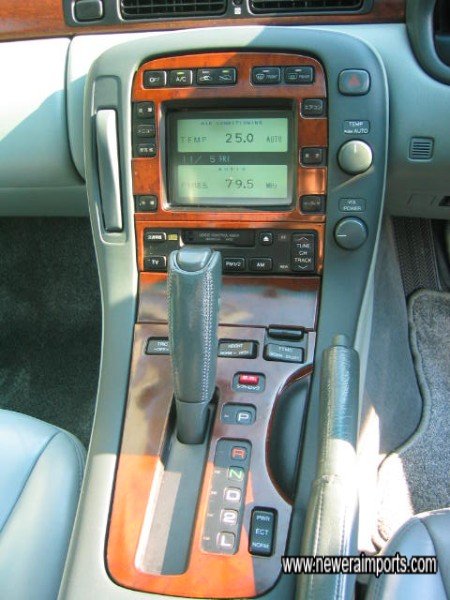 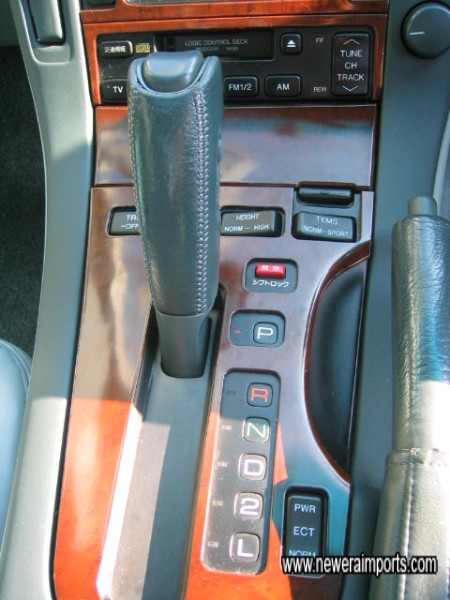 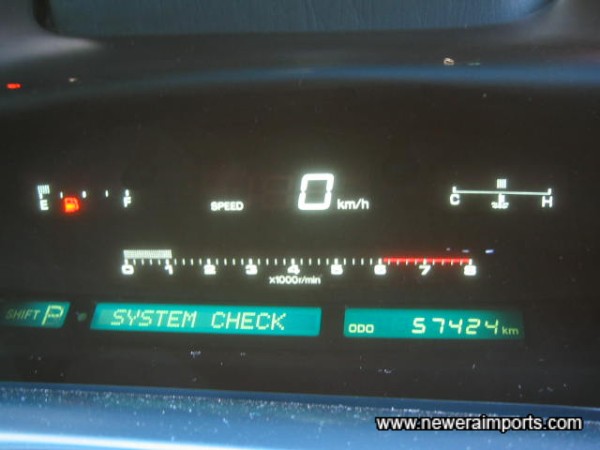 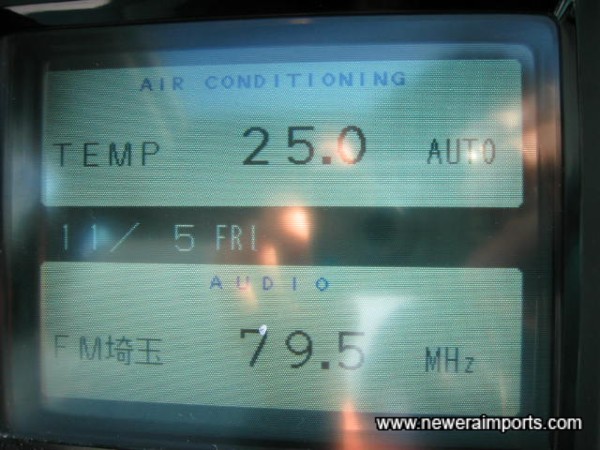 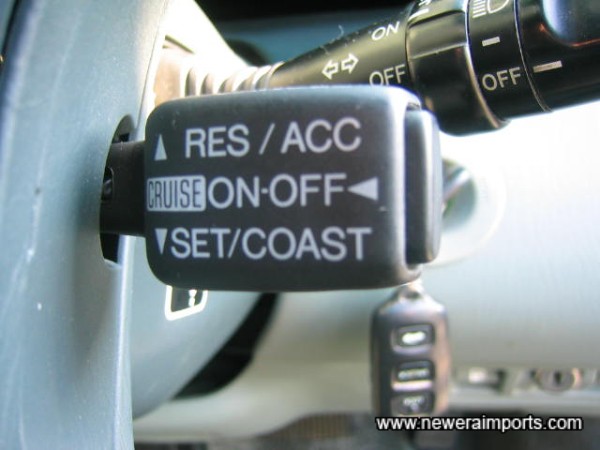 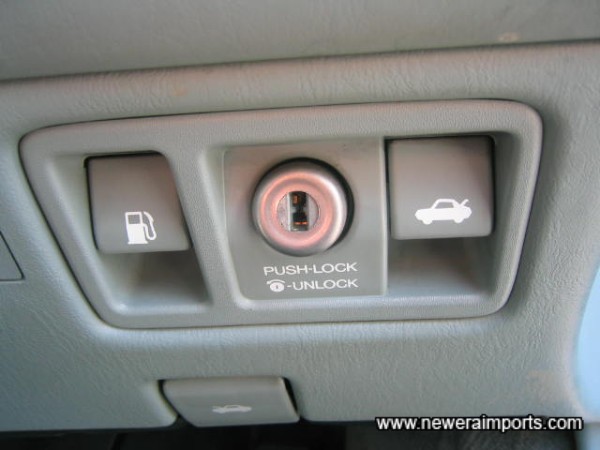 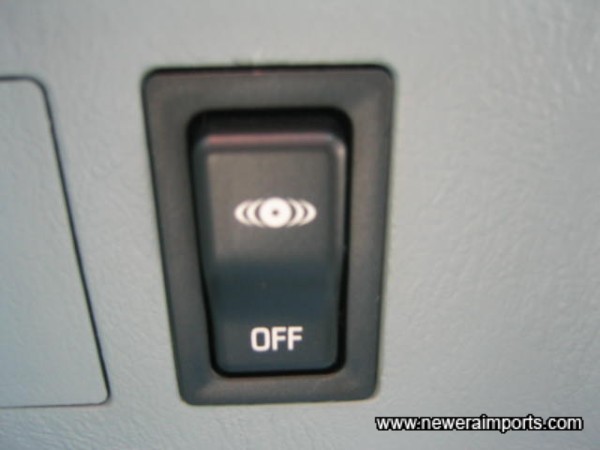 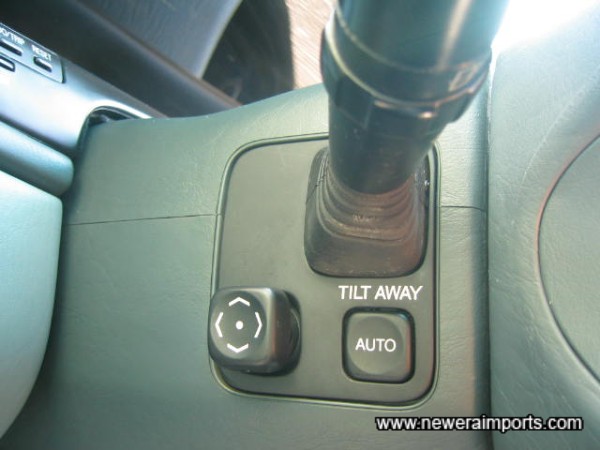 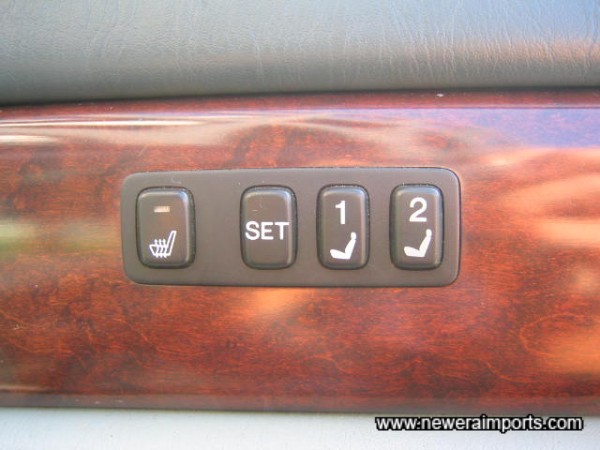 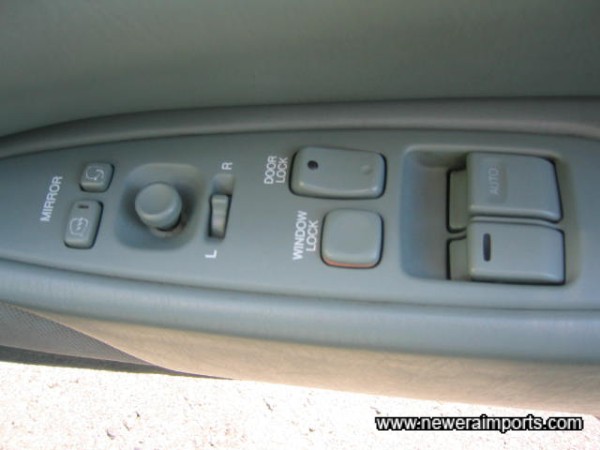 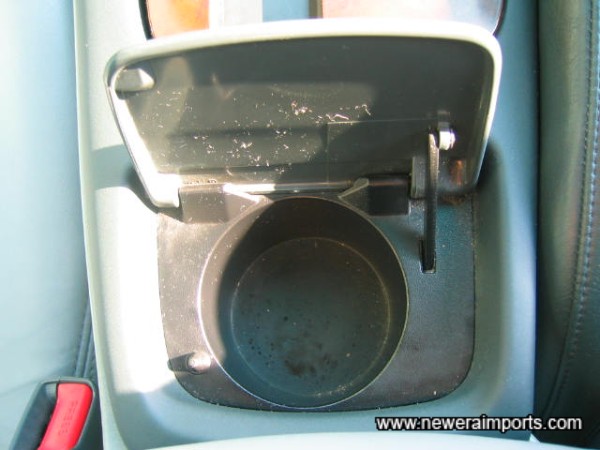 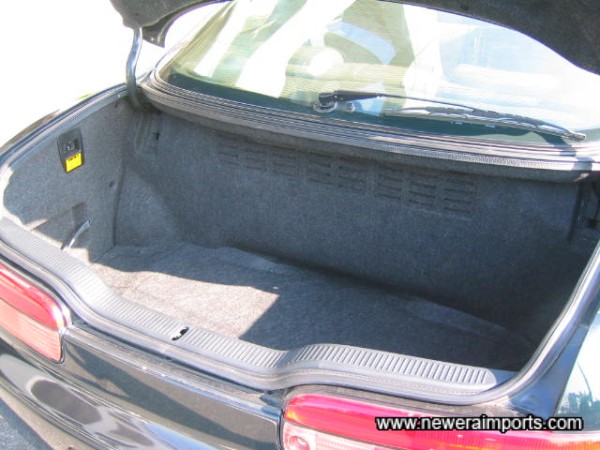 Equipment is complete: Full light blue leather, Electric glass sunroof, Wind Deflectors, SRS driver's airbag, Wood Trim, Cruise Control, Electric front seats with memory settings heating, steering wheel will fold up and inwards electrically to allow the driver maximum ease in getting in out of the car. Also fitted are original deep pile carpet OEM fitted mats, Parking sonar for the front of the car, rear wiper, ABS, Switchable Traction Control, PAS, Climate controlled A/C with display on screen, High quality integrated hifi with CD Changer in the boot, TEMS adjustable suspension both for normal or high ride height and also Sport / Normal firmness.
Updated lights are fitted and include driving lights integrated into the front bumper. The door mirrors are of course electrically operated, but also have a facility to ultra-sonically clean themselves and disperse rain droplets. A TV is also included in the repertoire of goodies, though it won't work in the UK without special modification. Typically this costs approx. £400 to have converted professionally by a specialist.

Fitted of course, is a V8 4 Litre engine of 280 bhp +
This is Lexus' legendary 4 litre V8 on which you could balance a 50 Pence piece at idle (So the UK advert said of same engine in LS400's).
Driving this car to test - it showed itself to be faultless as would be expected of a low mileage example such as this. When driving it out of our yard, which is a gravelled and bumpy surface, the car was composed with no squeaks and rattles, showing it's still as well put together as when first built. On the open road, the drive is truly excellent. With a very smooth automatic change, the engine pulls with strong torque at any engine speed. Sound is quiet with no wind roar, although the sound of the V8 can be heard as the car is made to accelerate. Steering felt good, with good brakes - no dramas of warped discs apparent, which would indicate this car's been driven gently by it's previous owner - as also apparent by the car's condiition. We'd expect this car has been owned by a mature Japanese man, probably used only for weekends.

The auction grade is 4. Interior is in excellent original condition, as is the exterior. This has been a non smoker's car since new. There are no faults to report with the interior. On the driver's door there are 2 light pin dents. Also, on the rear bumper is some touch-up paint on the centre section. These faults will be repaired and resprayed. The rear o/s quarter has previously been repainted. This is visible through a very mild difference in finish of the laquer, so we'll have this repainted to match. Also, on the bonnet - there are 3 very small stone chips. These will be touched in carefully when the car's having other paintwork done. Tyres are each worn and cracked due to age. We have budgetted £250 as part of UK preparation costs to replace these, although if if preferred we can source some 17" or 18" alloys, instead.
A truly stunning completely original example of a rare facelift Soarer GTL. Inclusive of UK modifications, MOT SVA testing, UK registration, £250 towards replacement tyres, paintwork as described described valetting,