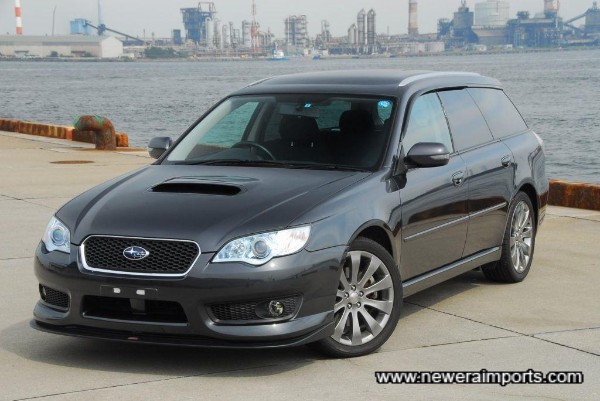 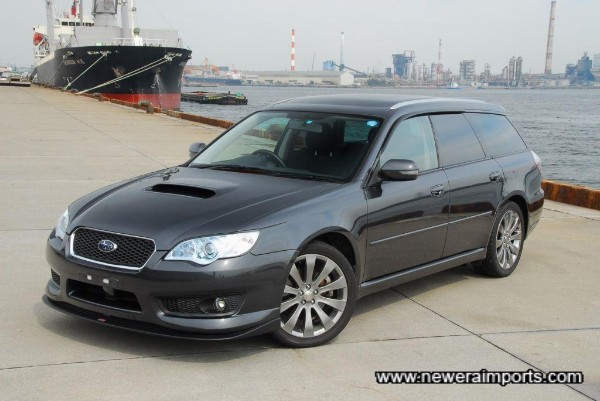 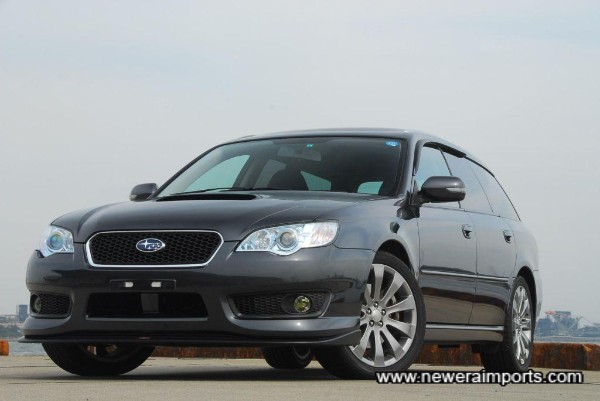 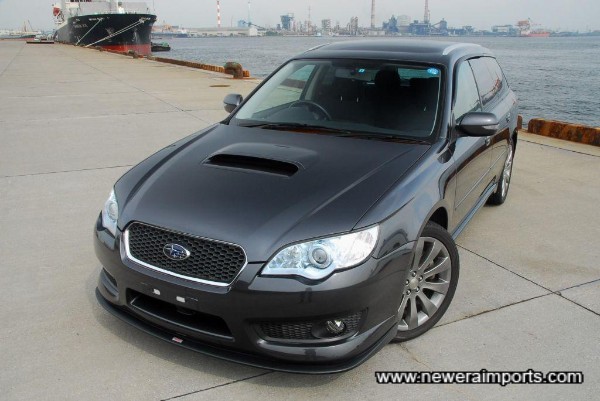 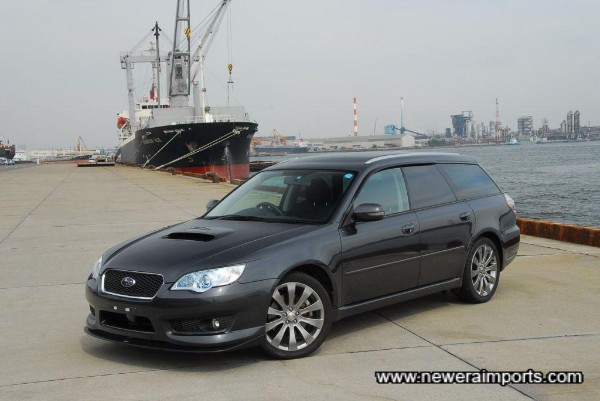 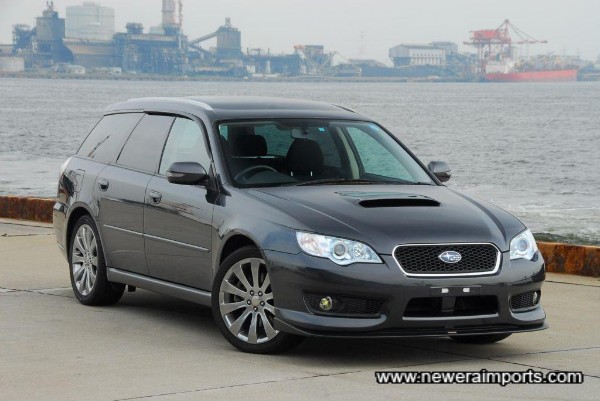 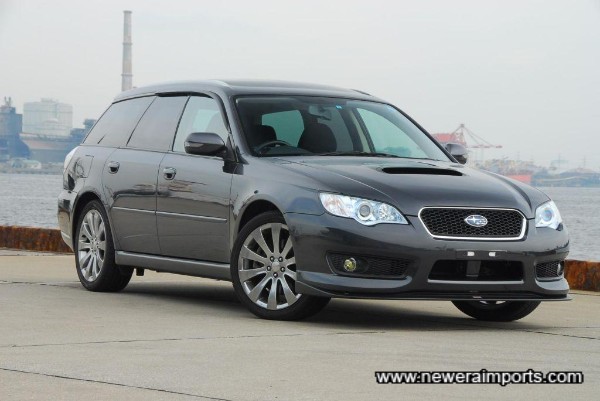 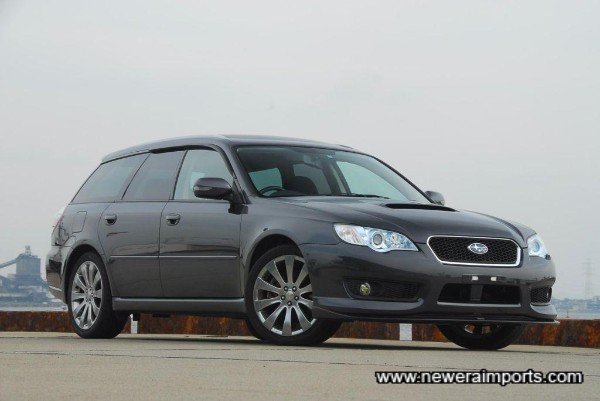 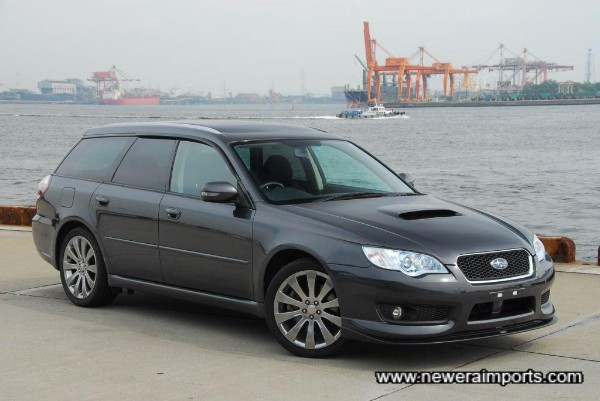 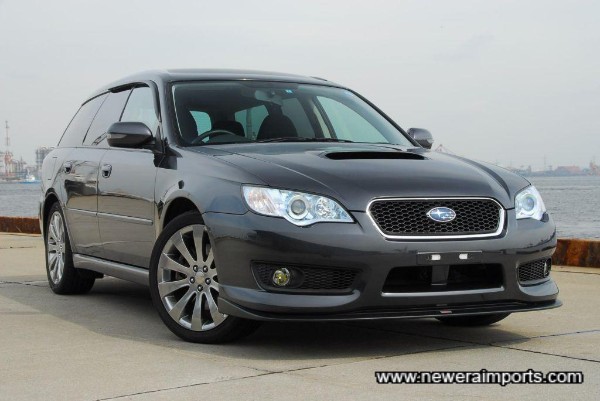 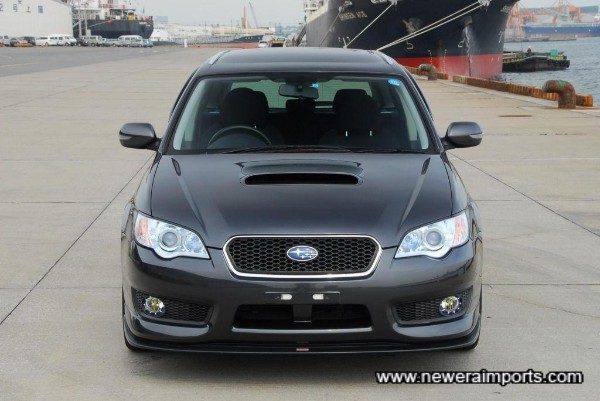 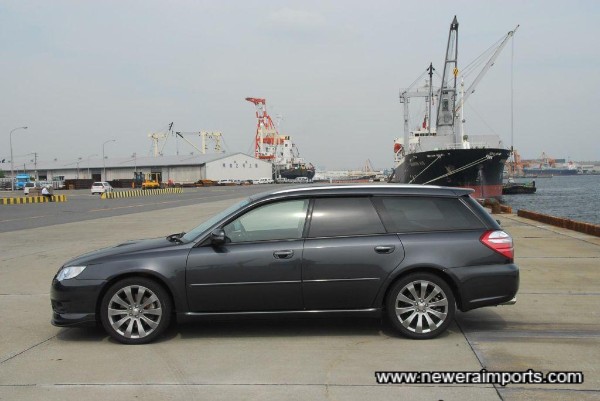 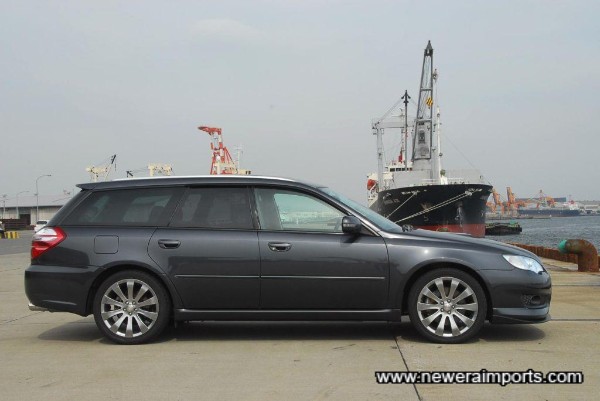 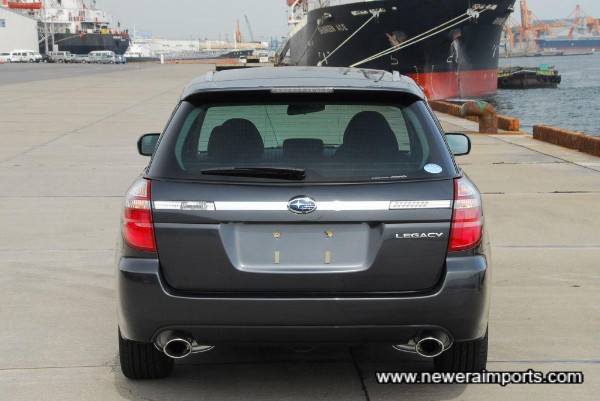 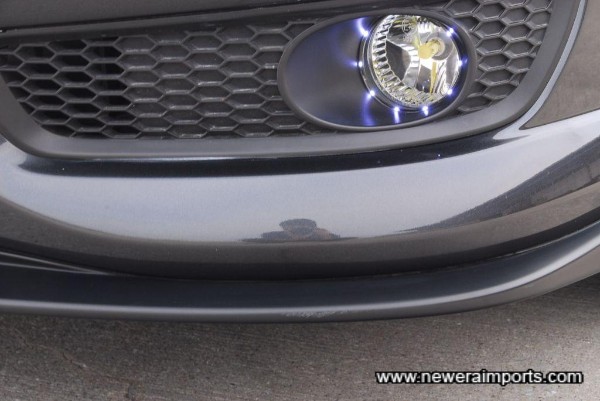 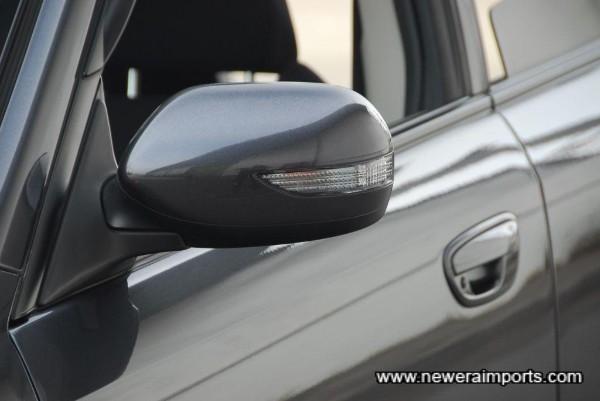 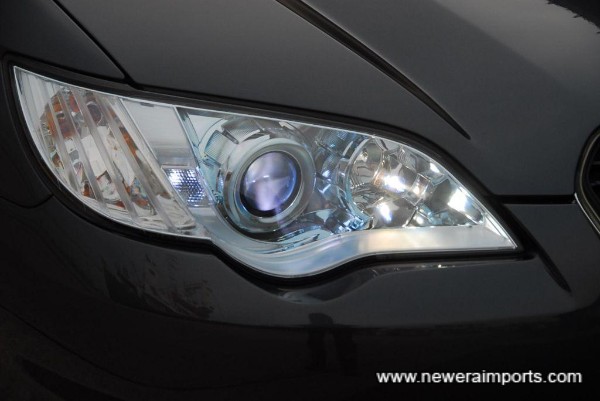 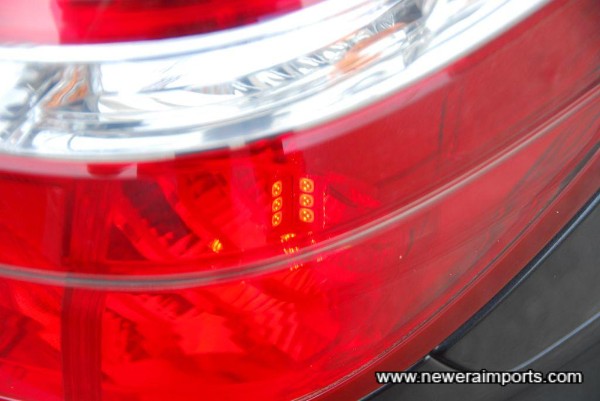 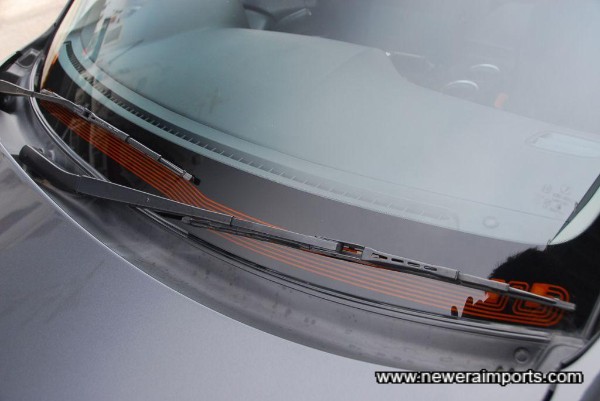 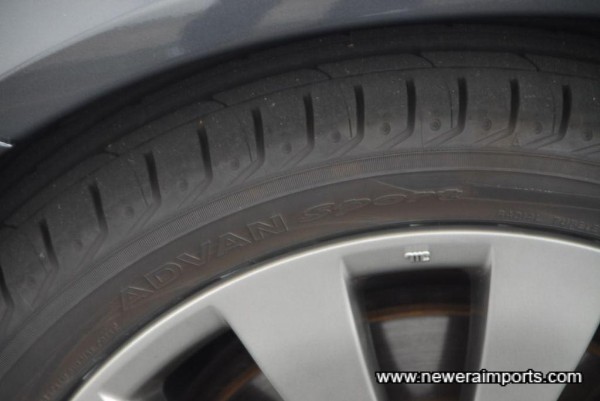 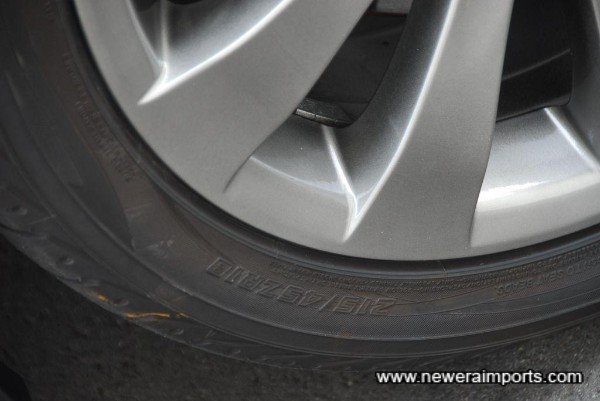 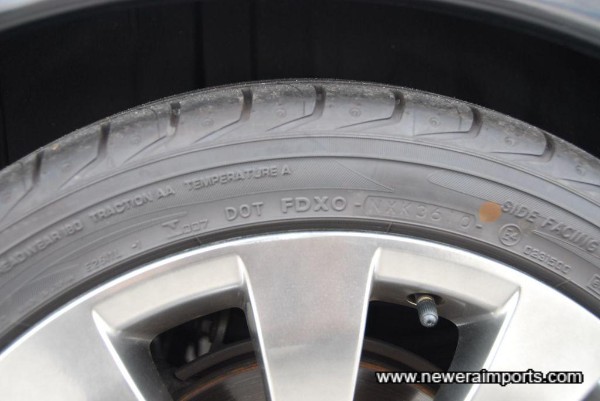 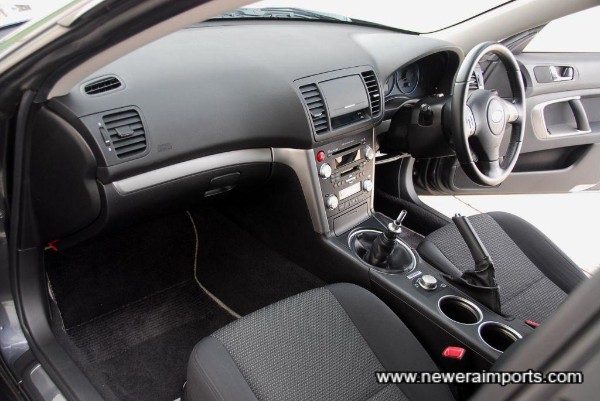 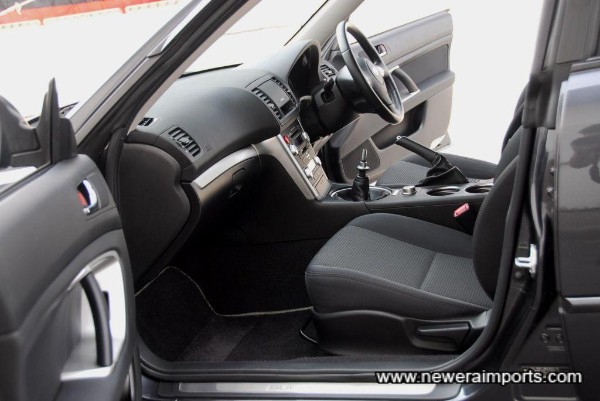 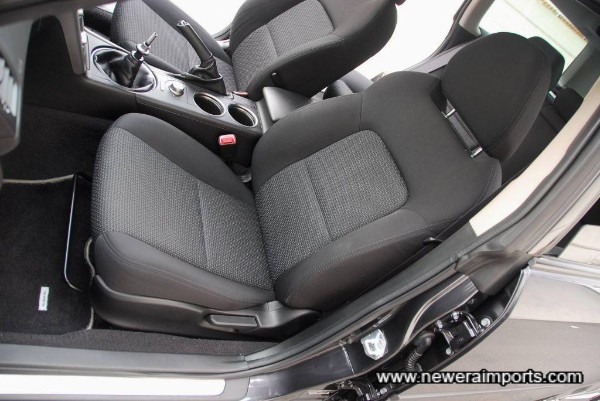 
The Subaru Legacy 2.0 GT spec.B sports wagon was released as a Japan only model in 2003. In 2006 it was updated with minor bodywork (headlights in particular) revision, a 6 speed gearbox for manual models (from 5 speed) with some interior revisions including the centre console and seats, along with an updated Momo leather stitched steering wheel with central controls. Additions on the 2007+ models also included a 6 speed manual transmission with a Torsen R180 rear differential from the STI Subaru Intelligent Drive (SI-Drive) with three modes: Intelligent, Sport, and Sport Sharp. These adjust the throttle maps in combination with firming of the Bilstein suspension for when the driver wants a sportier response. There are many clever features on this model, which combined make for a very capable, versatile and fun family car.

This example was sourced to special order for a customer in UK who had already owned a Legacy E-Tune since new, for about 10 years. He wanted the rarest spec. a late model low mileage example in a choice of 3 colours with rare manual transmission along with standard Facelift Spec.B characteristics.We were initially only looking for 2009 models, but understanding that condition of cars in Japan is not necessarily corresponding with age, the customer widened his year range we searched for the best facelift example we could find. This is the result. This Legacy GT Spec.B has had one owner since new, has been stored under cover and has never seen salt (It's underside is still like brand new).It’s of performance standard spec. throughout except for the front lip spoiler which is a Subaru (STi) Option. We noted this model seems to have a winter-pack as it includes wiper heaters rear LED fog light integrated into the boot trim.
Interior Spec includes: Alloy sill trims, Electrically adjustable seat (Driver only), Keyless engine start button, Momo leather stitched steering wheel with SI drive audio controls, 6-disc CD player with MP3 Aux inputs for the hifi, HID headlights with height adjustment, air conditioned cubby box well positioned drink holders, sunglass storage, alloy pedal covers, full fitted mat set, 3 x 3 point seatbelts in the back, with modern child seat fittings, anchors in door shuts for rear door side impact bars, electrical release for rear seats to fold automatically, pilarless windows with privacy (for rear occupants) anti UV glass , climate control air conditioning, SRS airbags, electrically adjustable and folding door mirrors with integrated LED side repeaters, retractable rear luggage cover, storage areas, etc. Note in the absence of (useless in UK) a Navigation system the dashboard's centre unit is a cubby box with a clock. Exterior Spec includes: Original 18 inch wheels (Shod with recently fitted Yokohama Advan Sport tyres of 215/45R18). Brakes seem to be larger diameter on this than pre-facelift spec.B models). Facelift headlight design, Optional PVC front spoiler. The previous owner fitted decorative LED's to the circumferance of the original driving lights and also replaced the bulbs on the rear clusters with LED. The former can easily be removed if preferred.

Condition: Interior’s very clean. Steering wheel has virtually no wear and the seats show no significant wear either. Floor mats are nice. Boot area is tidy with no damage from carrying heavy goods. Note this car has been owned since new by a non-smoker. Original auction grade was 4.5. Bodywork is good quality. Looking carefully we found the following (Which were repaired before the car’s delivered to our yard ready for shipping): Front nearside bumper corner had a 2cm scratch, Front nearside door moulding had a thin 6cm scratch, Rear o/s bumper corner had scratches, Front n/s wheel has one of the spokes scratched and some scratches on the rim edge.The PVC Optional rear spoiler has some light scratches on the n/s/f corner and underside. These are also barely noticable however.
Other faults too small to require repainting of panels: There are some light scratches on 2 of the other rims, but these are barely noticeable. There's a small pin dent on the bottom corner of the driver's door. Access to this from behind was limited due to side-impact bars and as it's so small it was left as is, rather than repainting. There is also a small scratch on the driver's side step and another on the bonnet's leading edge. We will be supplying a colour matched (Code 65Z) touch up pen with this car, so stone chips can be promptly taken care of in future.
Engine is smooth and quiet. We only had the opportunity to drive this car a short distance, but it was clear it drives like new with no rattles or fault. Suspension is firm, but compliant. Feels like a very high quality car that will be bullet proof for long mileage and years to come.