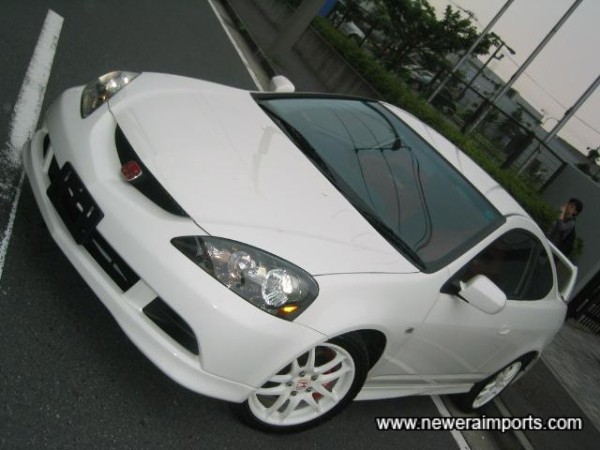 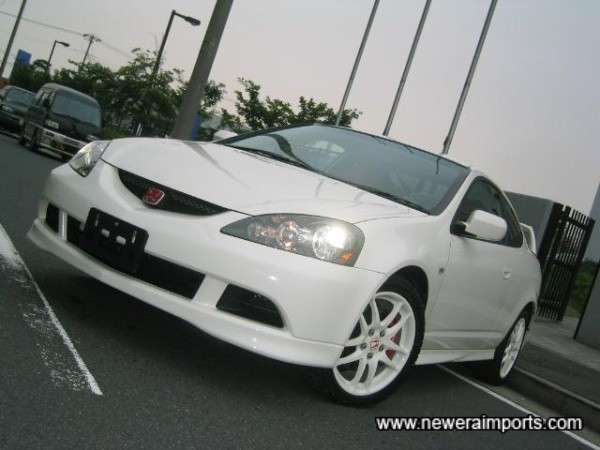 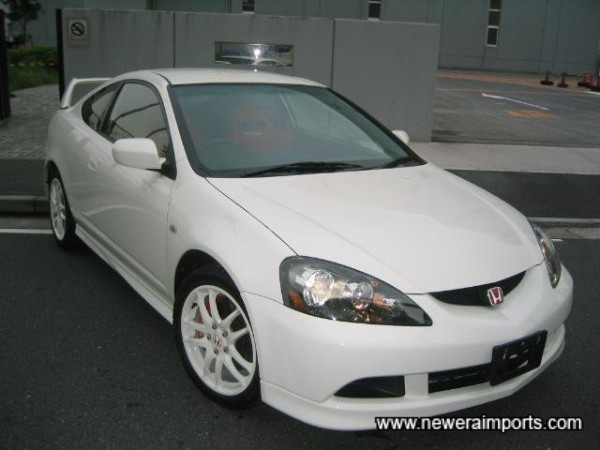 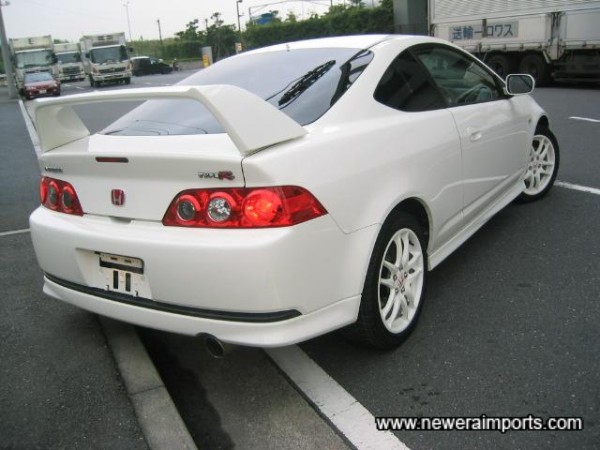 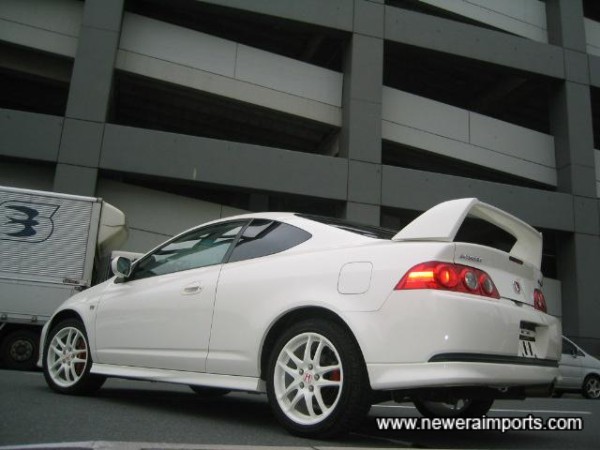 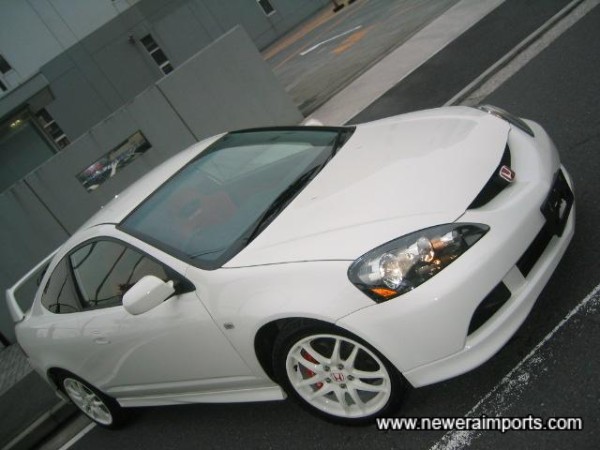 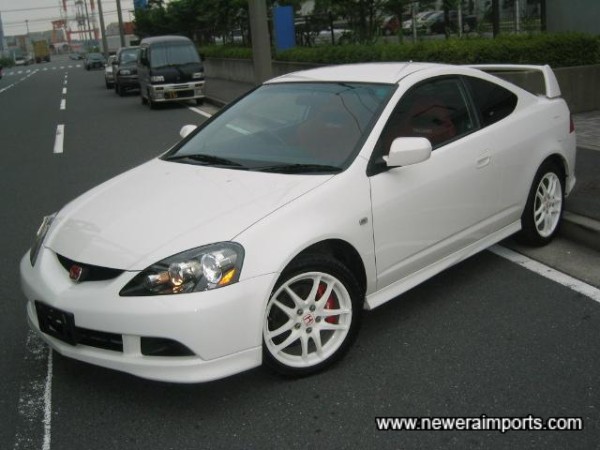 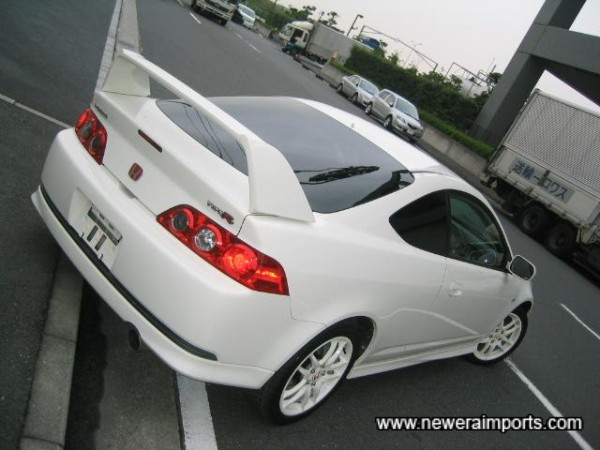 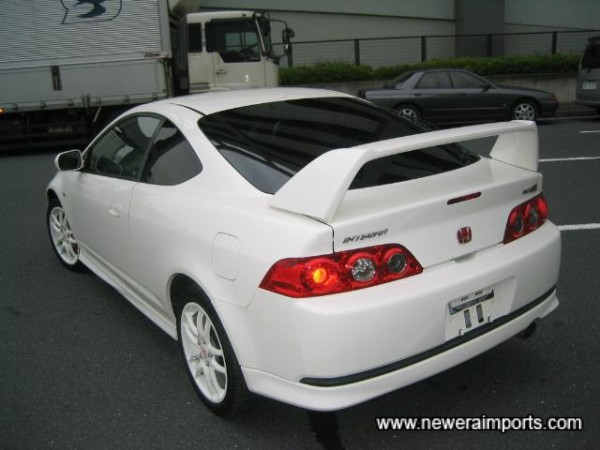 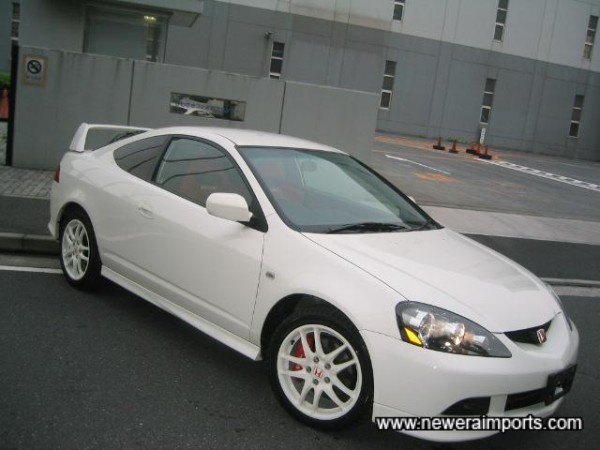 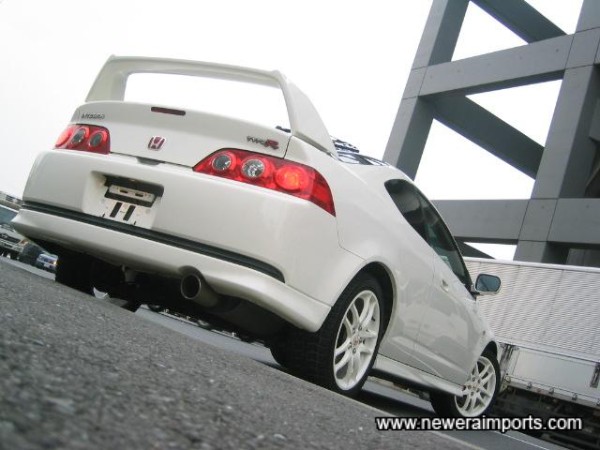 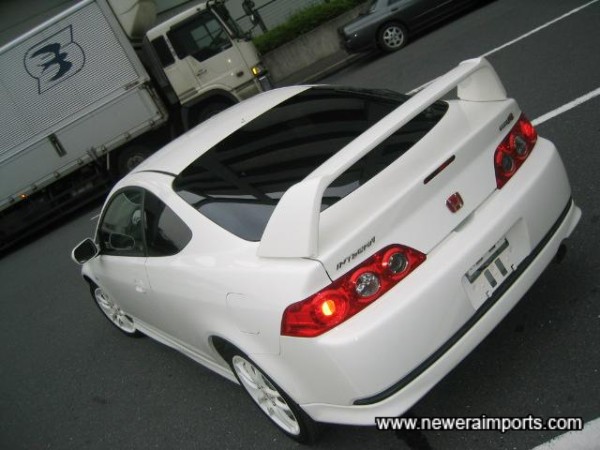 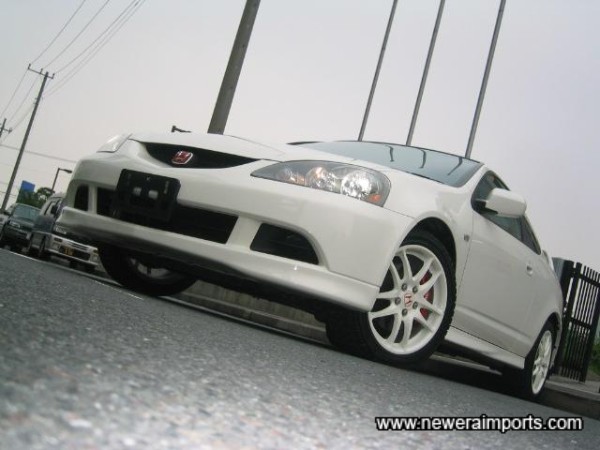 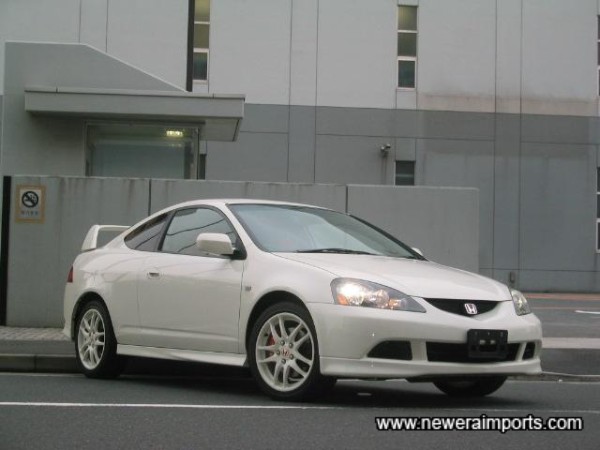 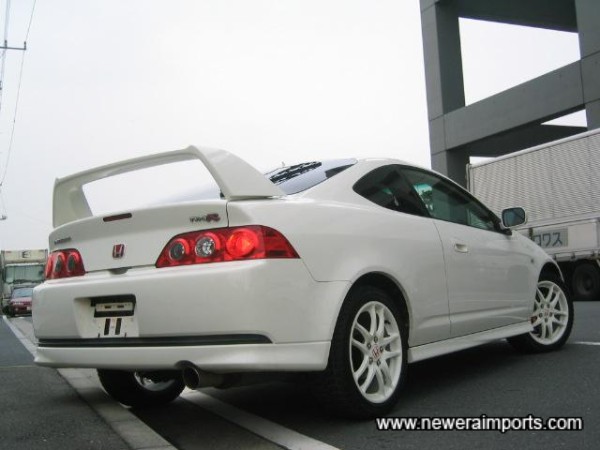 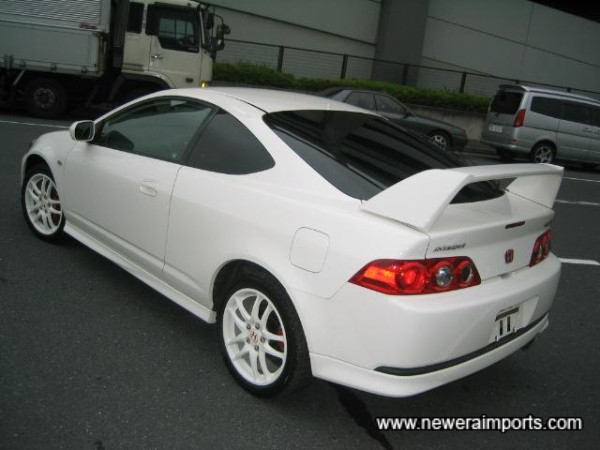 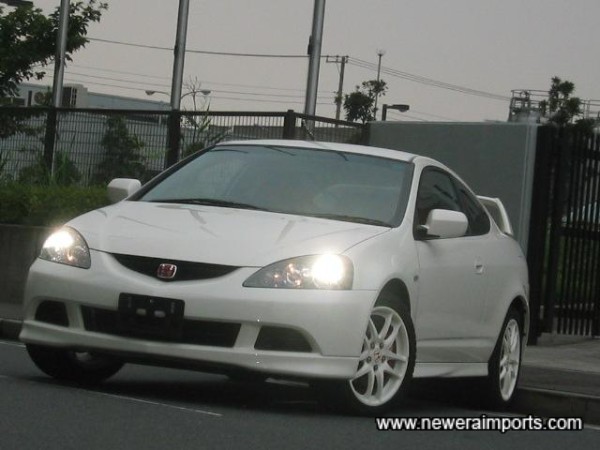 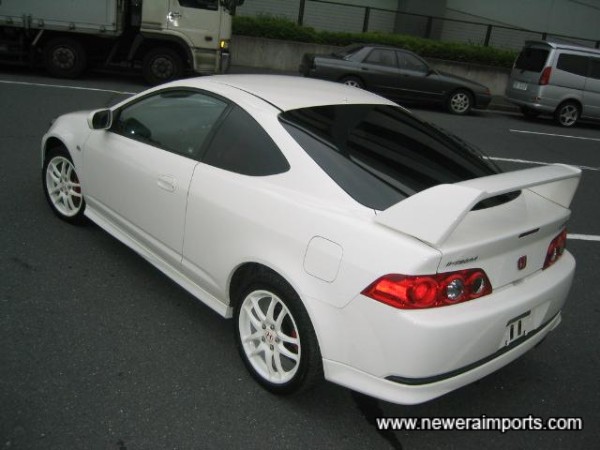 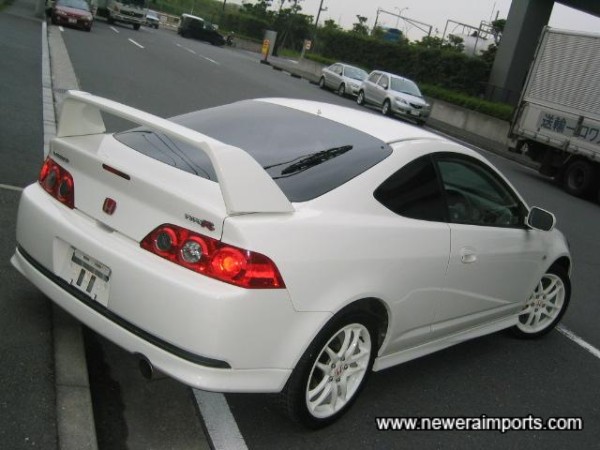 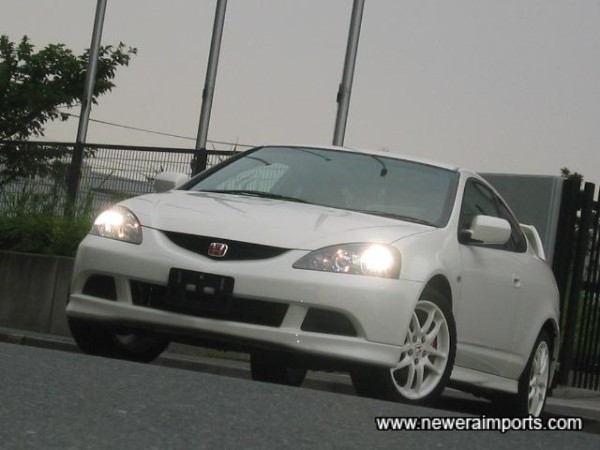 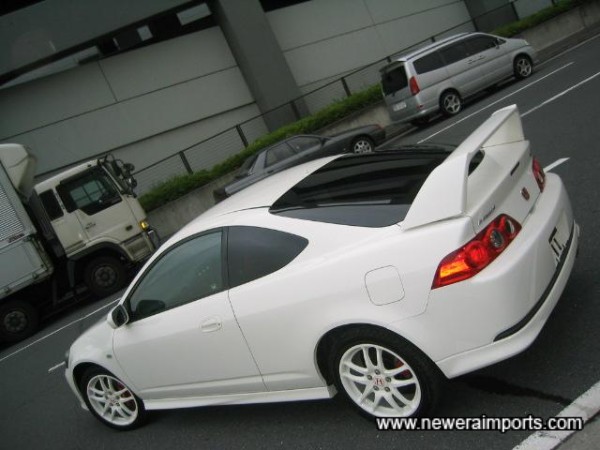 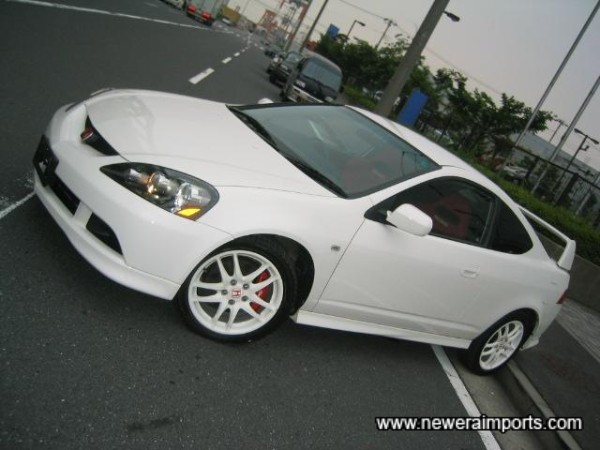 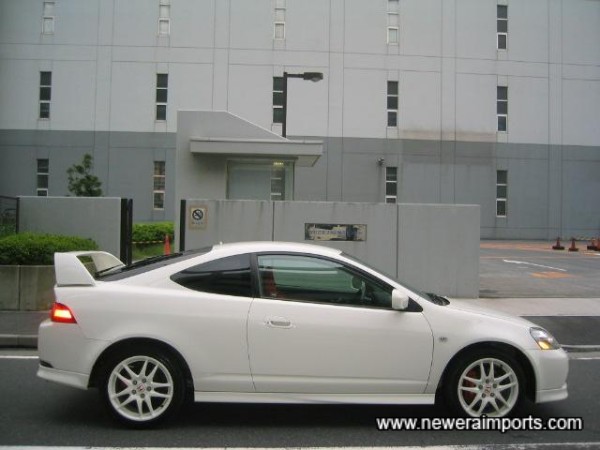 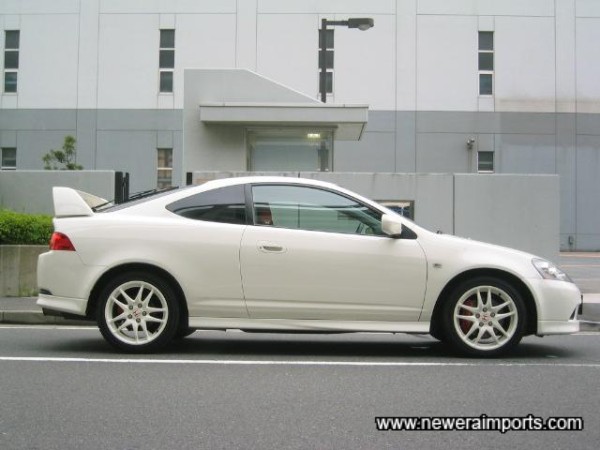 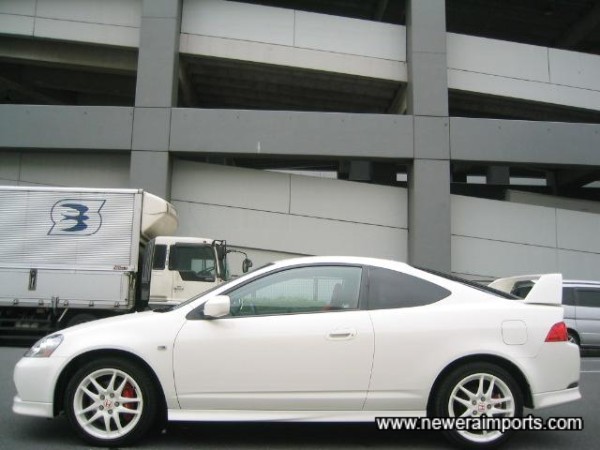 This 2006 Integra Type R is a sport coupe for drivers who want upscale sophistication and the very best hot hatch available. This is a virtually brand new car offered at an exclusive once only discount.
The sophistication in this package extends from the well-appointed cockpit to the superb driving dynamics. Honda's powerful iV-Tec twin-cam 220 bhp engine, perfectly controlled sports suspension chassis setup, and four-wheel Brembo equipped disc brakes make for a Supportive, Recaro contoured seats. These are deeply sculptured and supportive when cornering hard, with thigh, lumbar, and shoulder adjustments on the driver's side. A useable foldable back seat and expandable cargo space make it practical.
This is the latest facelift model (Introduced for Japan only - less than a year ago) which carries updated headlights (HID), restyled rear lights, a redesigned front nose and rear bumper. Interior remains unchanged, although all the instrumentation has been upgraded to white faced electro luminescent lighting as standard with the re-design of this model. It's also a very sought after original C Package DC5 Integra Type R - which is equipped with electric mirrors / retract mode, rear wiper and factory fitted rear privacy glass.
Considered by those in the know as the No 1. hot hatch available worldwide, this is the model that is making consistent gains and race wins in the current BTTC championship! Winning an array of industry awards, including being named to Car and Driver's "10 Best" and Ward's "10 Best Engines" lists. The Type R Integra offers the performance that enthusiasts demand for drivign satisfaction as well as economy when needed. In addition, the level of refinement makes it competitive with vehicles from the best Europe has to offer.Powered by advanced engines that feature i-VTEC "intelligent" valve-control systems, combining VTEC (Variable Valve Timing and Lift Electronic Control) with VTC (Variable Timing Control). The i-VTEC system delivers enhanced performance across a broad power band in addition to improved fuel economy and reduced exhaust emissions. The Type R's new engine has larger exhaust ports with dual manifolds combined with a fixed short-runner intake to provide high-rpm power without sacrificing stoplight punch and vehicle emissions. The 2.0-liter is also several pounds lighter than the 1.8 from previous Integra's. To deliver a race-bred driving experience, is equipped with a 16-valve, DOHC, 2.0-liter, four-cylinder engine. Using a high-flow intake manifold and exhaust system in combination with i-VTEC. It is equipped exclusively with a 6-speed close-ratio manual transmission with double and triple-cone synchronizers for precise, short-throws and ultra-positive shift feel. An ultra-lightweight forged chrome-molybdenum steel flywheel and Torque induction-type Helical Limited Slip Differential are installed.
This engine is the best of the V-Tec range. It is very refined and easy to drive low down in the rev range, unlike some of the earlier V-Tecs due to the improved low down torque, characteristic of this engine. Then once past 6000 RPM this engine changes note as the V-Tec comes 'on cam', accompanied by a kick in the back acceleration uncommon to naturally aspirated cars. Fitted with the latest i-VTec 220 bhp 2.0 engine from Honda, these are superb award winning engines. Honda being the pioneer of variable valve timing technology - knows better than any other manufacturer how to make an N/A sports engine to entertain yet still meet all the modern emissions standards and be 100% reliable. This engine really is superb in every respect providing ease of driveability, good fuel economy with unbelievably strong and intoxicating power from the 2.0 DOHC when required, all the way to the 8,400RPM red line. 0-62mph takes just over 6 seconds and standard spec gives a top speed of over 140mph.
Handling on the DC5 Integra is class beating in performance. Bending rigidity has been improved by 35% and torsional rigidity by 116% compared to the previous DC2 Integra Type-R. This is the No. 1 hatchback in Japan, where they consider Renault Clio's best offerings as nothing more than a cute little city runabout. The Japanese race the DC5 very competitively in a one make series and recently these have been taking No. 1 positions in the UK BTTC championships. Make no mistake - this is the best hot hatch currently in production and is ONLY available as an import in the UK.

The car is of auction grade 5 .... DC5's imported from Japan don't get any better than this in terms of condition.
It's absolutely as new completely original throughout and interior is also in excellent original condition with no bodywork faults to report at all - not even the tiniest stone chip!

Integra Type R's have always been popular performance cars in Japan holding their prices well and the DC5 continues to be a No. 1 choice with enthusiasts in Japan for good reason. With Honda engineering, it's a very reliable package indeed, comprising a delightful direct close ratio 6 speed gearbox, handling braking that puts other so called "hot hatches" into the weeds! These Integras corner as if they're on proverbial rails. The stiff set-up makes the Integra Type-R turn in sharply with barely any roll. It can be thrown into corners at speeds you'd never expect, with total control and predictable handling.

Now with the ever increasing fuel prices in the UK, it makes more sense than ever to have a Type R iV-Tec and more so - a Japanese built Intergra which is unique, rather than a UK built V-Tec Civic (Which the Japanese don't rate anywhere near as highly - due to lesser specification and handling).
With the DC5 Integra, there's economy when you want it class beating performance and handling when the open road beckons. To us, this is also one of the most beautiful coupes currently in production. Understated, subtle and purposeful in apperance, yet practical and endowed with Honda Type R performance and reliability. DC5's are destined to grow in popularity in the UK. The real benefits of V-Tec are yet to be fully realised by many, but will be seen by road users watching the rear end of this example dissapear into the distance!

With facelift models only just released, this is an extremely exclusive and beautiful Sports Car - In this example's case made more attractive by the fact it can be registered as a brand new car in UK - so it has the latest registration mark, after being E-SVA tested.

Including 12 months comprehensive Motorcare warranty and full valeting
Viewing and tst drive are strongly recommended! A deposit of £1,000 secures. Please Contact Us for details on ho to reserve this brand new Type R.

Newera - Consistently recommended by Integra Type R club members and tuners in the UK - for supplying the best hand-picked DC5's to order and from stock!