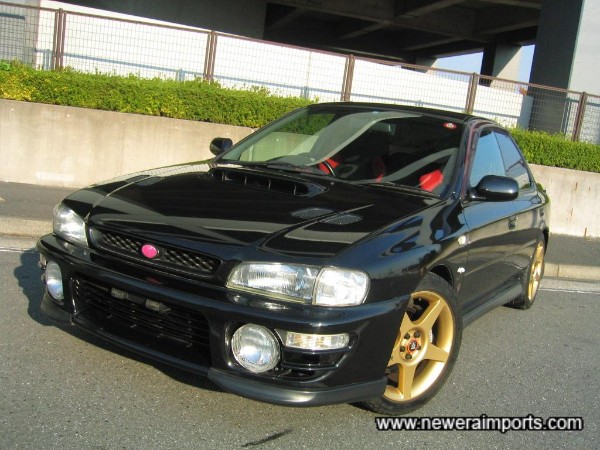 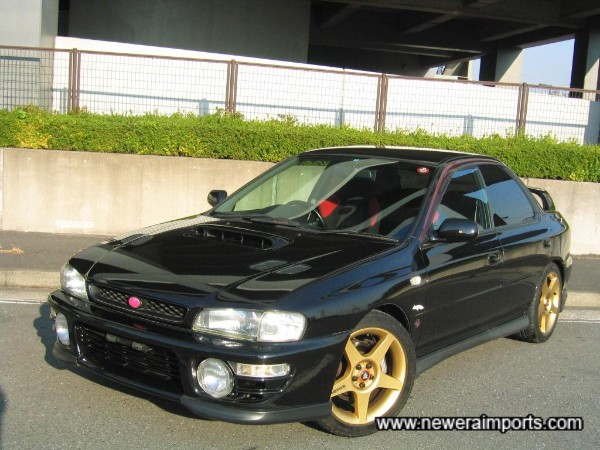 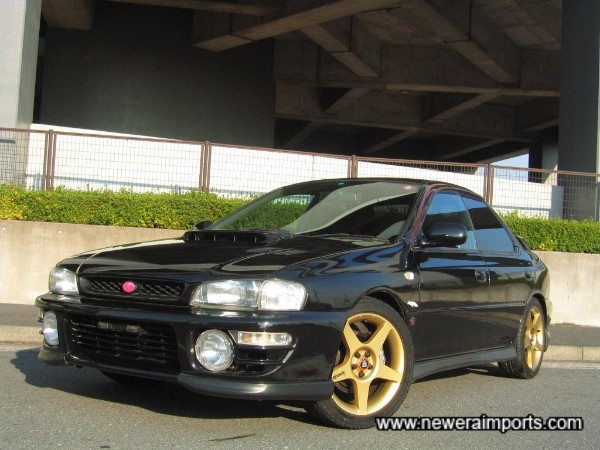 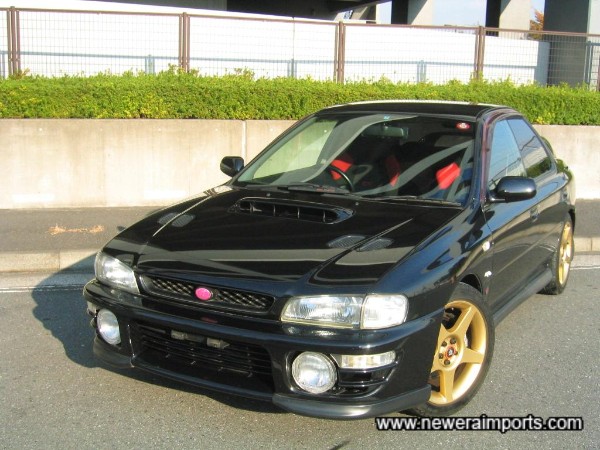 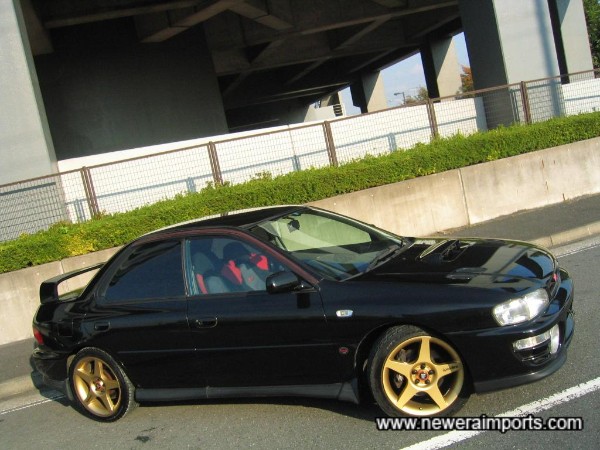 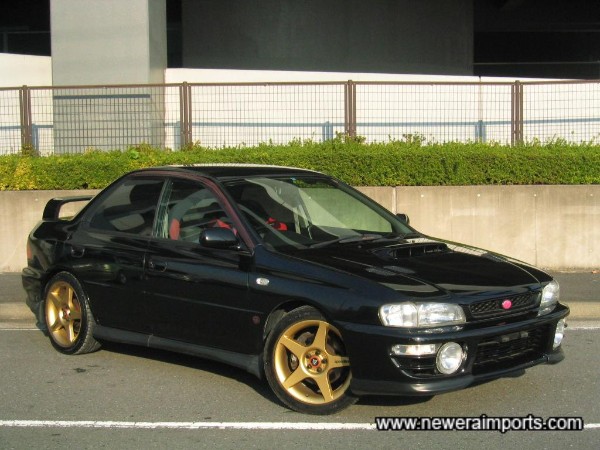 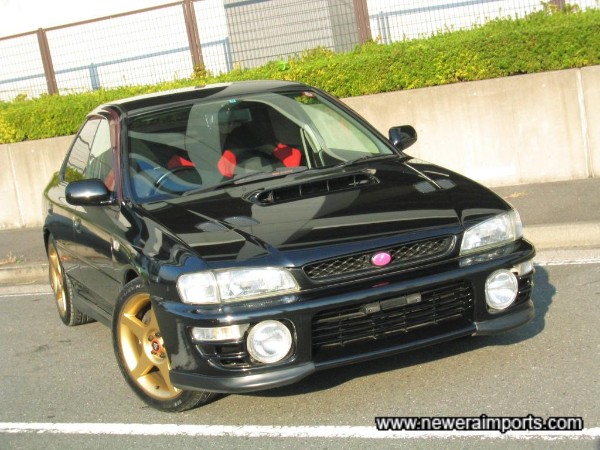 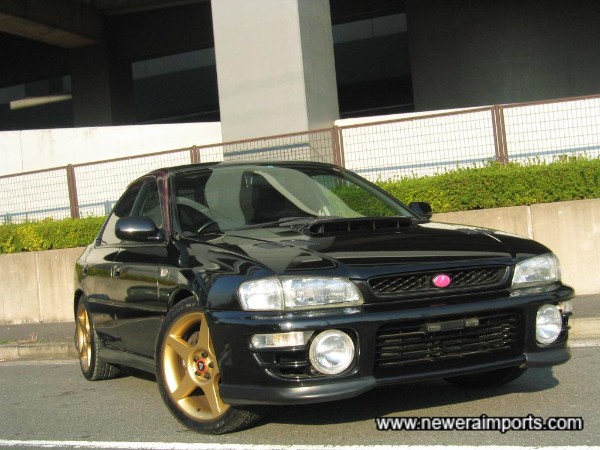 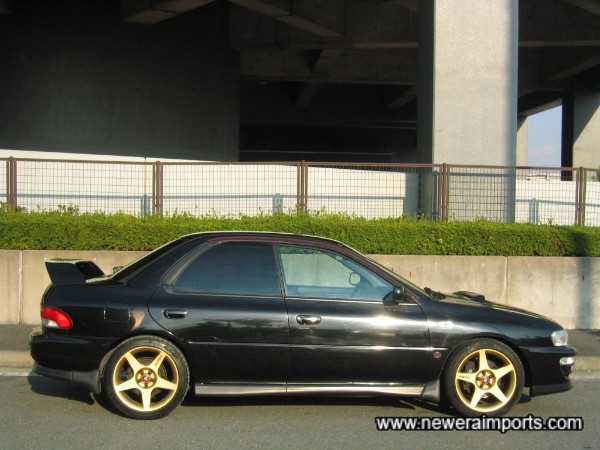 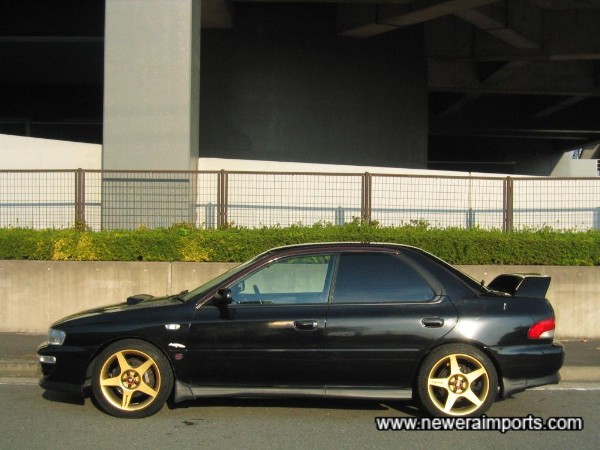 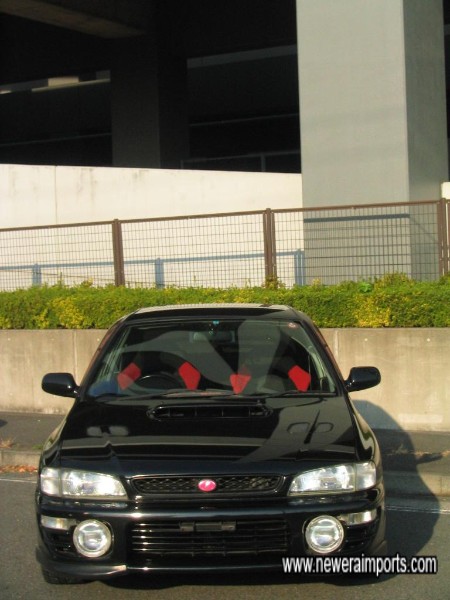 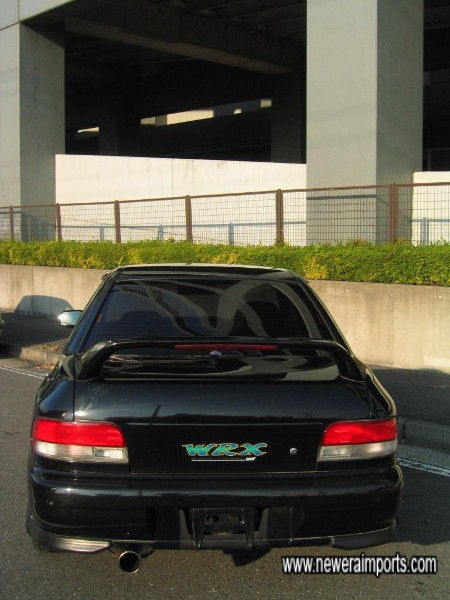 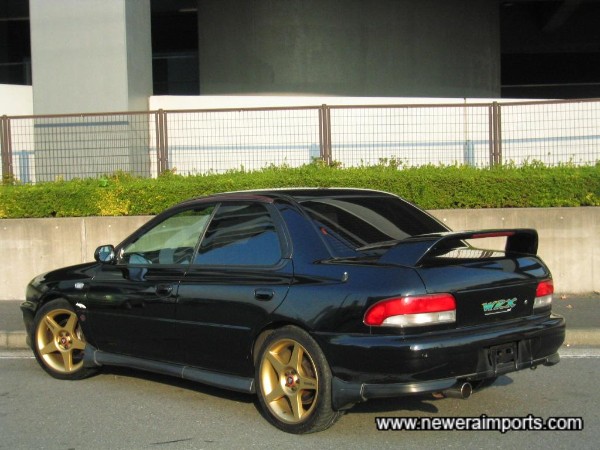 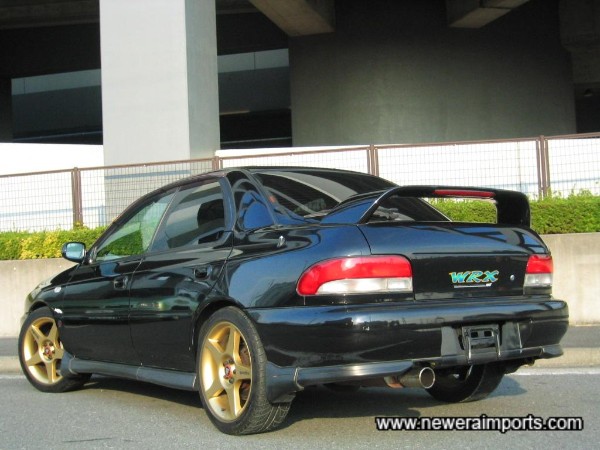 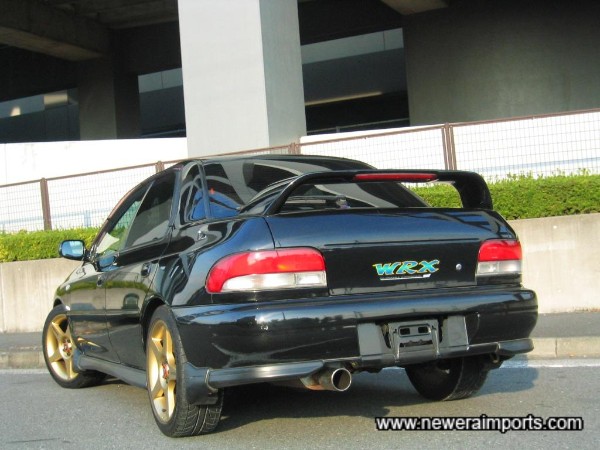 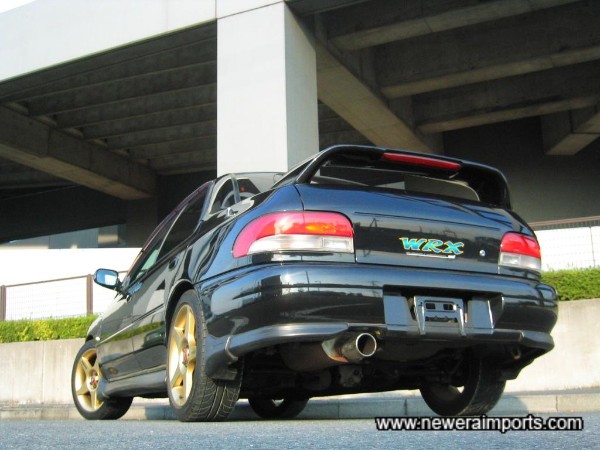 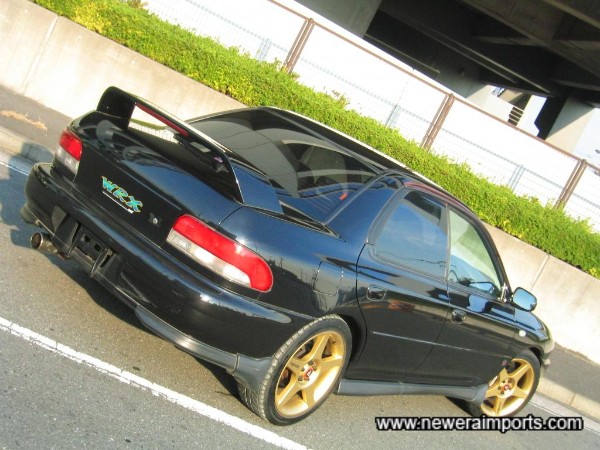 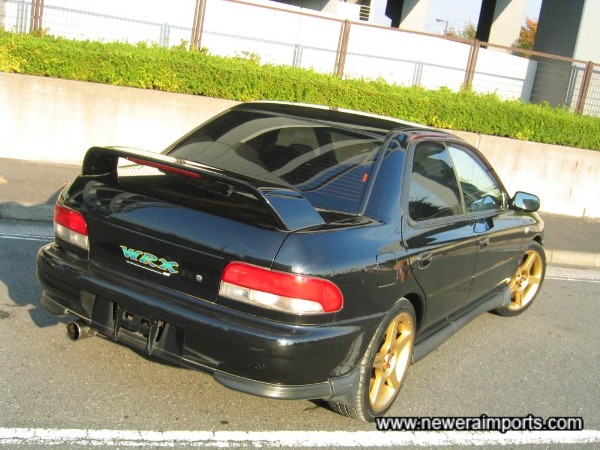 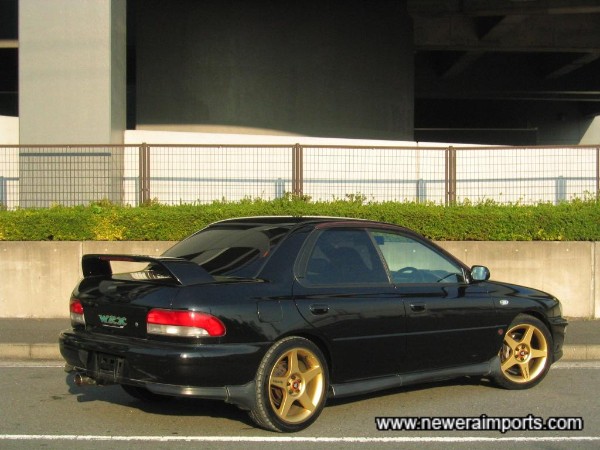 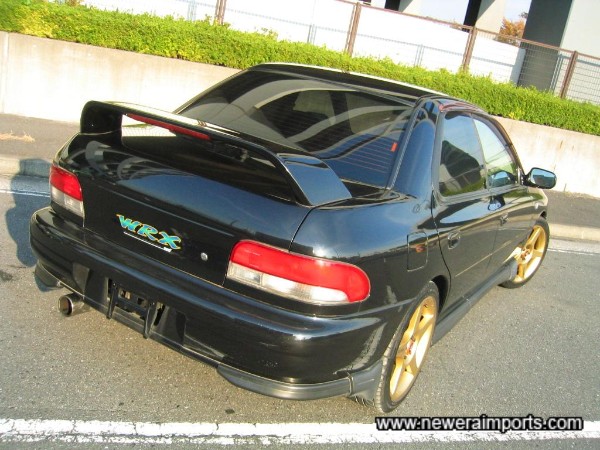 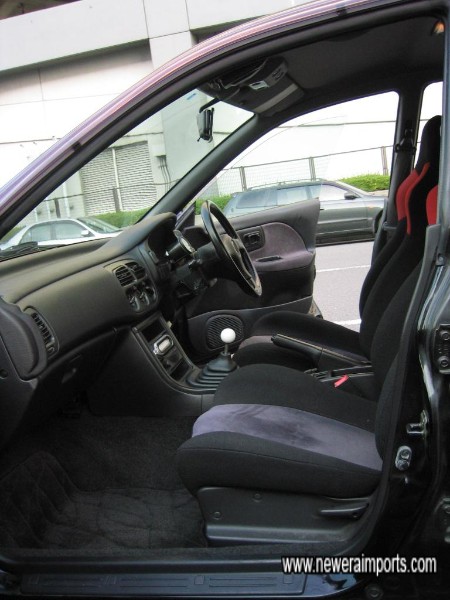 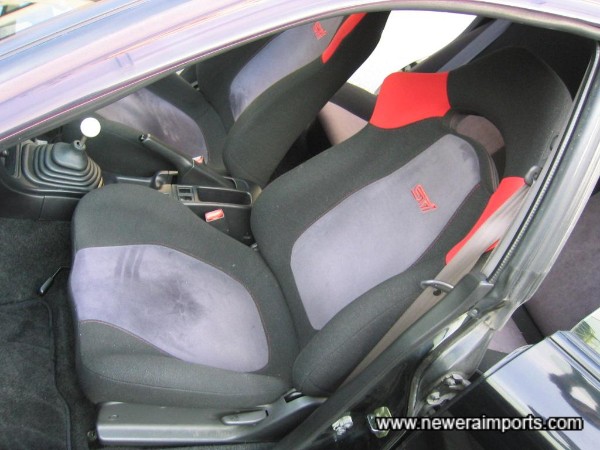 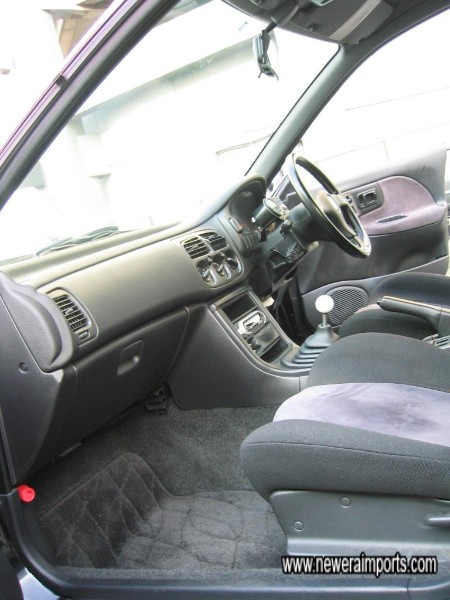 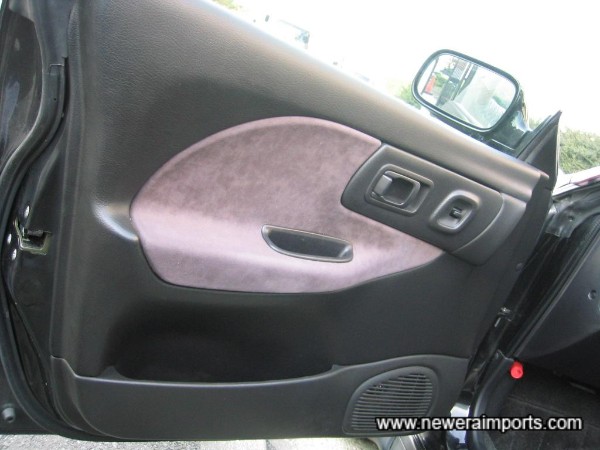 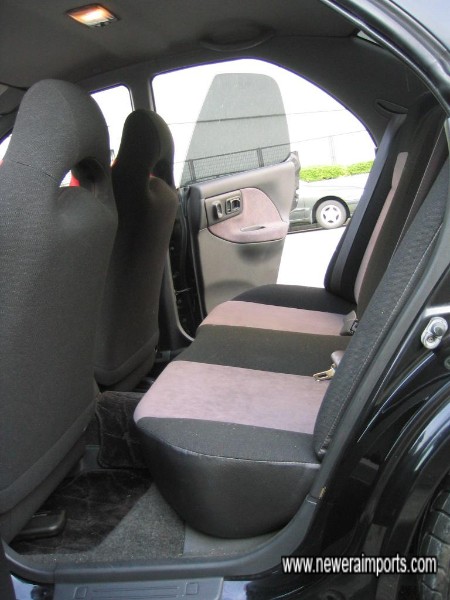 
The STi Version 3 is one of the most interesting and capable of the classic model 4 door Imprezas - which was only built for the Japanese domestic market officially. It was on the STi Version 3 that Subaru chose to introduce 4 piston signature front brake calipers with 2 piston rear callipers to match. The STi 2 and 3 models also carried the largest turbo of this range which was the same unit as fitted to the rare 22B variants. The engines are Sti Blueprinted units with stronger internals and an 8,000 rpm rev limit (Normal WRX's are 7,000) packing 280+ bhp as standard. The STi 3 is also distinguishable by it's updated vented bonnet, light green tint on windows, updated rear spoiler with integrated central brake light and the red and white rear lights. The Sti 3 interior was also of a brighter design than previous versions, with embossed front seats, blue faced dials and Nardi steering wheel. Further mechanical improvements from Subaru Technica International include a carbon fibre front strut brace, uprated intercooler, full Sti Exhaust. Optional side wind-deflectors are also fitted and this car is also equipped with the expensive original option 3 channel ABS system.
After market additional items: Wheels are 17" Speedline Corse 2013C forged alloy construction for light weight and strength. Tyres are Bridgestone Potenza RE-01's of size 215/45-ZR17 (Half worn). Suspension has been uprated with Bilstein gas dampers and progressive uprated springs. These are better controlled than standard, but still compliant and well suited for UK roads. Mechanically the car remains standard. There's cosmetic improvement with clear side and front repeaters. Also, STi models don't usually have fitted driving lights in the front bumper (Only WRX's for some reason!) but this example also has these. Inside, turbo boost can be monitored with the Greddy electronic gauge, located with a carbon fibre mount on the steering column. There's also a Greddy turbo timer - to allow the car to cool and so help preserve the turbo. Audio is a Sony MD/Radio with security removable face, column mounted remote control and a Sony 10 disc CD changer in the boot (Cassette has not arrived from previous owner at the time of writing this report). There are also uprated speakers fitted. Note that all audio equipment is supplied free of charge with this car.
Auction grade is 4 (Auction sheet is available). Condition is mostly outstanding - with only minor faults to report. There's some minor pin dents on both nearside doors. On the rear bumper o/s corner there's some marks where the car's nudged concrete. As part of full pin dents will be removed by a dent specialist and the rear bumper professionally repainted. Of course the bodywork will be fully polished during our full valetting service also. Note this has been a non smoker's car.
Test Drive: Mechanically it's also in perfect condition. Strong power with good response, a nice quiet engine with no noisy valve gear or signs of a hard pushed engine. Note the intercooler fins are all mostly intact - a sign it's been driven gently most of it's life. Brake discs usually suffer from heavy wear on Imprezas - if driven hard for most of their lives. This example's discs are visually in very unworn condition. We test drove this car for 3km after warming up - which revealed a very tight feeling car. Over a bumpy road there were no rattles or squeaks. Clutch has plenty of life left and brakes feel strong and disc-warp free (Another usual fault on Scoobies - but not on this one!). There are clear signs this car's been well cared for and regularly serviced. Oil has also recently been changed.
Since April 2004, a model report has been required when SVA testing any car of newer manufacture than 10 years of age at first registration in UK. Although there are model reports for Sti 7 8 models, there are none available for the classic STi Imprezas. This mean that only pre 10 year old 1997 Imprezas can currently be imported to the UK. As most pre 1997 Imprezas in Japan are too tired nowadays, or just too expensive if in top condition and low mileage - we are usually unable to supply these. We simply won't buy a car that doesn't meet our exacting standards.
A very rare spec Impreza in excellent condition. Inclusive of full SVA conversions, SVA test, new MOT, Paintwork as described, Road Tax, Registration, 12 month's comprehensive warranty and a full valet just before collection, this car is priced at £7,650 OTR. If you'd prefer it without minor pin dent and rear bumper repairs, price is: £7,350. Alternatively, bearing in mind no SVA is required on this car for UK registration, only a simple MOT which it'll pass without any problem - we can offer this car without UK preparation and registration, at just: £6,250.
A deposit of £1,000 secures this car for prompt shipment. Please contact us for full information on how to reserve this Sti Version 3.
Don't wait - Once it's gone we'll probably take another 3-4 months to find another this good for stock!
Newera - Recommended widely by Forum members, UK tuners and Magazines as the no. 1 supplier of the best quality imported cars. Now also supplying ALL performance parts.