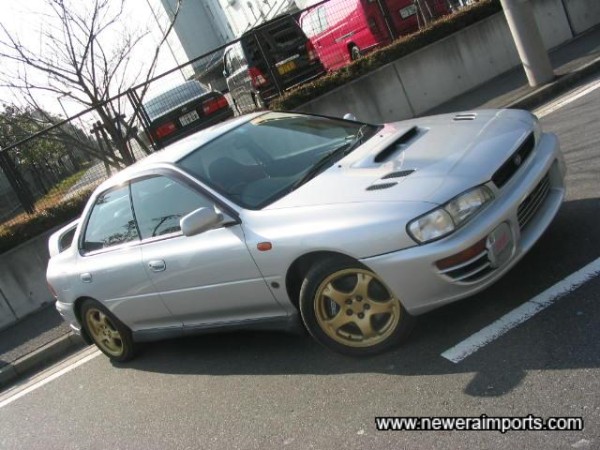 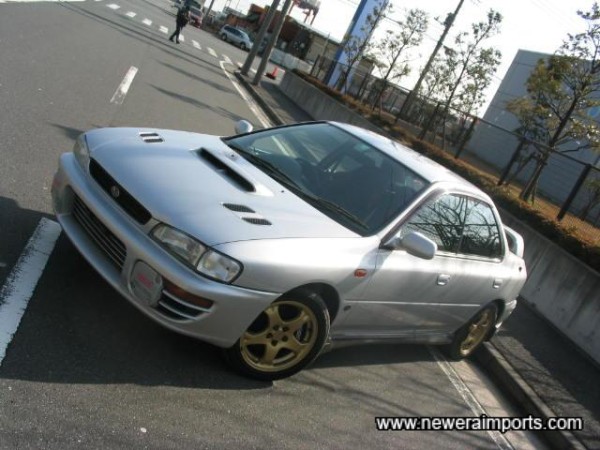 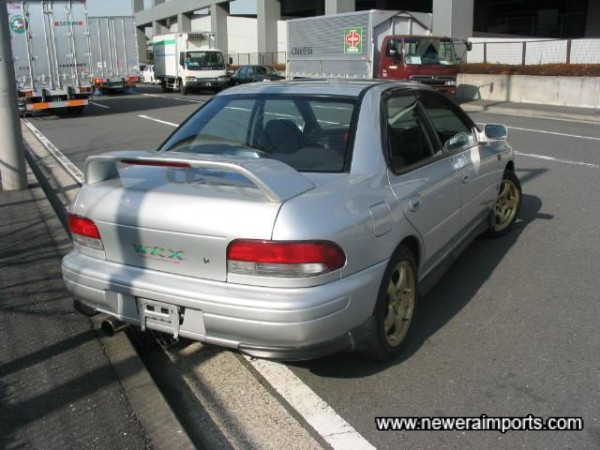 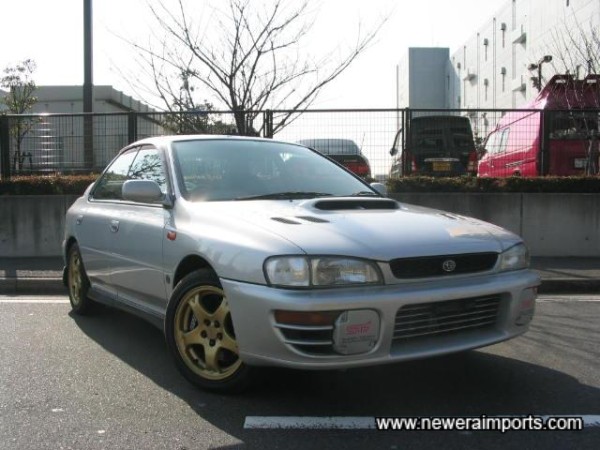 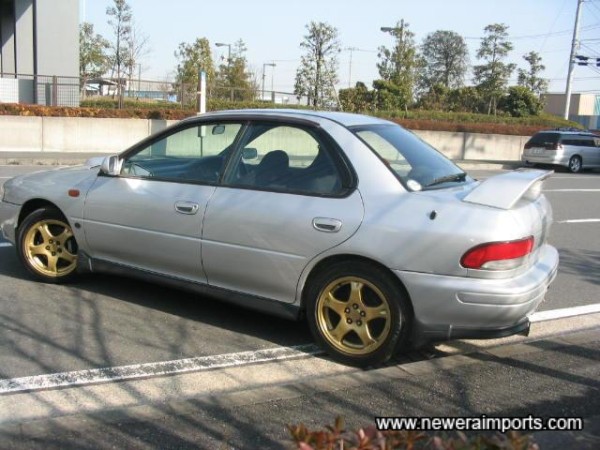 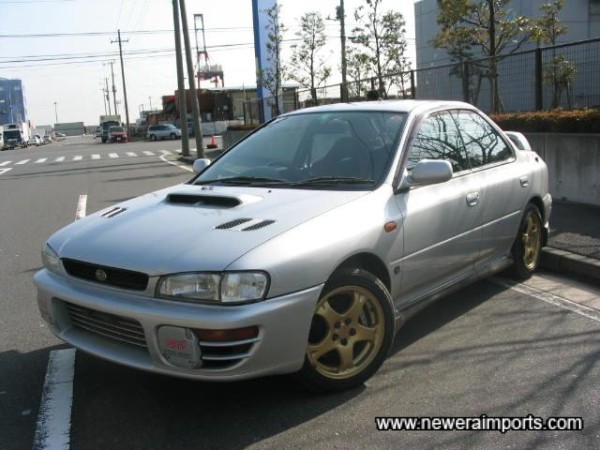 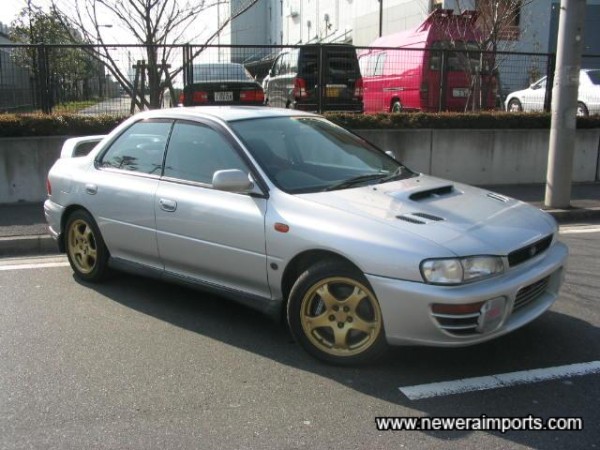 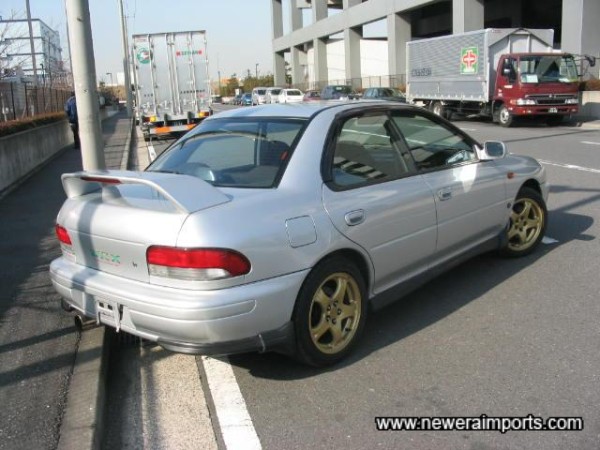 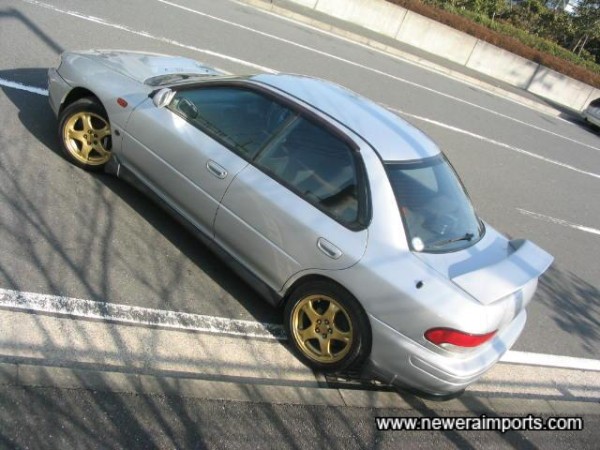 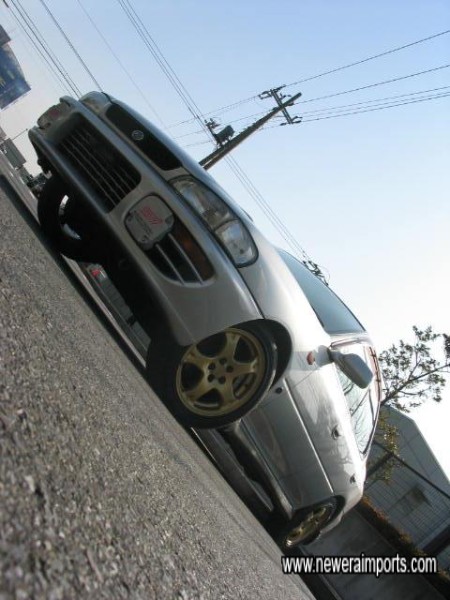 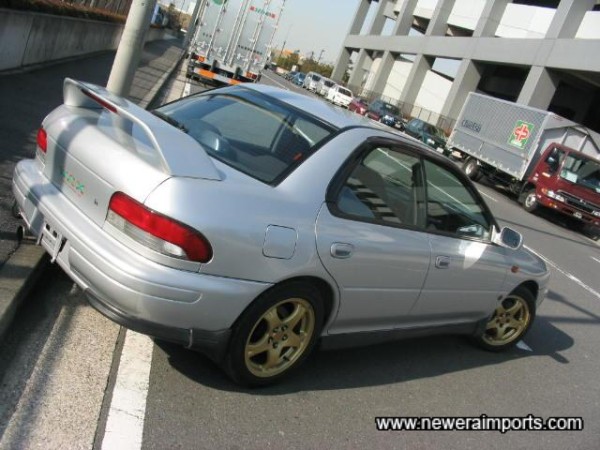 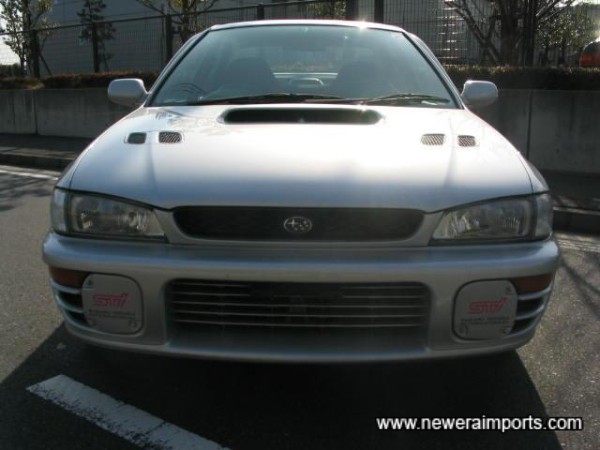 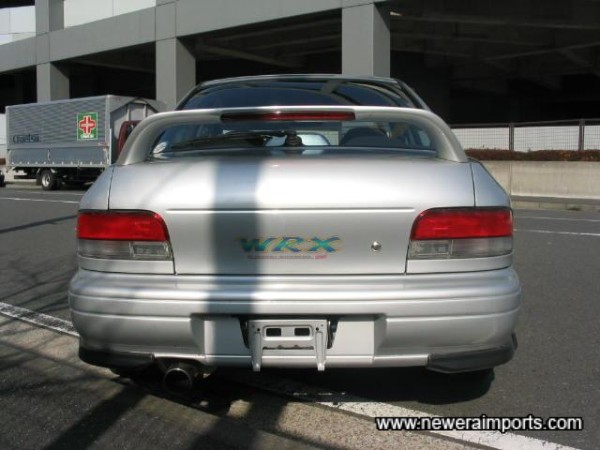 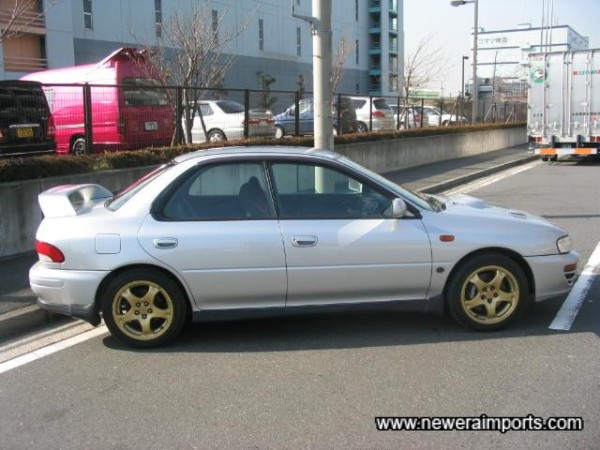 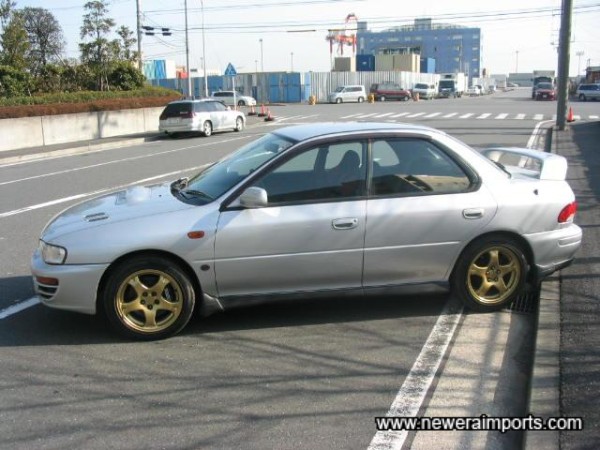 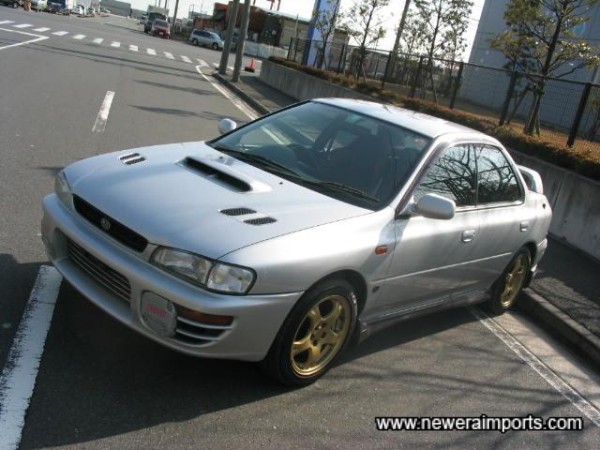 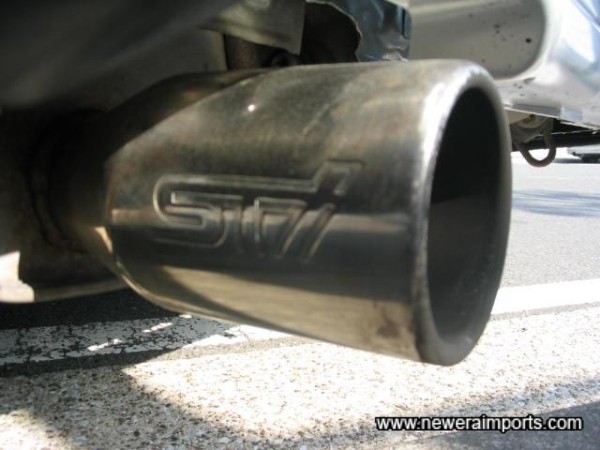 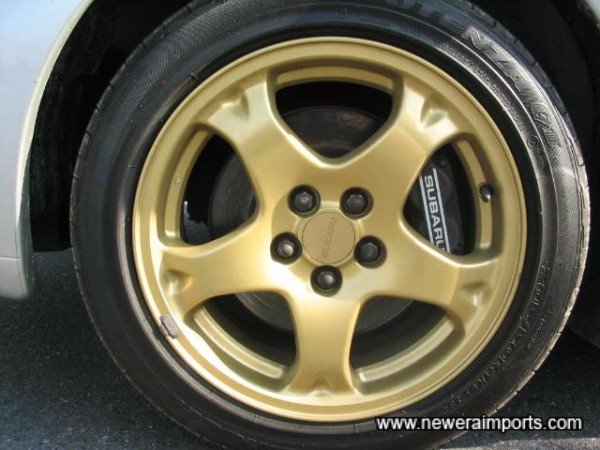 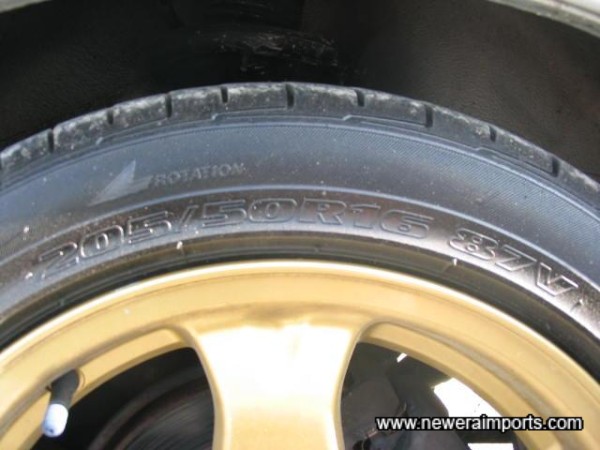 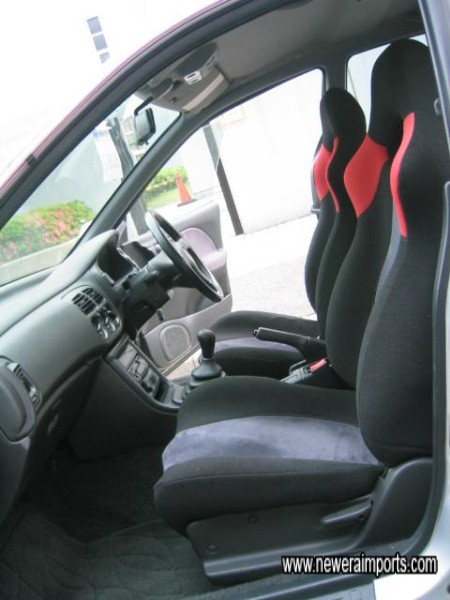 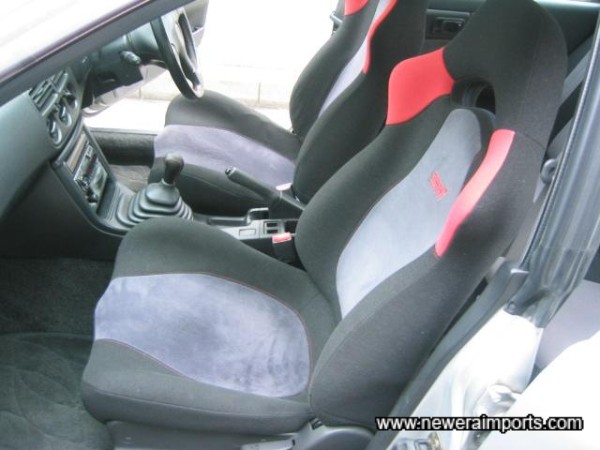 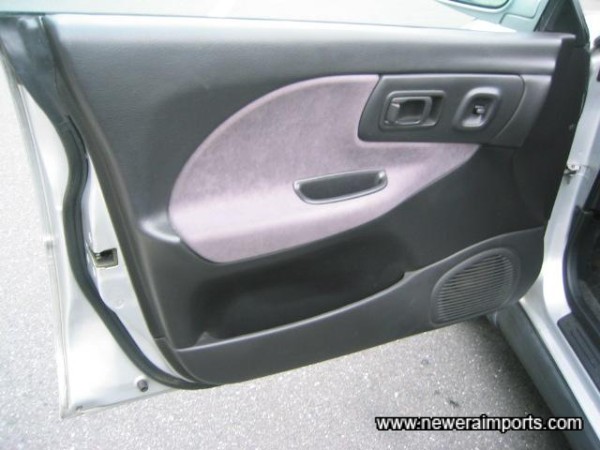 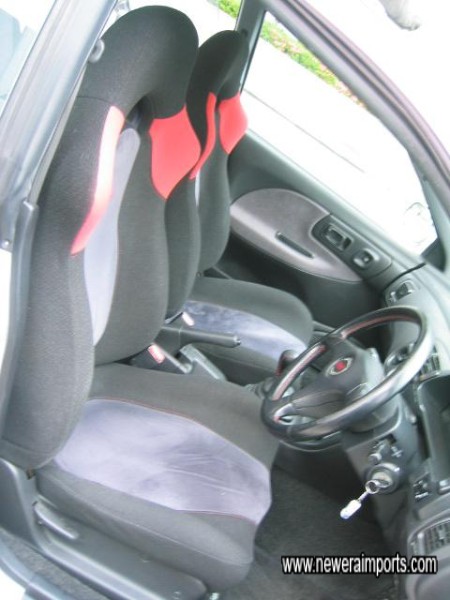 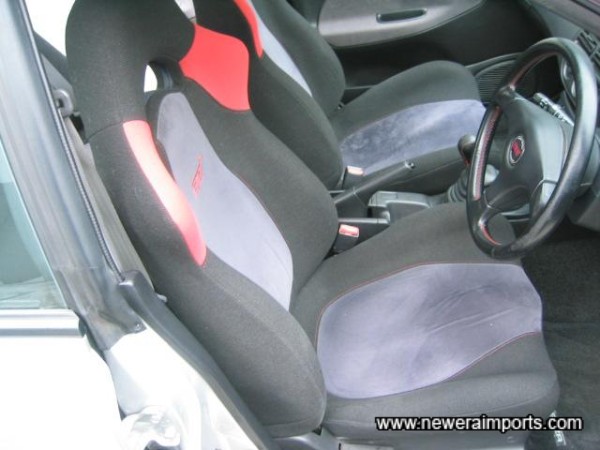 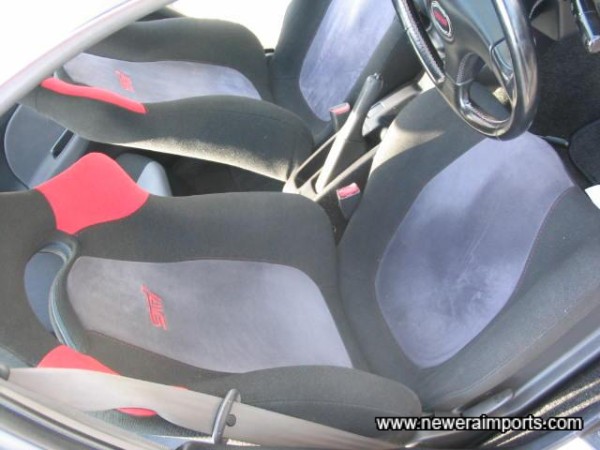 
The STi Version 3 is one of the most interesting and capable of the previous model 4 door Imprezas. It was on the STi Version 3 that Subaru chose to introduce 4 piston signature front brake calipers. The STi 2 and 3 models also carried the largest turbo of this range which was the same unit as fitted to the rare 22B variants. The engines are Sti Blueprinted units with stronger internals and an 8,000 rpm rev limit (Normal WRX's are 7,000) packing 280+ bhp. The STi 3 is also distinguishable by it's updated vented bonnet, light blue tint on windows, updated gold alloy wheels (Same design was used all the way to 1999) and the red and white rear lights. The Sti 3 interior was also of a brighter design than previous versions, with embossed front seats, carbon facia around the dials and Nardi steering wheel.
Further mechanical improvements from Subaru included Sti uprated suspension, Sti carbon fibre front strut brace, uprated intercooler, full Sti Exhaust and updated alloy wheels, of gold design to show this is a genuine Sti model.
This example is also fitted with original option side wind-deflectors. Hifi is a Kenwood CD/Cassette/tuner unit and there's a CD Changer in a box in the boot also. Audio is supplied free of charge. Original fitted mats are also included.
Since April 2004, a model report has been required when SVA testing any car of newer manufacture than Jan 1997. Although there are model reports for Sti 7 8 models, there are none available for the classic STi Imprezas. This mean that only pre-1997 Imprezas can be importd to the UK. As most pre 1997 Imprezas in Japan are too tired nowadays, or just too expensive if in top condition and low mileage - we are usually unable to supply these. We simply won't buy a car that doesn't meet our exacting standards.
www.neweraparts.com Mechanically it's also in perfect condition. Brake discs usually suffer from heavy wear on Imprezas - if driven hard for most of their lives. This example's discs are visually in very unworn condition. We test drove this car for 3km after warming up - which revealed a very tight feeling car. Over a bumpy road there were no rattles or squeaks. Clutch has plenty of life left and brakes feel strong and disc-warp free (Another usual fault on Scoobies - but not on this one!). Performance is also strong and healthy. Clearly this feels like a car that hasn't been used hard and has been well maintained. Note that tyres are each about half worn. Auction grade is 3.5 (Auction sheet is available). There is a small scratch on the n/s/r arch and 2 tiny pin dents on the n/s/r door. Also, there's a similarly tiny pin dent on each front wing and 2 pin dents on the driver's door. These will each be invisibly and professionaly removed - to presnr this car to our usual standards of excellence!
Late 1996 was when the Sti 3 was first manufactured. This Sti Version 3 is an outstanding example in unmarked and original condition. It is the latest model of classic Impreza that can still be imported to the UK at present! A very rare spec Impreza in excellent condition. Inclusive of full SVA conversions, SVA test, new MOT, Paintwork as described, Road Tax, Registration, 12 month's Quality Motorcare Warranty and a full valet just before collection, this car is priced at £7,835 ct us for full information on how to reserve this Sti Version 3.
Don't wait - Once it's gone we'll probably take another 3-4 months to find another this good for stock!