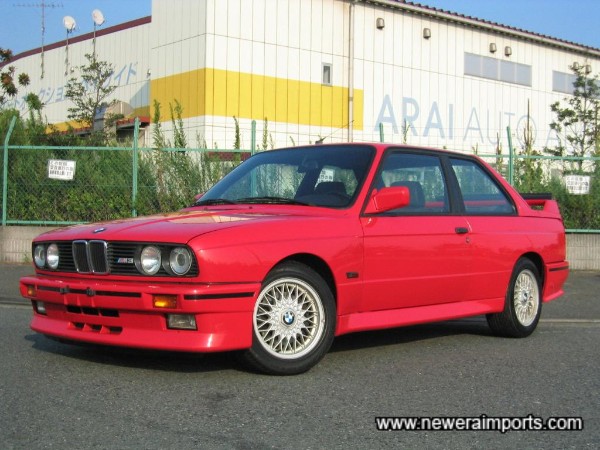 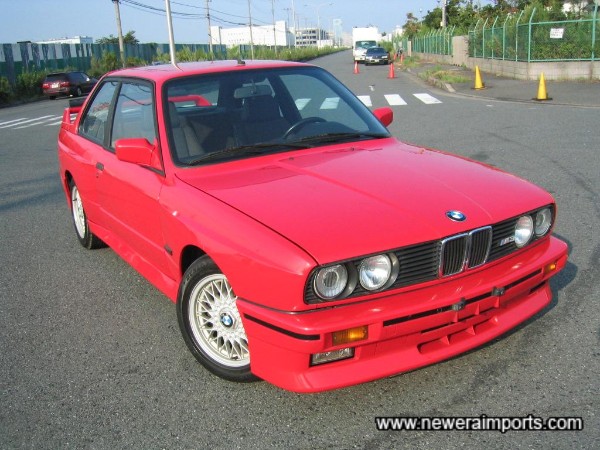 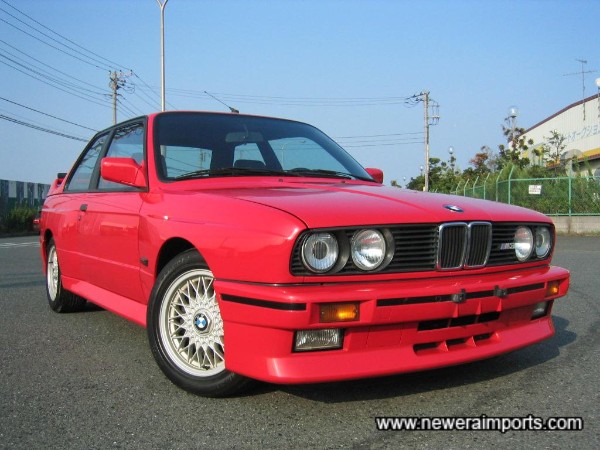 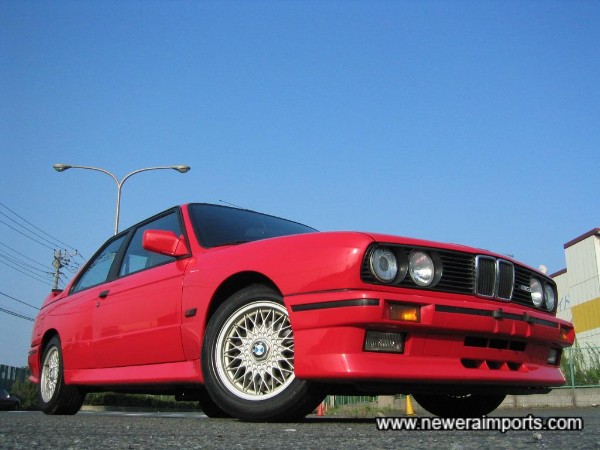 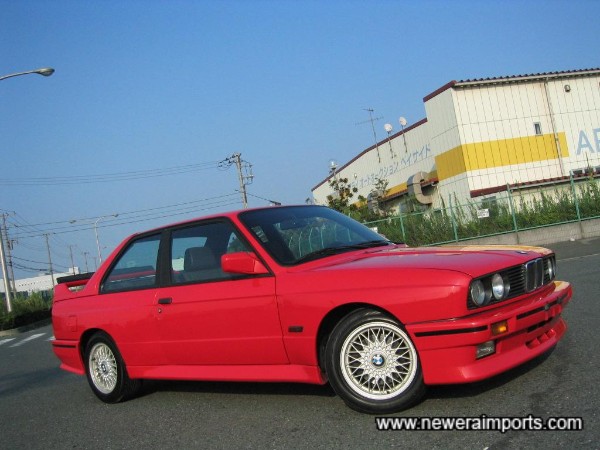 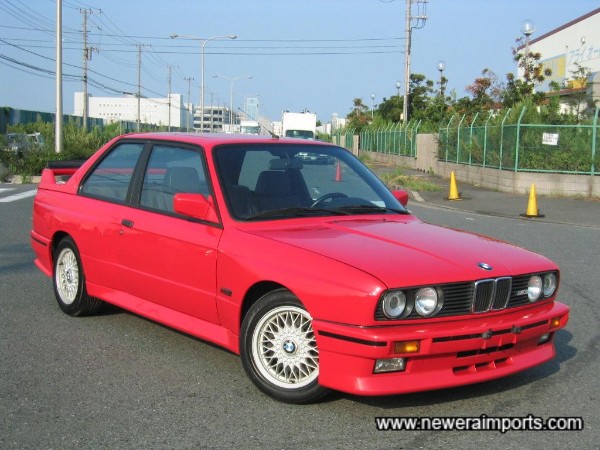 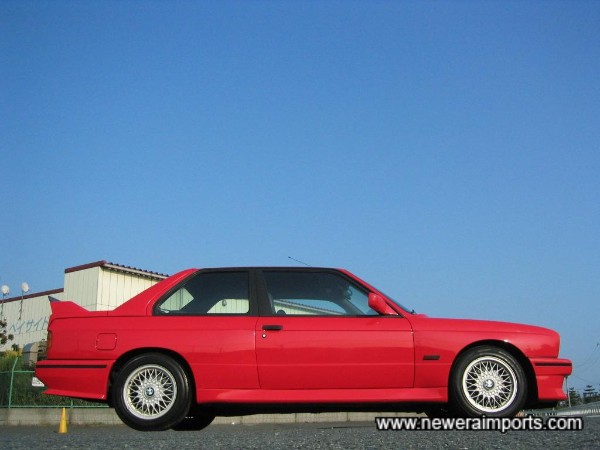 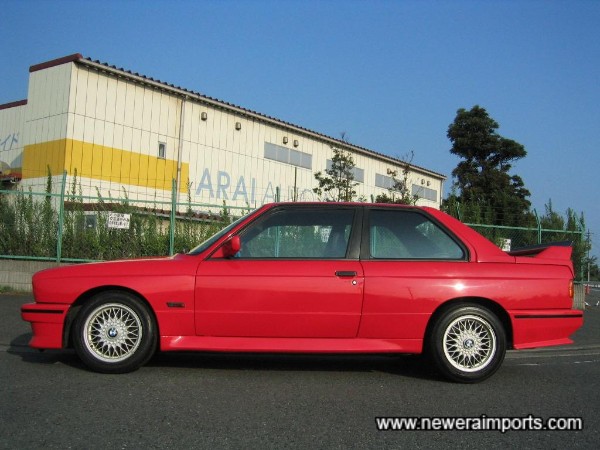 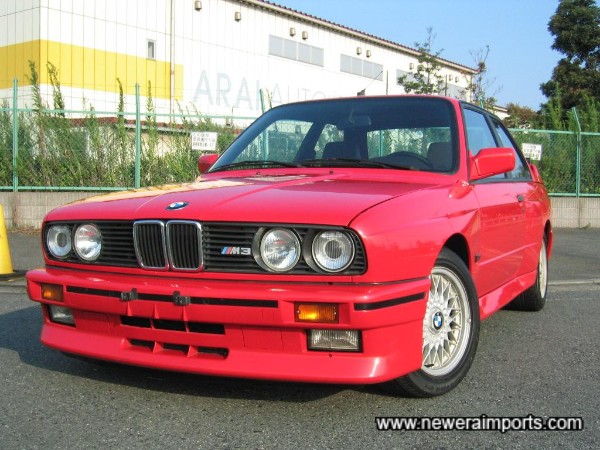 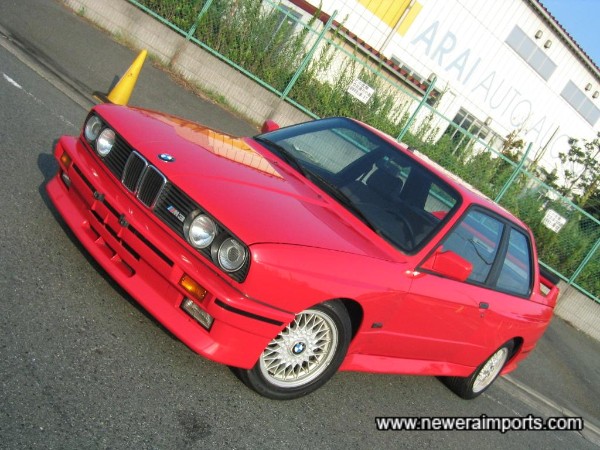 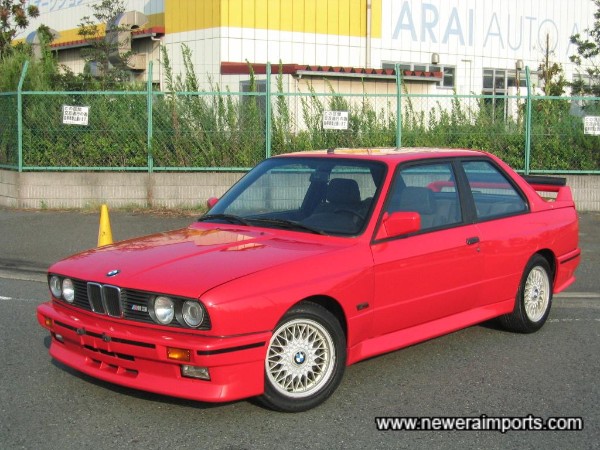 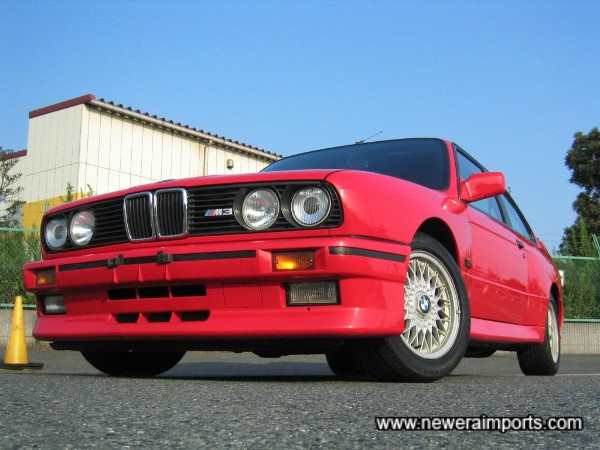 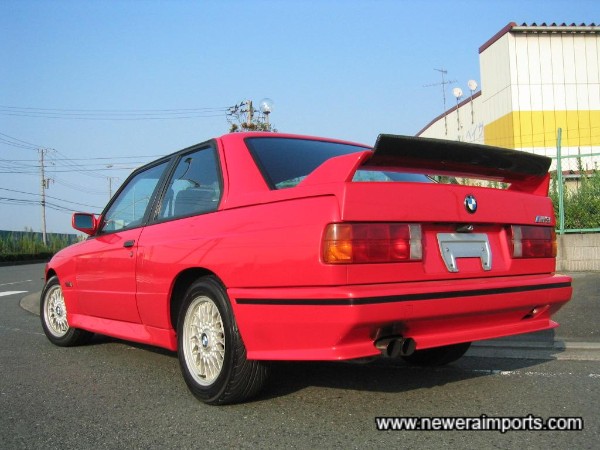 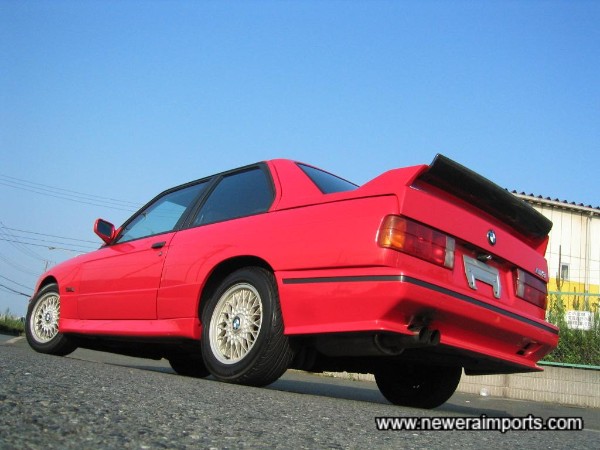 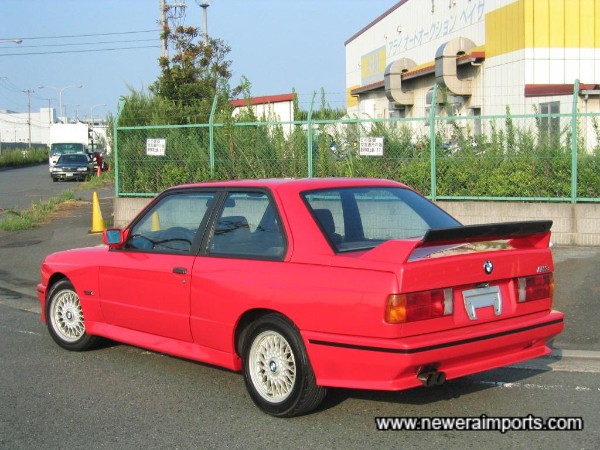 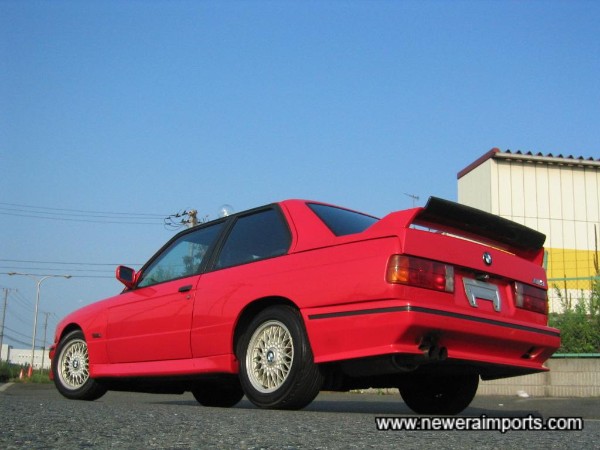 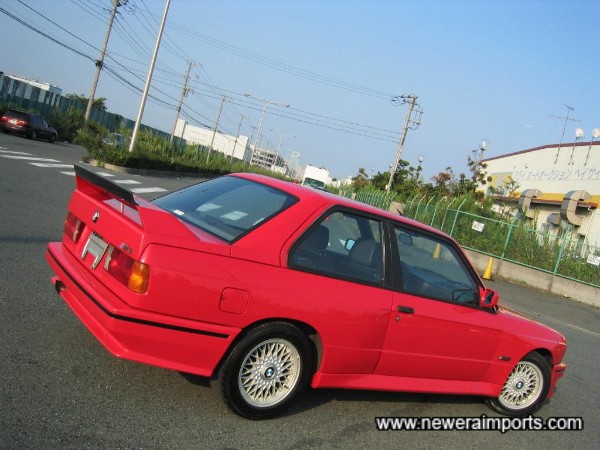 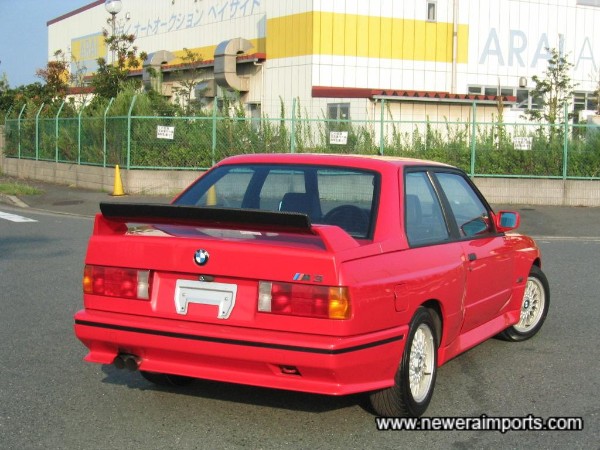 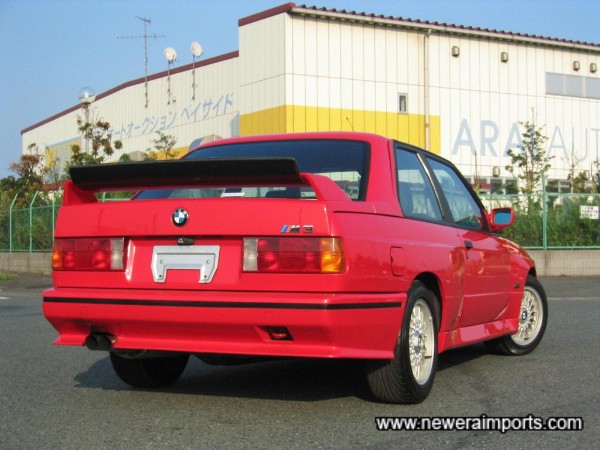 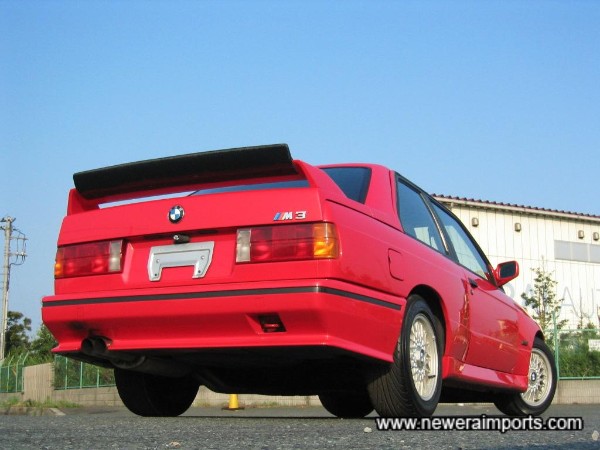 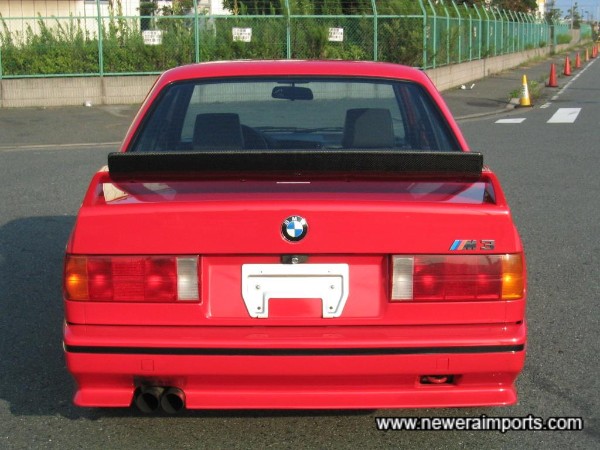 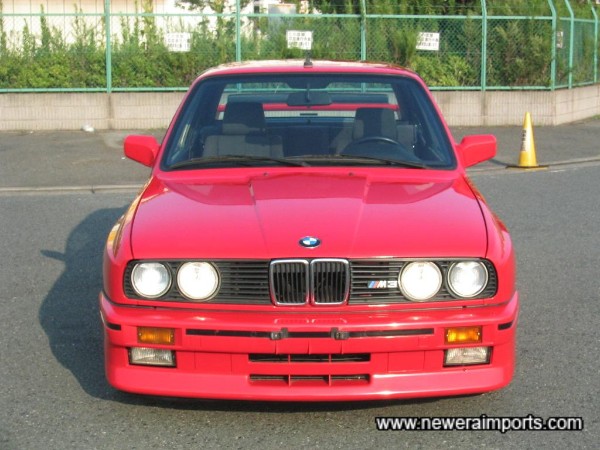 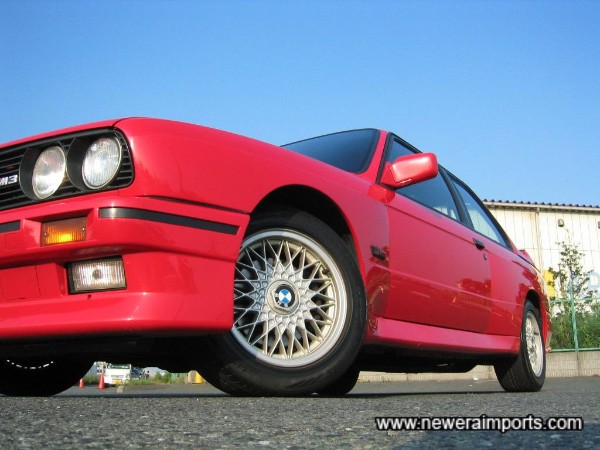 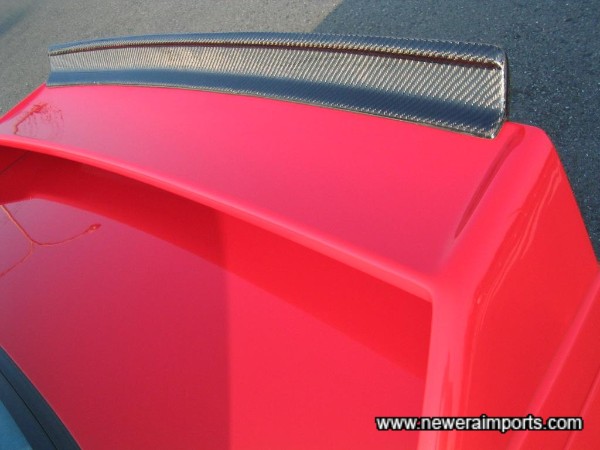 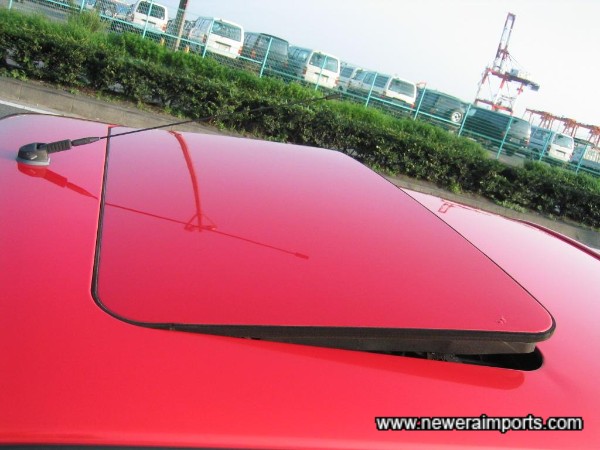 
First produced in 1986, the E30 M3 was the product of a factory effort to participate in Touring Car Racing. Unlike it's replacements the E36 and E46 M3's, the original E30 wasn't developed for the sports car market, but specifically for homologation in Group A touring car racing. In order to comply with rules at the time, BMW had to produce a minimum of 500 units a year and the basic race car would need to have the same basic engine, intake manifold and aerodynamics of the production model. The suspension had to have the same stock mounting points and while larger wheels were allowed, these had to fit in the production wheel arches. The all metal box arches were specially styled to enable 10" width wheels to fit within. The rear window and boot lid were restyled to improve aerodynamics in combination with the unique complete factory M3 bodykit. As these were for touring car homologation, none were ever made officially in right hand drive form. Never the less some examples were sold in the UK, one of BMW's largest markets. The M3 went on to become one of the most successful touring cars of all time and was hailed as one of the best driver's cars ever produced. Over the next twenty years, the M3 would transform from an almost single minded race machine for the road to an expression of what many consider to be the true Ultimate Driving Machine for the road. Even after twenty years, and subsequent increases in engine size (the next M3 is speculated to be V8-motivated), the interest in the rare first generation four-cylinder M3 has not waned and there are clubs worldwide catering specifically for this model, with specialist tuners offering upgrade kits to make over 300 bhp from this normally aspirated engine.
The engine is a high performance super strong 4 cylinder 2.3 litre direct descendent of the M10 Formula 1 powerplant. As standard it came with a forged steel crankshaft, a high flow 4 valve cylinder head, strengthened internals and 4 individual throttle bodies. As standard, power for non catalyst versions is: 200 bhp. The gearbox is a strong close ratio unit with a dogleg 1st gear, meaning 1st is selected to the left and back. This is a racing shift pattern, as 1st is only required for the launch usually, with 2nd - 5th being the gears used in the familiar H pattern for the remainder of a race. There's a torsen limited slip differential as standard too.
Our knowledge of these comes from having one of our own, a dark Silver 1987 model - in similar near standard immaculate low mileage condition. Having used it daily for the last 6 months, it's a car that's grown on us to the point it's now considered one of the family. Note this
Performance Modifications: To cope with spirited driving, the clutch has been uprated to a stronger sports unit. Still progressive, so it's useable in traffic, however. The exhaust - A stainless steel twin pipe system throughout has just one box silencer at the rear - giving a much sportier sound and slightly more power than standard, yet still remaining quiet enough to not become anti-social. Also fitted is an original wet carbon Evo 3 rear spoiler lip. Aside from these 3 modifications, this example remains standard throughout.

Interior is in excellent condition. This has been a non smoker's car. There are no faults to report. It would appear the last owner of this car was a small Japanese person and so the driver's seat is still unworn and cloth is still not thin. Note: Being originally supplied new in Japan, the interior's not leather as this would be considered too hot for use in Japan's40-45 degree summers (Seats and door cars, etc. are original check cloth). If you've seen how a typical 20 year old M3 leather interior wears, you'll understand how immaculate this example is in comparison (A full as new leather conversion can be arranged in original BMW finish from around £1,150). We will be valetting the interior and making it immaculate as part of the full ment includes: Power steering, ABS, original option HID headlights on low beam, electric steel sunroof, electric mirrors, tinted windows, air conditioning, central locking, original fitted mats, M3 signature leather steering wheel and gearknob, original computer, safety check, tinted windows, rear window blind, original 16" BBS wheels fitted with Yokohama DNA Grand Prix sports tyres of size 205/65-16 (Approx half worn).The auction grade of this example is 4b (Auction sheet available) This example is in excellent condition. There are no stone chips to the front of the car, no rust or body damage to report. Clearly this car's been superbly looked after and garaged through most of it's life. Far better than the rusty examples that have endured over 17 British Winters. This car's never seen salt!
Driving: E30 M3's are great fun to hussle, with fabulous sure footed rear wheel drive handling that favours oversteer but never bites and surprisingly high grip. The engine is a gem with strong torque from low revs with strong linear power all the way to the 7,000 rpm rev limit and a note that's unmistakably M3 4 cylinder. The gearbox despite being nearly 20 years old is still precise and quick shifting with perfectly spaced close ratios to allow performance to be kept on the boil when pushing hard. This is a car that feels as if it was built to last and this example certainly has! With only 130,992km (81,412 genuine miles) This examples is likely to be one of the lowest genuine mileage E30 M3's currently available for the European market. It feels tight and is rattle free with excellent response. There are no mechanical faults to report with performance. Clutch is fine, with no warping to disc brakes. It's evident from the condition of the car throughout - this car's been very fastidiously looked after. We hear reports of these cars covering large mileages of as much as 500,000km. This car's got less than a 1/3rd of that!
Investment: As one of the icons of the 80's, an original low mileage E30 M3 is undeniably collectable. This example is in stunning original condition. Having been supplied new in Japan, it's never seen salt and is therefore rust free beneath as well as bodywise. If you're after a car that can only appreciate from now, whilst still remaining an excellent and reliable daily driver - this is it!
Complete with full UK conversion (Speedo should be left unmodified, as a genuine M3 and first UK registration, MOT, 12 month's comprehensive warranty, full valetting and 6 month's road tax, this one off concours condition E30 M3 is available at a depreciation proof £9,995 OTR.
Now completed and ready to register to first UK keeper! If you've been looking for that ellusive very best condition example of one of these, this is the car - Viewing is strongly recommended! Please Contact Us to arrange an appointment or for further details on how to reserve this very original and immaculate BMW E30 M3. Hurry - examples as original and rust free as this are VERY RARE!!
Newera Imports - suppliers of the highest quality examples of the best sports cars from Japan. As recommended by J-Tuner magazine, Japanese Performance Magazine, internet car clubs, forum members and UK specialist tuners!