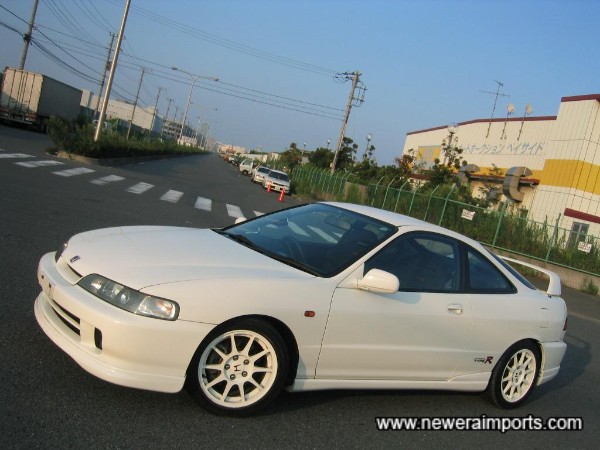 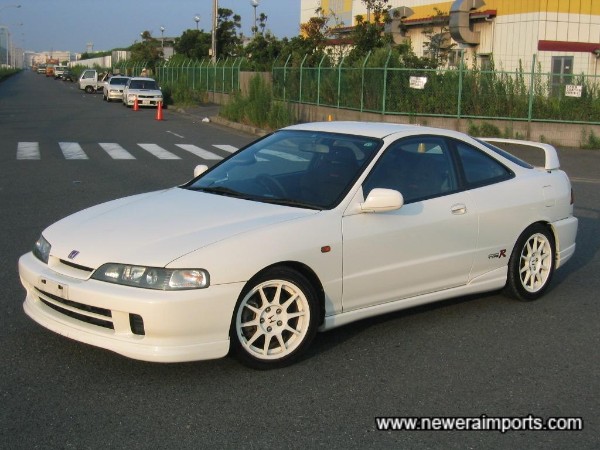 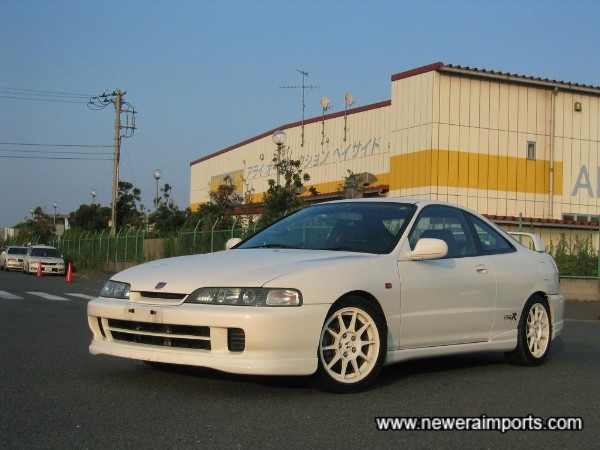 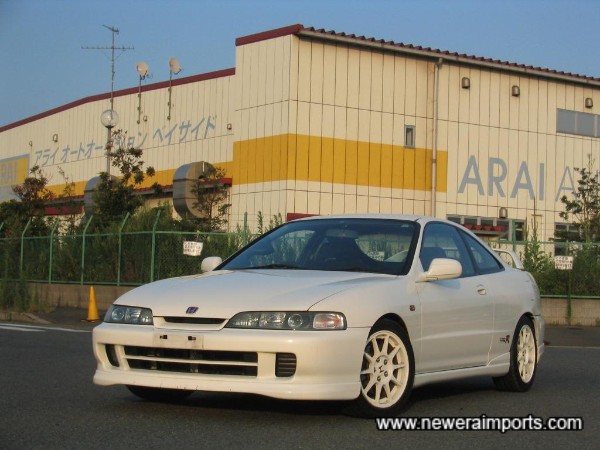 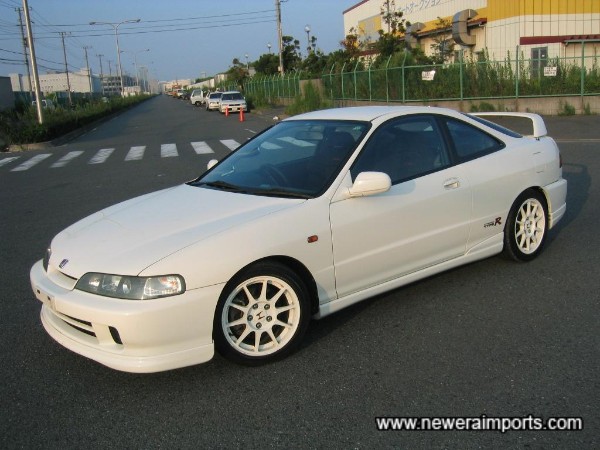 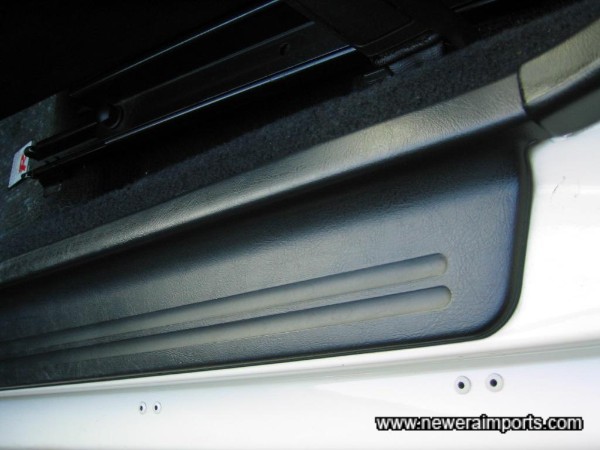 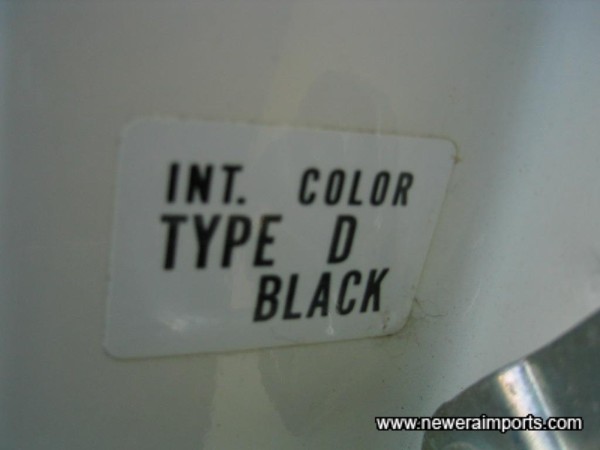 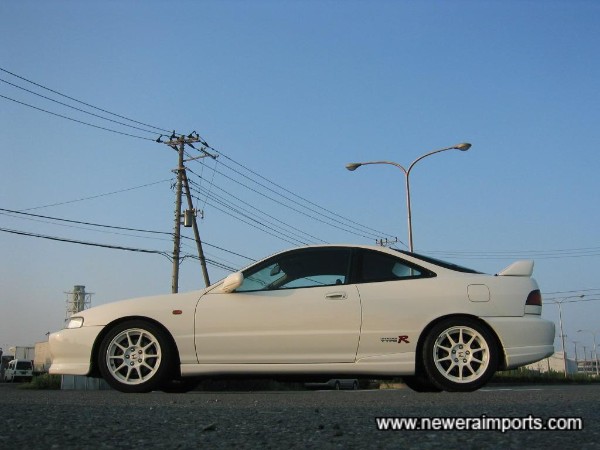 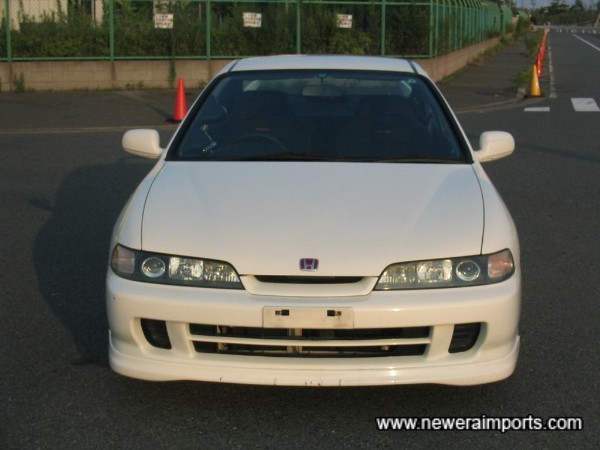 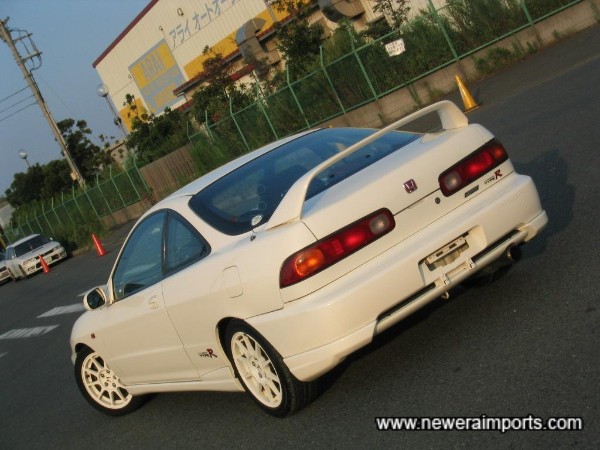 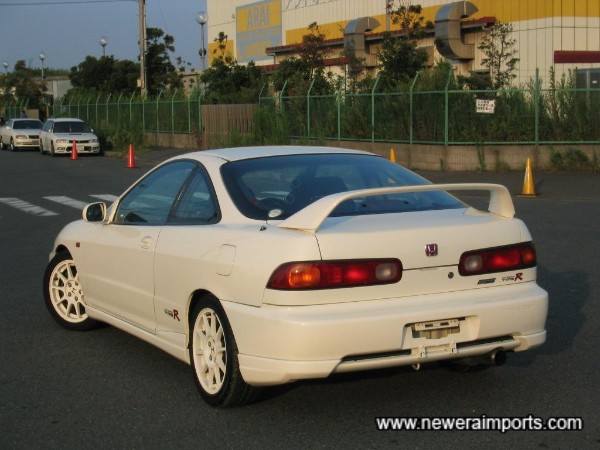 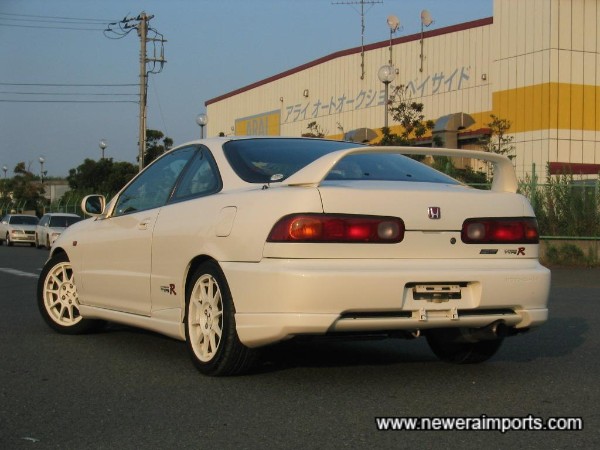 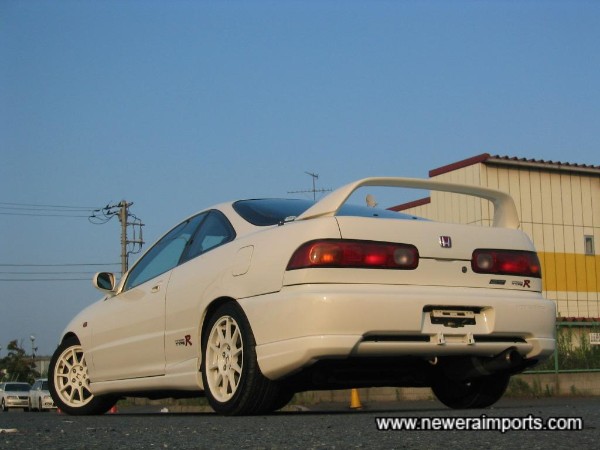 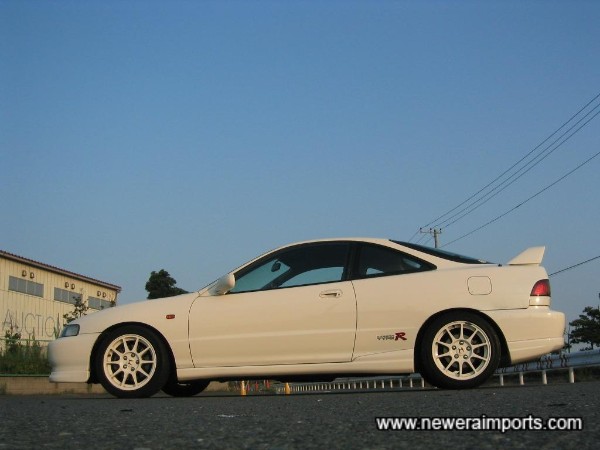 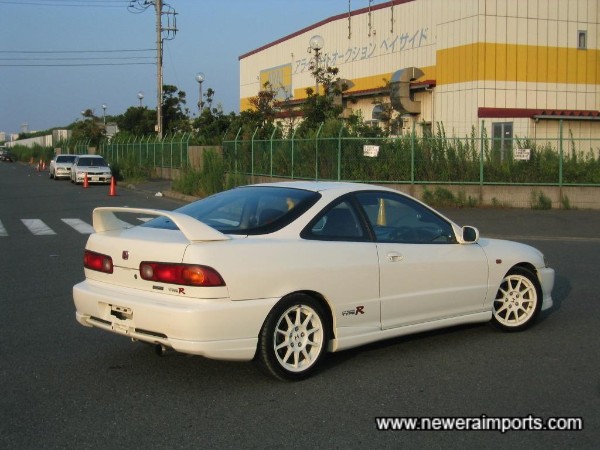 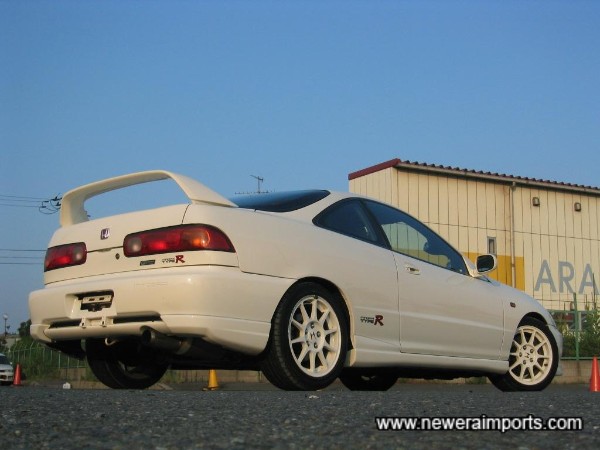 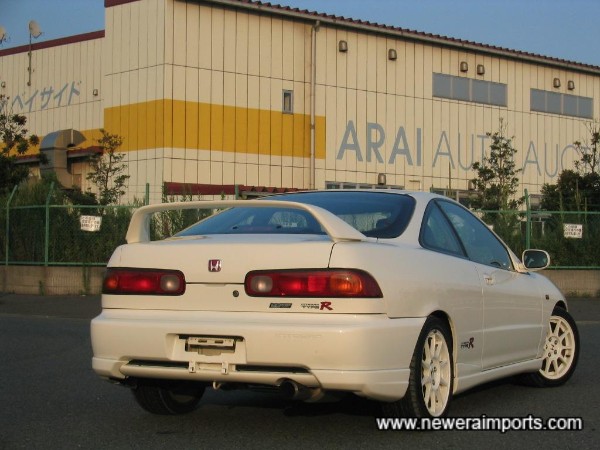 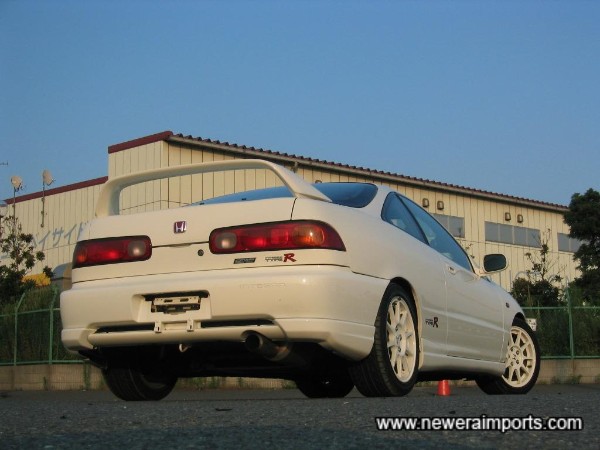 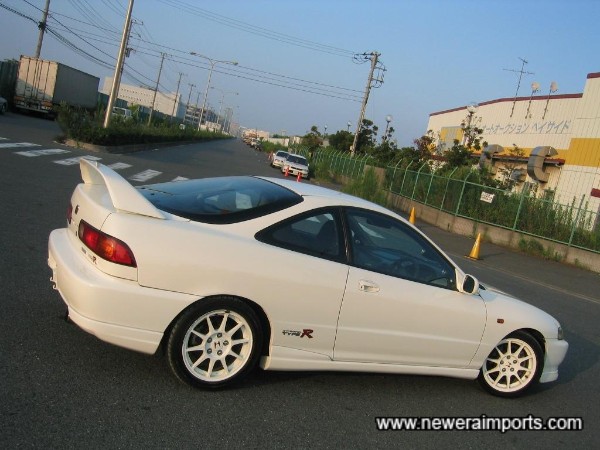 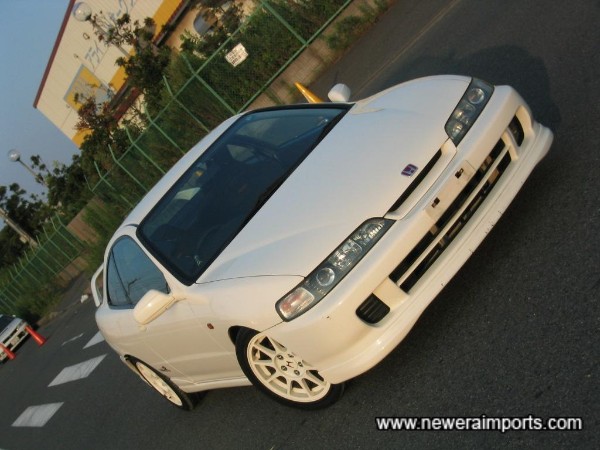 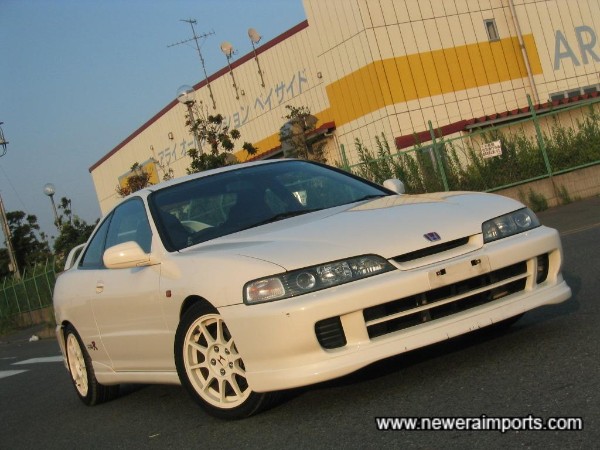 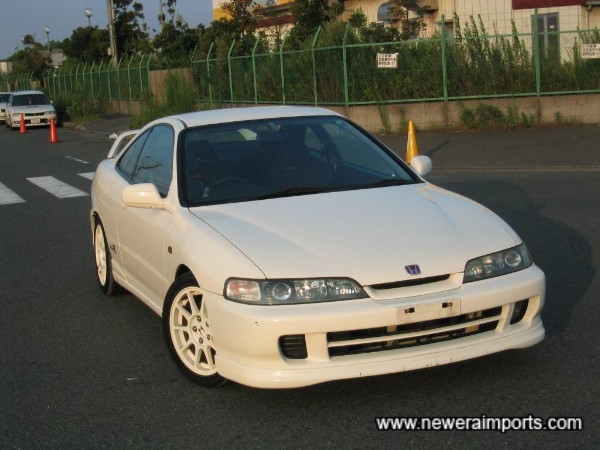 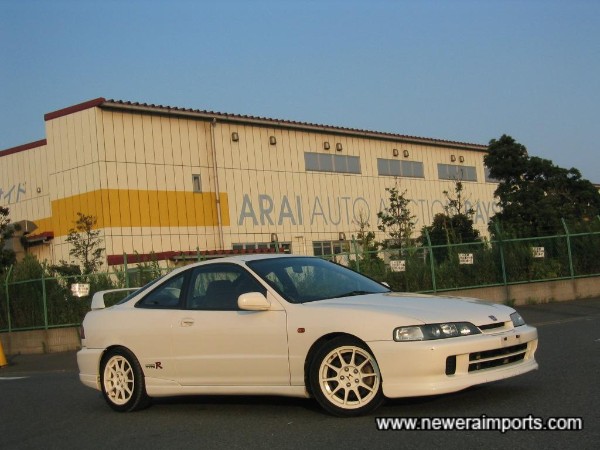 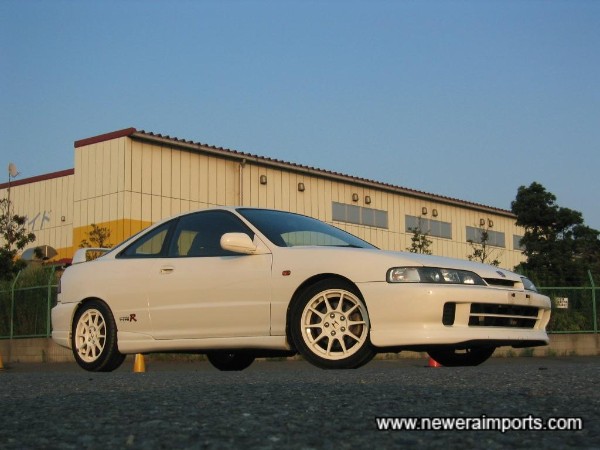 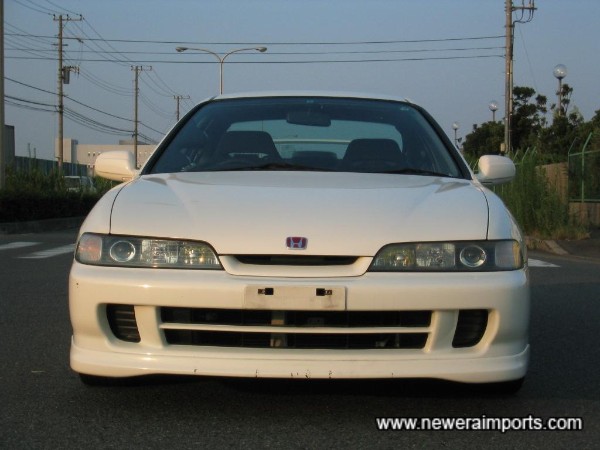 Was helping Miguel out at the Yard today, so we decided to clean up the Integra, and take a few shots of it. Miguel took the better ones, as I was having to zoom in (was standing at a distance to keep shadow out of Miguel’s shots).

It’s no trouble to take the piccies, as If you decide you don’t want the car, Miguel would have had to take pics of it for the website anyway.

Took it for a drive as-well. Miguel did the proper driving, I erm, parked it and stuff.

For mutty – Feels nice and light to drive when I was moving it about. Seats are v.comfy, and support you very well (as you will see from the movie hehe). It has aftermarket suspension, Apexi N1 coilovers- which is very good. The ride from them as they were set now is no more lumpy than the Skyline (and the bumps in the yard are horrendous so you can tell!). The good thing about them is they are adjustable- unlike the original Nismo Shocks and Springs on the Skyline.

What that means, is you can make the springs as hard or as soft as you like (within adjustment), alter the damping (which will affect how jolty the car is), but another neat feature a lot of suspension doesn’t have is you can change the ride height of the car independent of the “hardness” of the springs. Usually on cheaper aftermarket suspension, if you have the car sitting high (to clear speedbumps and Norfolk roads), the springs will be hard- not nice for a good ride. To have them soft, the car would sit very low, catching on speed bumps etc. The car is really sure footed, it has an LSD as standard, so grips like shit to a blanket. The way the power comes in may sound vicious, but it’s very controllable- as fast as you want it to go- no surprises.

With these you can have it set however you bloody like! Soft enough to take in the bumps, high enough to clear speedbumps, and as low or as hard to make it corner well. With a bit of thinking dad could set the car up to make it a very good compromise for all your types of driving.

In the video the car sounds quite loud, we were driving it hard to check all was well- which it is. When you put your foot down, it will make a noise- which is great- I think it sounds lovely, but will await to hear your opinion. When driving gently, it sounds quite quiet- less noise than the Skyline- but still just enough to sound special. It’s good, because even my noisy headed self can find the Skylines exhaust loud, just like when cruising up a hill (esp. when your knackered) it can be a bit boomy.

With regards to practicality- the car has a nice big boot- much bigger than the Skyline. Seats in the back also look plenty roomy enough to house normal adults. Seats will fold down if you need the extra space to carry large amount of shoes or something. Not sure if it’s officially a four or five seater- didn’t check.

Other bits- The car has a full Mugen exhaust system- manifold, original cat by the looks (which Miguel informs me is high flow as standard – you need one for MOT porpoises), mid pipe and rear box. It’s all stainless, so should work fine. If you look at the pics, you might think it looks quite small (the exhaust), but too big an exhaust on an Integra will make it worse than standard. This one is developed by Mugen – Honda’s official tuning branch, so you know it’s gonna be high quality. If you really wanted to zoom, you could ditch the cat, but this would make the car a bit noisier, and require changing for mister MOT man. The car also has a Mugen airbox- complete with cold air feed – didn’t check the precise location of the pickup for it, but it might require careful driving through floods – shouldn’t be too big a prob tho. This is the best quality airbox for a Integra. As it’s a proper airbox – not a cone filter, it doesn’t sound annoyingly slurpy- something I know you would hate ma. The plug leads have been changed to Nology Hot wires- basically upgraded plug leads – a cool touch. Inside the car is fitted with two Apexi electronic gauges neatly installed on the a-pillar – one for oil pressure, and one for water temp – they look groovy, and let you know accurately when the car is warm and ready to be driven hard (if ya want too!). There’s also a shift light mounted neatly on the dash – good feature to have, as it flashes madly when you approach the redline telling you to change gear- you would think you don’t need it, but it’s a handy reminder, and besides it looks cool. Almost forgot – the car has solid aluminium Mugen strut braces front and rear.

Steering wheel has been changed to a nice Momo aftermarket one, feel lovely and comfy, is a bit smaller than standard to aid steering, but is still big enough to easily manouvere the car around parking etc. This does loose the original airbag though – if you really wanted the airbag, you could get an original and re-fit. But I say keep the MOMO – EEES NIIIICE – almost brand new!

Erm, almost forgot, there is a Billion Fan controller, not really necessary really for you guys – you can basically make it so the fans cut in earlier than normal if ya want.

Interior is very nice, maybe a small bit of cleaning up required- but condition wise it’s great – nothing to repair, and no stains. The extra blue seatbelt is for a four point harness- which has been removed.

The dash is nicely styled, with carbony effect bits, and – get this – Cup holders, that’s really the main selling point of the car. J Looks to have a decent stereo fitted too (MP3 cd-able (good), with normal CD, Tuner and minidisk) although you might wanna change/convert this for uk. Stations. Speakers have been uprated too, with bigger rear speakers, and tweaters for the front. Do you like bass?

Underneath the car is very clean – minty fresh.

Tyres still have a good bit of tread on them, these are also the right tyres for the SVA, so no messing about. (this is provided they have the right e-markings- we didn’t check, although its unlikely they wouldn’t).

There is a small bit of kerbing to the wheels- really not much to worry about, although if your being reaaaaly fussed you could have them sorted. But even me (mister perfectionist) wouldn’t bother.

4 pin dents on the nearside quarter, 2 one the drivers door, 1 on the passenger door, Stone chip on the bonnet which has been touched up (you could redo it better), front bumper has a small scuff on the corner, front bumper lip is scuffed in places. You can see some of these in the pics, the others are the usual “huh- what’s he pointing at” Miguel style of pedantic-ness. But you know exactly where they are!

Notes: It’s had a recent oil change – oil is clean. Mileage is 91834kms- 57000miles. Cambelt has already changed, when the car was 5 years old at 78000, normal interval is 100,000 I think – its defo been a well looked after and loved car. Honda engines also age like a fine wine as they put the miles on, they loosen up and get quicker. The car has been smoked in at one point, but there is no smell of smoke whatsoever. As it’s a 99 model – it gets the JDM Tyte yo, Numbered plaque, 62. The shock covers in the back are removed due to the strut brace. Spare wheel is unused. Gearbox is very toight- Synchros are good- if owned by a fool these can be worn.
Brakes aren’t warped.

For the attention of dad- (overt mother’s eyesJ): Miguel tells me on good authority this will make an excellent tool for cross country roads, they are FAST. You will embarrass and piss off many other supercars! Miguel did when he had a DC5 for a bit….. Imagine a fireblade engine, but in car form. Bags of torque, but goes nuts above 6k…..

Seriously though, probs about £6500 on the road, and it’s a car Miguel would sell for £10000! The extras are worth around £5000 as new prices. As for petrol consumption, if you have done your homework, you should find it will reliably crack 30mpg, but less if you drive harder in the VTEC-zone. At all costs, it’s going to be much better than the Skyline when driven equivalently. If you can’t afford this, you may as well get a Moped!

Methinks this is the car for you….

Answers on the back of a postcard (or email..)

These are Miguel’s pics, if you want to see the car looking crap, I’ll send you mine J. Also you will have some videos shortly.