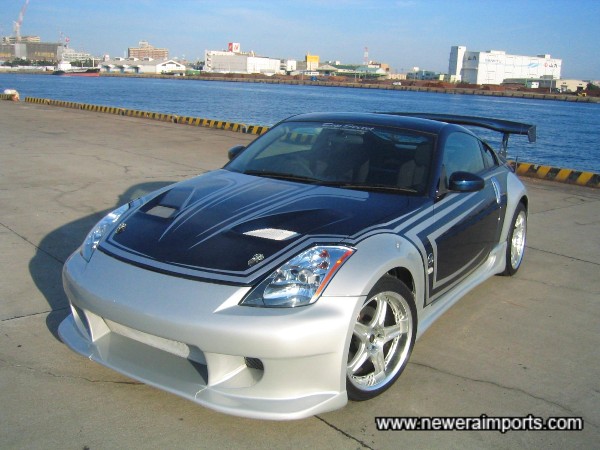 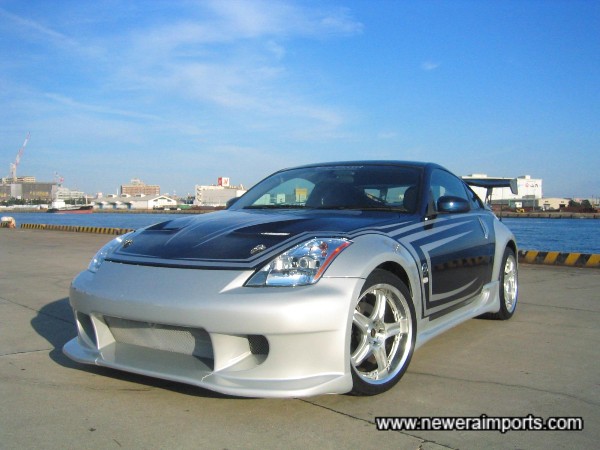 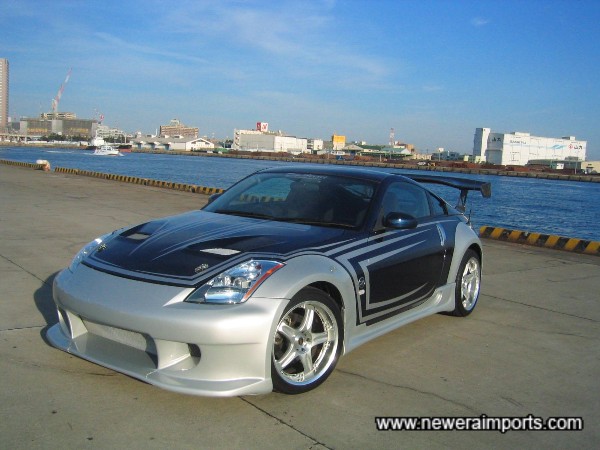 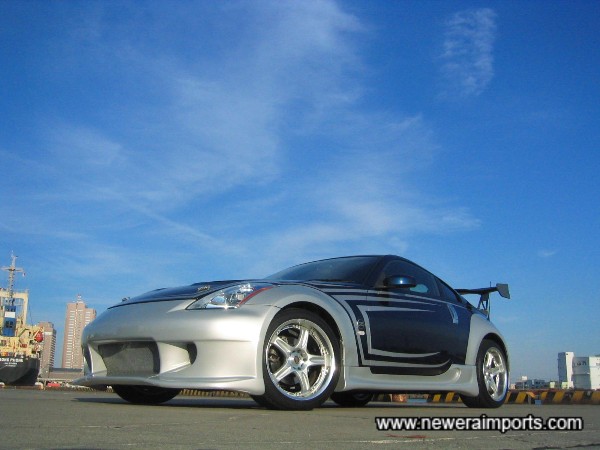 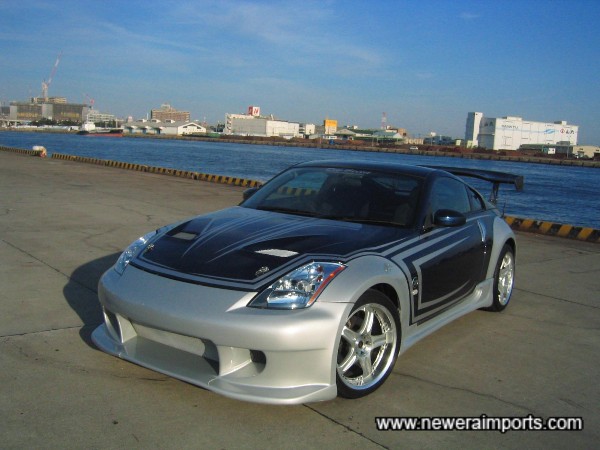 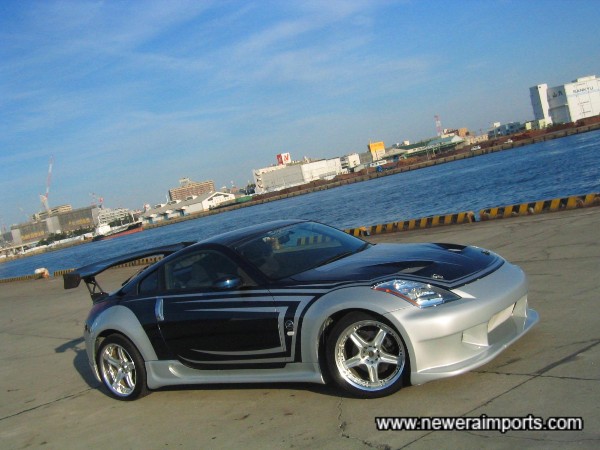 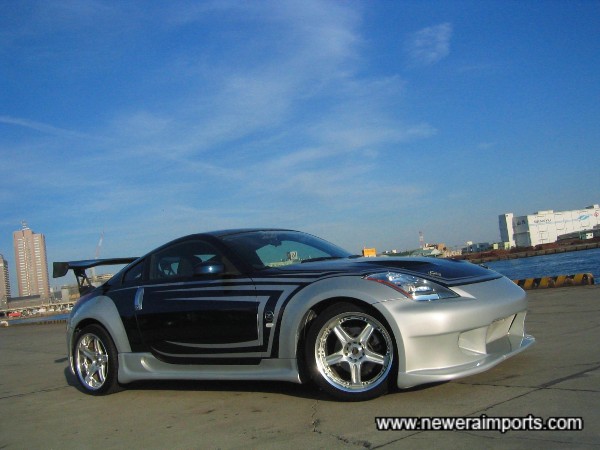 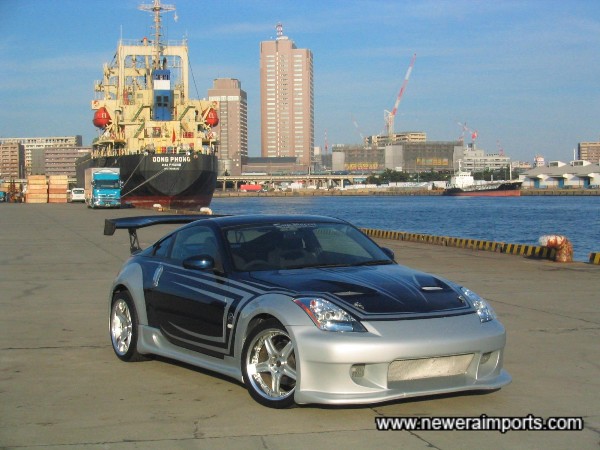 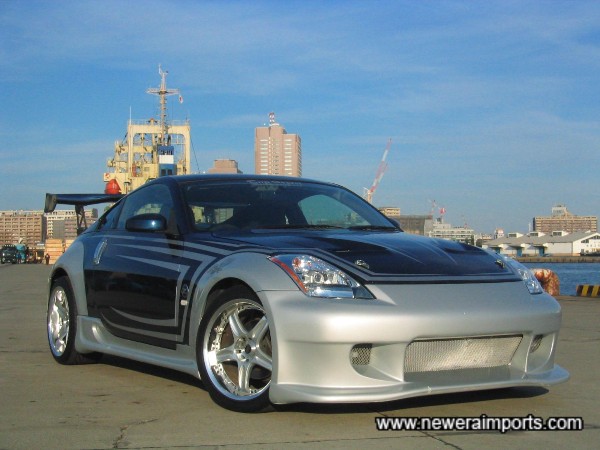 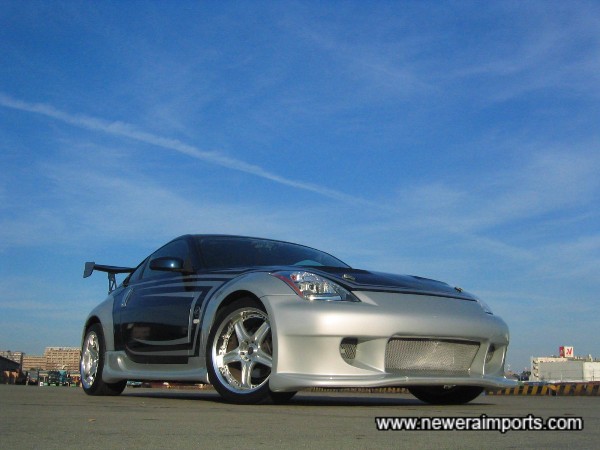 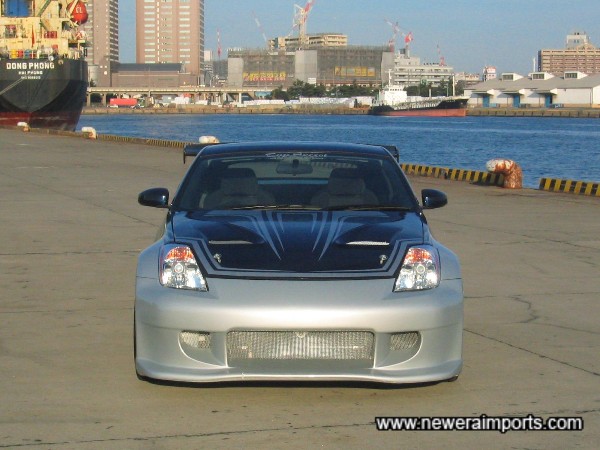 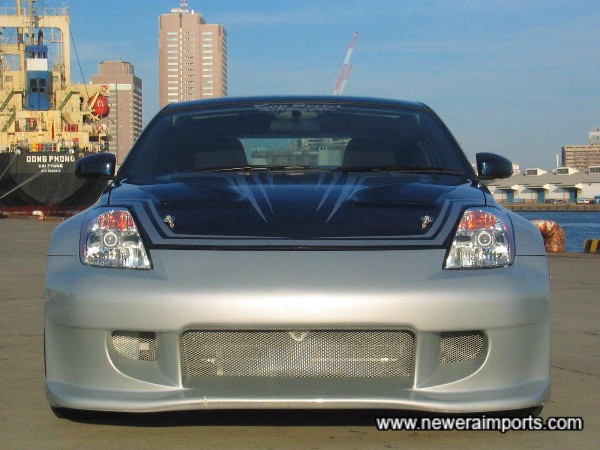 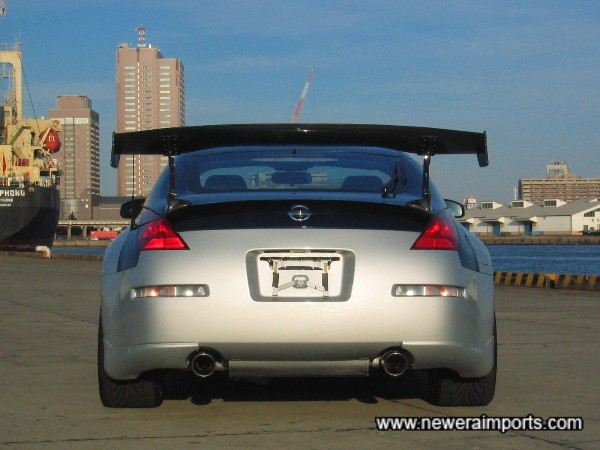 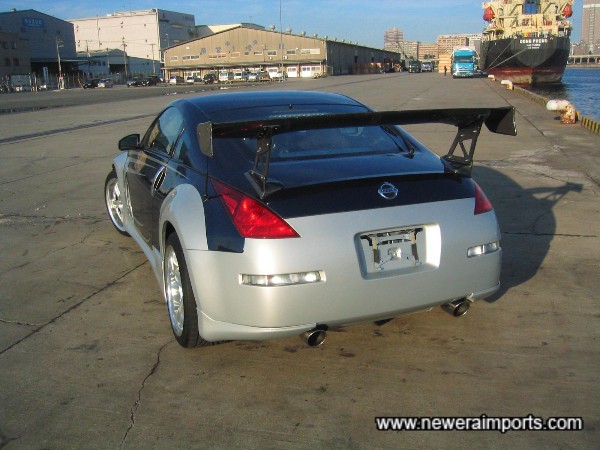 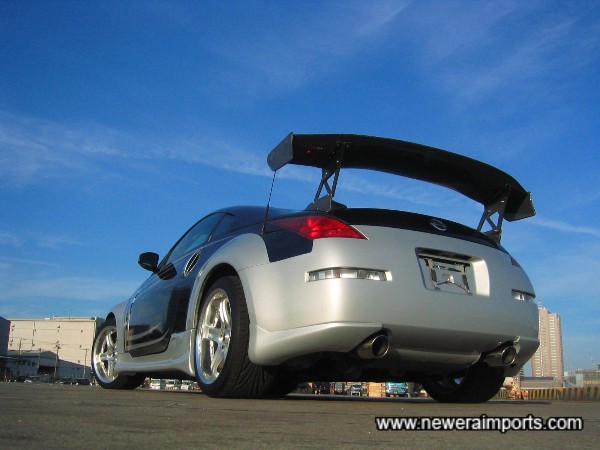 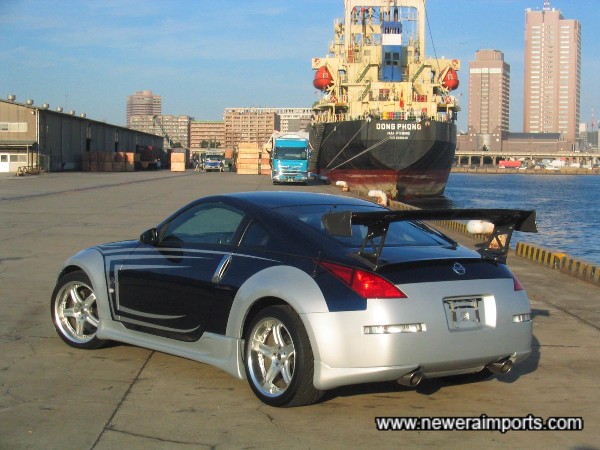 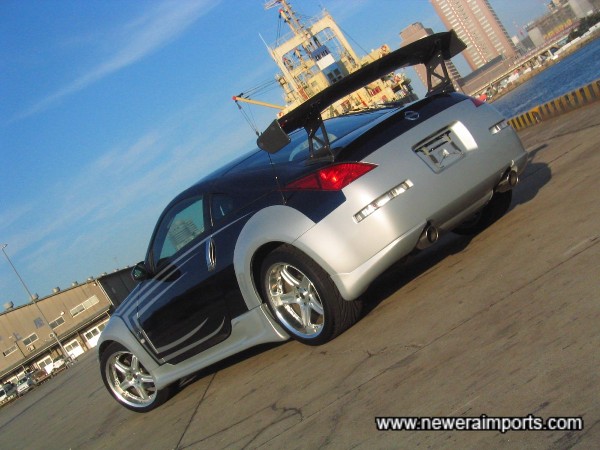 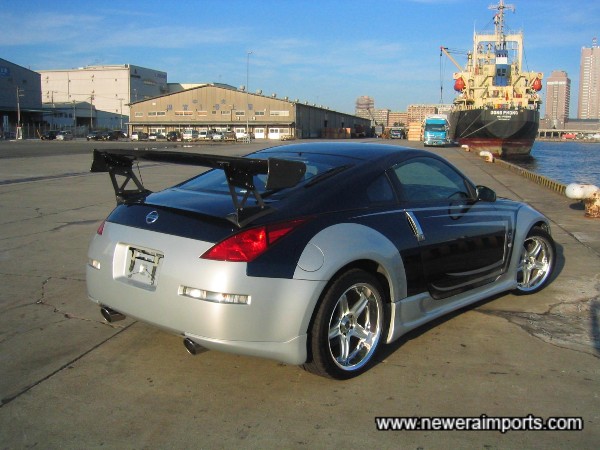 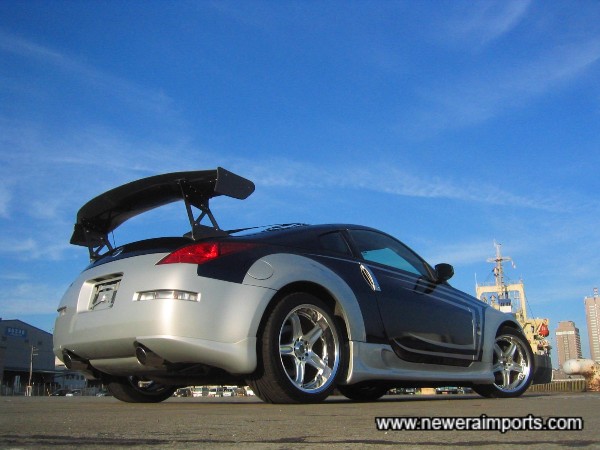 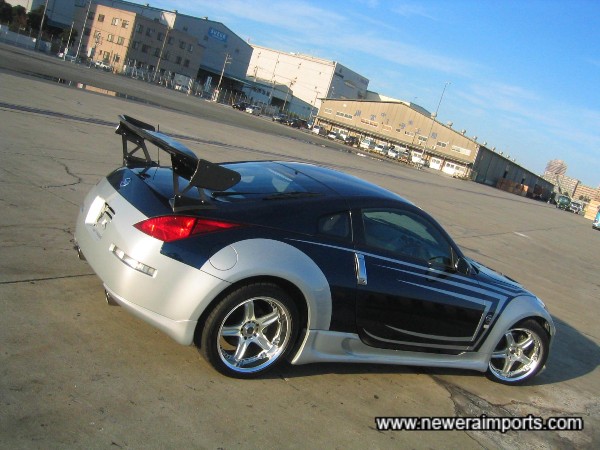 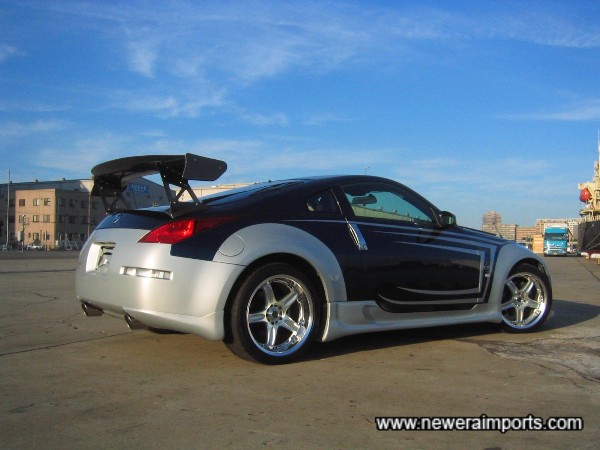 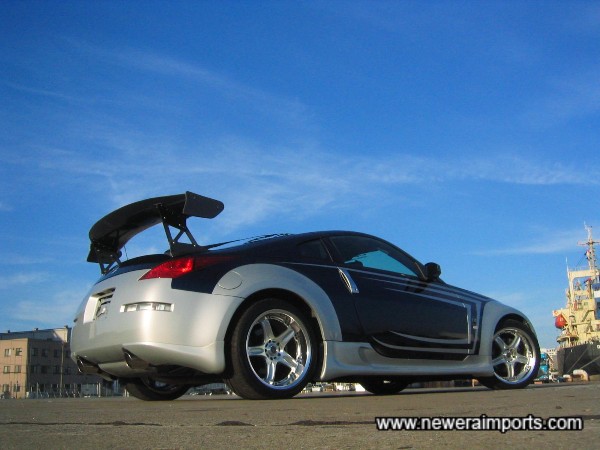 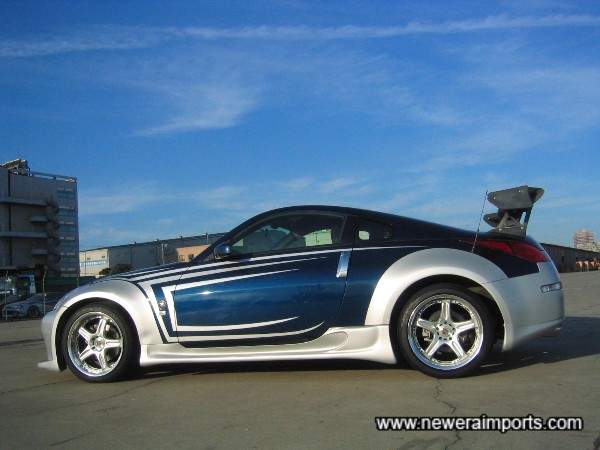 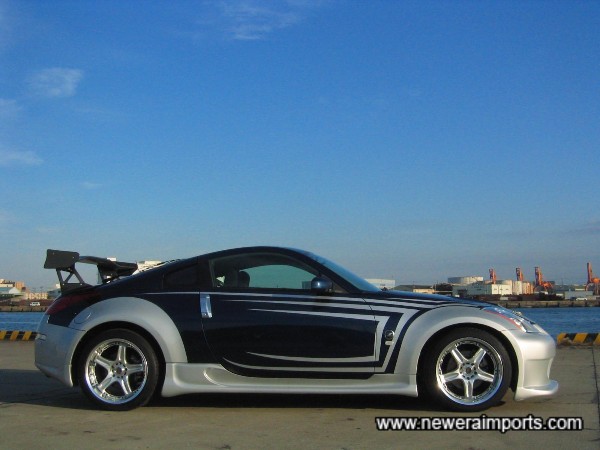 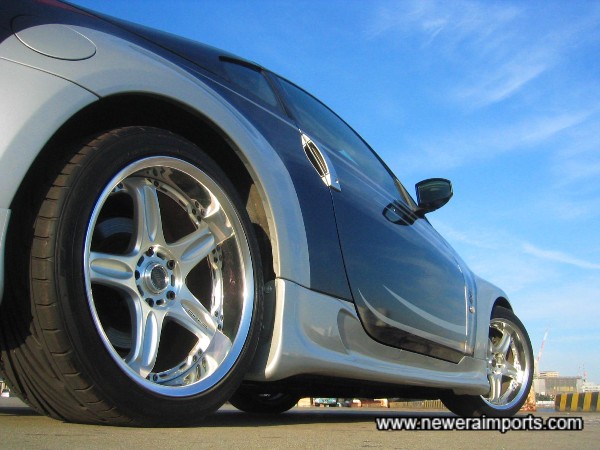 
This 350Z was sourced specifically for Tokyo Drift - Fast Furious 3 by Newera Imports!! Starting off as a completely standard 2004 blue metallic example, it was then taken to Top Secret's 2001 Bodyshop, where it received their Super G Force bodykit, then the custom paint work to transform it, before being container shipped to make it's appearances in Hollywood's Universal Studio as one of the actual cars featured and driven in the making of Tokyo Drift - Fast Furious 3!! This car was used as one of the 350Z's belonging to the Yakuza gang. It appears several times in the film.
Cosmetic Improvements: Top Secret Super G Force Bodykit consisting of: Front Bumper, Vented bonnet, Side skirts, rear valance panels. Top Secret Carbon Fibre Adjustable GT Wing, 18" Volk Racing Forged Alloy GT-C Face 2 alloy wheels. Tyres, as supplied exclusively for the film, are Toyo Proxes, 265/35-ZR18 on each corner. The bodykit was sprayed professionally off the car and a full respray carried out to top quality, with a dark blue over Silver scheme. Quality is first class! To us, having been involved from the very beginning, this is the most classy of all the 350Z paint jobs for the 3 different models featured in the film.
Inside: A Sparco steering wheel has replaced the original. Behind the seats are some harness eyelets mounted. 4 point harnesses can be supplied if desired - for added effect.
Being only cosmetically modified, this car is able to be used now, for shows, or as a daily driver and comes with all the usual specification of a 350Z. Equipment includes: Factory Immobiliser (UK insurance approved), central locking, power steering, ABS, Switchable stability and traction control, Climate Control Air conditioning. There's a neat little drinks holder on the passenger side, which folds into the dash. When doors as closed, each window comes down a fraction, then closes fully, so that a good tight seal is made each time. Note this is Automatic Tiptronic - which is not been officially imported / supplied by Nissan UK.
As this has also been a non smoker's car since new, the interior is completely unmarked without any creasing to the seats, etc. When sourced, this example was of auction grade 5 and it's in even more outstanding condition now!

The engines on these sound awesome, with a characteristic spine tingling growl from the free reving 24 valve 4-cam variable valve timed V6. The gearbox is at easy reach and has quick, light travel between the 6 forward ratios and reverse. Instruments also give excellent and attractive illumination to show the driver everything he needs to know. Handling on these is superb with a true RWD bias and a chassis that's probably the most entertaining of all current new Japanese Sports car models. The more we look at these, the more we like them and judging by their popularity in Japan the United States and Europe, these 350Z's are finding a lot of happy owners.

Total cost of the bodykit, GT Wing, labour, High quality colour change painting and fitting cost in the region £5,000 - together with around £2,500 for the wheels and tyres. Being a 2004 model, it's also one of the more recent 350Z's!

Please Contact us using the inquiry form for further information on this Fast Furious 3 Tokyo Drift 350Z or to source an alternative example!