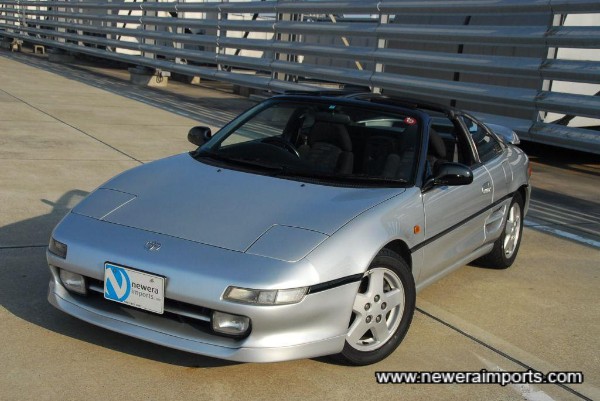 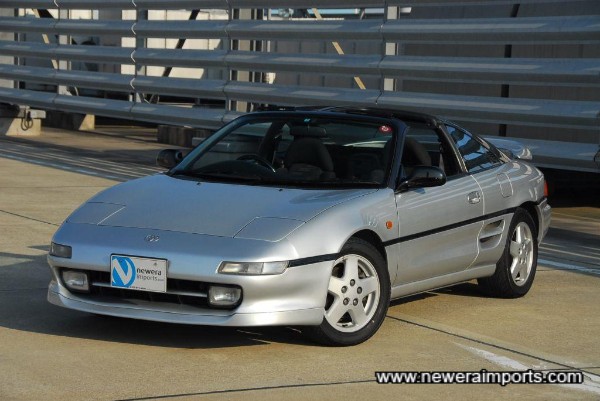 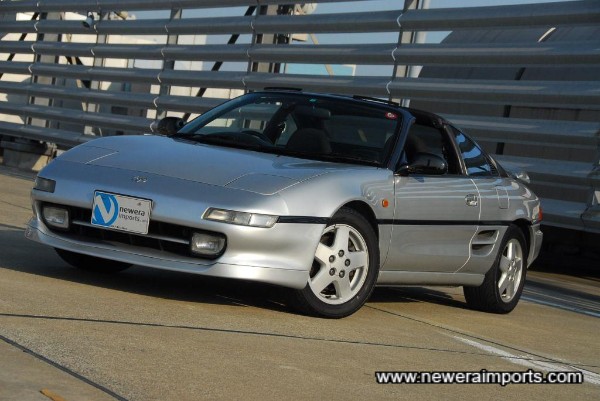 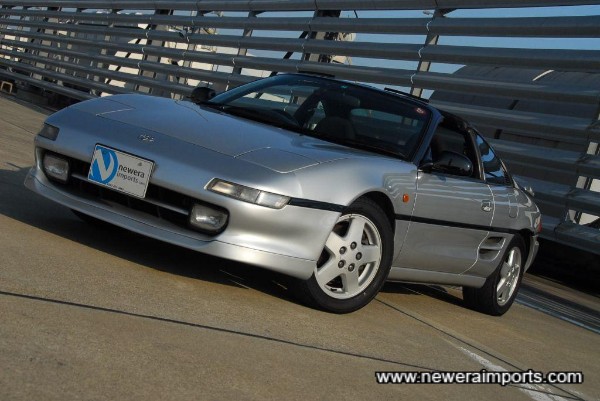 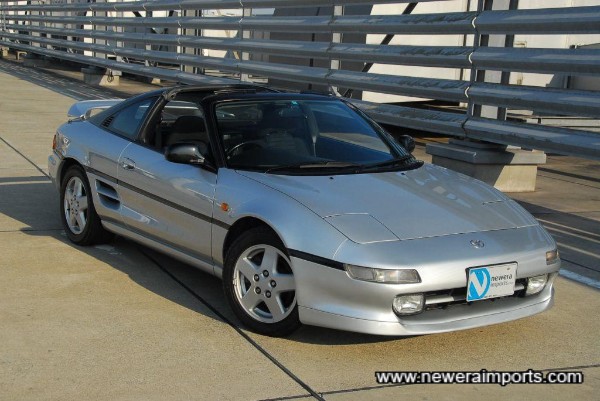 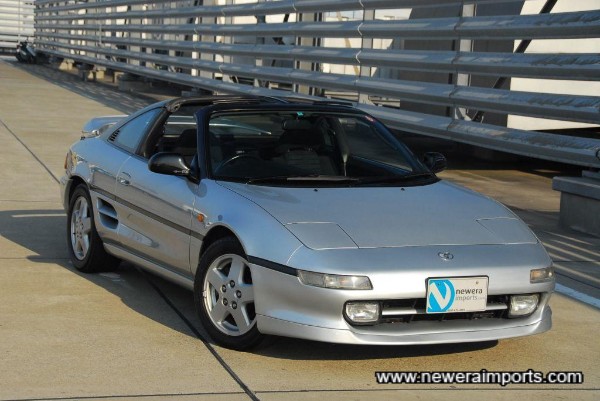 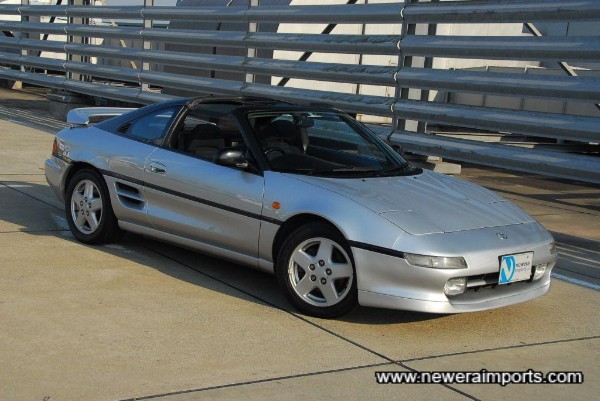 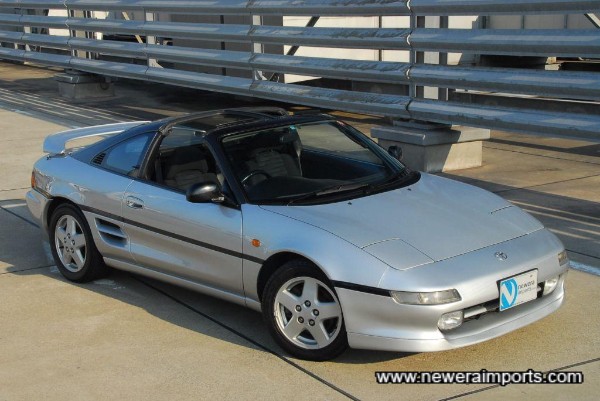 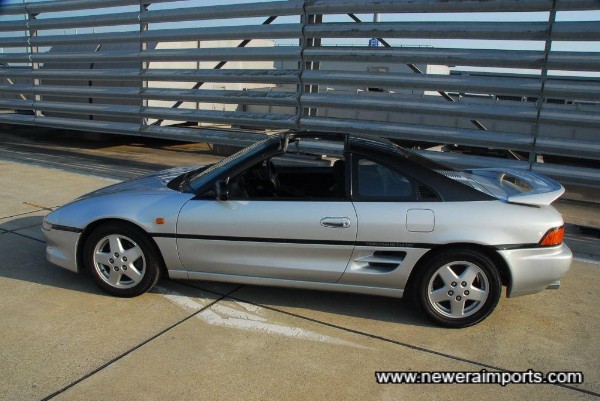 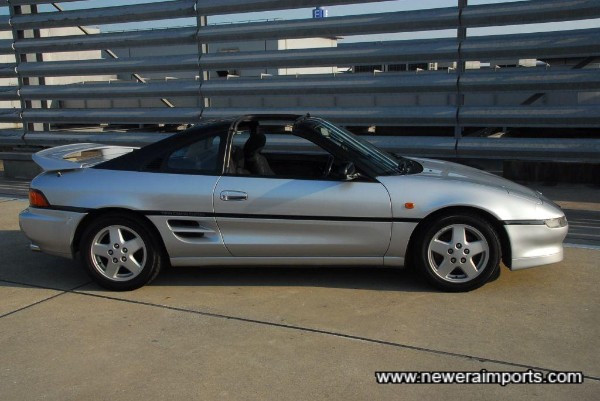 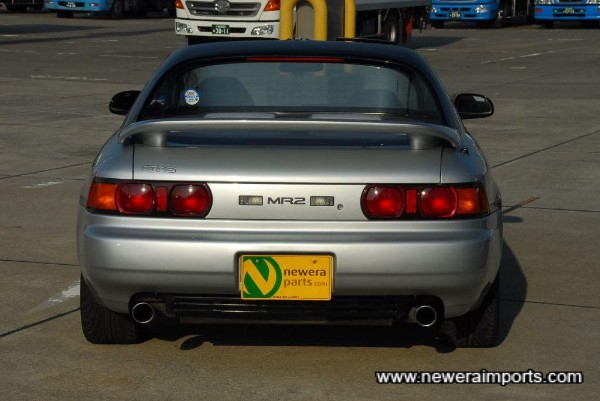 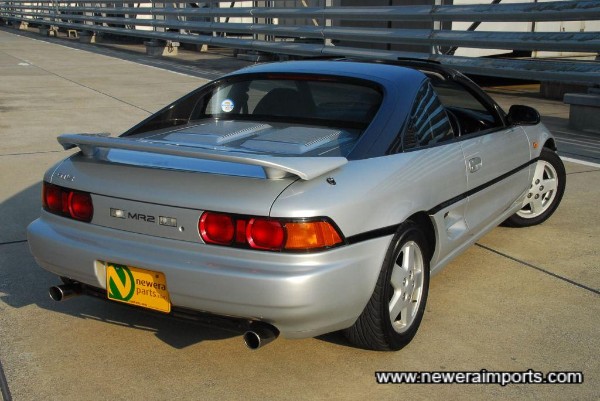 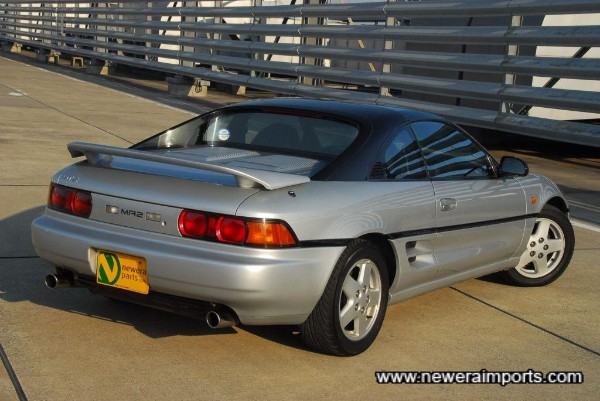 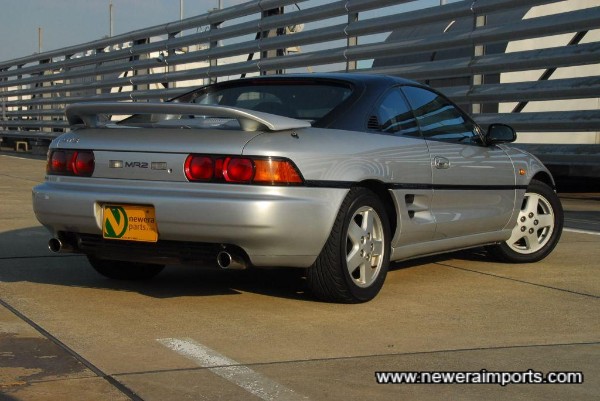 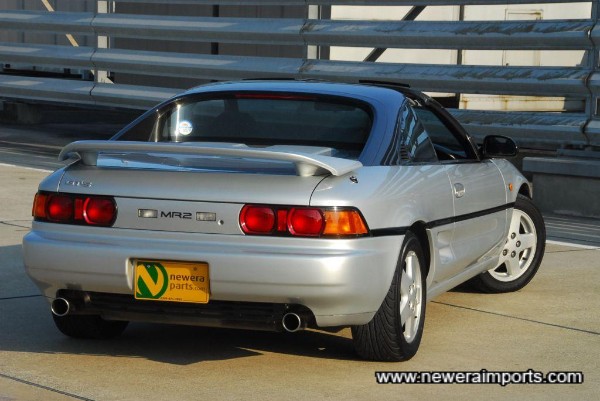 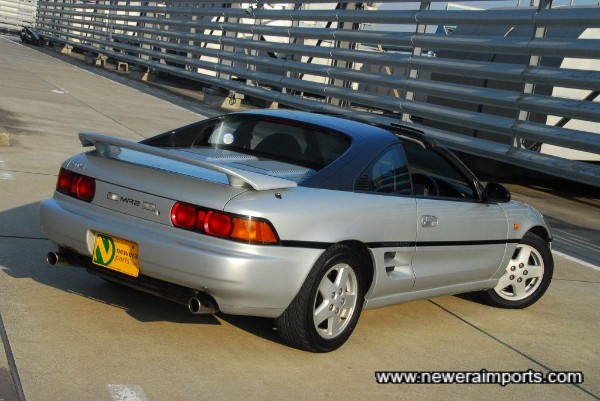 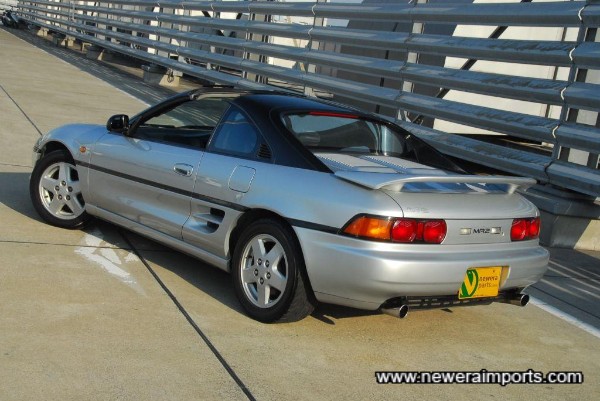 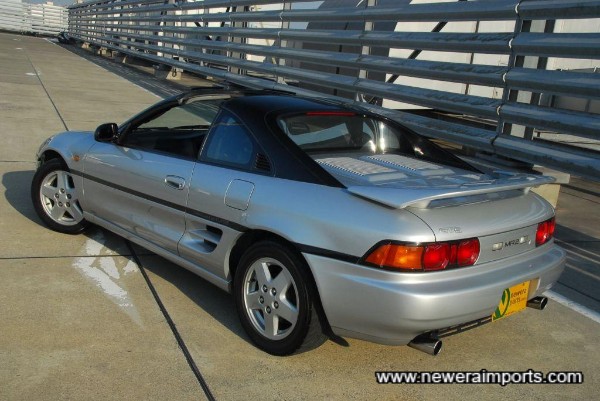 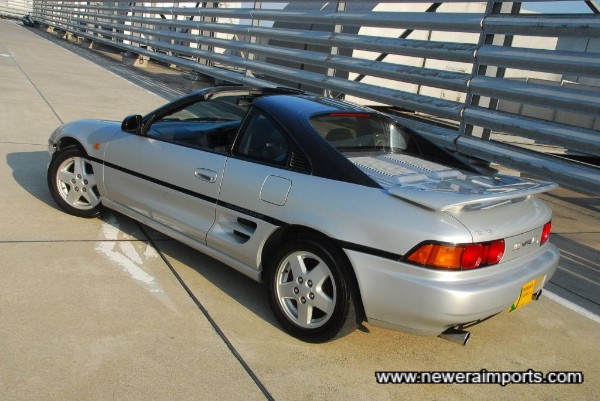 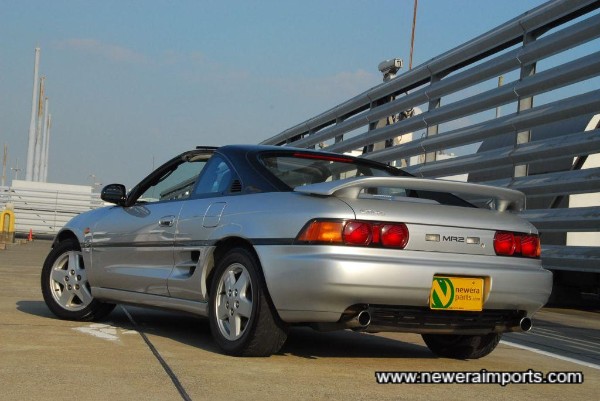 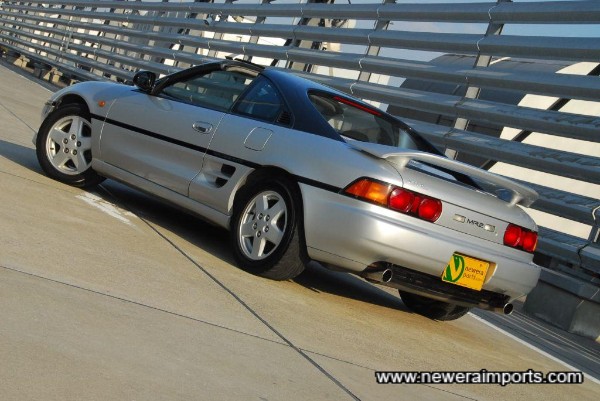 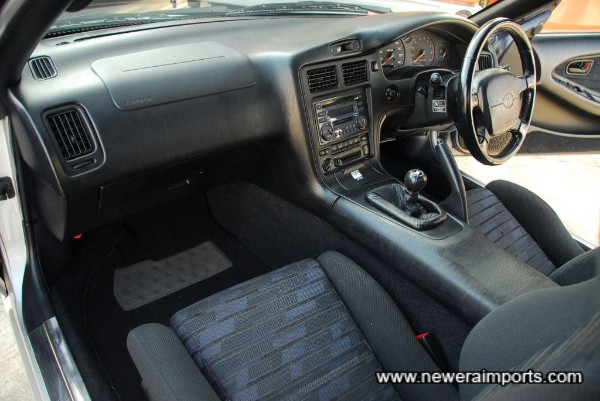 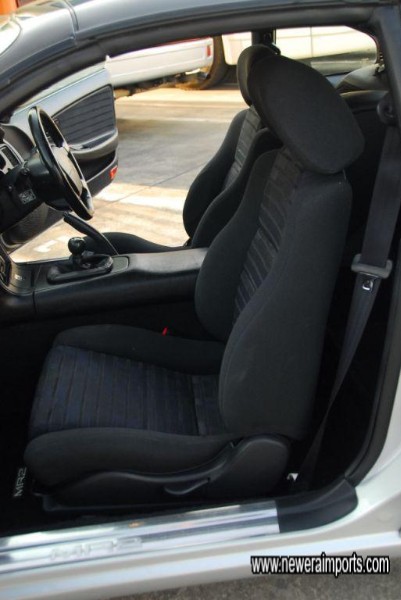 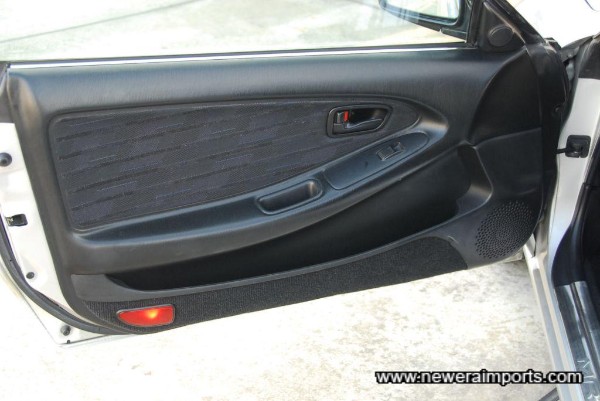 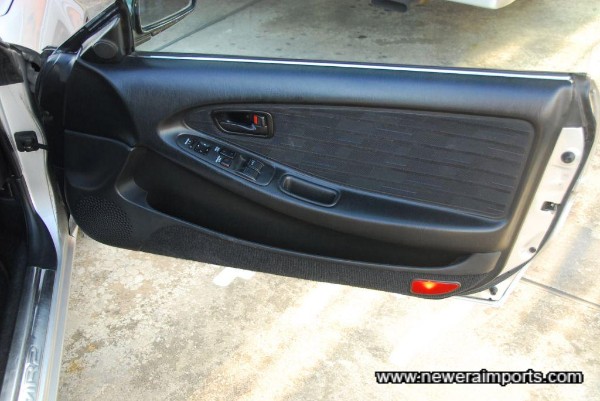 This is a very rare Revision 4 T-Bar Turbo MR2 anniversary edition (One of only 75 recorded as built by Toyota), in 2 tone Silver and dark grey metallic - in concours condition with totally original specification throughout, right down to the Toyota original option Audio equipment. A one owner car from new - it's been garaged most of it's life paintwork is pristine. We haven't come across a better T-Bar in a long time. Make no mistake, top condition original MR2's especially the Rev 4 5 models (The only ones we target these days because they're the best spec!) are destined to become cult classics. Think about it - aside from the NSX (Endowed with similar performance to this car) what other mid engined high power sports cars came out of Japan! - The ZZW30 MR2 (MR-S in Japan) was only equipped with 140 bhp. This MR2 turbo came out of the factory with 245 bhp. The MR2 turbo was made from 1989 onwards for the Japanese market only, whilst the rest of the world had to make do with normally aspirated versions only! In 1994 Toyota introduced the Revision 3 turbo model in Japan. Fitted with a more version of their 3S GT-E turbo engine giving 245 bhp as standard, other revisions also brought uprated suspension for greater grip and safety at high speeds, uprated interior trim, as well as newer larger sized wheels, plus of course new fresh colours. With these changes the MR2 became a better car - which is still in strong demand by enthusiasts both in Japan and UK, etc. The Revision 4 model was introduced at the very end of 1996. In addition to the Revision 3 modifications, it received a new uprated ABS system as standard, Dual SRS Airbags, clear front indicators and (orange) side repeaters fitted on the side of each front wing. Glass was also changed to a more modern green tinted type (Previous models had glass in brown-grey colour). With this example, what you see is a very rare combination, especially because of the mint condition exterior very rare T-bar! - To find a Revision 4 with this spec. is usually close to impossible. Standard specification includes: Dual SRS airbags, ABS, Climate Control A/C, PAS, P/W, Light green tint on the windows, remote controlled door mirrors, original floor mats. The T-Bar roof also includes interior covers. The glass can safely be stored behind the seats. The spare and original tool kit are complete and unused. Audio equipment consists of Toyota supplied CD/MD/Radio with 12 disc CD changer in the boot. Interior: This has been a light a smoker's car. Cigar lighter has been used, but we found signs of smoker's use or smell of cigarettes. Please note that the audio is untested, has no manufacturer's guarantee and therefore comes free of charge with the car. Exterior: This car is of auction grade 4.5. and this is an MR2's that has clearly been cherished since new. Please note: With the sun's effect, some of the panels appear to be of different shade depending on how light hits them. There is NO mismatch of panels, this is merely an effect of light direction. Paintwork is in pristine condition throughout. Most noticable is the lack of stone chips at the front and no pin dents at all along each side of the car. It looks like a near new car throughout. Underside of the car is as new. There's no rust at all on this example - it's never seen salt (Pictures of underside can be taken upon request).Looking carefully around the bodywork we noticed the following minor faults: There is a light scratch on the driver's door mirror. One pin dent on the passenger C pilar. Rear bumper has 2 very light scratches - not usually visible unless looking very closely. Each of these minor faults is too small to repair, but all have been photographed to provide a complete description. This MR2 has been regularly serviced by Toyota. Oil is relatively new - clearly this car wasn't driven hard - judging by the fact the brake discs still look lightly worn and there are virtually no stone chips on the car at all. Timing belt was changed at 60,000km - well before limit of kms, but changed due to age - a testament to the care this car's received. We test drove this car and found it drives very well, giving good strong power throughout the rev range. Driving out of our yard, which is quite bumpy, we noted that there were no rattles and squeaks to be heard. When driving on the open road, the car felt tight and unused. Brakes pulled the car up well with no signs of warpage, as is often common on older cars. Clutch has plenty of bite remaining. Felt very smooth. Drives like a near new car. Spec. like this is very sought after, so an example such as this is not expected to depreciate significantly. Rev 4 MR2 T-Bars are what MR2 enthusiasts would most like.
Inclusive of full UK modifications, MOT, UK registration, 6 month's road tax, 12 month's comprehensive warranty a full vallet, Now arrived to UK and on display at the Canterbury site available for viewing by appointment. A deposit of £1,000 reserves this unique example. Contact us for further details on this MR2, or to obtain full information on how we can source your specific MR2 requirement. Newera Imports. Consistently recommended by members of the International MR2 Owner's club as the best source of rare specification top condition late model MR2 Turbos.